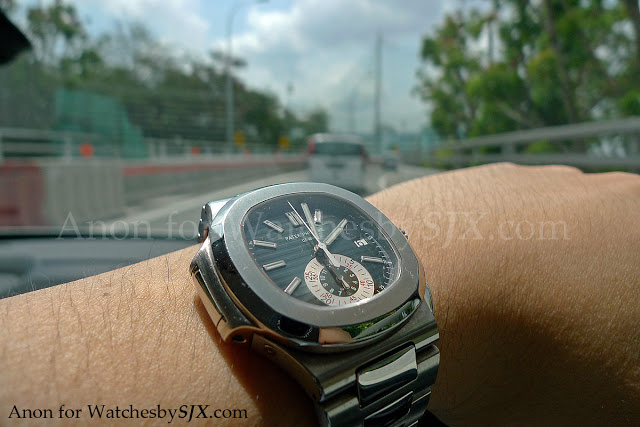 An owner of the Patek Philippe Nautilus Chronograph Ref. 5980/1A – the brand’s only sports chronograph – shares thoughts on the timepiece. “I like sports watches. Not that I actually use them for sport, I have a G-Shock for that. But they are useful and practical for everyday wear. Legible, waterproof and the bracelet is convenient.

The Patek 5980 is not too big and also slim for a chronograph. Therefore it appears sporty and masculine, yet refined. It is quite a rare combination in this type of watch.

As a sports watch, I like the chronograph version of the Nautilus. I like it more than the time-only version 5711 or even the 5712 calendar which are slim and almost formal.

Its competitors, in my mind, are the AP Royal Oak, maybe the Offshore; the Vacheron Overseas; Breguet Marine; maybe Hublot. None of them have movements as interesting as the Patek. The AP is as good as the Patek, maybe a bit better, in terms of case finishing and construction, but the movement is a Piguet 1185. Same for the VC; the 1185 is refined but a bit common.

It is true the Patek costs more than all its competitors. Though I feel it is disproportionately more expensive, based on what it is, it is still much better than the rest, so there is really no other alternative.

The Patek is well finished inside and out, in my amateur opinion. The case finishing is excellent, and is the bracelet. Lots of polished and brushed surfaces that meet at well defined, sharp edges. Case and bracelet edges are bevelled and polished. That being said the bracelet itself is a weakness in my opinion. While nicely finished it is a bit thin for the big watch head. And the clasp, especially the stamped metal safety catch, is the type of clasp you expect on a 1980s or 1990s watch. And the clasp is also quite stiff. When new it was a real pain to pull open. I do like the look of the bracelet, though the rounded, pebble-like centre links pick up scratches very easily because of the mirror finish.

Some have said the chronograph spoils the clean design of the original Nautilus, especially with the buttons sticking out the side. But I like the sporty flavour the chronograph gives the watch. Patek designed the chrono pushers very well; they are curved yet large, and suited to the style of the watch.

The chronograph buttons are a bit stiff in operation. They don’t have a refined click like the high-end manual wind Patek chronos. Not a big deal but I would have expected a bit more.

I also like the dial design and colour (I don’t like the new black dial Nautilus chrono). Unlike many of the newer Patek with enormous letters the brand name on the dial is in acceptably small font. The dial is legible and to the point. The date is bigger than normal and easy to read. On the topic of the date, it is adjusted via a pusher on the case. That’s because this is the same calibre as the 5960 chronograph with annual calendar. This is inconvenient since you need a pushpin or toothpick. I prefer date adjustment via crown. Speaking of hands, I dislike the centre seconds hand in sandblasted silver. I find it looks flat and cheap, compared to the hour and minute hands which are polished and rounded.

As for the movement the finishing looks excellent to my untrained eye, like I said it’s the most refined sports chronograph. The bevelling of the bridges is nicely done especially. However the finishing is not the same as the manual wind Patek chronographs. For example the chronograph levers are brushed rather than black polished. And there are minor shortcomings in finishing, like the perlage on the centre part of the rotor that is not evenly spaced.

This watch is automatic and the winding is very audible. It makes a “zip” noise when the rotor spins. It’s actually quite a pleasant noise so I don’t mind at all.

So in short, I love this watch, despite its imperfections.

Apologies for the lousy photos. I’ll leave it to [SJX] to take better pics!”

At Baselworld Patek Philippe unveiled the Nautilus Ref. 5711/1R, the first time the time-only Nautilus is available in gold with a matching bracelet.