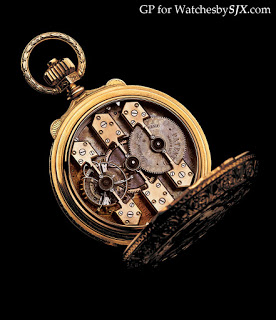 Share Facebook Linkedin Twitter Pinterest Weibo Mail Instagram
To celebrate its 220th anniversary, Girard-Perregaux (which was recently acquired by PPR) will hold a series of exhibitions around the world, including stops in Singapore and New York, to show watches from its museum, including the famous Esmeralda Three Gold Bridges pocket watch.
I was fortunate enough to actually seen and hold the Esmeralda; it is larger and heavy than it looks and though it’s clearly old the movement is beautiful. The exhibition schedule is as follows: The travelling exhibition:• Singapore – Art and Science Museum – from 16th to 18th September 2011 • Shanghai – Sinan Mansions – from 20th to 23rd October 2011 • New York – Boutique Girard-Perregaux on Madison – from 18th to 26th November 2011 Other timepieces from the museum: • In a dedicated space of the Printemps Haussmann in Paris, from 25th August to 8th October 2011 Together with exhibitions organised by the Fondation de la Haute Horlogerie:• Mexico – Salón Internacional Alta Relojería – from 4th to 6th October 2011