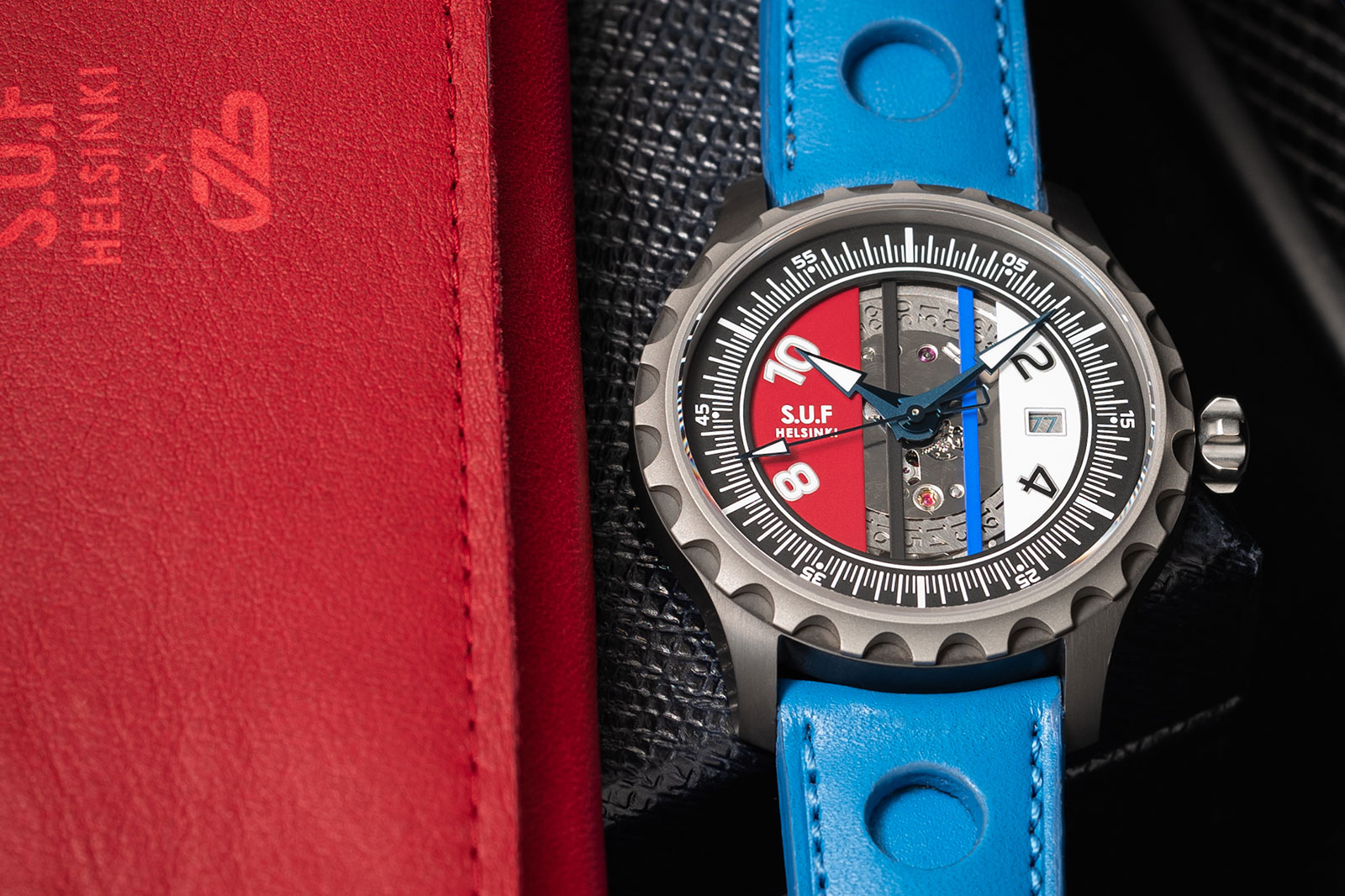 Finnish through and through, Sarpaneva and its affordable sub-line S.U.F. Helsinki often turn to their native land for inspiration, as with the glow-in-the-dark Gothic fantasy of the recent Nocturne. Now S.U.F. is celebrating Valtteri Bottas, a Formula 1 driver nickname the “Flying Finn” who now races for Alfa Romeo.

The S.U.F Flying Finn is a pair of limited editions created in collaboration with Mr Bottas. The first is the VB77 in red and white that’s named after the driver’s car number, while the second is the FF-S dressed in white and silver. Both share a partially open dial that’s a first for an S.U.F. wristwatch. 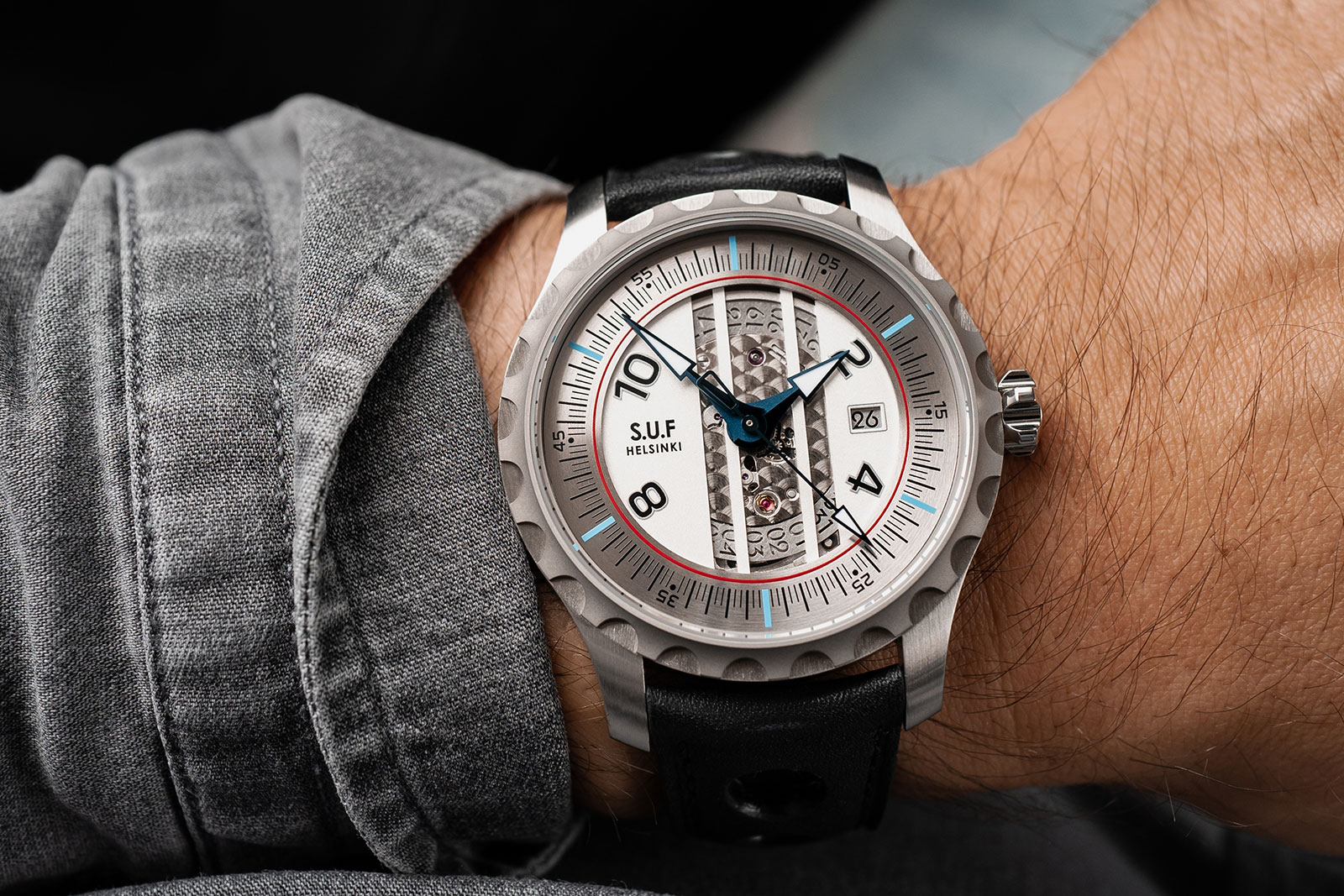 I’m not generally a fan of watches with racing stripes – and I didn’t warm up to earlier S.U.F watches with stripes – but the Flying Finn aesthetic works. In fact, it’s one of the few watches with an exaggerated racing look that works. The red-and-blue VF77 with its DLC-coated case is especially striking. 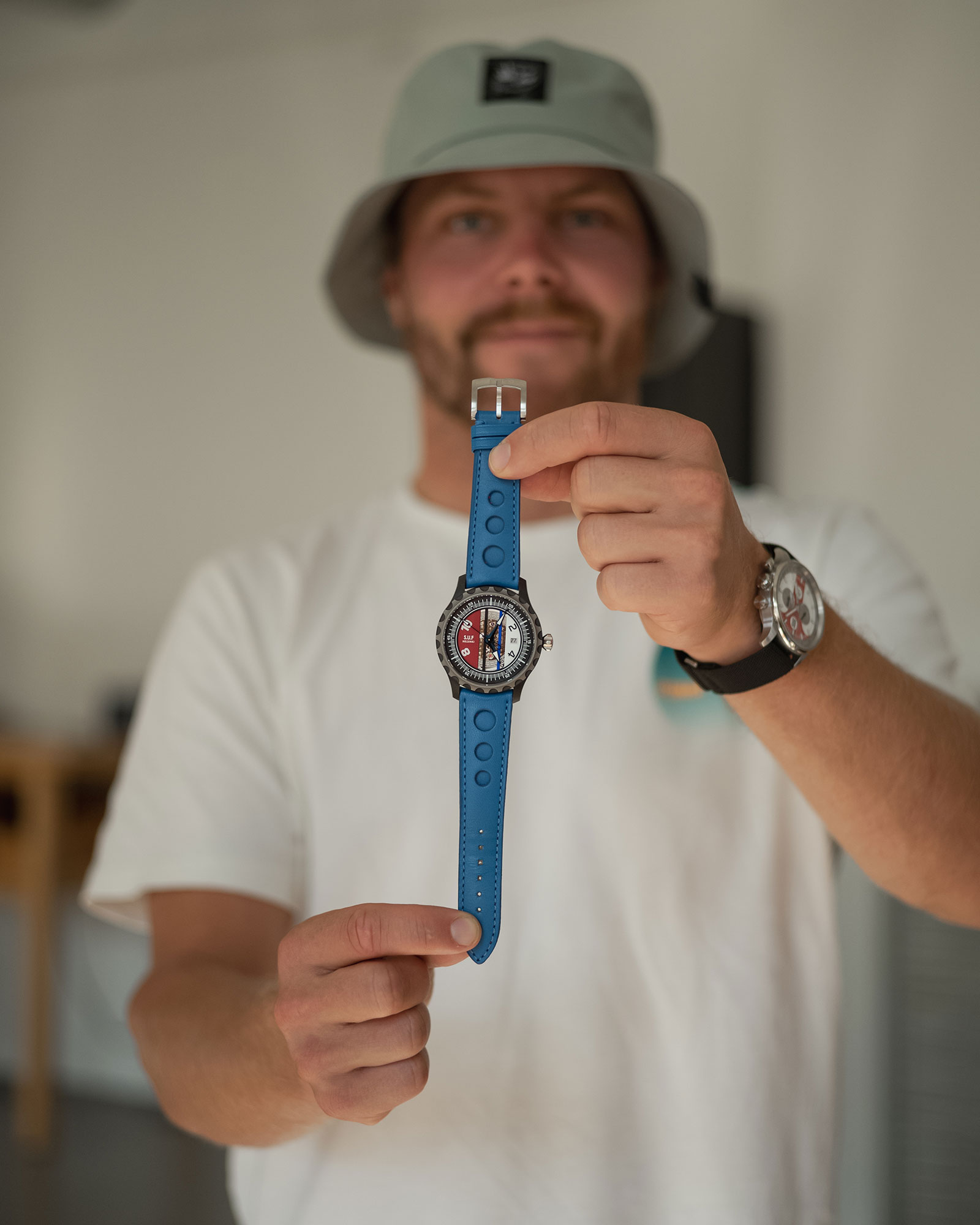 Mr Bottas with the VB77

The success of the design perhaps because of the partially-open dial along with the “bottle cap” bezel. And the tangible features of the watch also helps. Both models have the typical S.U.F. appeal, namely a highly quality case and well-made dial, along with an affordable price tag.

That’s relative, however, as the Flying Finn editions cost about double the entry-level 180 from S.U.F. that contains the same movement but inside a simpler case with a plainer dial. 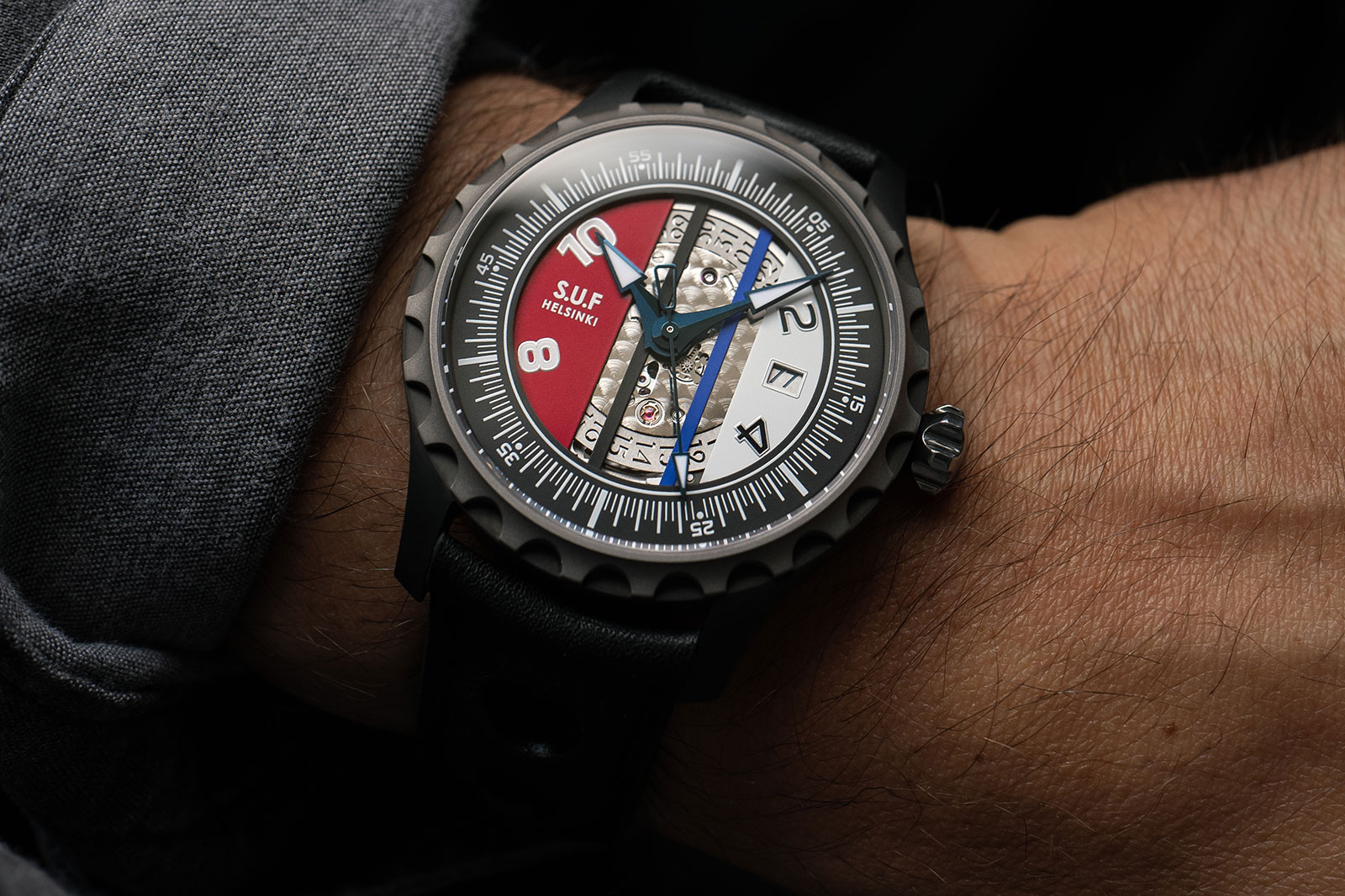 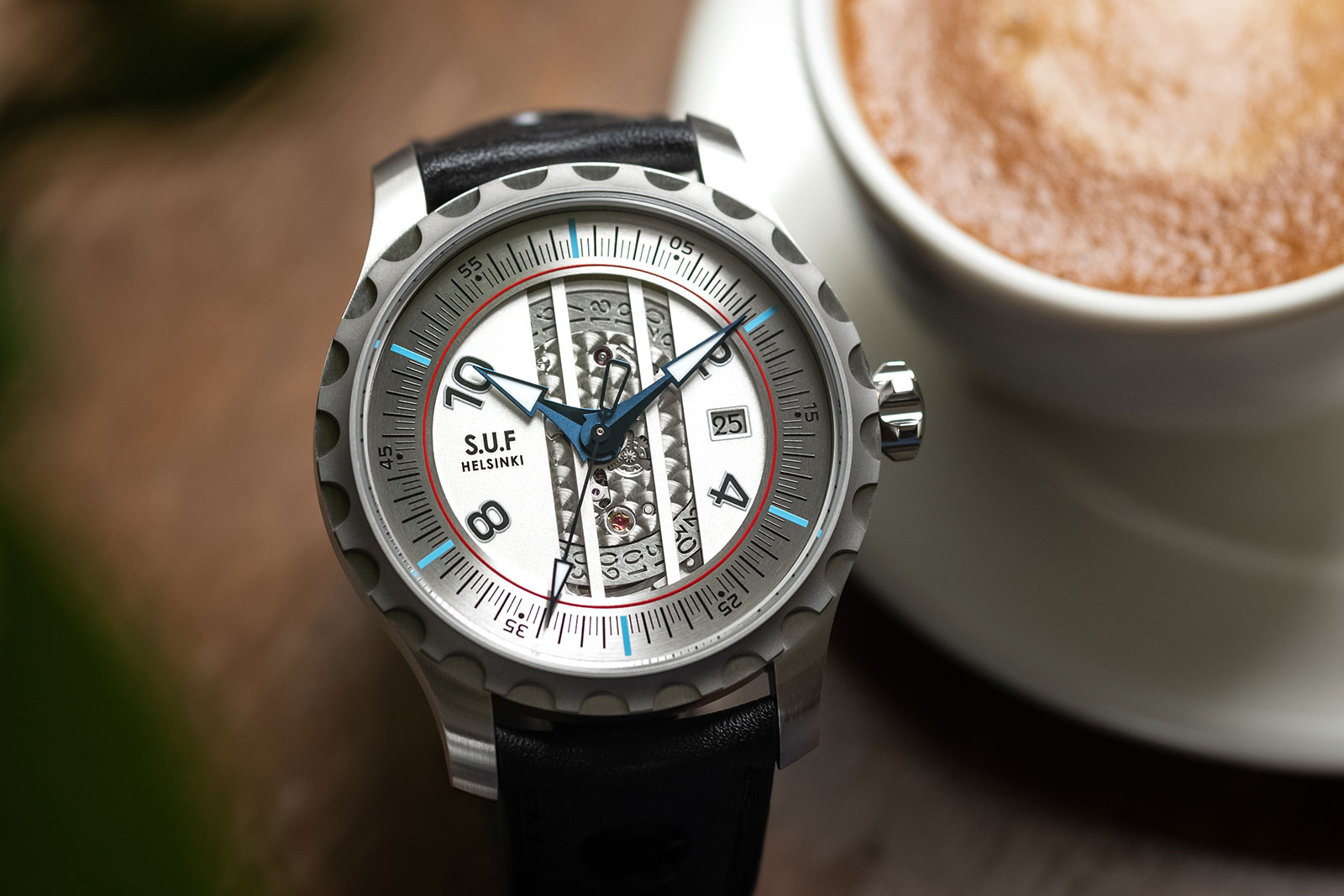 Both Flying Finn editions share the same basic specs. Characterised by a prominent notched bezel, the case is a wide 44 mm but thin at just over 9 mm high. While the VB77 has a diamond-like carbon (DLC) coating that gives it a charcoal finish, the FF-S has a matte brushing on the natural steel finish.

Notably, the case is a new design for S.U.F., which previously relied on a smaller, simpler case with a smooth bezel. The notched bezel evokes the fancier cases of Sarpaneva, which sells watches in a far higher price segment. 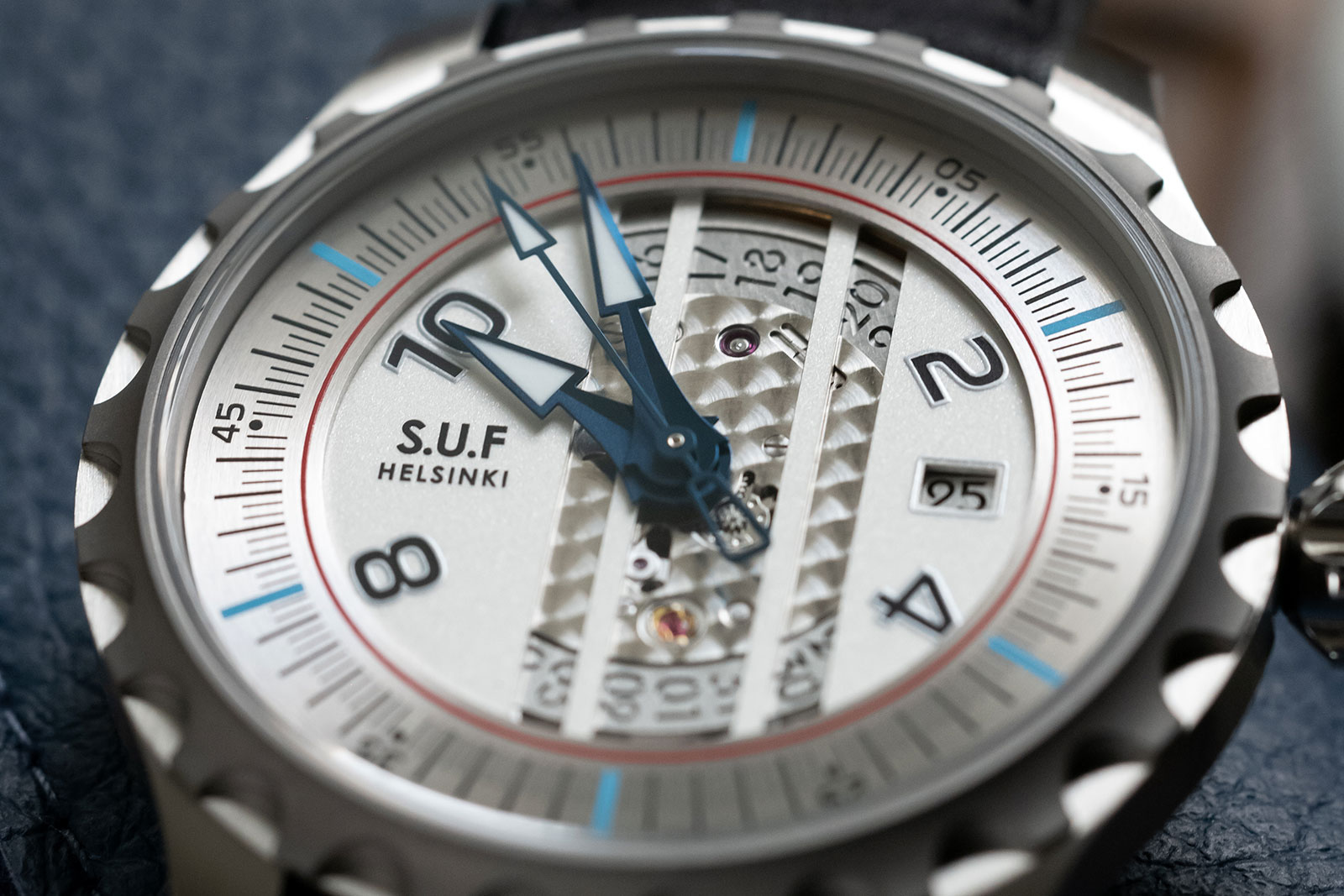 Also notable is the open-worked dial that has three vertical apertures. These form racing stripes and offer a peek into the mechanics, revealing the base plate and date wheel of the movement. The FF-S has a white dial with blue numerals, while the VB77 has a three-colour dial in red, blue, and white. In typical Sarpaneva style, the standard date wheel has been replaced with the brand’s own that has open-worked date numerals. 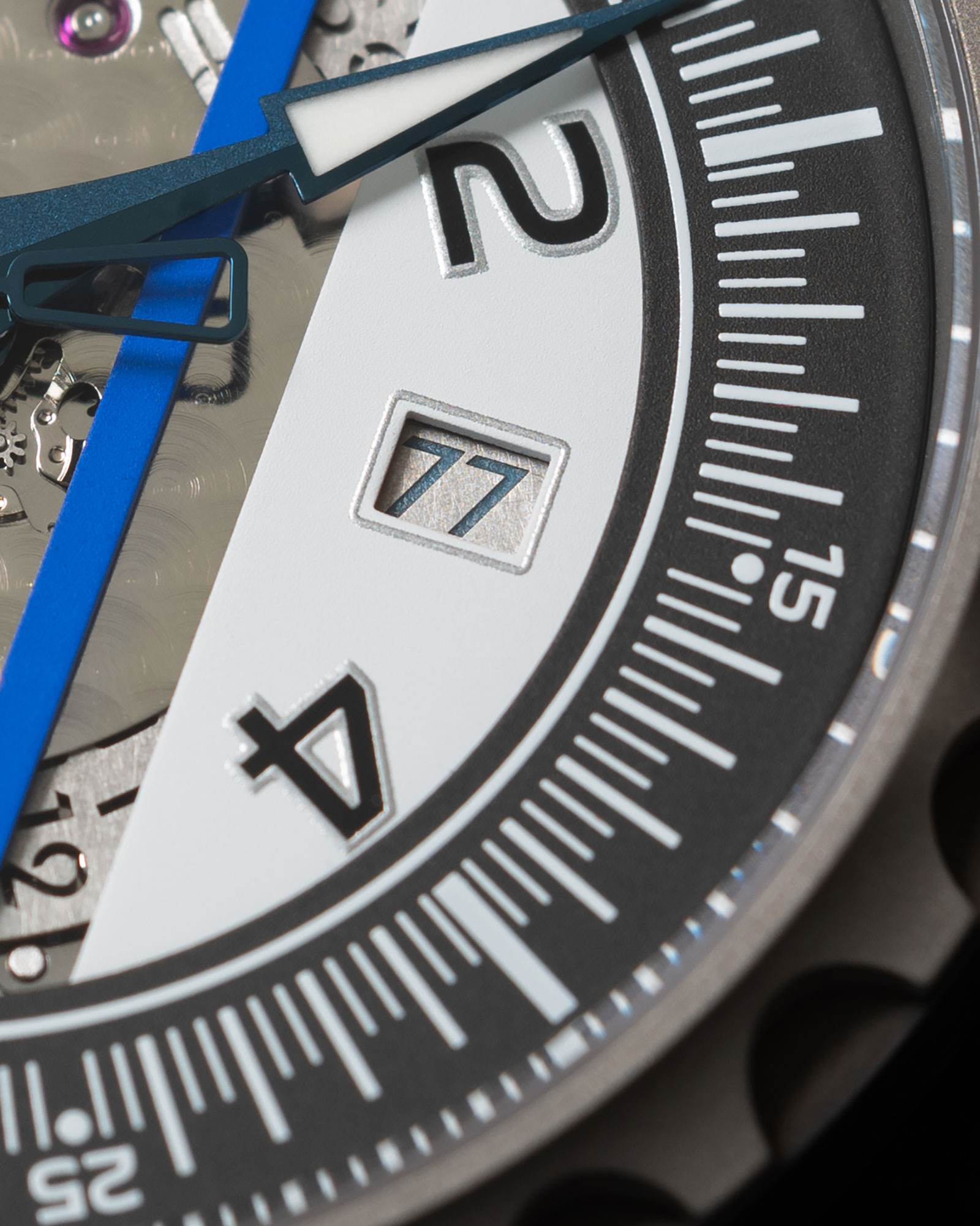 The movement is inside both is the A10, a workhorse calibre found in almost every Sarpaneva and S.U.F. model. Conceived by the movement manufacturer Soprod as an alternative to the ETA 2892, the A10 is based on the architecture of the Seiko 4L calibre but now made in Switzerland. 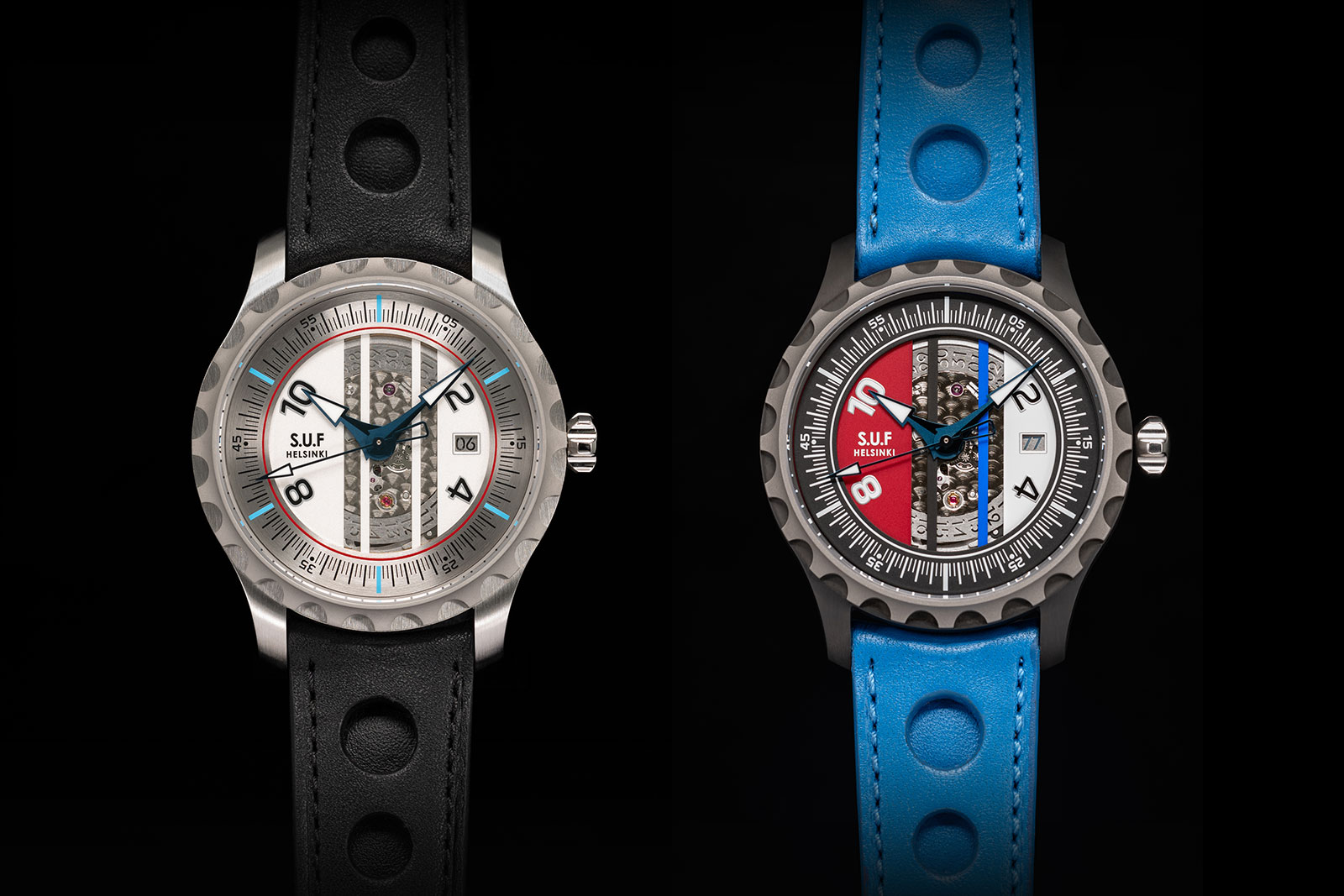