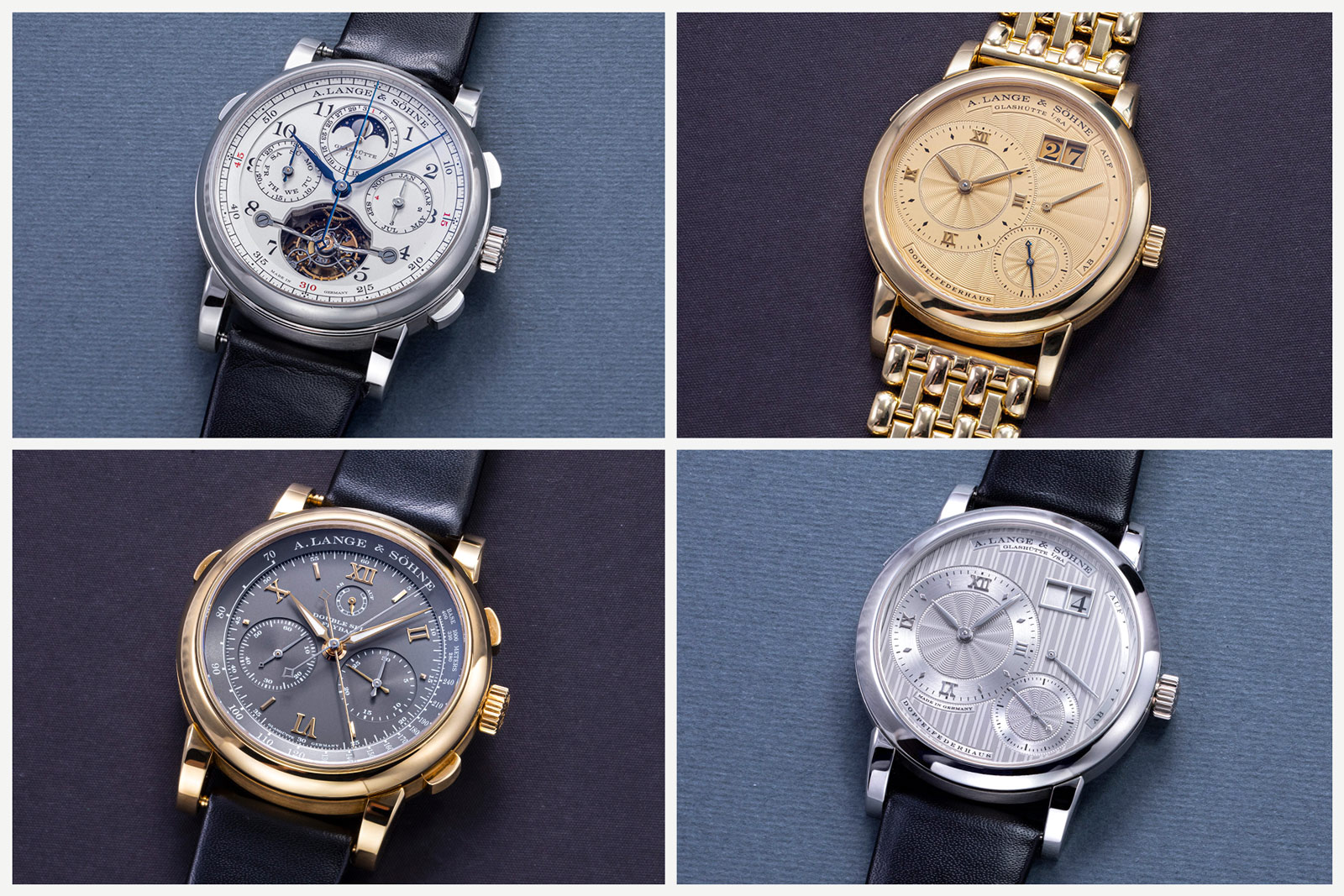 We covered the independents and complications at Phillips’ Hong Kong auction thats happens on May 27 and 28, so now we look at highlights from a recent crowd favourite: A. Lange & Söhne.

Revered for its high-quality movements and impeccable quality, the modern-day brand has only been in operation since 1994 but has managed to build a diverse body of work. A good selection is on offer in the auction, ranging from the mega complications to the simple (albeit not particularly affordable today).

Here we round up six limited edition Lange watches in the sale, including a pair of rare Lange 1s to the second-most-complicated Lange ever made, the Tourbograph Perpetual Pour le Merite, along with a pair of Handwerkskunst editions. 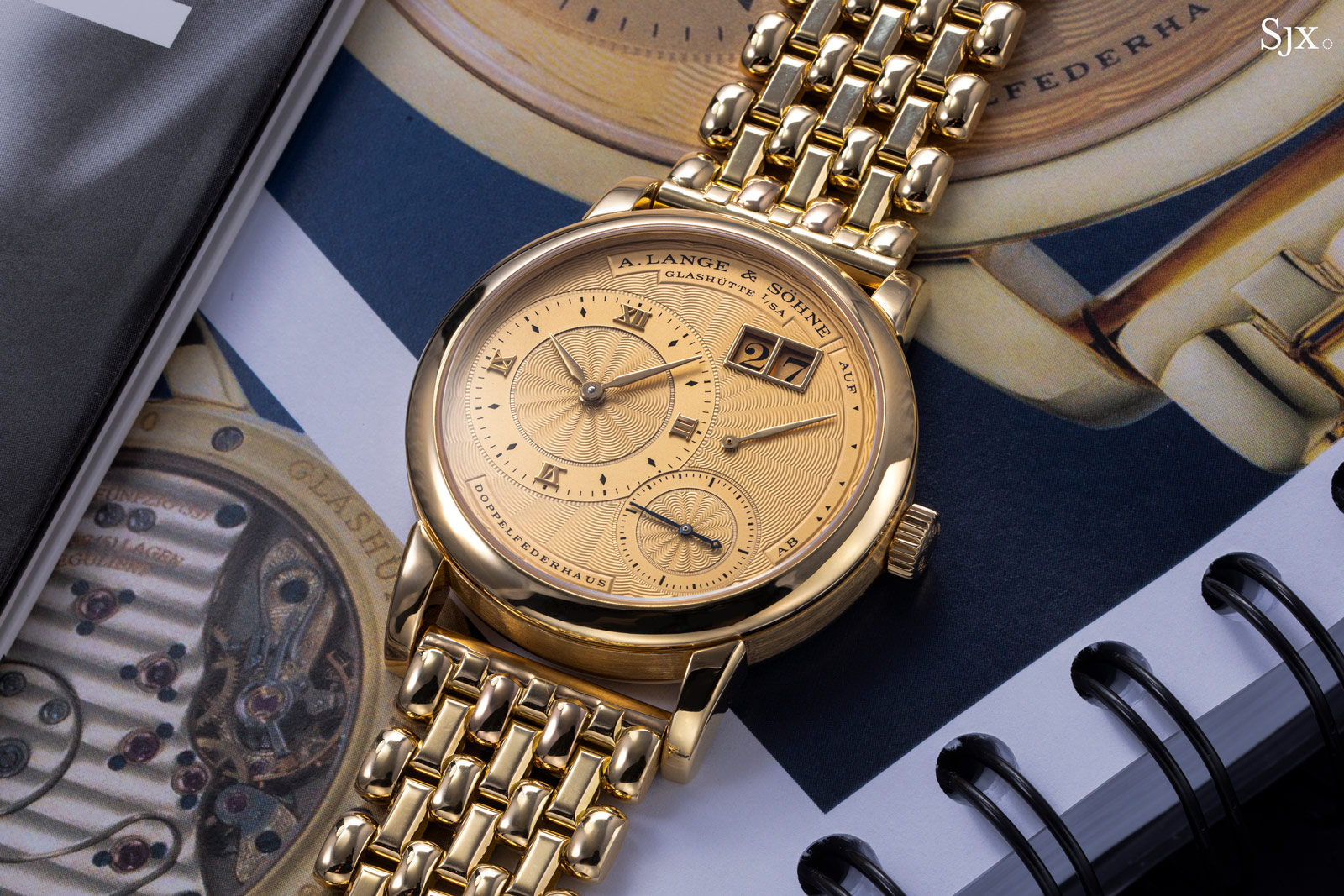 Since its debut in 1994, the Lange 1 has become an icon of the brand that remains relevant today. After almost three decades, the concept of the watch and its design essence remain intact. Only few other watches have attained such cult status, putting the Lange 1 alongside timepieces like the Calatrava and Royal Oak. 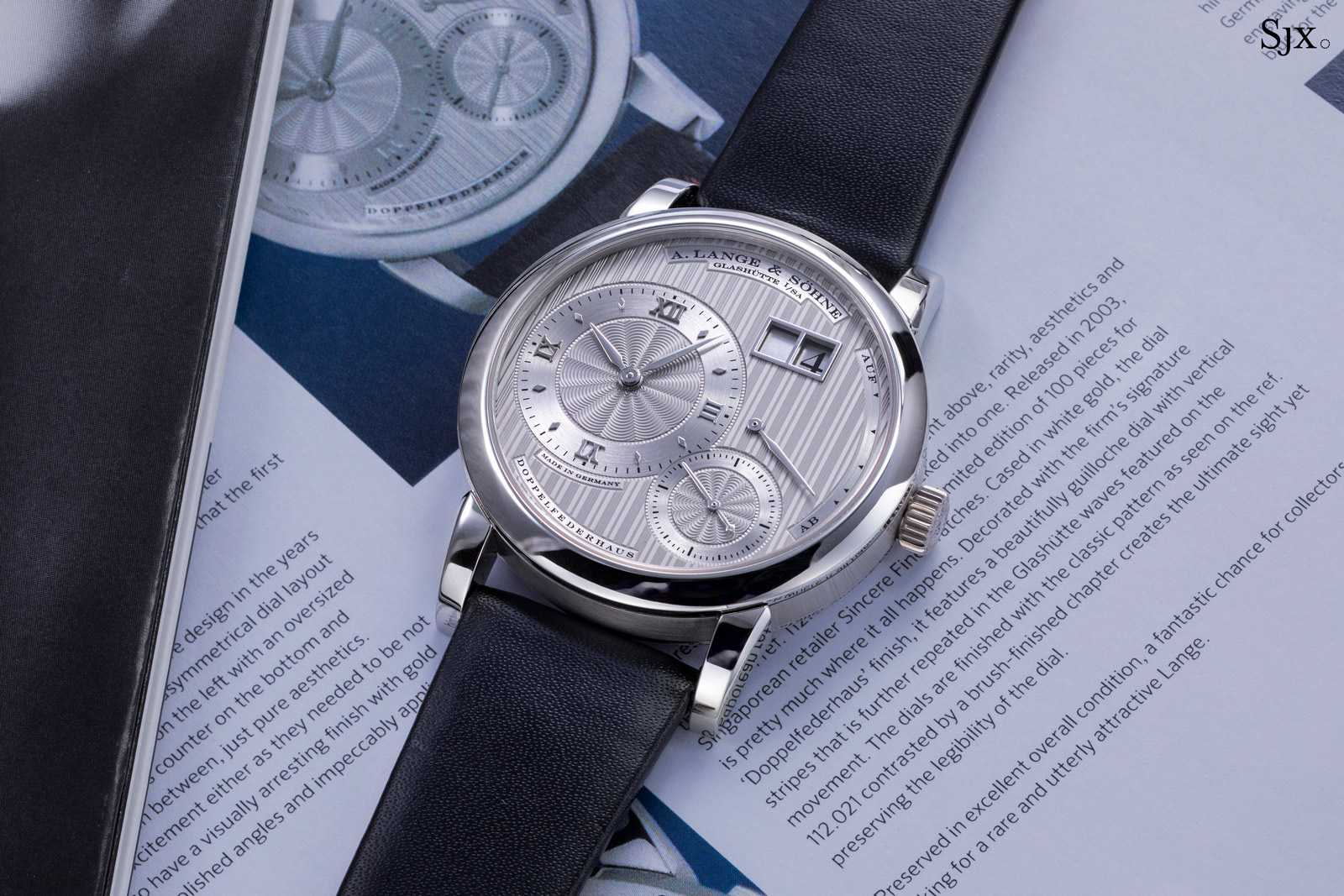 The present example is a limited edition of only 100 pieces produced in 2003 for Singaporean retailer Sincere. The dial is extremely unusual as it features two different guilloche patterns, instead of the typical smooth opaline finish found on most Lange 1 watches. Even other Lange 1 models with guilloche, like the vaunted Lange 1A, usually have only a single guilloche pattern.

The dial is adorned with pinstripes while the sub-dials have the same radial pattern found on the standard Lange 1 guilloche dials. This combination, along with the concentrically brushed chapter rings results in an unusual, ornate look that is unexpected for a Lange but one that still maintains the dial’s legibility. 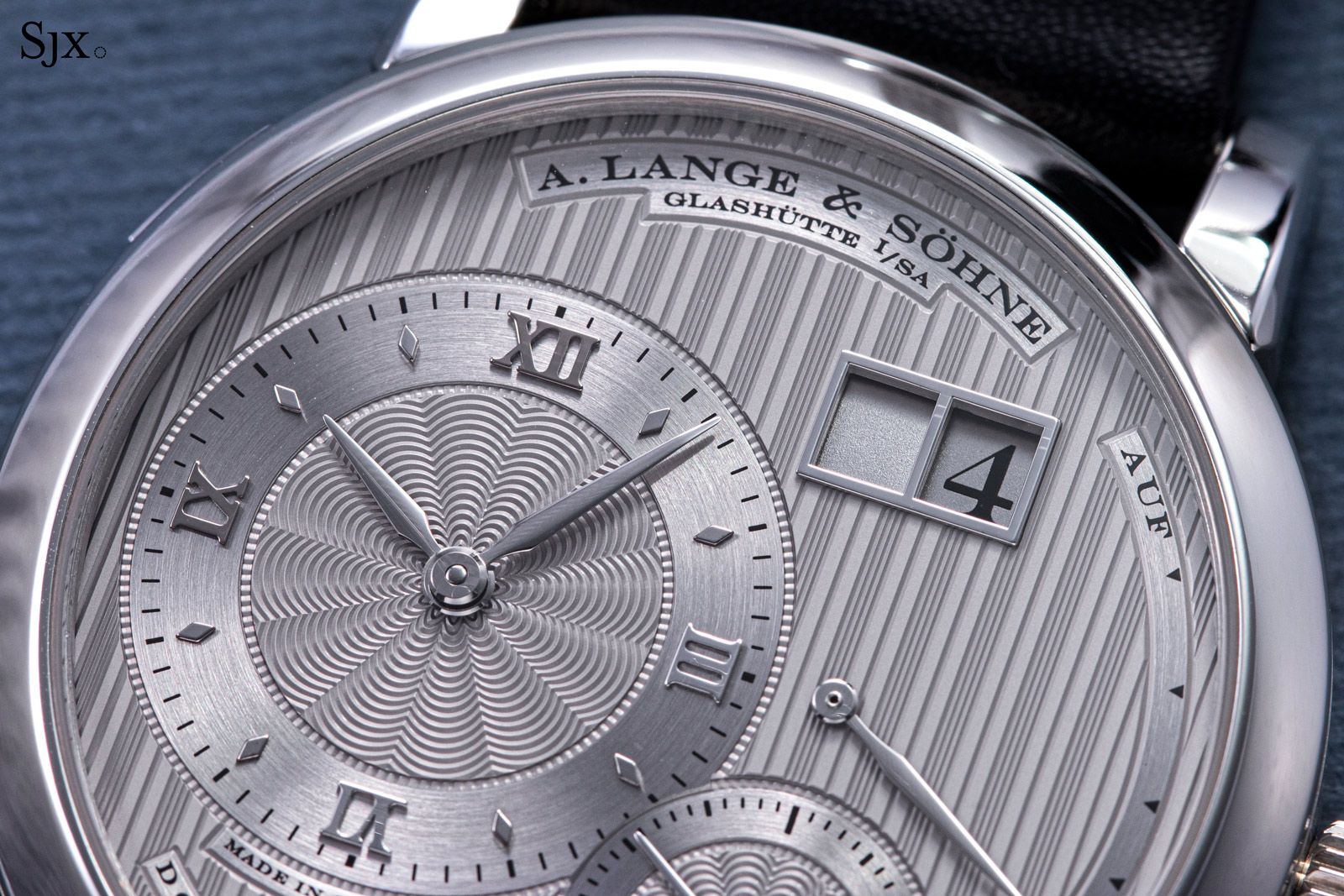 The case back reveals the caliber L901.0 that is no less interesting than the dial. Finished with Glashütte stripes, the German silver three-quarter plate forms a lustrous backdrop for the gold chatons, red jewels, and blued screws. 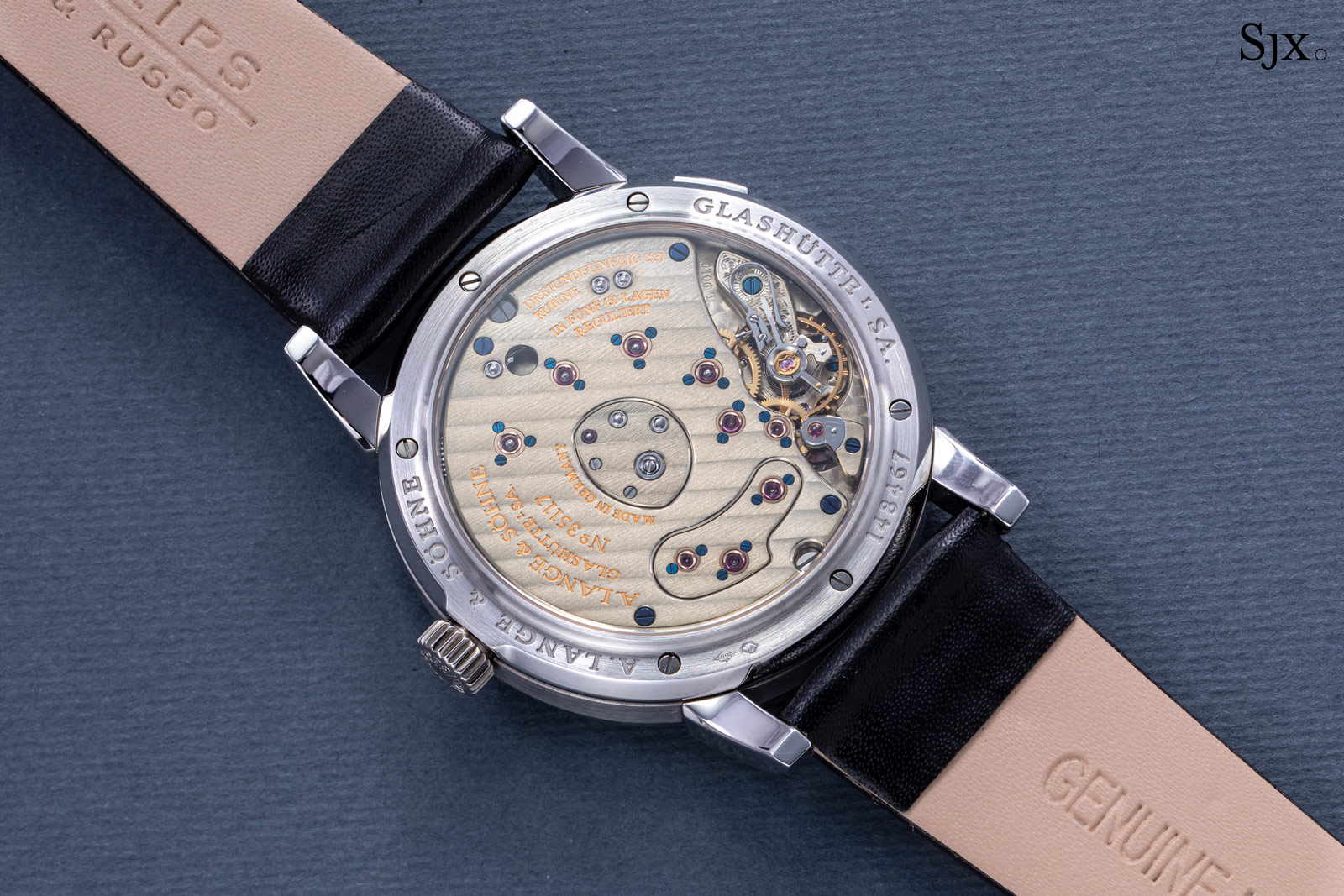 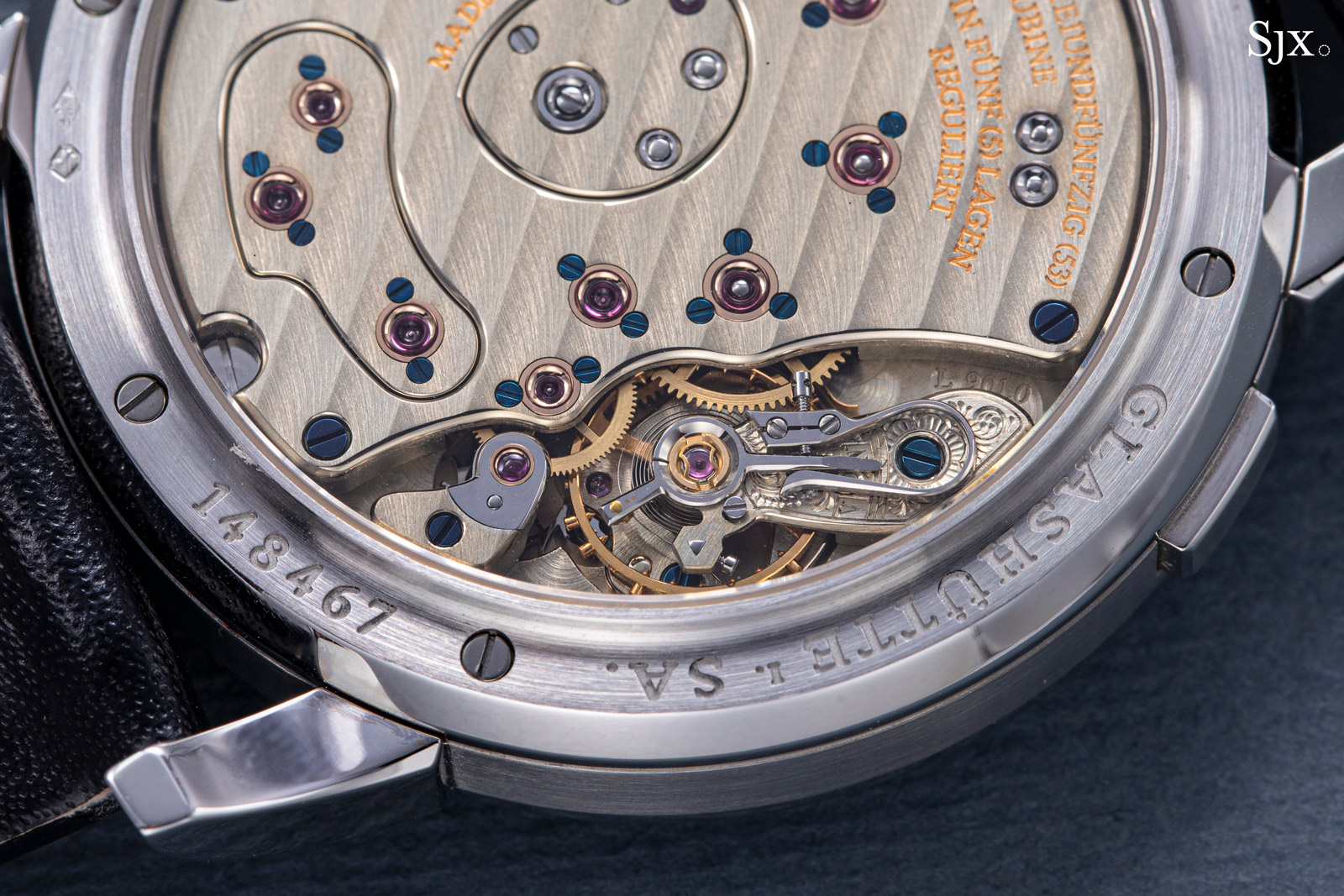 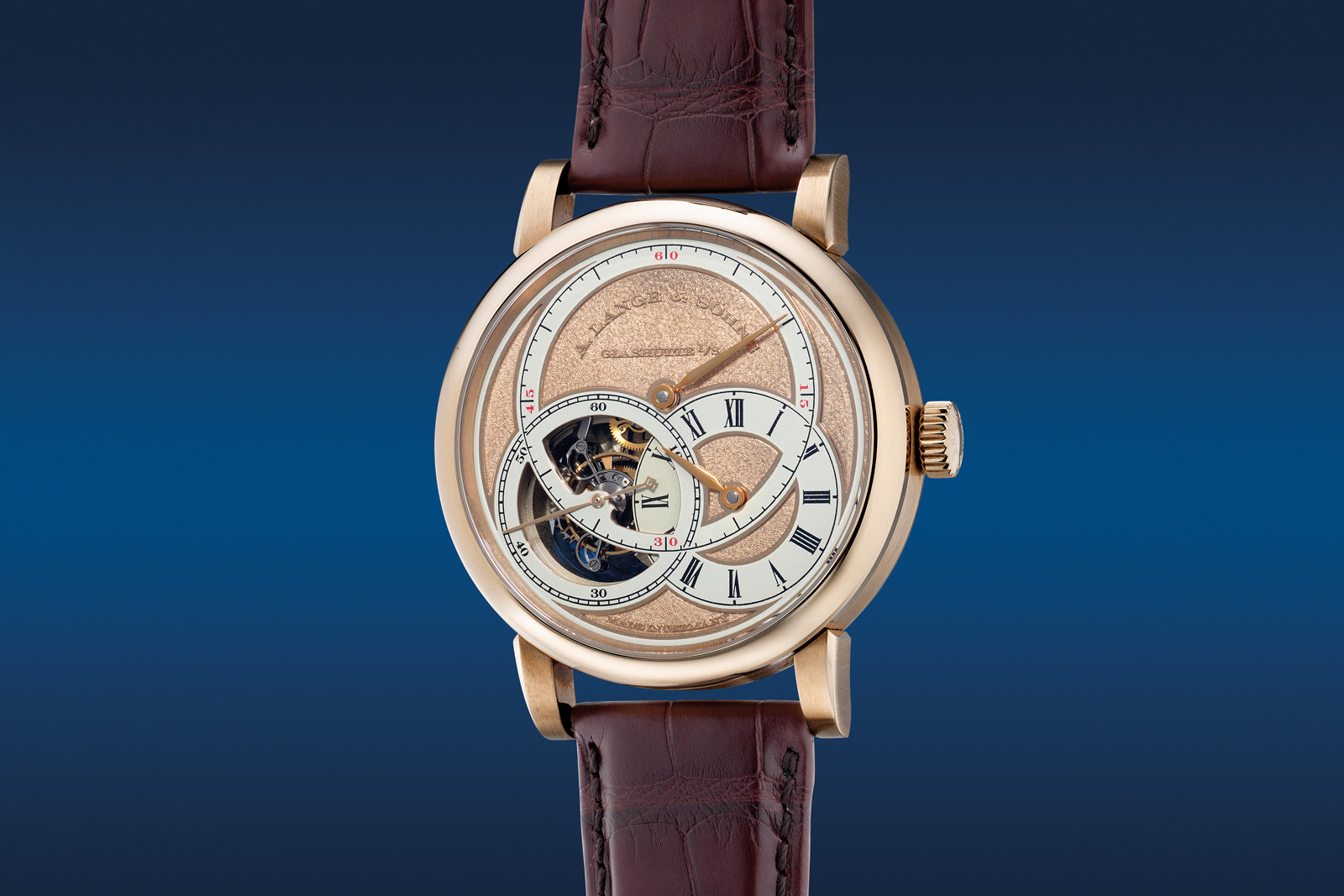 It has a case of Honey Gold – Lange’s proprietary gold alloy – that contains a movement with several of the brand’s signature complications, including a fusee-and-chain transmission. That alone comprises 636 parts, with each of the links being hand assembled with rivets.

The distinctive dial layout was inspired by pocket watch no. 93 made by clockmaker to the Royal Saxon court Johann Heinrich Seyffert, which featured a regulator-style dial laid out in exactly the same fashion. Here one of the rings in the Venn diagram-like dial is occupied by the tourbillon. And the hour display located at four o’clock has a ingenious retracting disc that only emerges between eight and 10 o’clock, ensuring that the view of the tourbillon is unobscured at all other times. 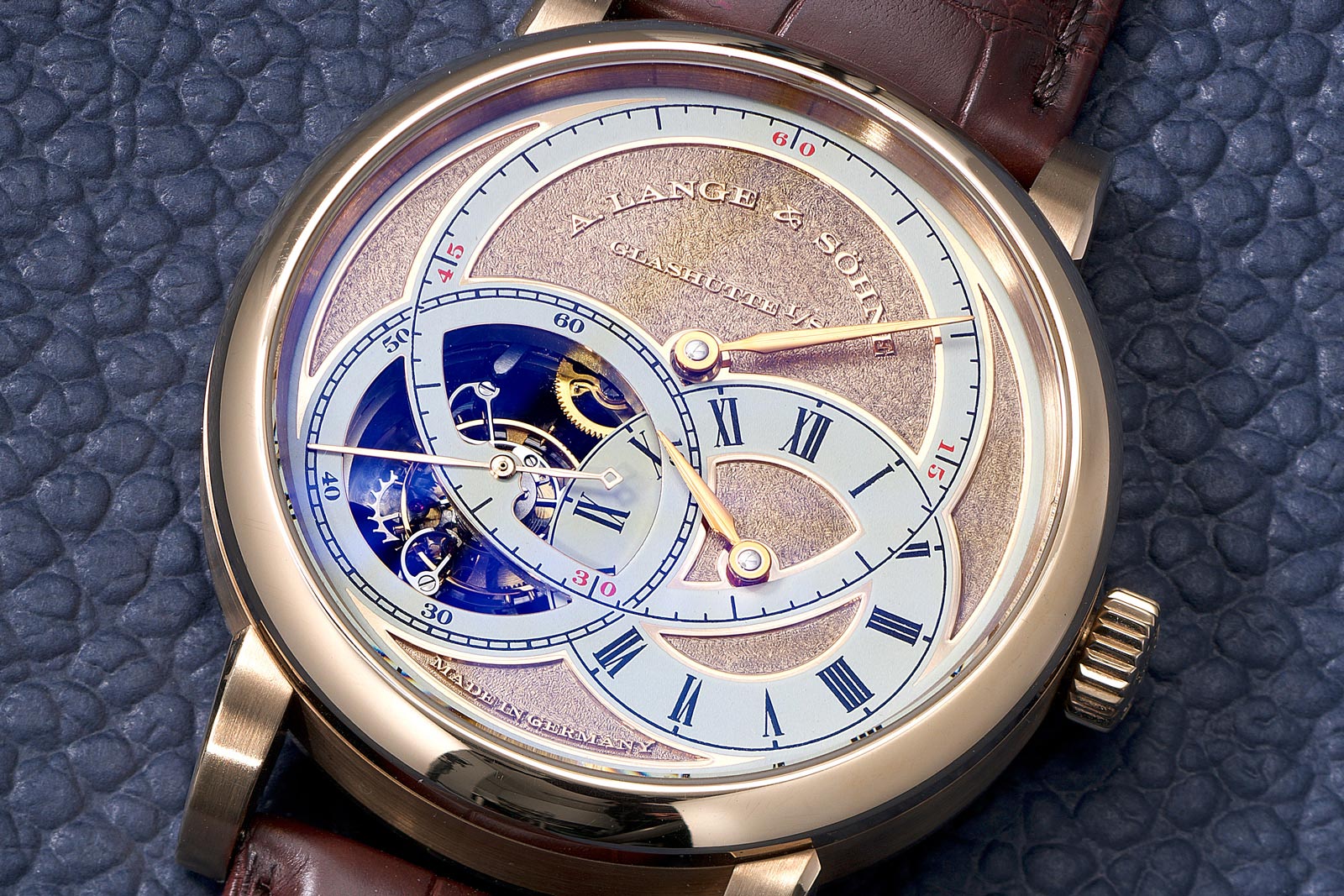 But the key feature of this watch is that it’s a Handwerkskunst model. That means the handcrafted decoration on the front and back is elaborately executed to an extremely high standard. This is evident on the tremblagedial that is hand decorated by an engraver who laboriously uses a burin to create numerous tiny divots on the dial, creating the granular finish. Much attention has also been lavished on the movement, resulting in s the elaborately engraved tourbillon bridge and the complex open-working of the three-quarter plate. 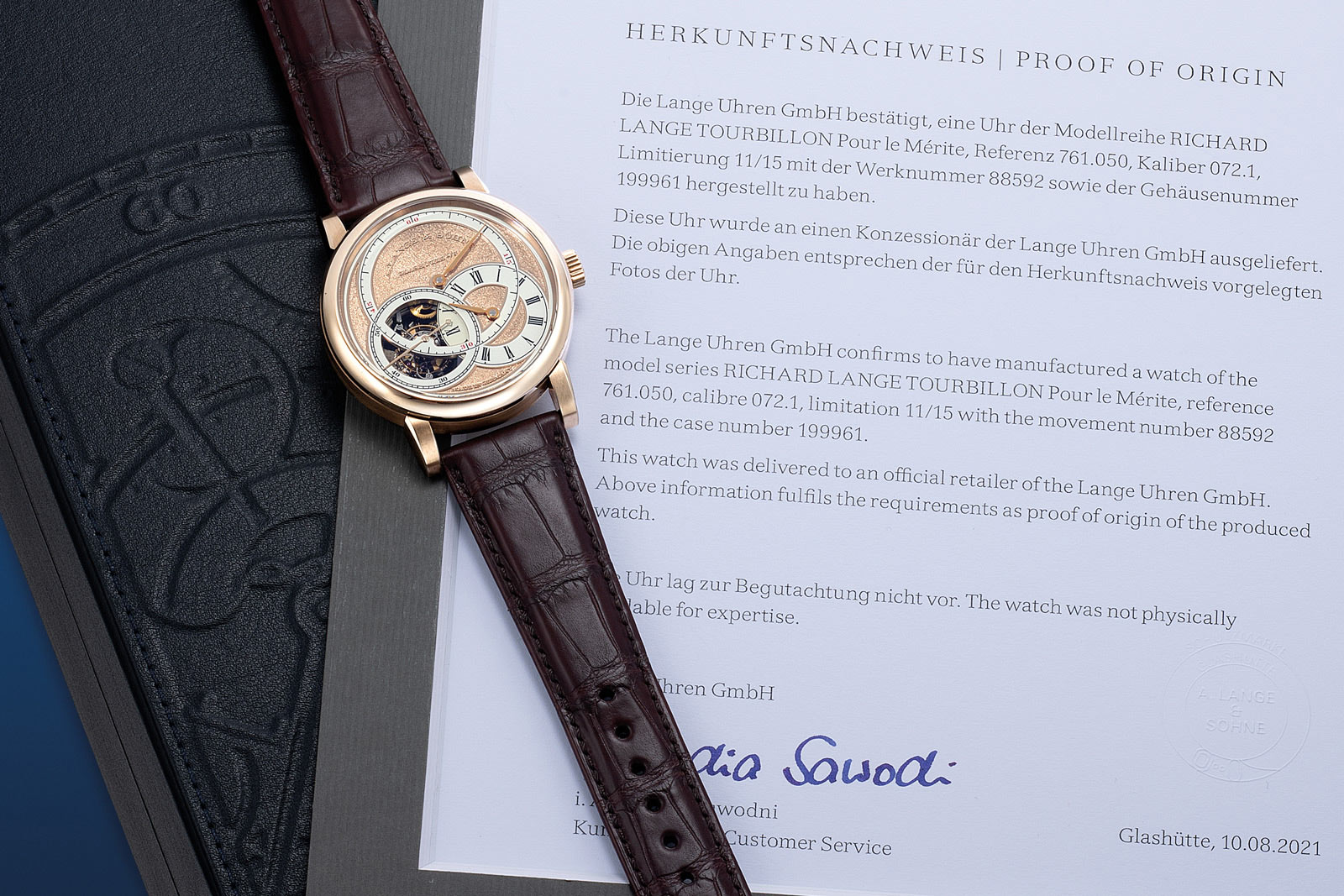 Accompanied by the original box and certificate, this watch is numbered “11/15”. It is perhaps the perfect representation of the aesthetic style and technical innovations of Lange, with the added bonus of a Honey Gold case. This has an estimate of HK$900,000-1.8 million or US$115,000-231,000.

The auction includes another watch from Lange’s covetable Handwerkskunst collection, the 1815 Tourbillon Handwerkskunst launched in 2015. A limited edition of only 30 watches, it made its debut in the same year as the 200th birthday of the birth of Ferdinand-Adolph Lange. 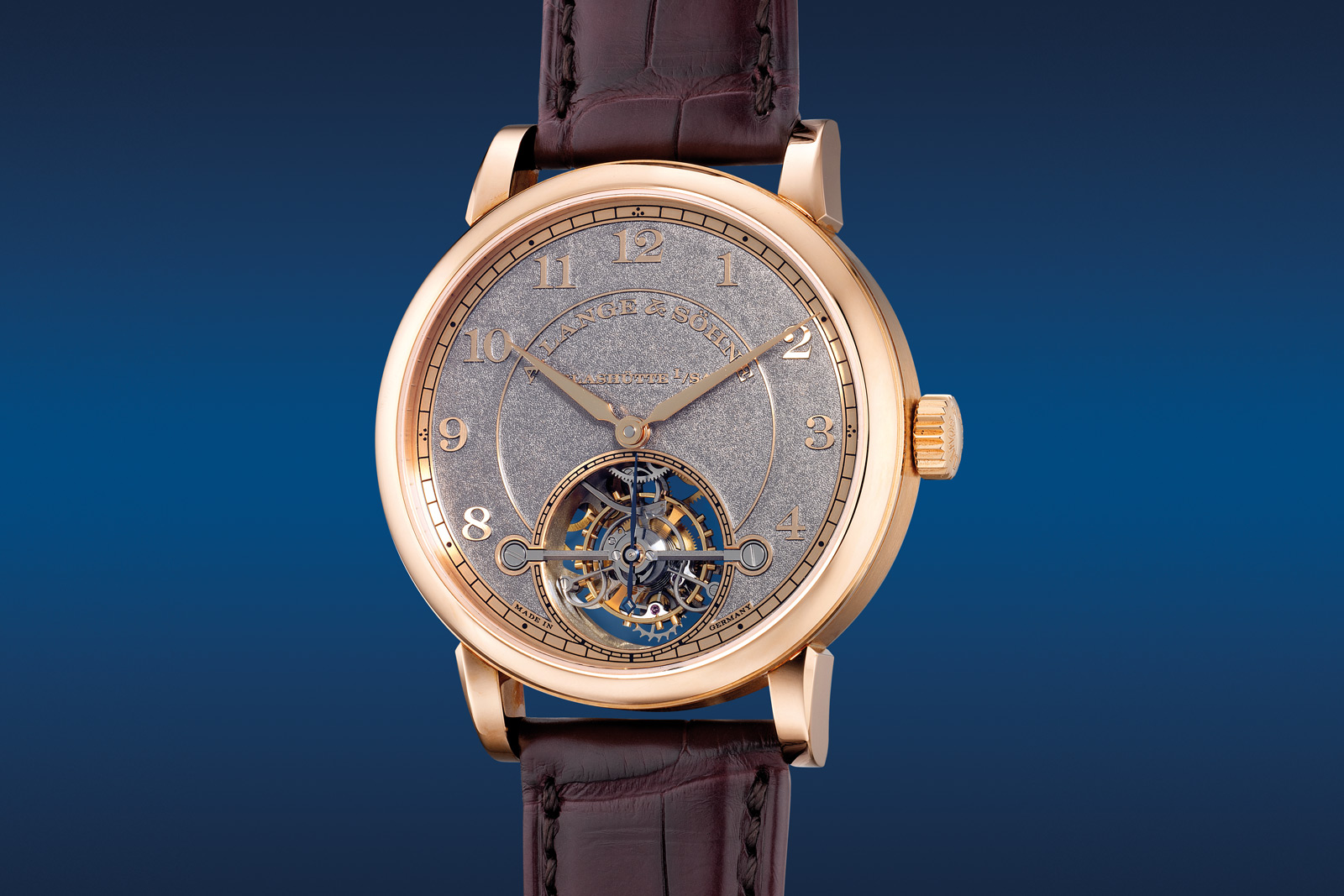 Perfectly executed in all respects, the 1815 Tourbillon Handwerkskunst features a hand-engraved tremblage dial like several other watches in the Handwerkskunst series. But its dial has the added complexity of having both a relief brand signature under 12 o’clock as well as relief hour numerals.

Despite its relatively simple front, the movement is technically interesting. The manually-wound L.201.1 inside incorporates a tourbillon with hacking, zero-reset function – pulling the crown to set the time stops the tourbillon and sends the seconds hand to the 12 o’clock position. The three-quarter plate in German silver is finely frosted and hand engraved, while also having especially refined finishing thanks to its intricate outline and open-worked segment above the barrel. And in typical Lange style, the tourbillon bridges are fully engraved on the back and black polished on the front. The present lot was made in 2009 as a limited edition of only 10 pieces for the Japanese market. It’s a variant of the Double Split that was first introduced in 2004 in platinum with a black dial. This watch in contrast has a yellow gold case and grey dial. 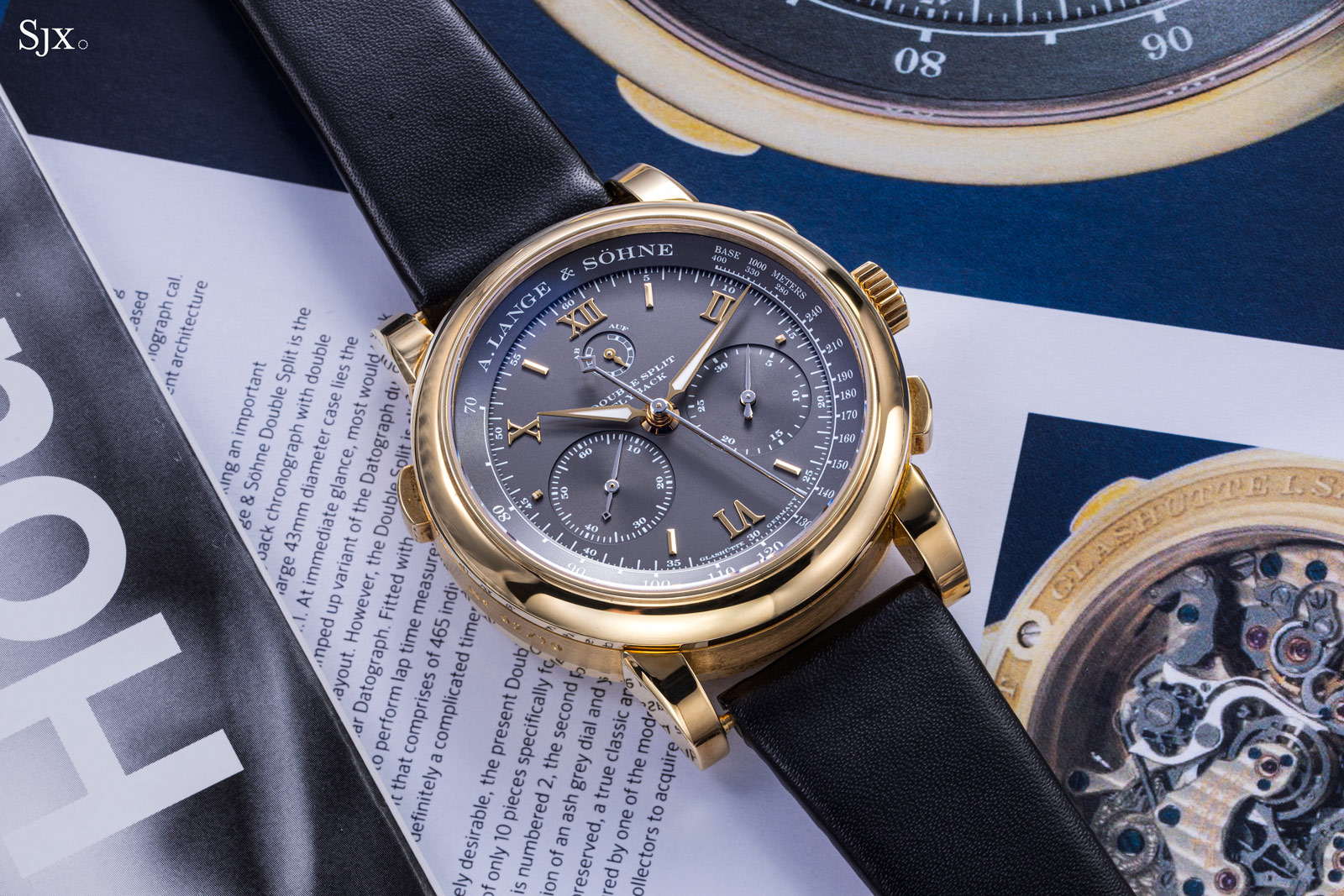 The launch of the Double Split was an important moment in horology as it was the first wristwatch ever to feature a chronograph with a double rattrapante mechanism – the ability to record two simultaneous elapsed times of up to 30 minutes.

As a measure of its complexity, the L001.1 of the Double Split has 465 components, almost double that of the Datograph, which is a flyback chronograph with a big date. But as is the norm for Lange, the movement is not merely about technical excellence but also decorative beauty. All components are finished to an extremely high standard. It has the requisite striped German silver three-quarter plate, blued screws, rubies in chatons, and enhanced by the straight-grained and bevelled steel parts of the chronograph mechanism. Numbered “2/10”, this watch is well preserved and includes all accessories, such as the guarantee booklet that indicates it was sold by the Lange boutique in Tokyo in July 2009. The case even exhibits gentle oxidisation, implying that it has been rarely worn. It has an estimate of HK$625,000-1.25 million, or US$80,100-160,000.

The most complicated Lange in this auction – and the second most complicated Lange watch ever made – the Tourbograph Perpetual Pour le Merite was a follow-up to the original Tourbograph of 2005 that combined a tourbillon and split-seconds chronograph. With the addition of a perpetual calendar, it arrived in 2017 as a 50-piece edition in platinum, which was followed by a 50-piece edition in Honey Gold. This example is one of the 50 in platinum and dates to 2020. The Tourbograph traces its roots to the original Tourbillon Pour le Mérite of 1994, which was the first-ever wristwatch tourbillon to incorporate a fusee-and-chain transmission.

But the Tourbograph Perpetual “Pour le Mérite” goes even further by adding on a split-seconds chronograph and perpetual calendar. The L133.1 within is made up of 684 components, counting the chain as a single part (but the chain is actually made up of 636 links rivetted by hand). Unsurprisingly given all those complications, the movement is a sight to behold. Turn the watch over and all is revealed. To say the intricate density of parts and high level of finishing is impressive is an understatement. That is all contained in a hefty but wearable 43 mm case of platinum that’s matched with a silver dial featuring Arabic numerals – the quintessential Pour le Mérite look. The peculiar sunken tourbillon bridge that’s unique to this model

The present example is “37/50” and is the first of the model to appear at Phillips. Being just two years old, the watch is well preserved and includes its full set of accessories including an enormous, numbered presentation box.

Released in 1998 as a limited edition of 100 pieces, the Lange 1A is a significant model in being the very first limited-edition Lange 1 as well as the second limited edition introduced by Lange since its re-establishment in 1994 (with the first being the Tourbillon Pour le Merite). The most striking feature of this watch is the dial, which is solid 18k gold as opposed to silver as is convention for Lange. It is decorated with a complex, radial guilloche, albeit one that was engraved with a CNC machine instead of a hand-operated rose engine. However, the dial is still extremely well executed. The date discs, power reserve hand, hour and minute hands are also in gold in keeping with the gilded theme, but the seconds hand is blued to provide an interesting contrast. An intriguing fact is that some examples of the Lange 1A had gold seconds hands instead for reasons now lost to time. The gold elements are also within the watch. Look closely and you’ll realise that both the balance and escape wheel cock are in yellow gold, as is the escape wheel bridge, making this one of the few Lange watches with these components in gold. But this watch has an extra bit of gold to go along, a rare, original bracelet in 18k yellow gold. Although Lange 1s fitted on a bracelet come along every so often, they are still uncommon. And the fact that the bracelet creates a more casual look for what is usually a very formal watch makes it extra desirable.