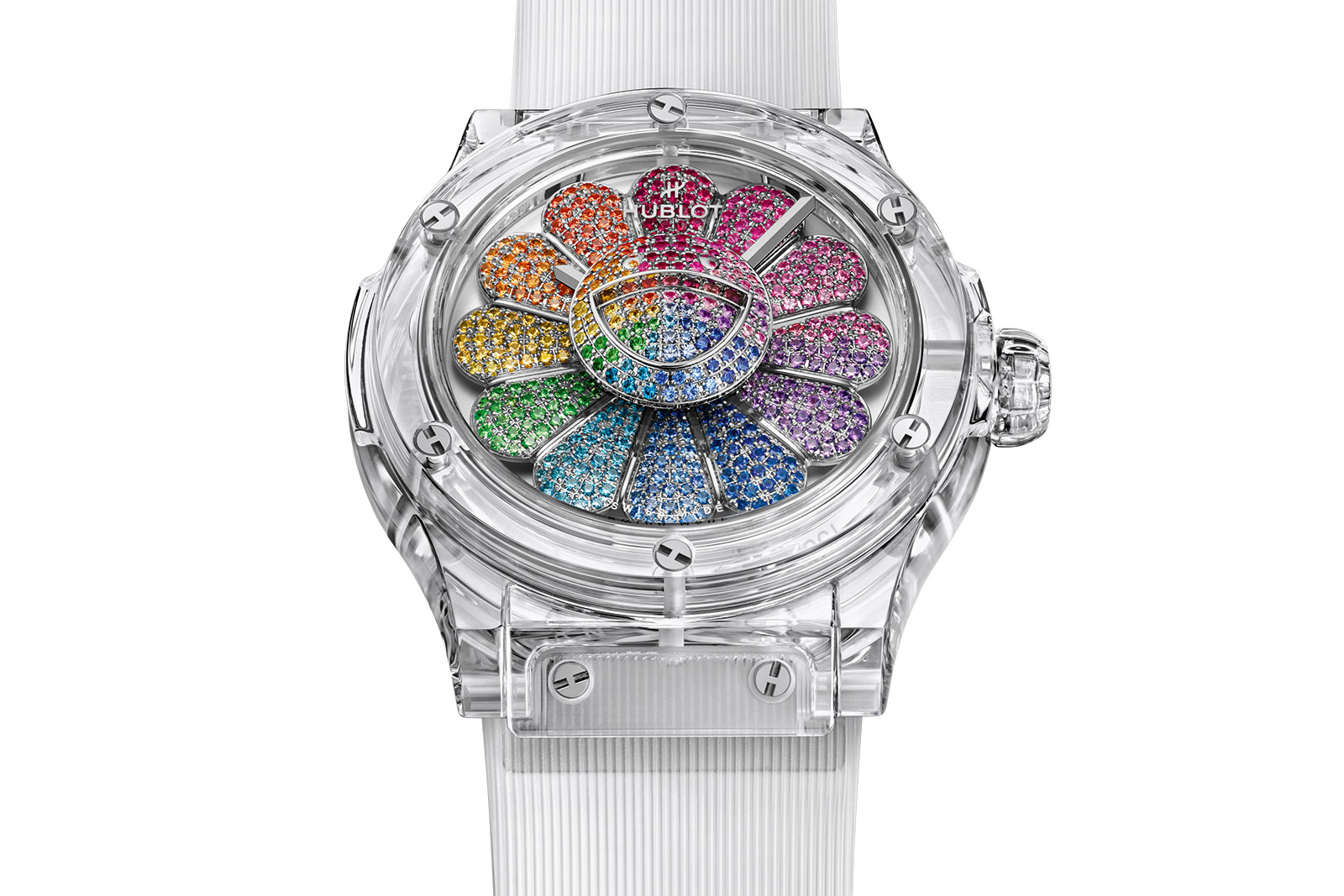 Earlier this year Hublot dropped the Classic Fusion Takashi Murakami with its spinning, smiling flower. But the watch was surprisingly all-black – even set with black diamonds – seemingly antithetical to the artist’s splashy, polychromatic style.

Now the watchmaker has taken the idea to its logical conclusion (or perhaps there will be more) with the Classic Fusion Takashi Murakami Sapphire Rainbow. It’s essentially the same watch but rendered in full colour and clear sapphire, an upbeat – and pricey – timepiece that exemplifies the quintessential aesthetic of both Hublot and Murakami. 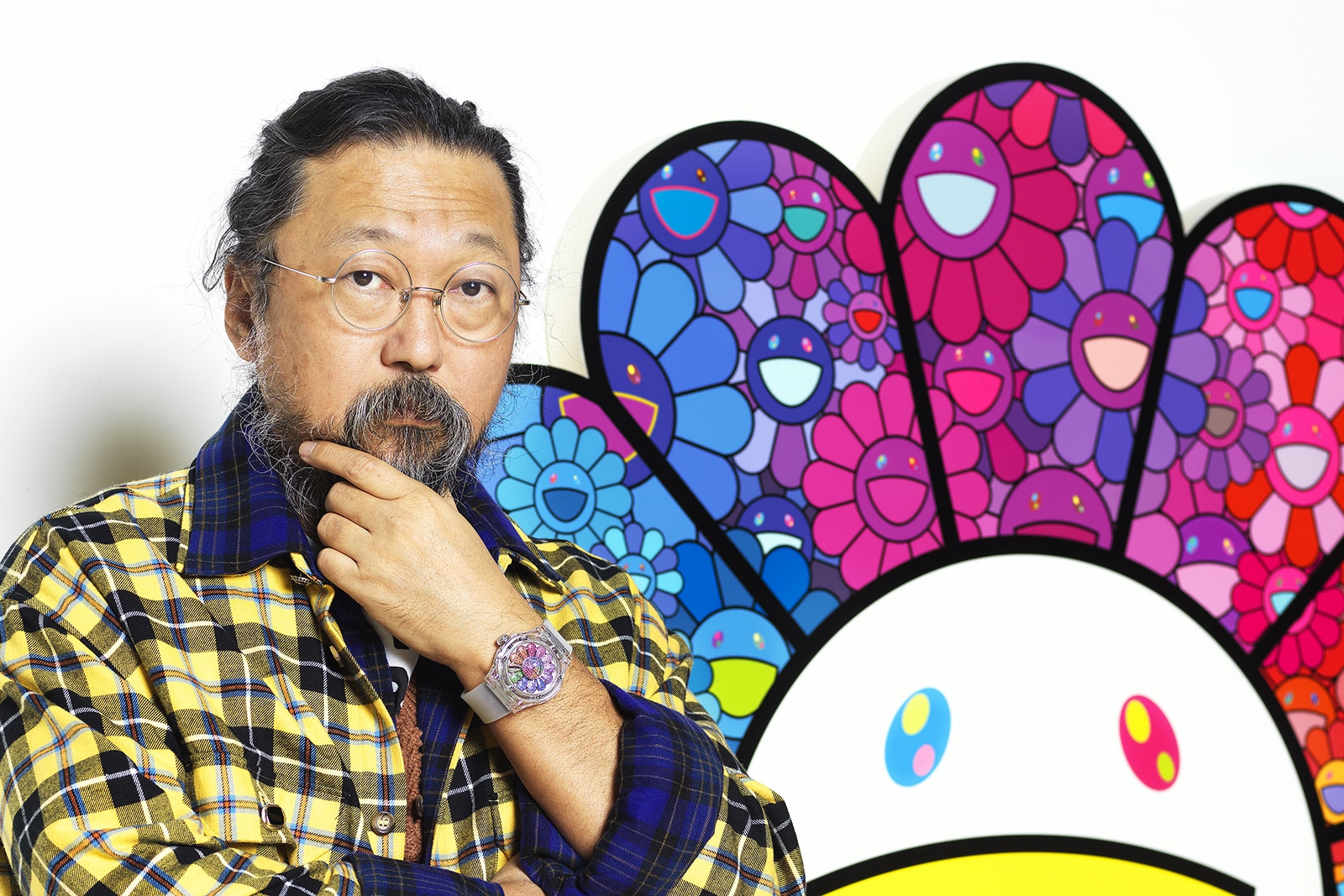 The all-black Murakami edition was a stellar success – it sold out within a day – and Hublot already had plans at the time for a follow up; in fact, its spokesperson said so during the launch of the original version). Repetition isn’t always exciting for fortunately the new edition is certainly perfectly executed for what it is, while also being a far smaller run.

Most importantly, it looks different enough – the chromatic opposite in fact – to make it compelling even for someone who owns the first version. The new look is even more striking, since the transparent case creates an open aesthetic that allows the coloured stones to shine – a case in another material would arguably have diminished the impact of the rainbow gemstones. Notably, the latest version is also true to the both the artist and brand. While a sapphire case isn’t novel, it’s is very much a specialty of Hublot, which has unveiled multiple watches of varied forms entirely in sapphire, including a Big Bang with an integrated bracelet of sapphire. And the smiling flower in flamboyant colours is one of Murakami’s most famous motifs. That said, because the latest Murakami edition is typical, it isn’t as intriguing as the original that was unexpectedly all-black. 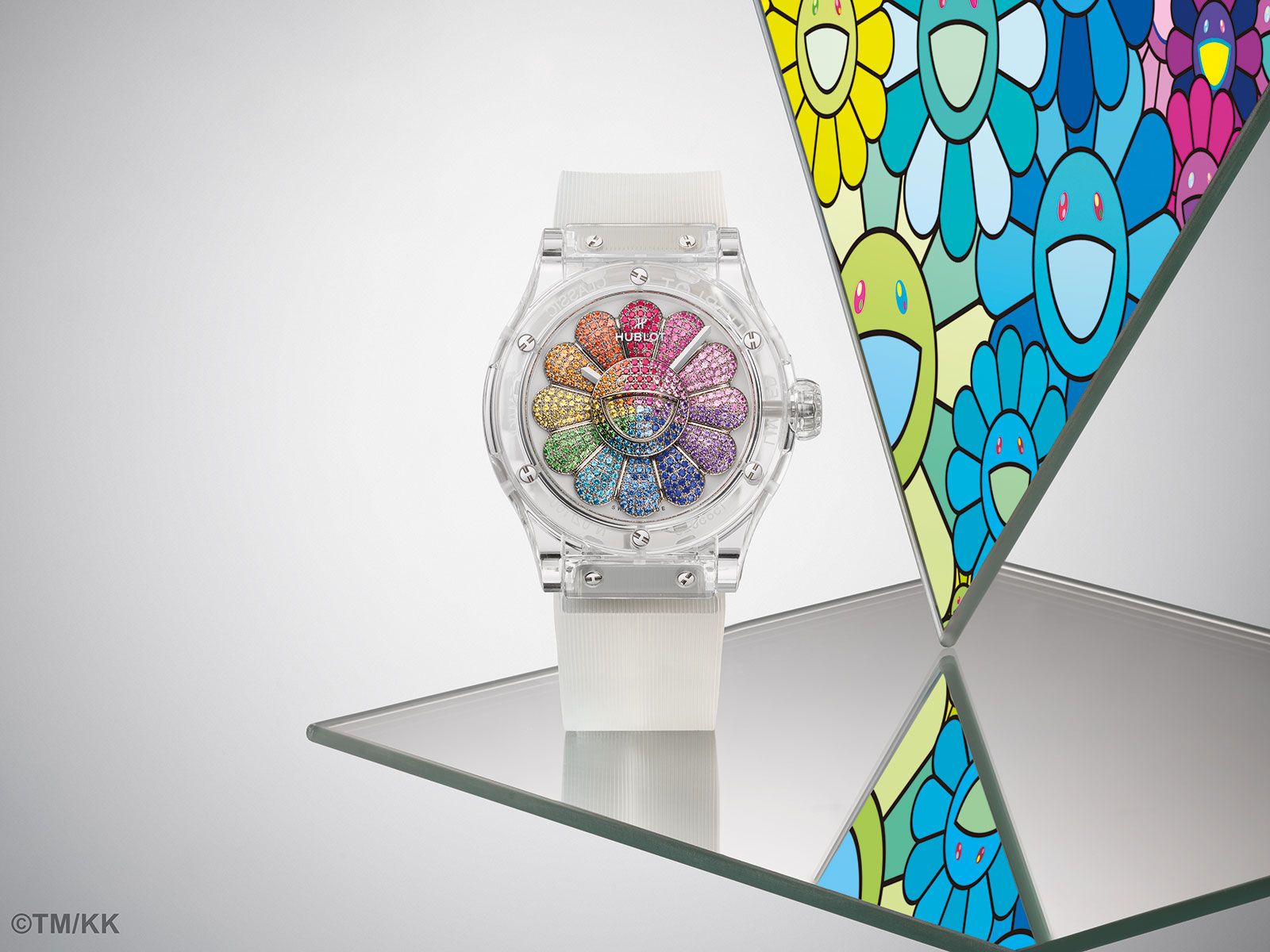 Both Murakami watches are amongst the best of Hublot’s collaborative editions, because they are far away from the standard production model. The Sapphire Rainbow, for instance, has an entirely new dial and case – it is definitely not a standard Classic Fusion – along with the “mysterious”, spinning complication first seen in the all-black version.

But the latest Murakami watch is US$106,000 – about four times as expensive as the original. That’s a lot of money any way you slice it, but it can be justified given that sapphire-case watches are always expensive and Murakami artwork is even more expensive. And in any case, all that doesn’t matter because the watch will surely sell out quicker than the original did. 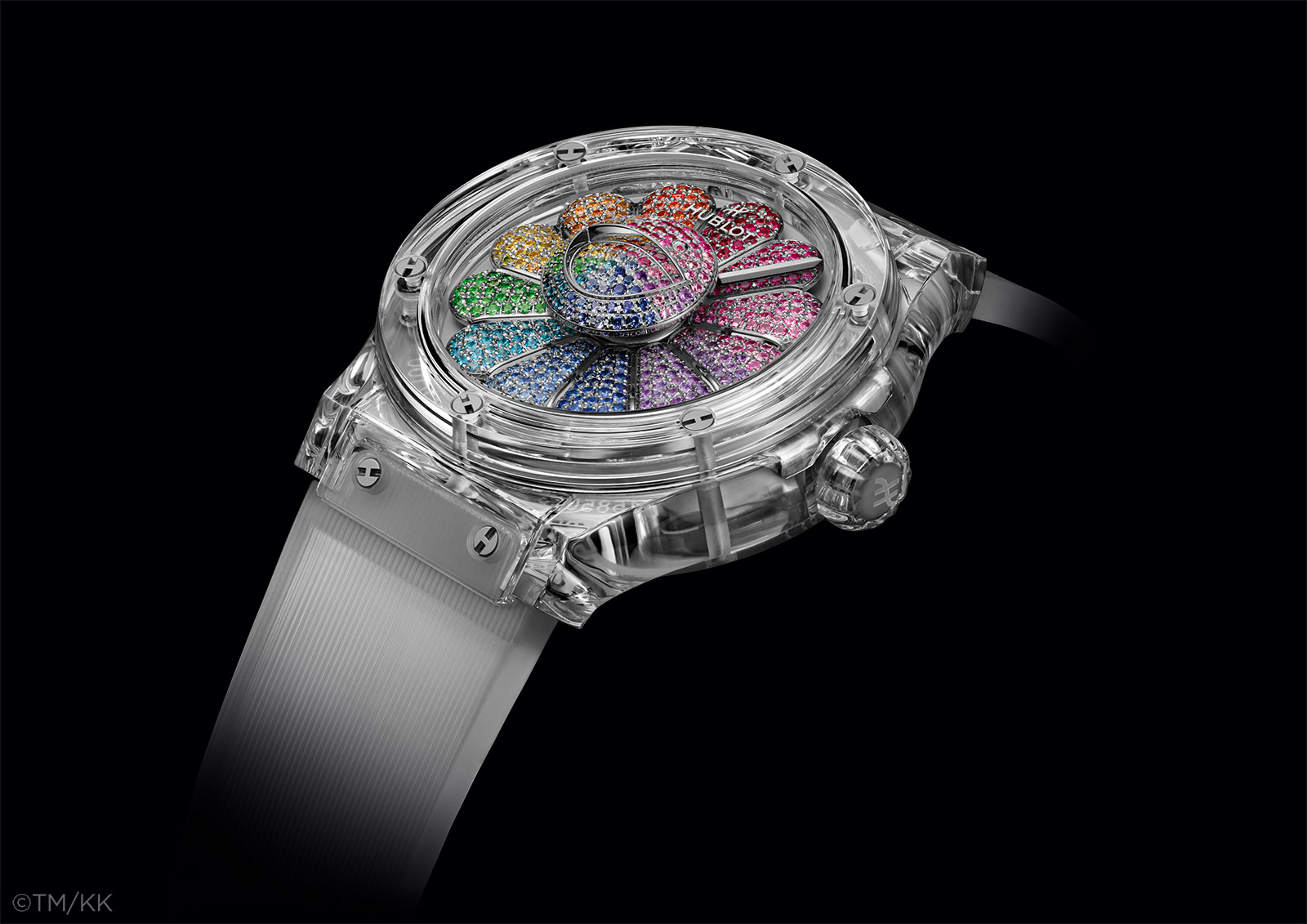 Spending all that money but you’ll still smile

Unlike the standard Classic Fusion case, the Sapphire Rainbow does away with the “fusion” of twin materials, which is usually ceramic and resin. Here it’s entirely clear sapphire crystal – but held together by steel screws and pins – which gives the watch a more rarefied look and feel, since the material is usually associated with the priciest of watches.

Other than a new case, the Sapphire Rainbow also gets a movement that’s a major upgrade from the base-model Classic Fusion. It’s the brand’s in-house Unico movement that has a running time of three days, instead of an ETA-based calibre. 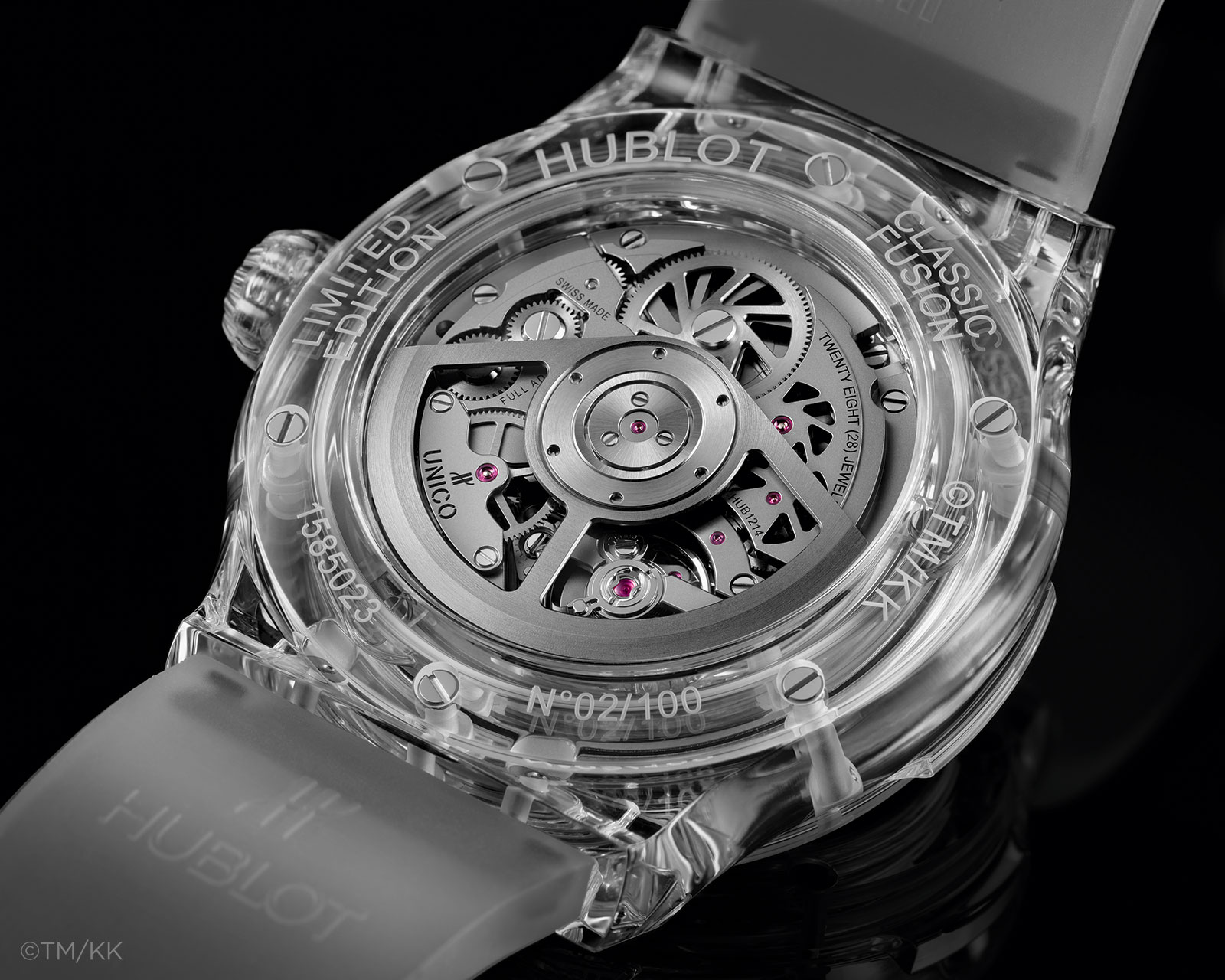 And the movement has been modified to accommodate the petals on the front. The cannon pinion is extended so that the hour and minutes hand are elevated above the petals, which is a decorative disc weighted on one half, allowing it to spin freely and light to dance on the gemstones. 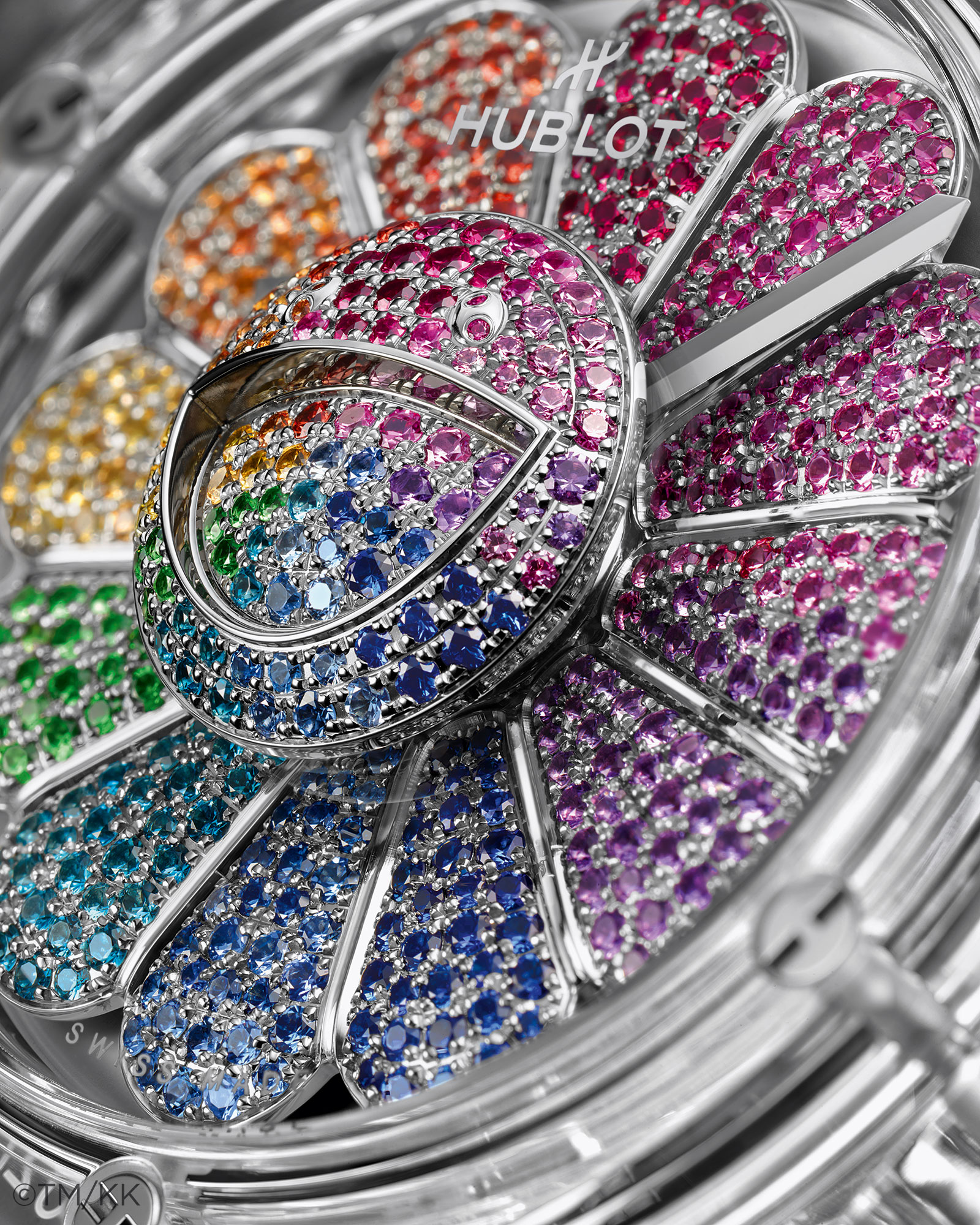