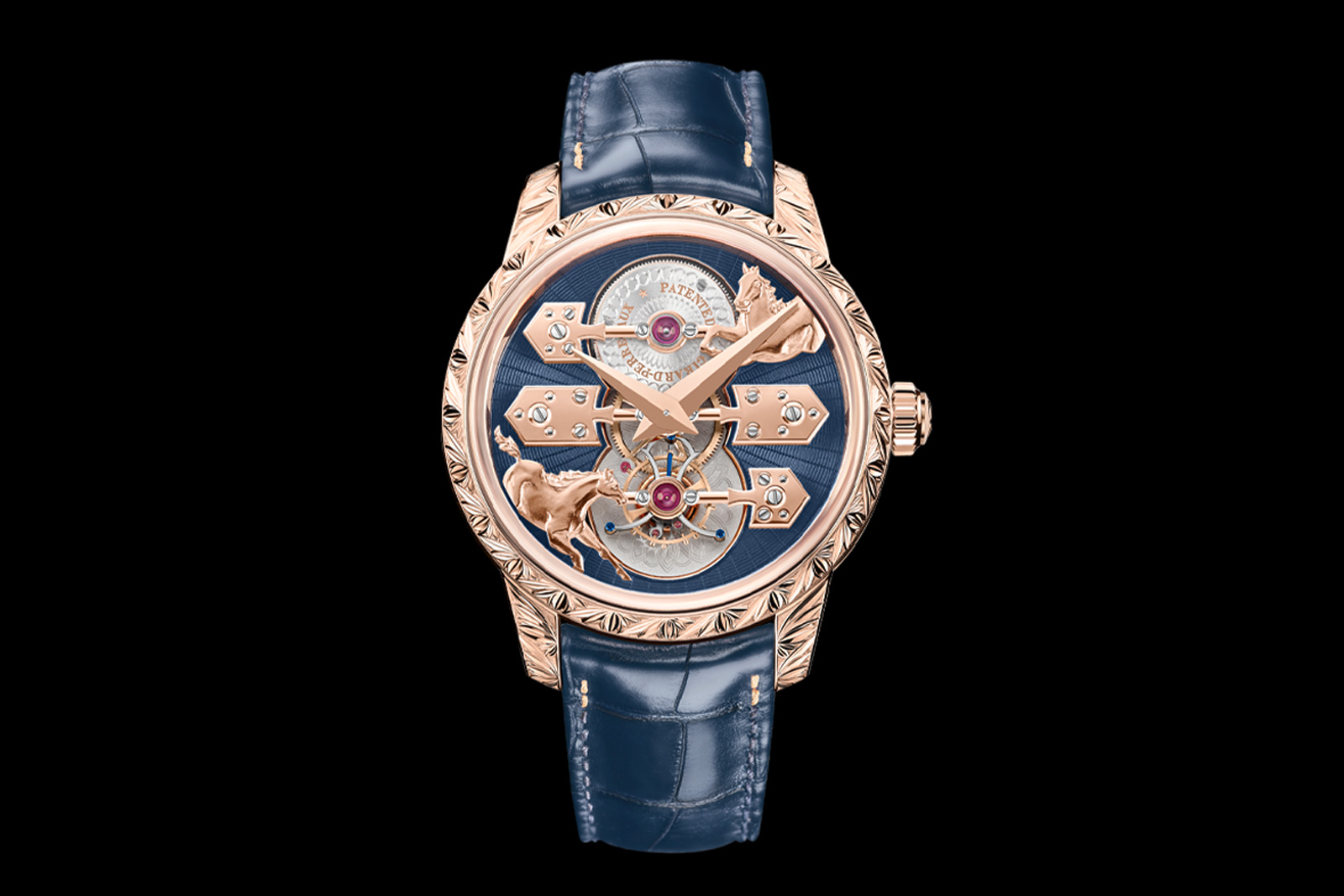 Most famous for the triple-golden bridge tourbillon, Girard-Perregaux is paying tribute to that 19th century invention the La Esmeralda Tourbillon “à Secret” Eternity Edition, which arrives just in time for its 230th anniversary.

The latest La Esmeralda Tourbillon is strikingly different from its predecessors – clearly no expense was spared in its decoration. Lavishly hand-engraved and enamelled – front and back and even on the sides of the case – the La Esmeralda even incorporates a novel movement finishing technique known as concave anglage on its gold bridges. 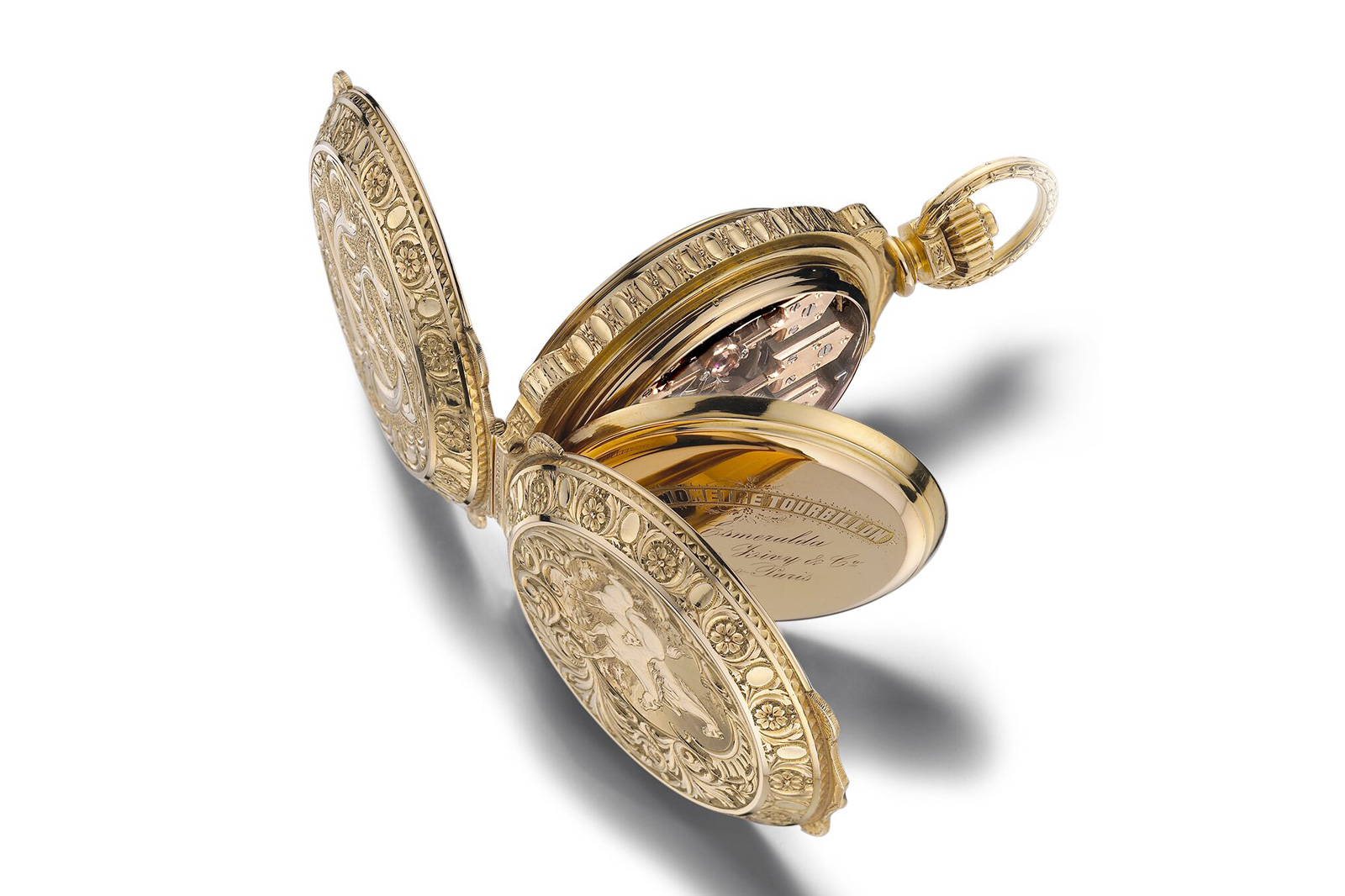 Girard-Perregaux has reinterpreted the triple bridge constructions in many different ways, resulting in a large family of “bridge” watches that includes an ultra-modern example with “flying” bridges and even one without a tourbillon at all.

Still the La Esmeralda manages to stand out – by a large margin – because it’s truly exquisite. The decoration is magnificent, while also being faithful to the original with its equestrian theme. In fact, it surpasses the one-off La Esmeralda Tourbillon “à Secret” made in 2018, both in terms of style and artisanal quality. 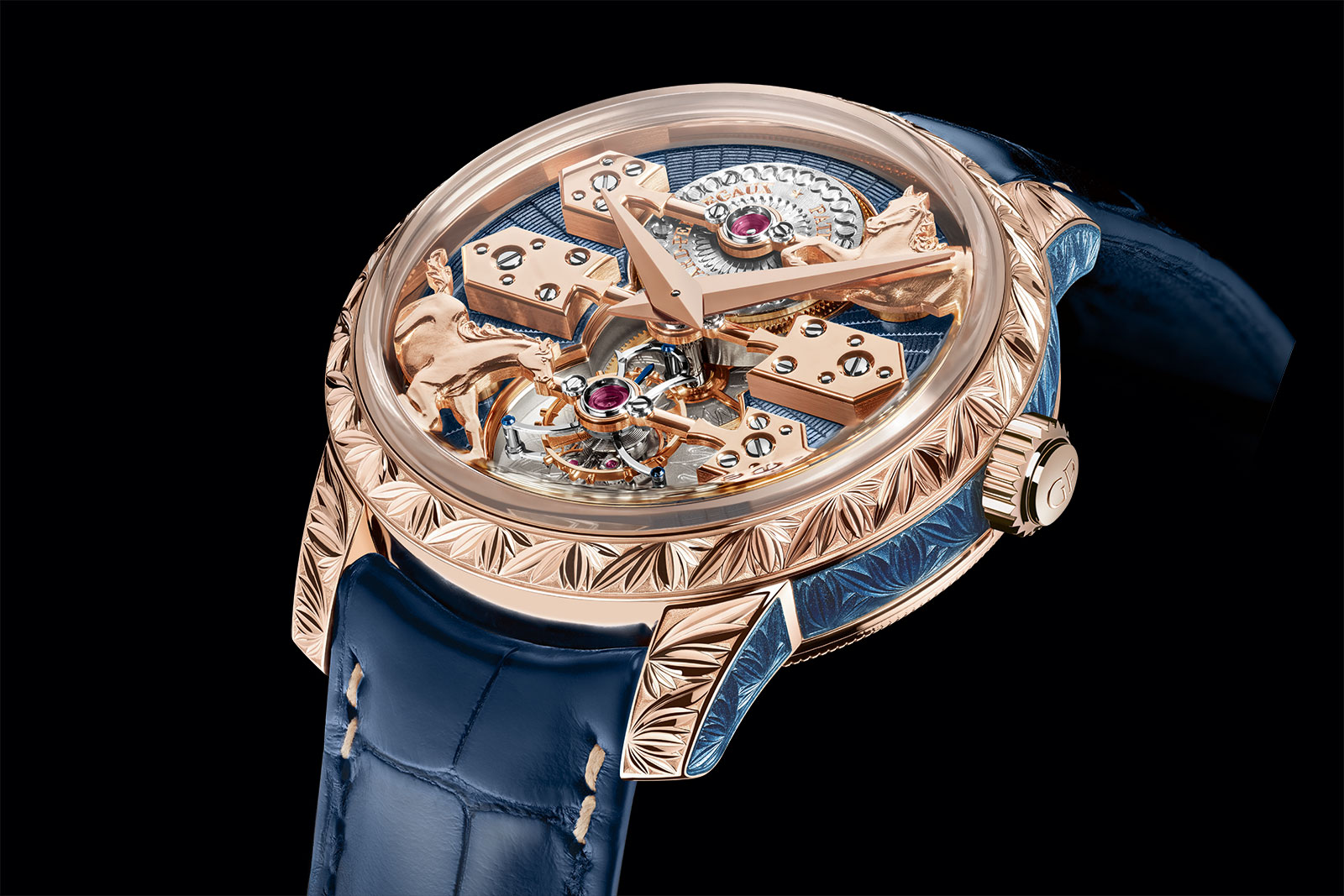 Even from a distance, the La Esmeralda is clearly different from past triple-bridge models, though the traditional arrow-shaped bridges remain obvious. The dial features two golden horses, each replacing one end of a bridge, which immediately liven up the dial.

With the large, 43 mm case and blue champleve enamel on the dial and case flanks –  stunning contrast of blue and pink gold – the watch clearly makes a statement on the wrist.

That said, up close it is similarly impressive with the concave bevelling of the gold bridges, a technique that’s being used for the first time by Girard-Perregaux.

Unsurprisingly, the La Esmeralda can be customised to certain degree, with seven colours to choose from for the enamelled decoration. 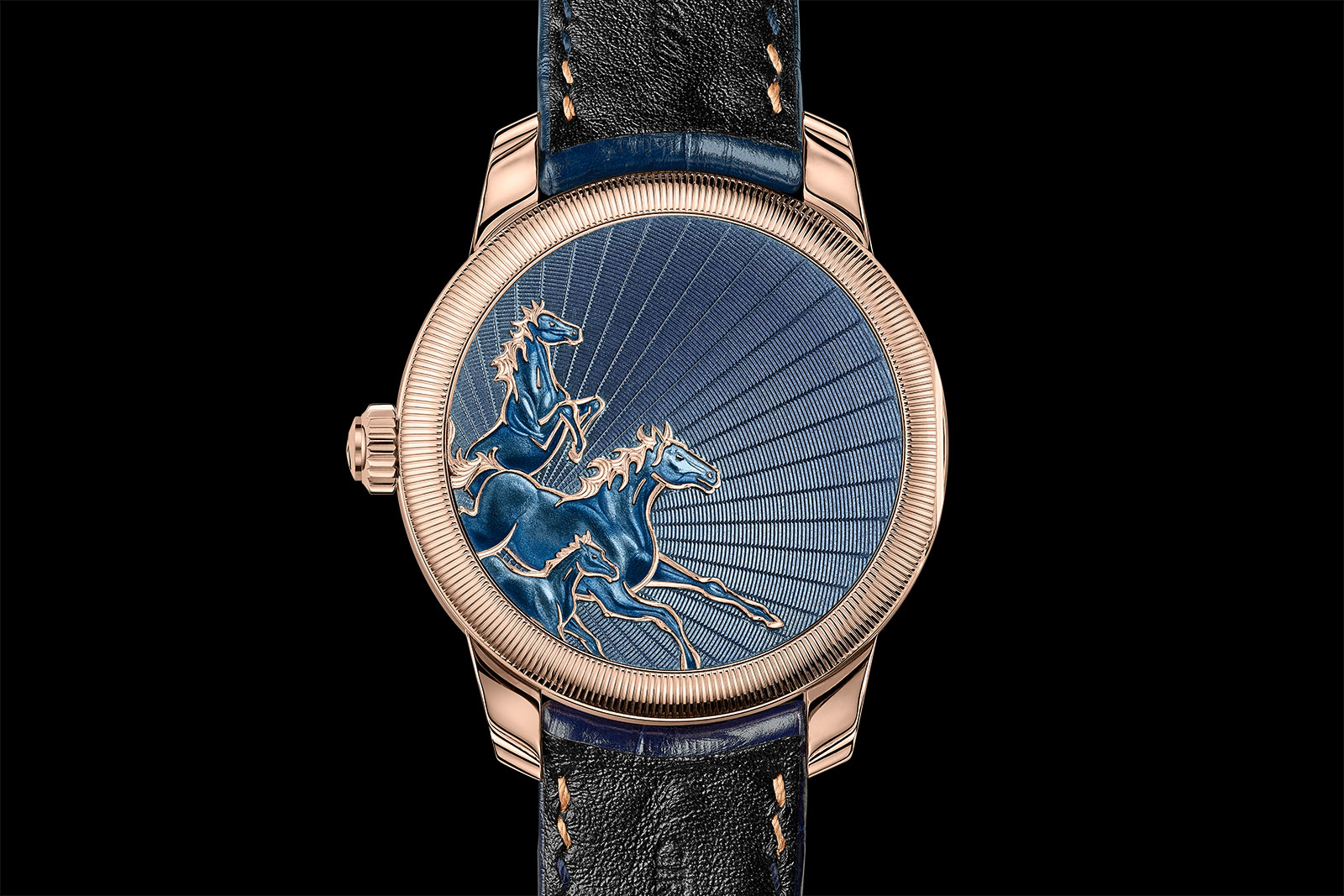 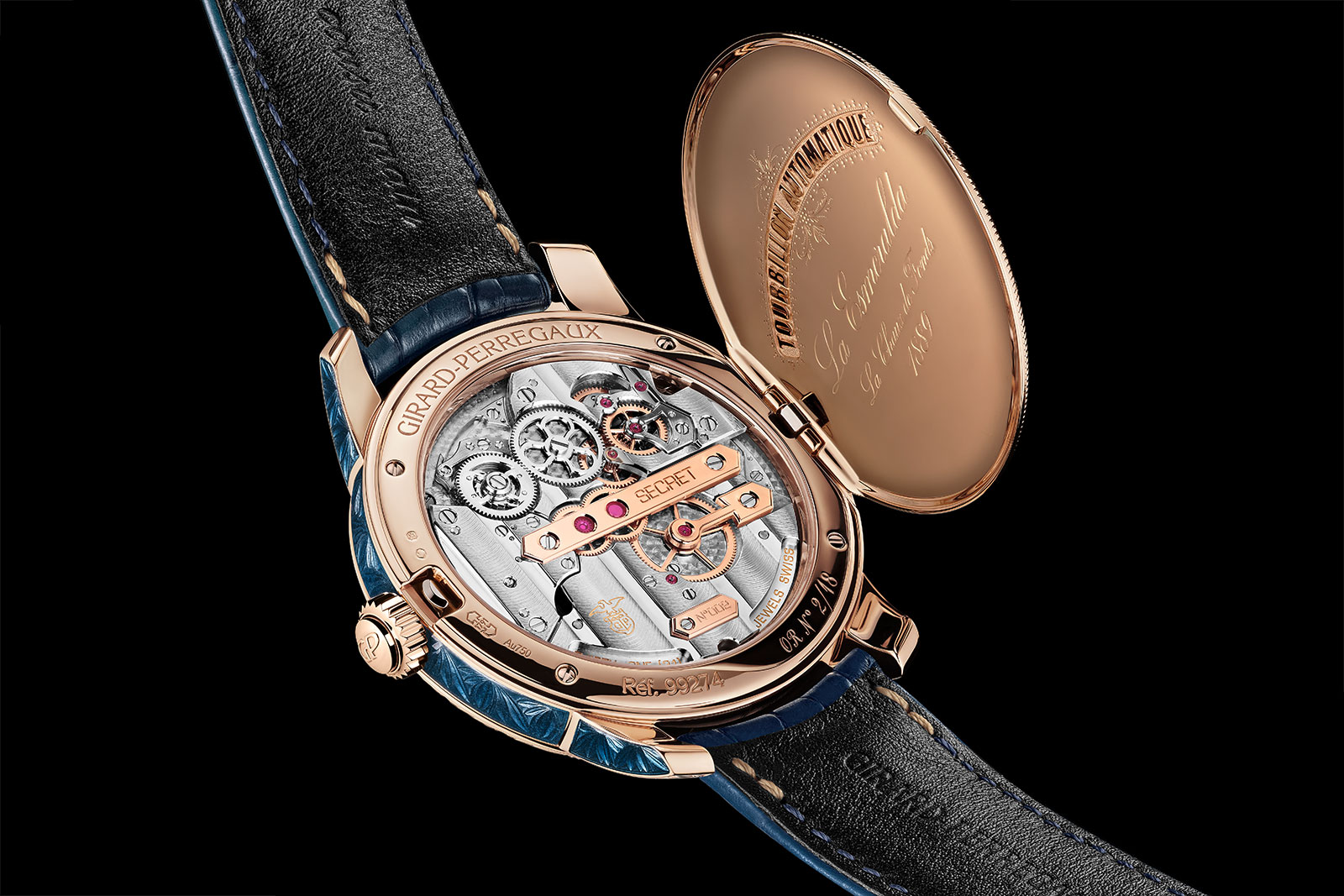 The La Esmeralda Tourbillon is thoroughly decorated in a style inspired by the original pocket watch from over a century ago.

Like the pocket watch, the pink gold case, including the buckle, is entirely engraved with a leaf motif. And the sides of the case and lugs are further decorated with blue enamel, creating a two-tone effect on the imposing pink gold case. 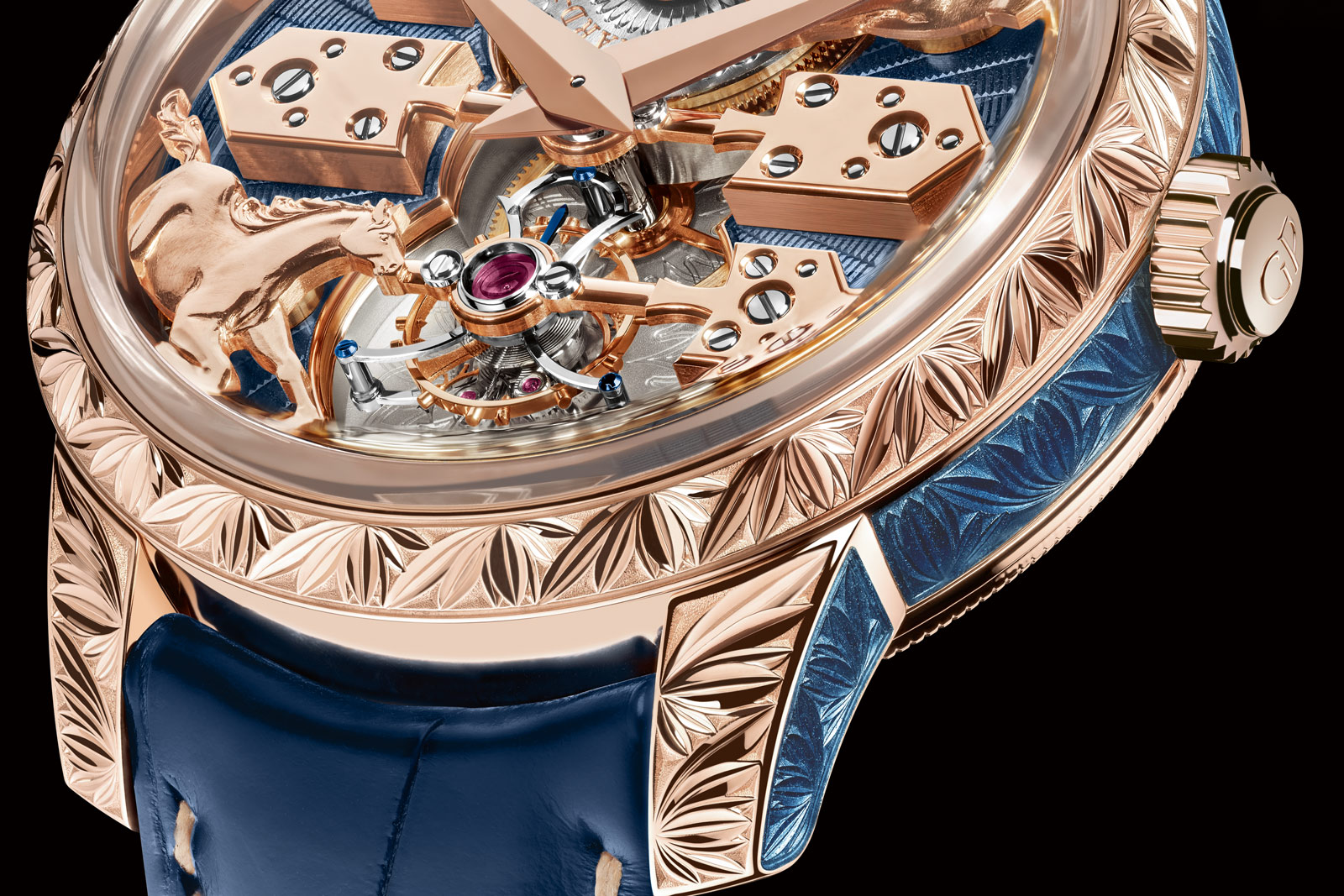 Another highlight is the movement finish, as it is with most of the haute horlogerie triple-bridge tourbillons. But here the finishing is a little more special because of novel techniques used for both bevelling and striping.

Apparent only up close is the new finishing technique for the gold bridges that is notable for being perhaps a industry first.

Instead of the typical rounded or flat anglage, the bevelling along the bridges is concave in profile, which is visually more interesting because of an optical illusion: a highly polished concave surface will appear convex at times. That results in bevels that can be little perplexing, making them curiously more attractive. 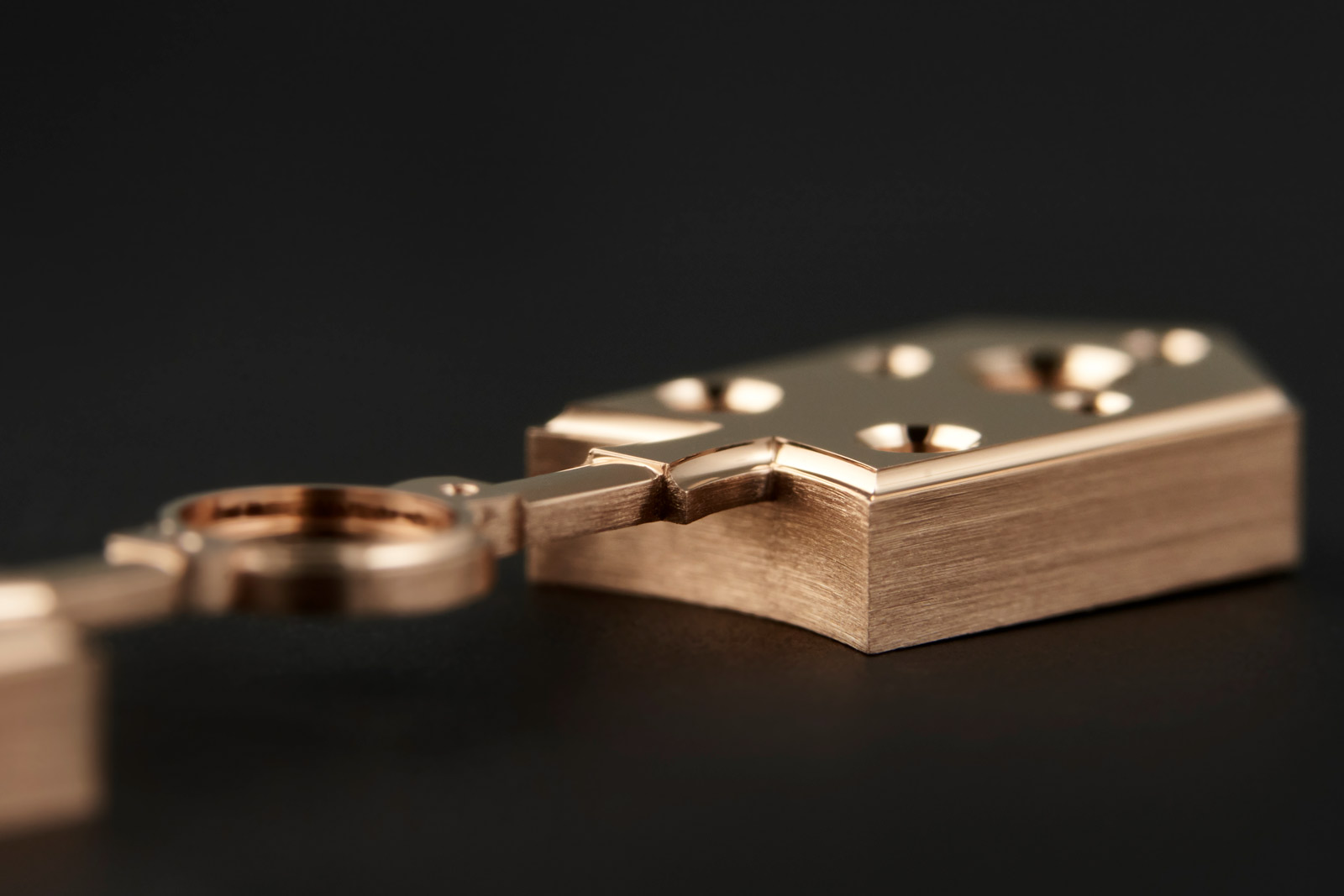 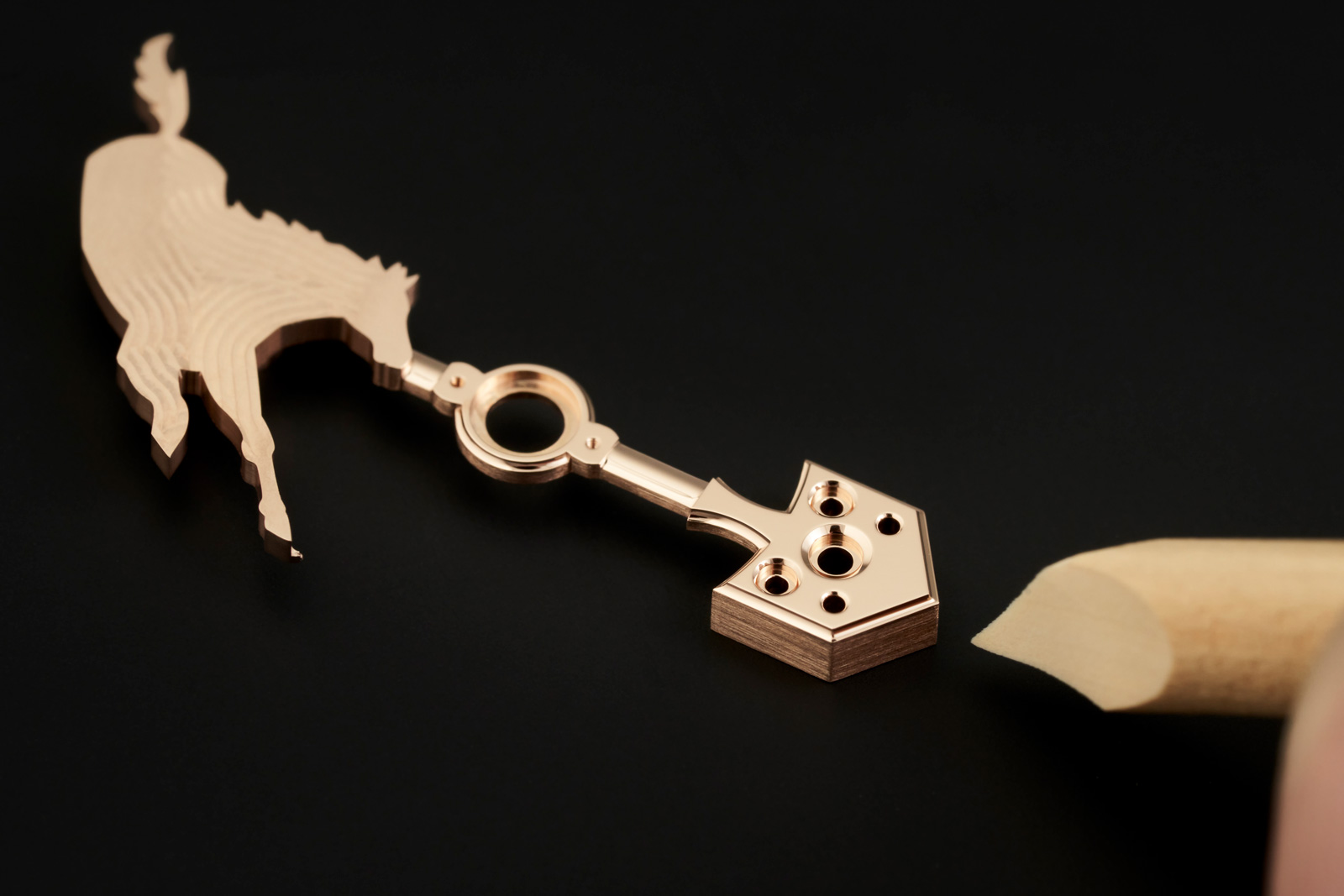 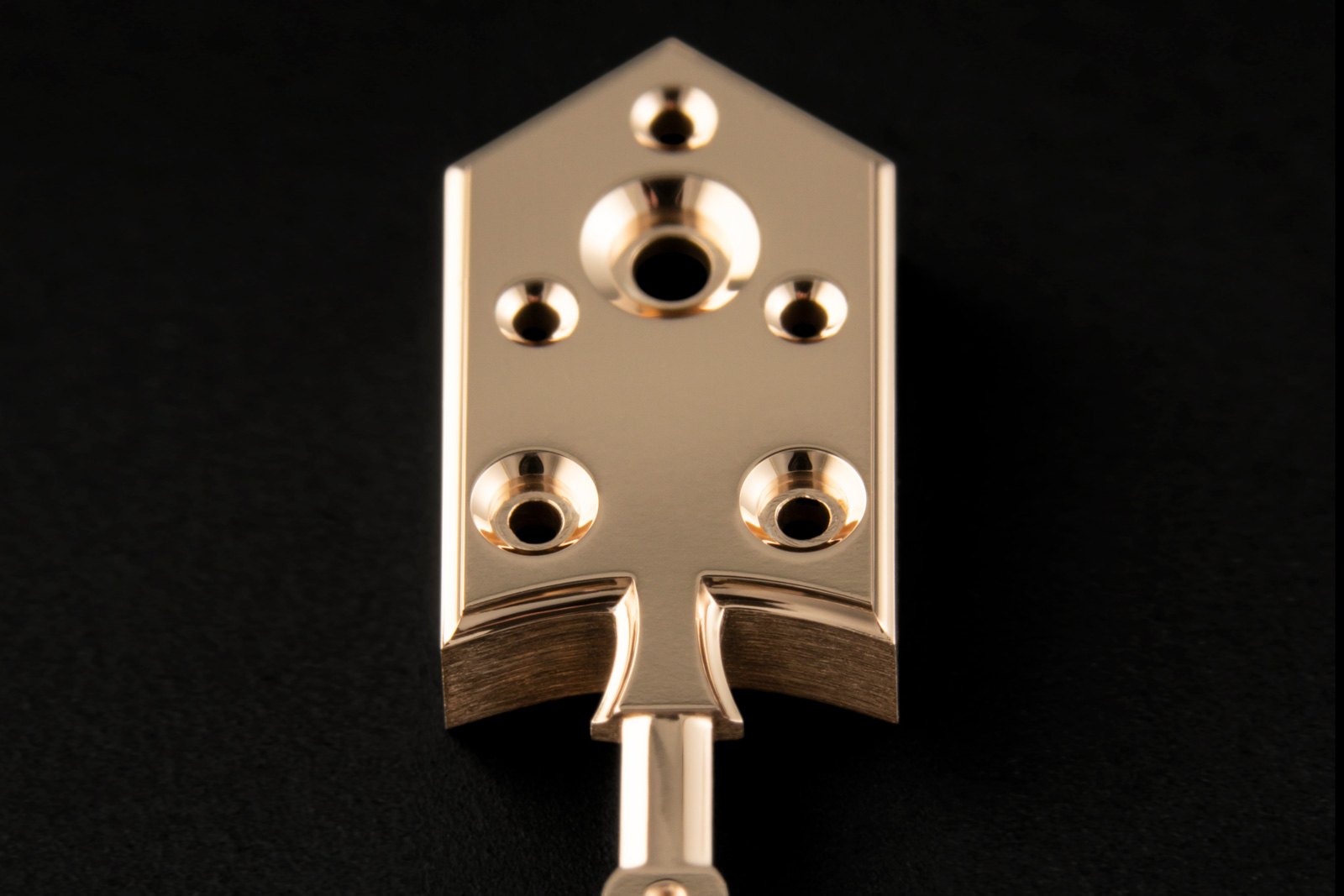 The concave bevelling is echoed on the bridges, which have mirror polished, concave stripes ground into their surfaces, forming a border between the Geneva stripes. 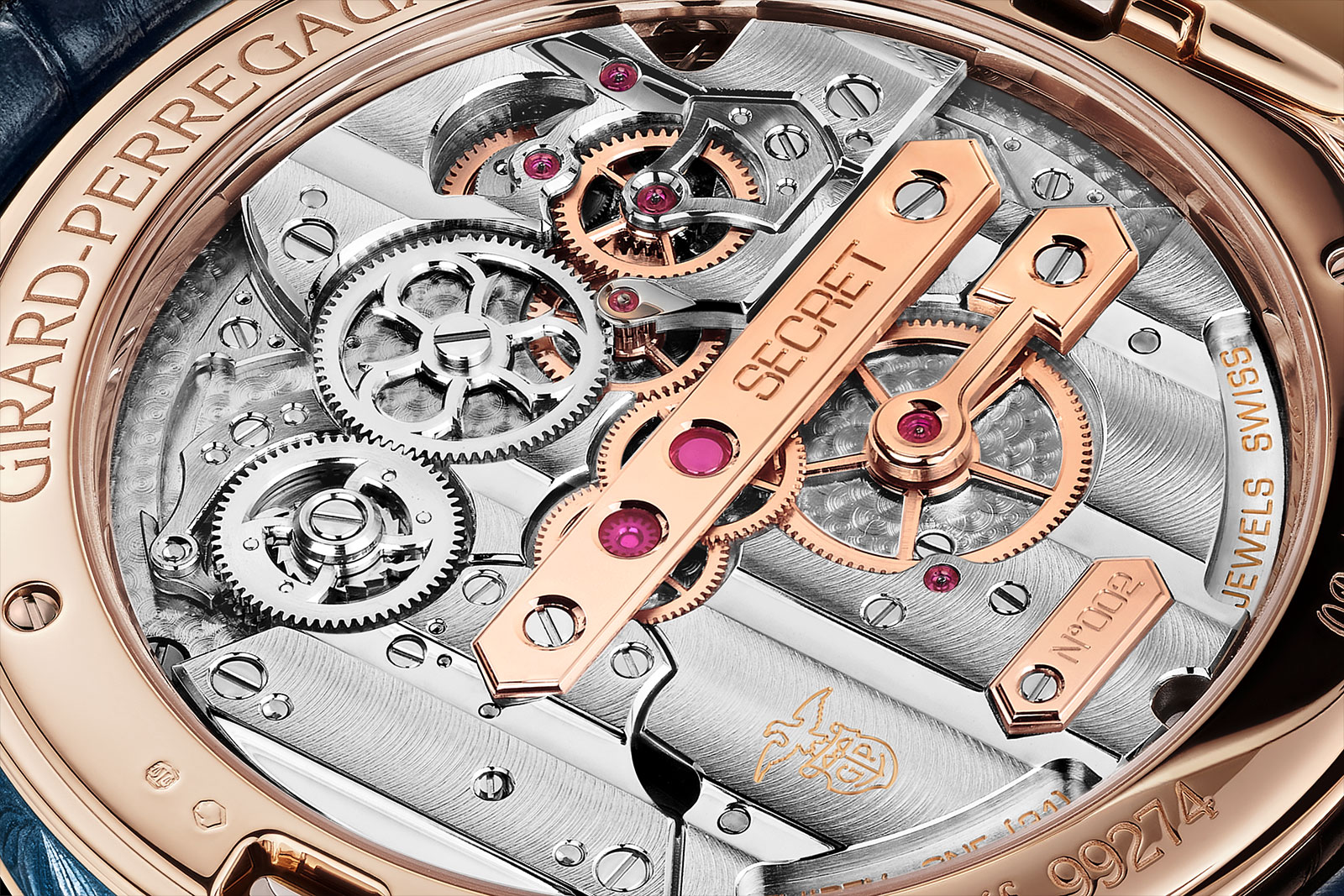 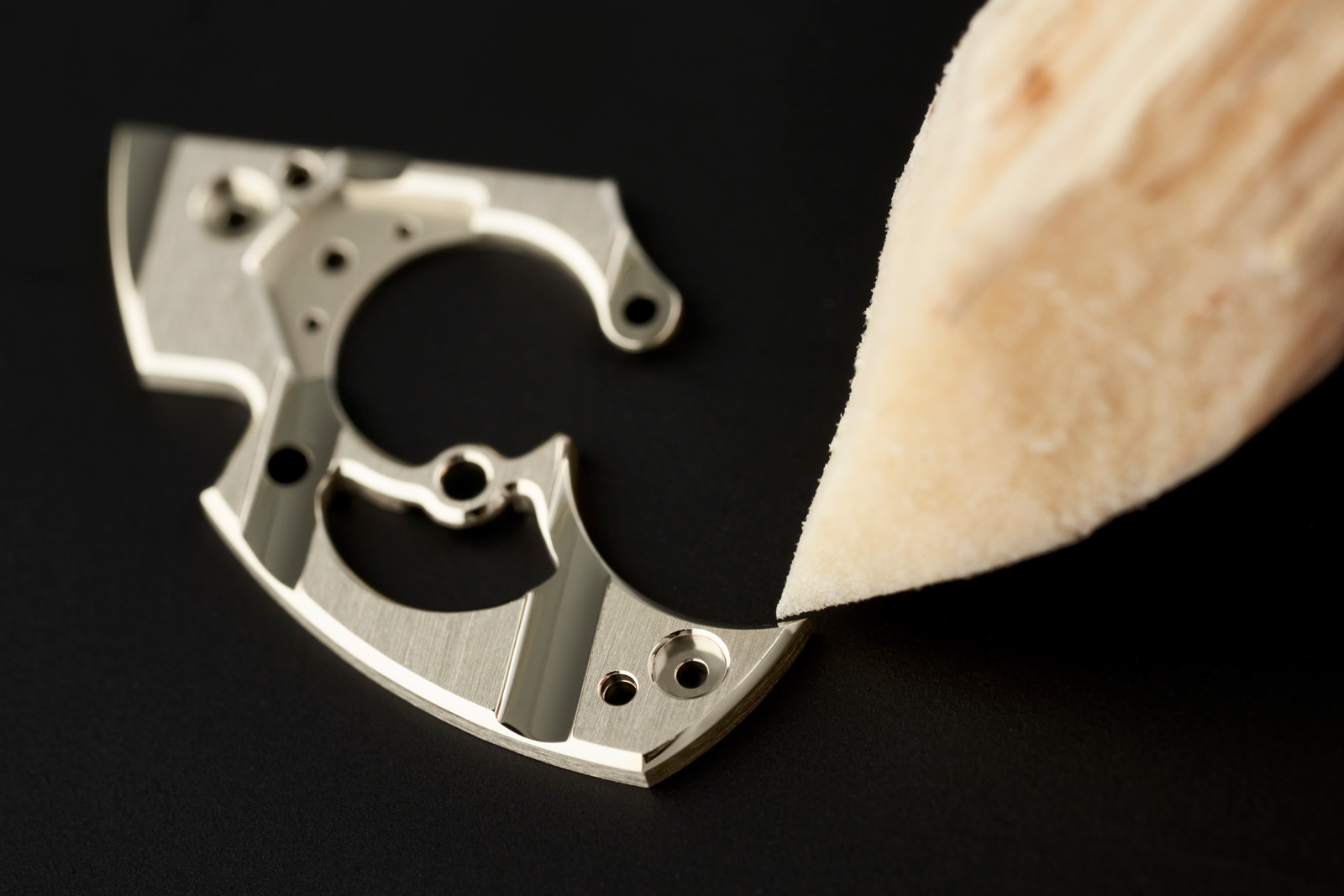 Finally, the dial (which is actually the front of the base plate) as well as the case back are both engine-turned with a sun-ray guilloche. This is naturally done the traditional way, with a hand-operated straight line engine.

Both are then painted with enamel paste and fired in an oven in a technique known as champleve, creating a translucent enamel layer over the guilloche. 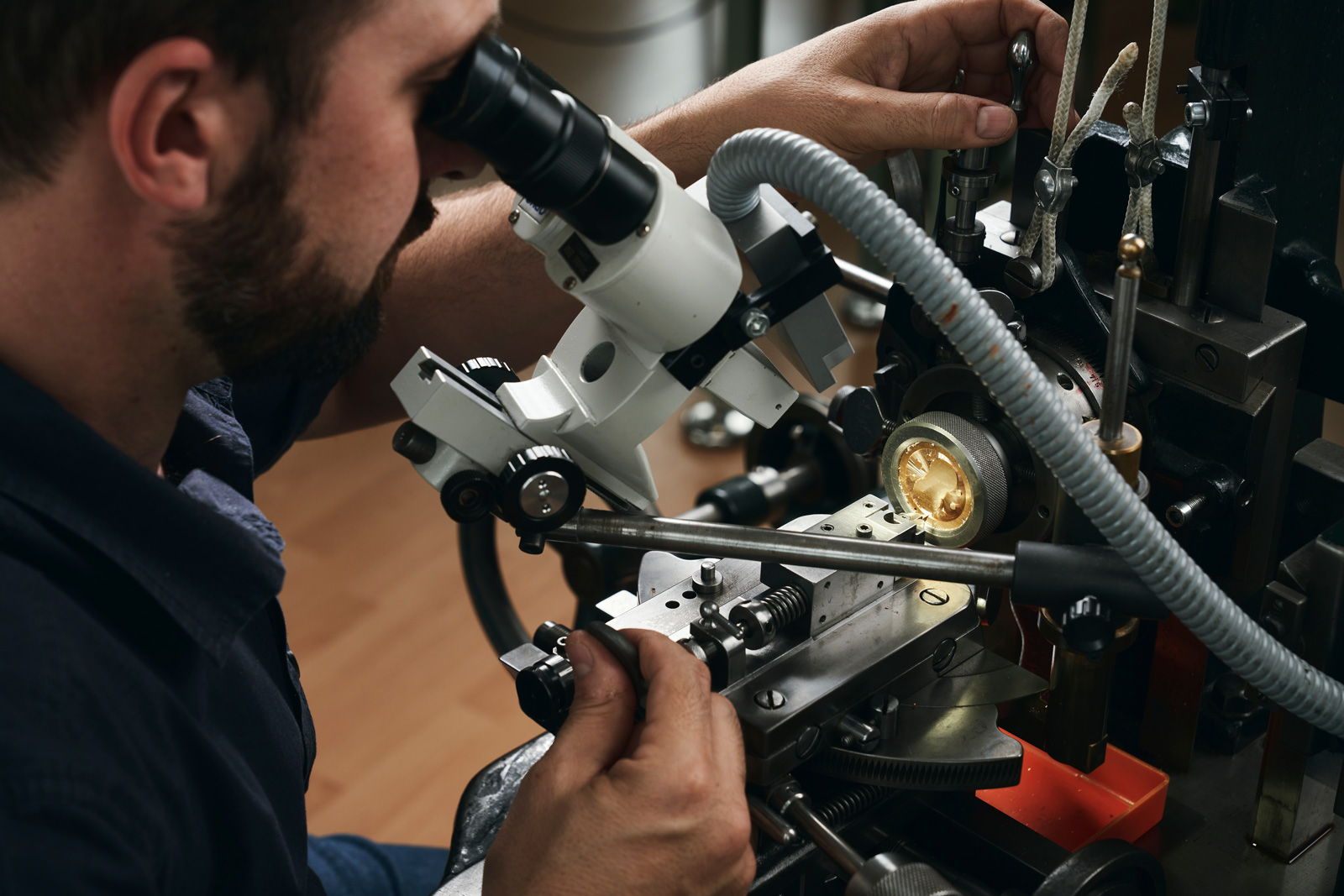 Engine turning the back 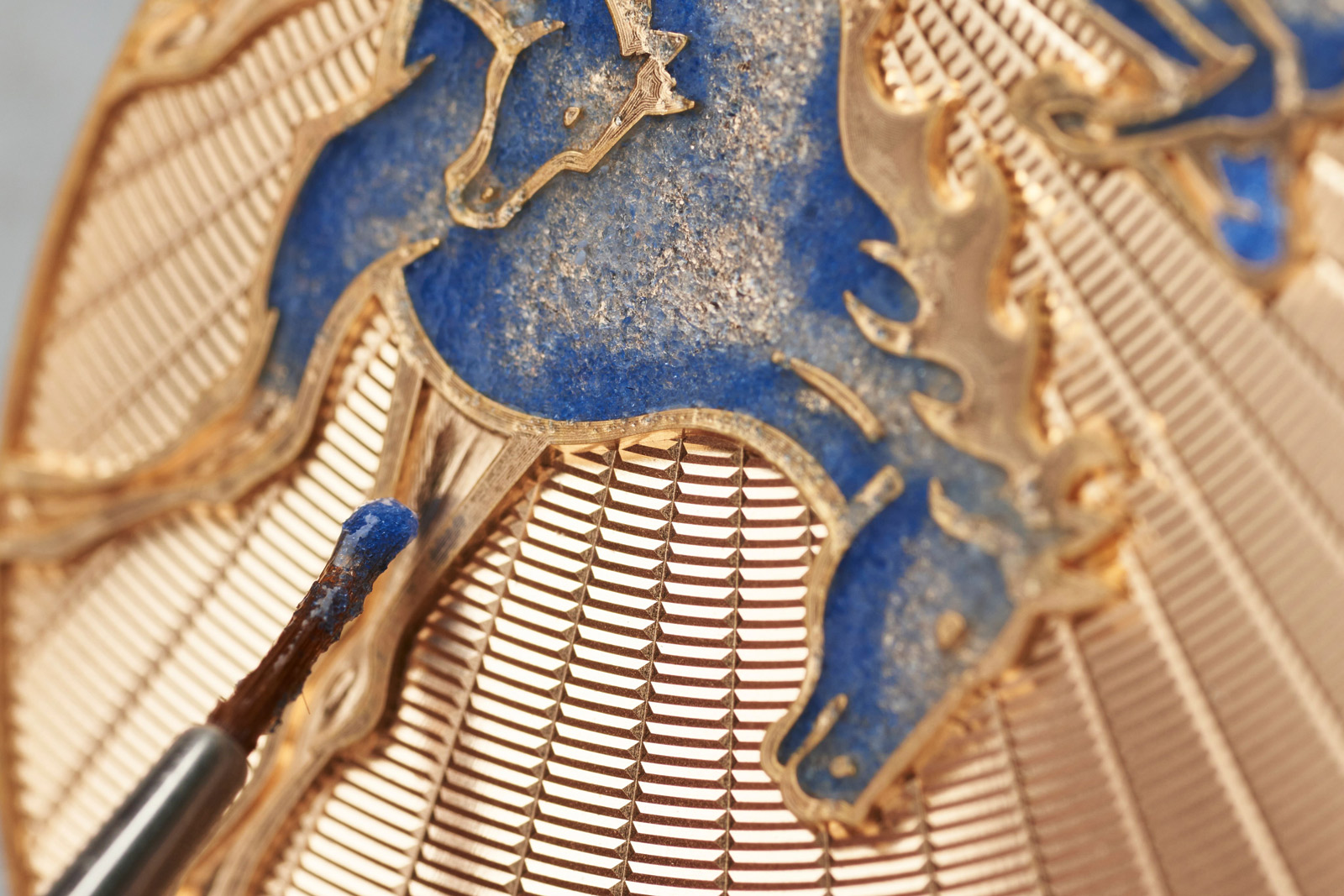 The case back features a horse motif in relief

Limited edition: Maximum 18 pieces in each of the seven colours
Availability: At Girard-Perregaux boutiques and retailers
Price: CHF360,300 (equivalent to about US$390,300)