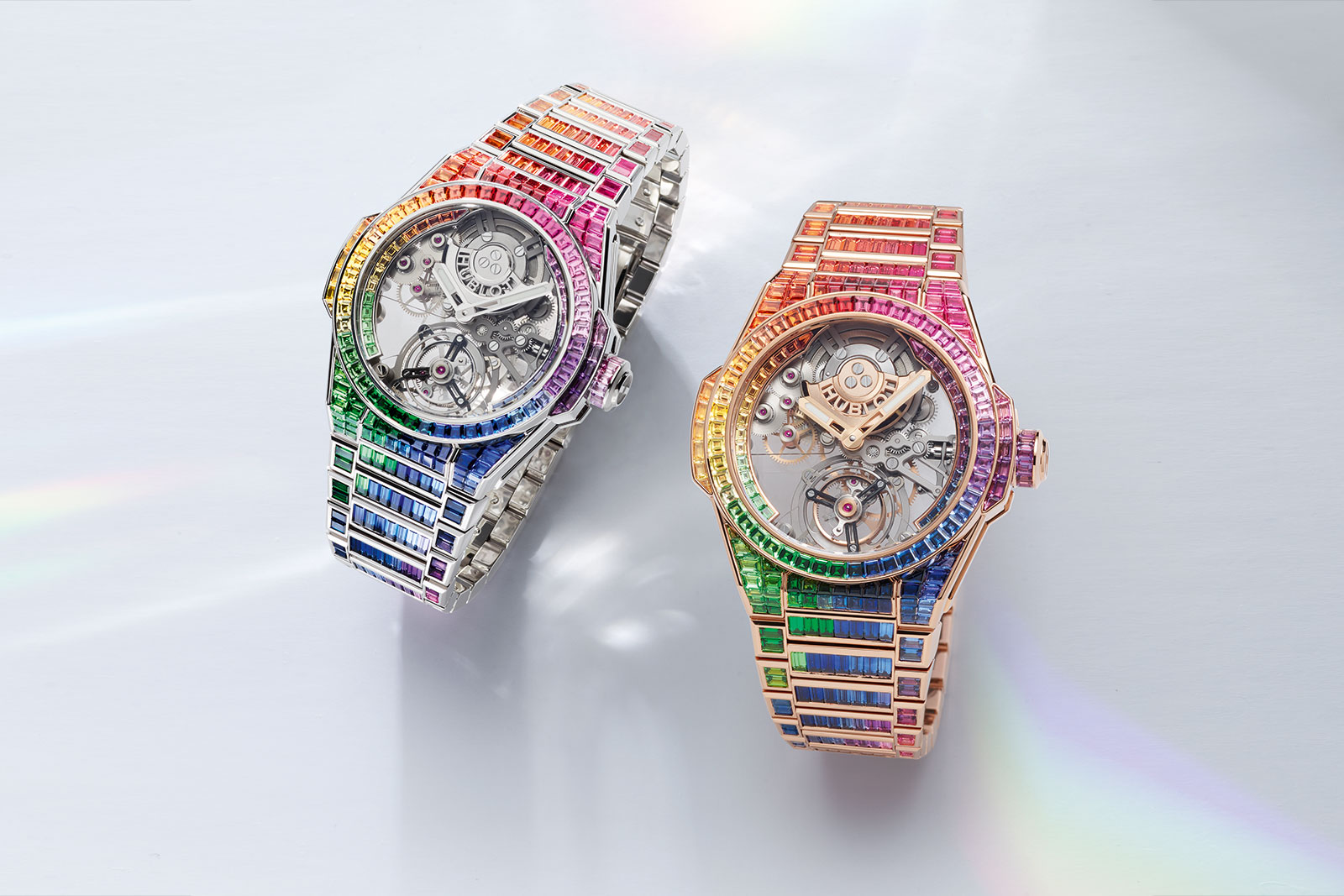 The most extravagant watch to date in 2021 has arrived courtesy of Hublot – the Big Bang Integral Tourbillon Rainbow.

Combining Hublot’s signature porthole face with the integrated bracelet introduced last year, the Big Bang Integral Tourbillon Rainbow has almost every surface set with coloured gemstones. And ticking away inside is an in-house movement with a tourbillon and clear sapphire bridges.

Rainbow watches are the “it” watches of our era, with the Rolex Daytona “Rainbow” being the most famous of the multi-coloured, gem-set timepieces. But now Hublot has taken it to the outlandish next level.

The Big Bang Integral Tourbillon Rainbow is a lot, probably too much, but it’s also a stunning example of gem setting – proof comes in the form of 36 carats of stones – with an unusually interesting movement. 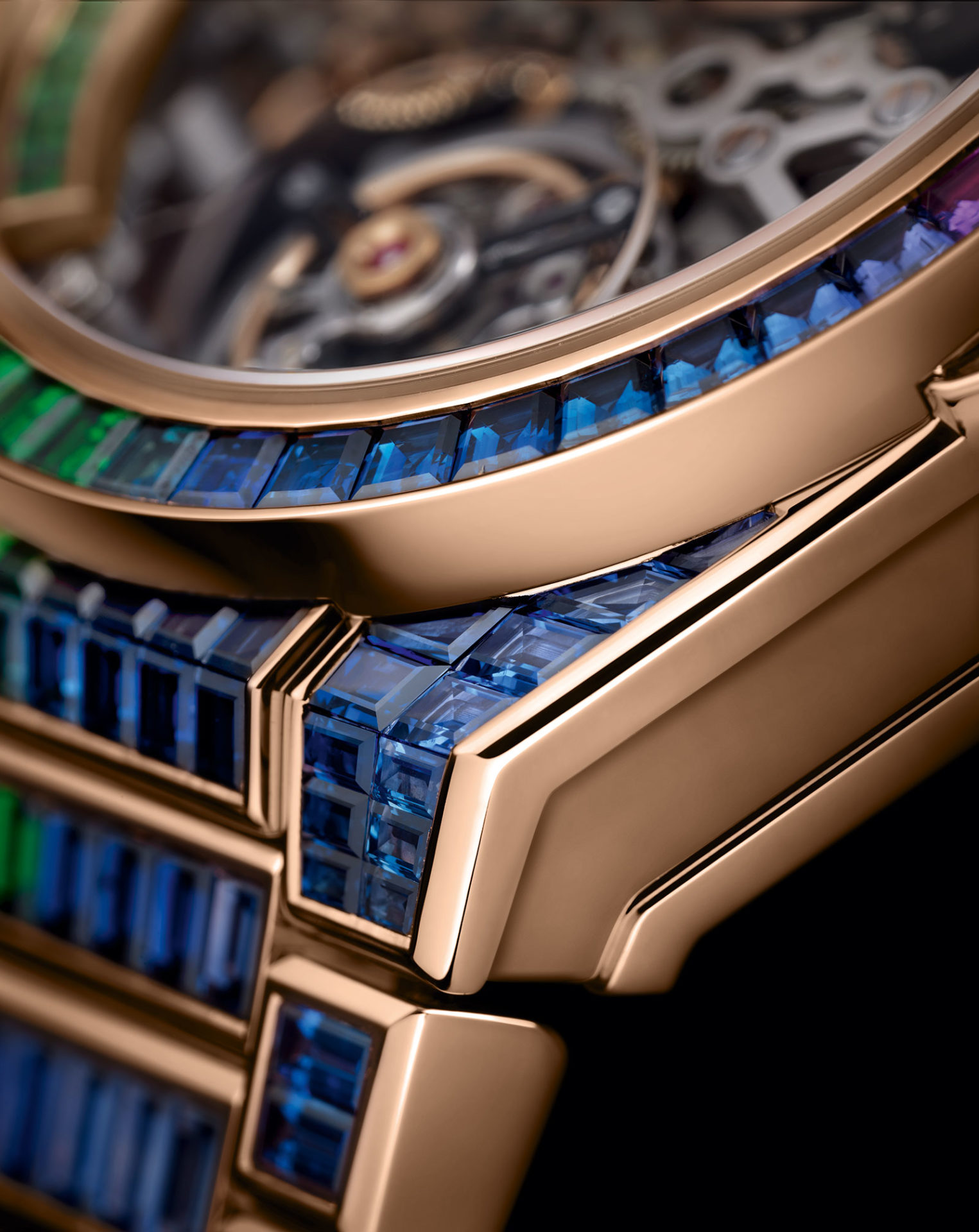 The movement will probably be overlooked by whoever buys either of the two unique examples, but it is quite accomplished in a technical sense: an automatic tourbillon wound by a micro-rotor, with everything held in place by clear sapphire bridges.

Contrasting starkly with the densely saturated case, the movement is light and airy in its layout, with its wheels appearing to be floating within the case thanks to the transparent bridges.

The only glaring shortcoming in its technical features is the Etachron regulator index for the tourbillon. It’s entirely functional, but typically found in less expensive watches. 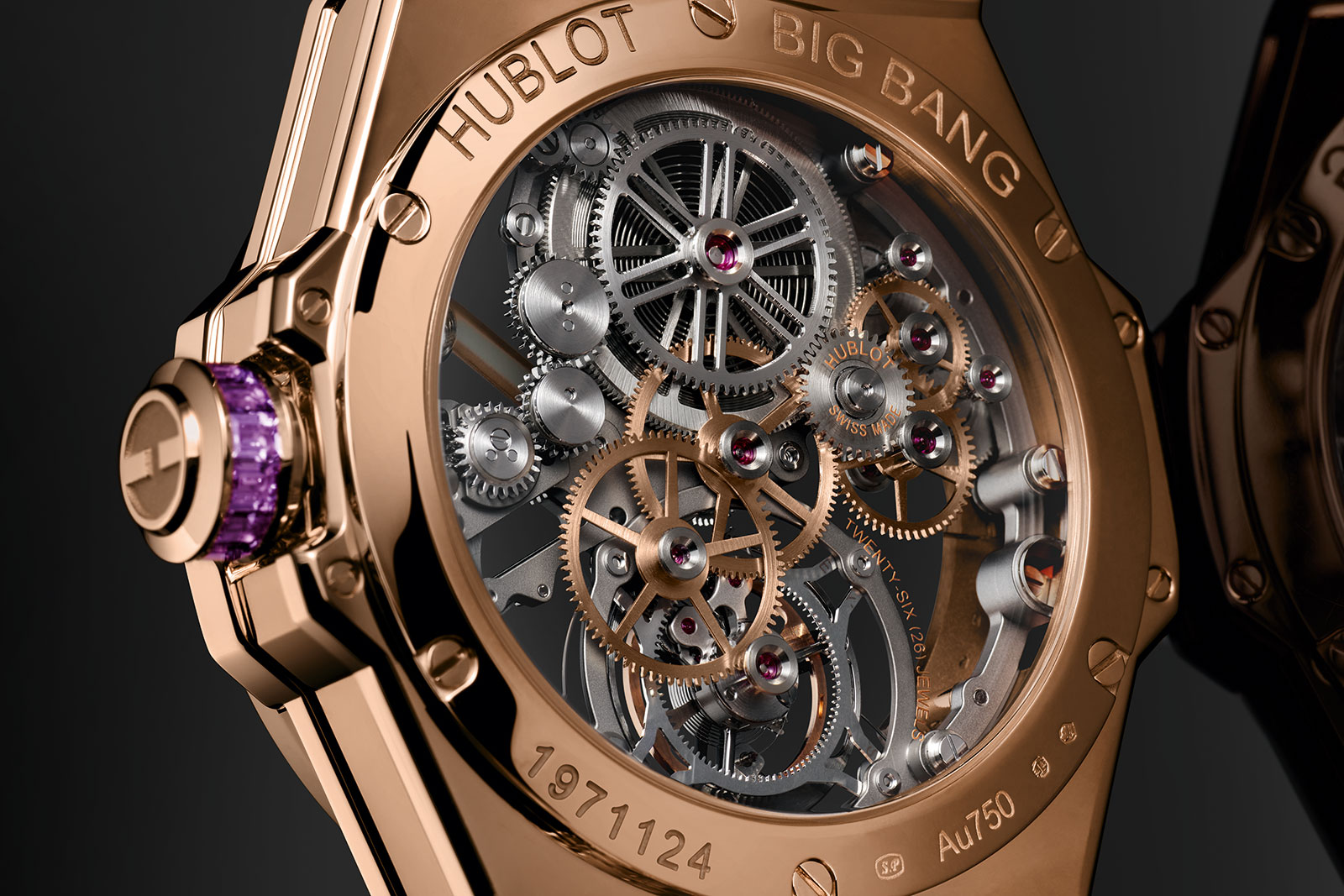 Even though I would not wear a watch like this, I certainly understand its appeal. If anything, the gemstones are actually insufficient. The flanks of the case and bracelet are naked, simply mirror-polished gold, and could do with a line of rainbow-graduated gemstones.

At US$790,000 this costs more than a pot of gold at the end of a rainbow, but par for the course as such things go. And given that the Tourbillon Rainbow is a limited edition of just two – one each in either colour of gold – the price is pretty much a moot point.

The new tourbillon is a variant of the Big Bang Integral, the chronograph with integrated bracelet unveiled last year.

Size wise, the tourbillon is nearly identical to the chronograph, at 43 mm wide and 13.75 mm high. While it’s a fairly compact package by Hublot standards, but makes an outsized statement on the wrist. 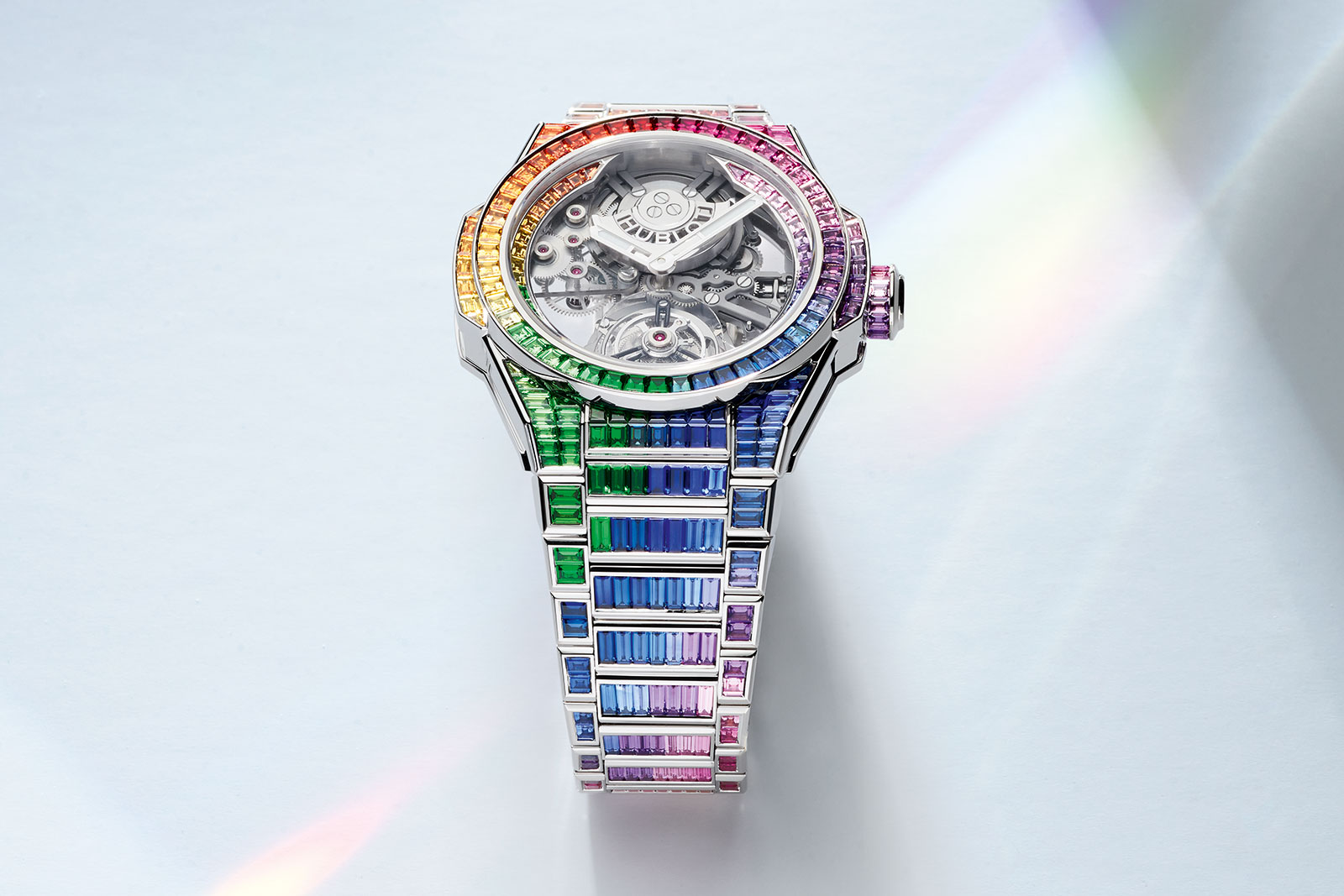 The gem setting takes about 1200 hours per watch according to Hublot, encompassing stone selection, cutting, and setting. 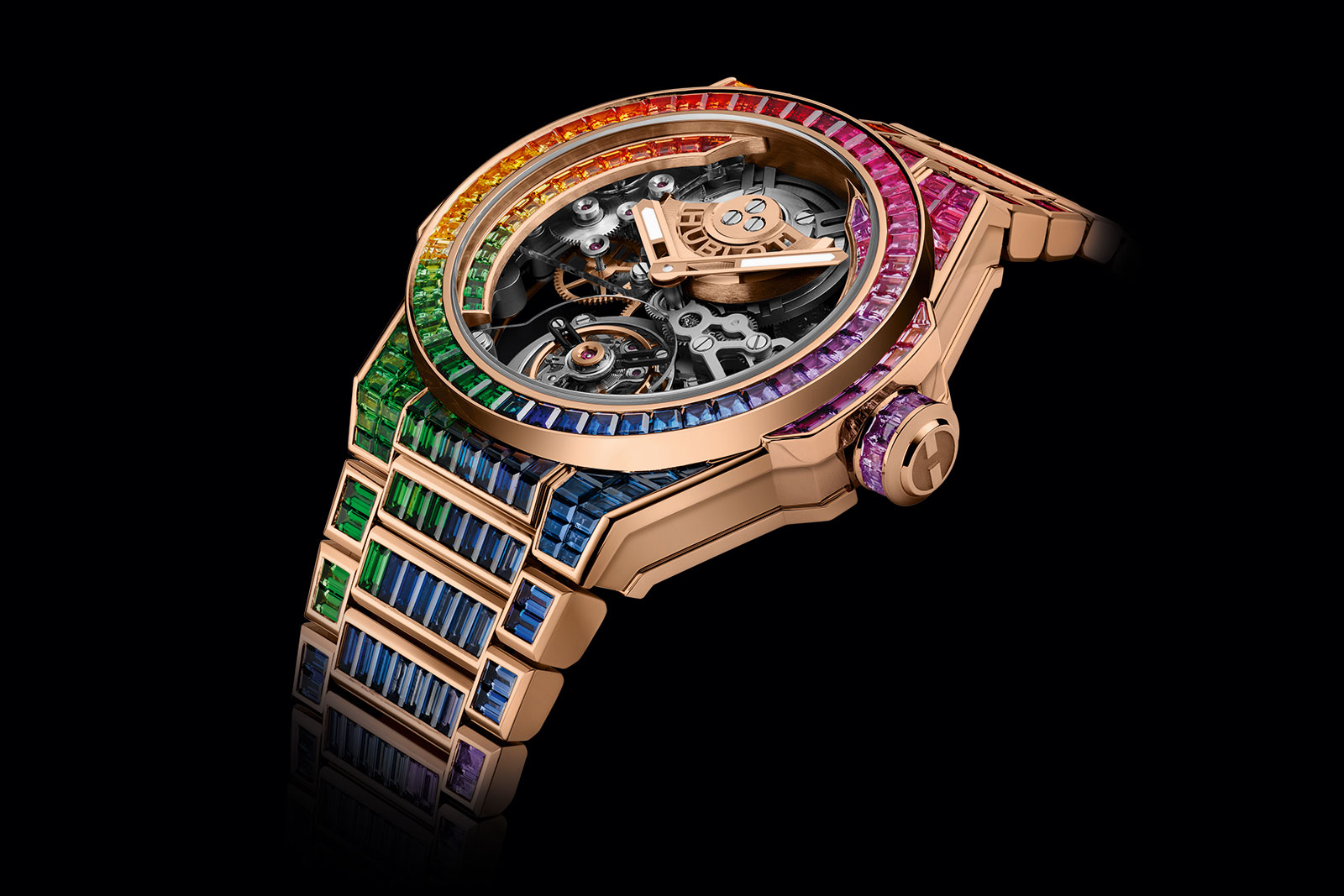 All of the top surfaces of the case and bracelet are set with coloured gemstones, while the flanks are left as polished metal 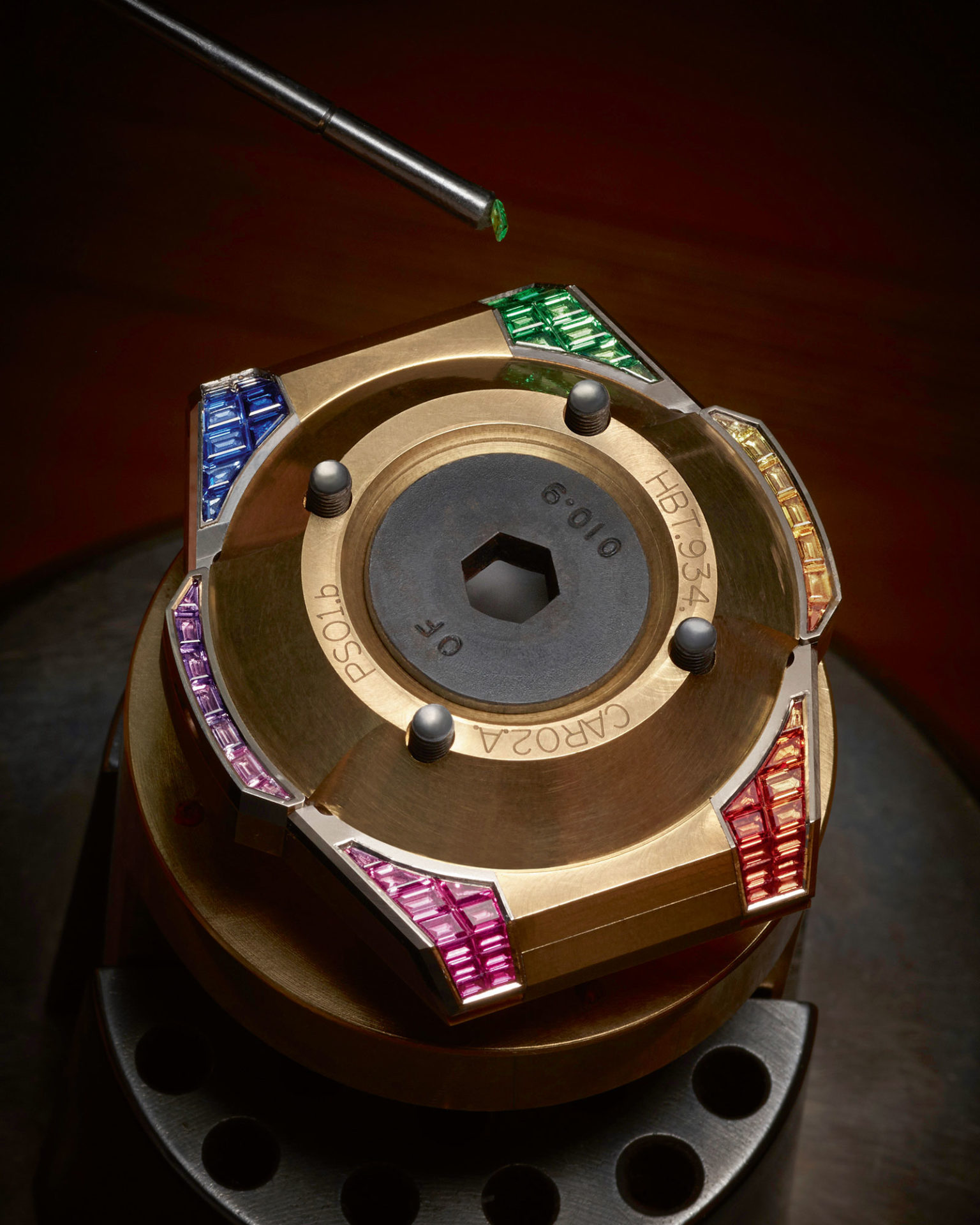 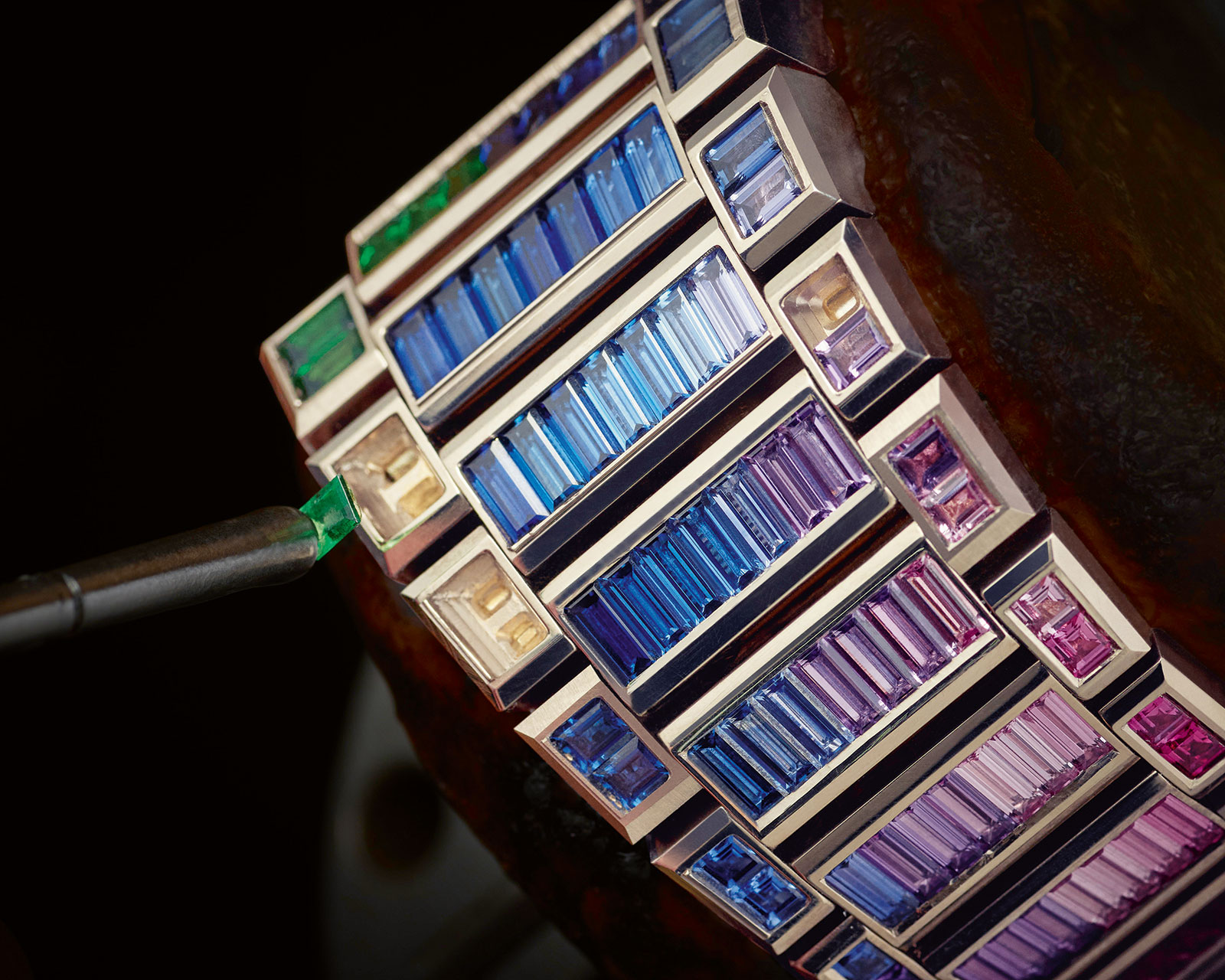 Inside is the HUB6035, an in-house automatic movement wound by a discreetly positioned micro-rotor on the dial. Positioned on the same axis as the barrel, the 22k-gold micro-rotor also serves as the branding for the dial. 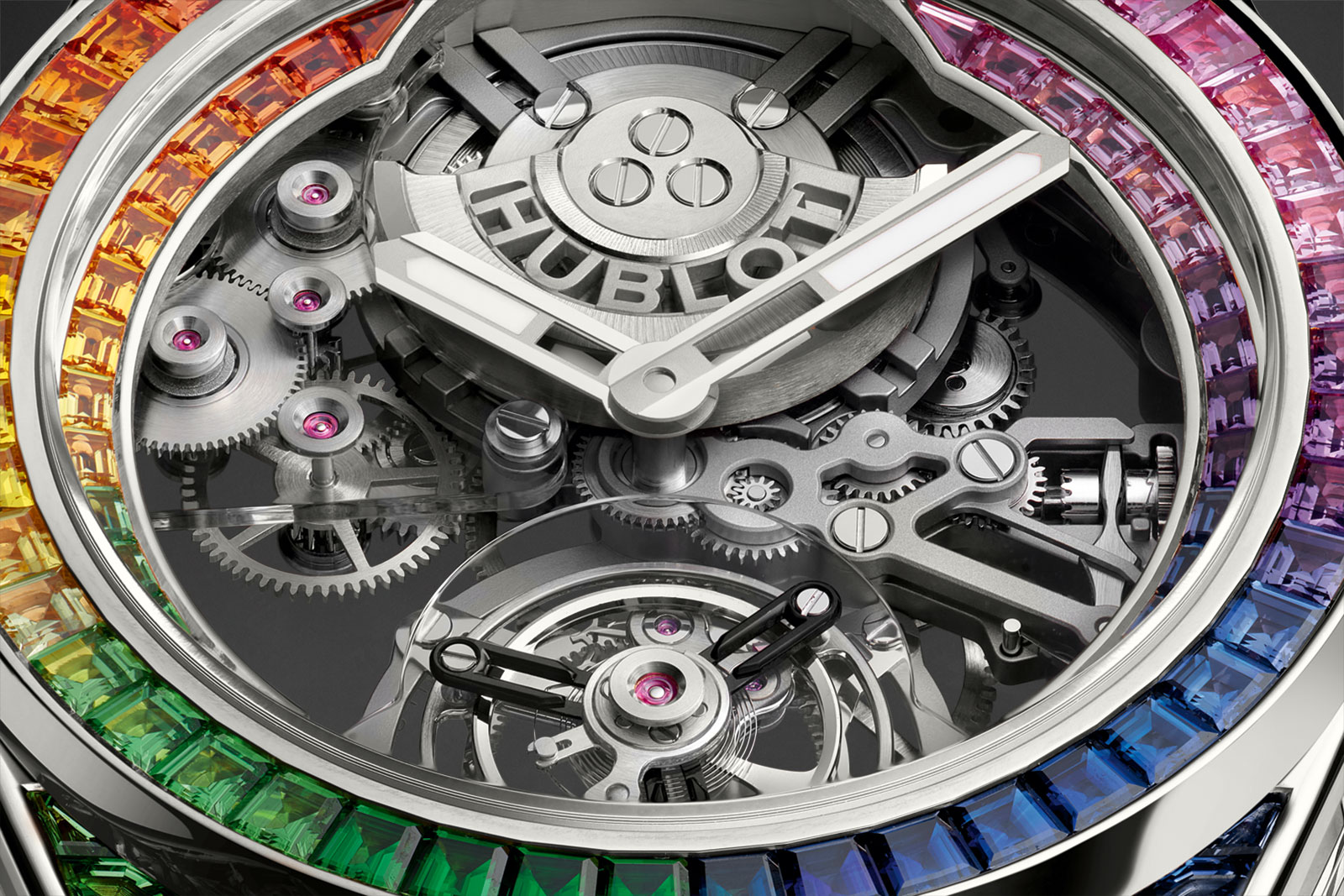 Constructed to appear like it’s floating, the appealingly transparent movement is secured by a trio of clear sapphire bridges – the base plate along with bridges for the tourbillon and going train. 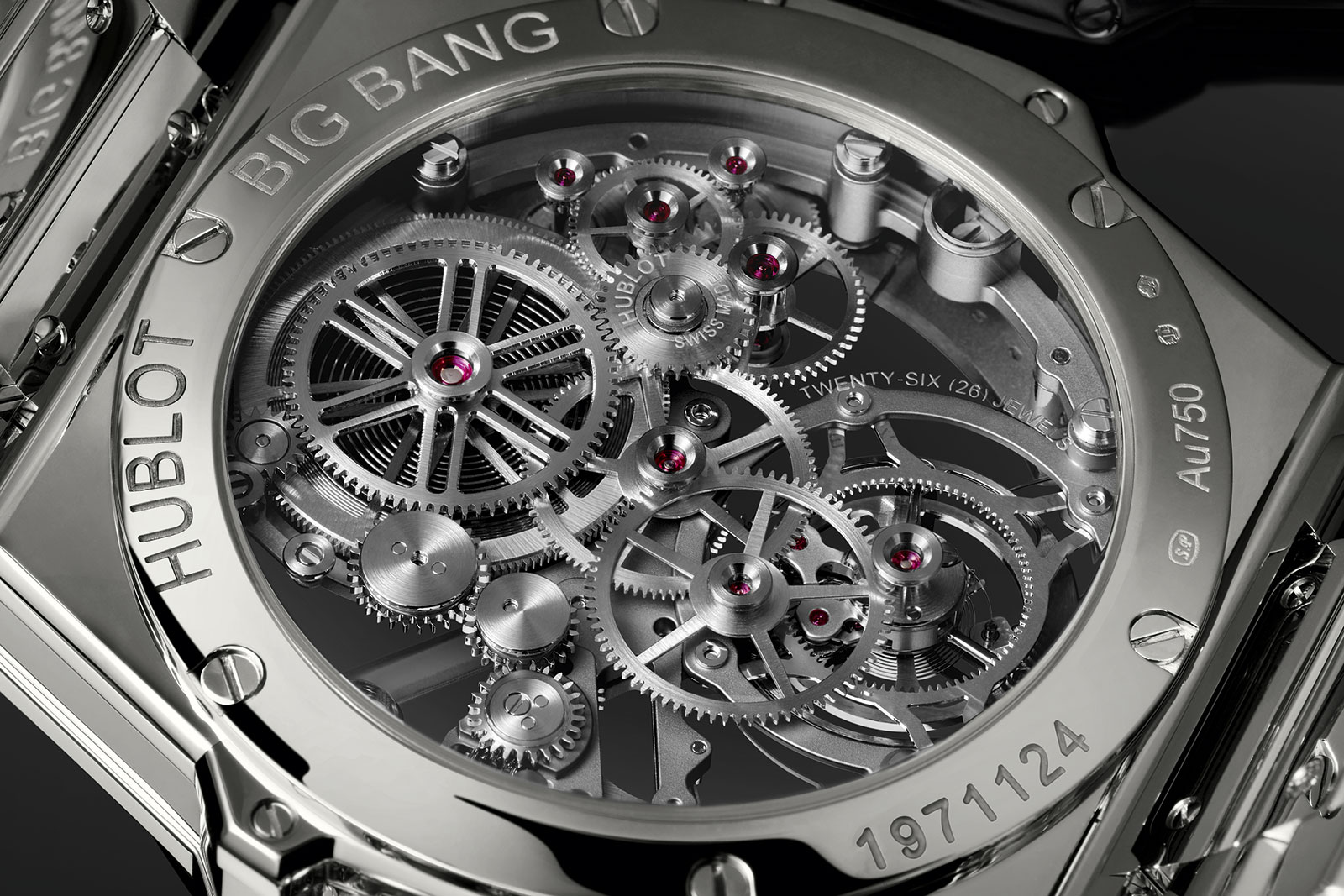 Limited edition: Unique piece of one each in colour of gold
Availability: From Hublot boutiques and retailers
Price: US$790,000