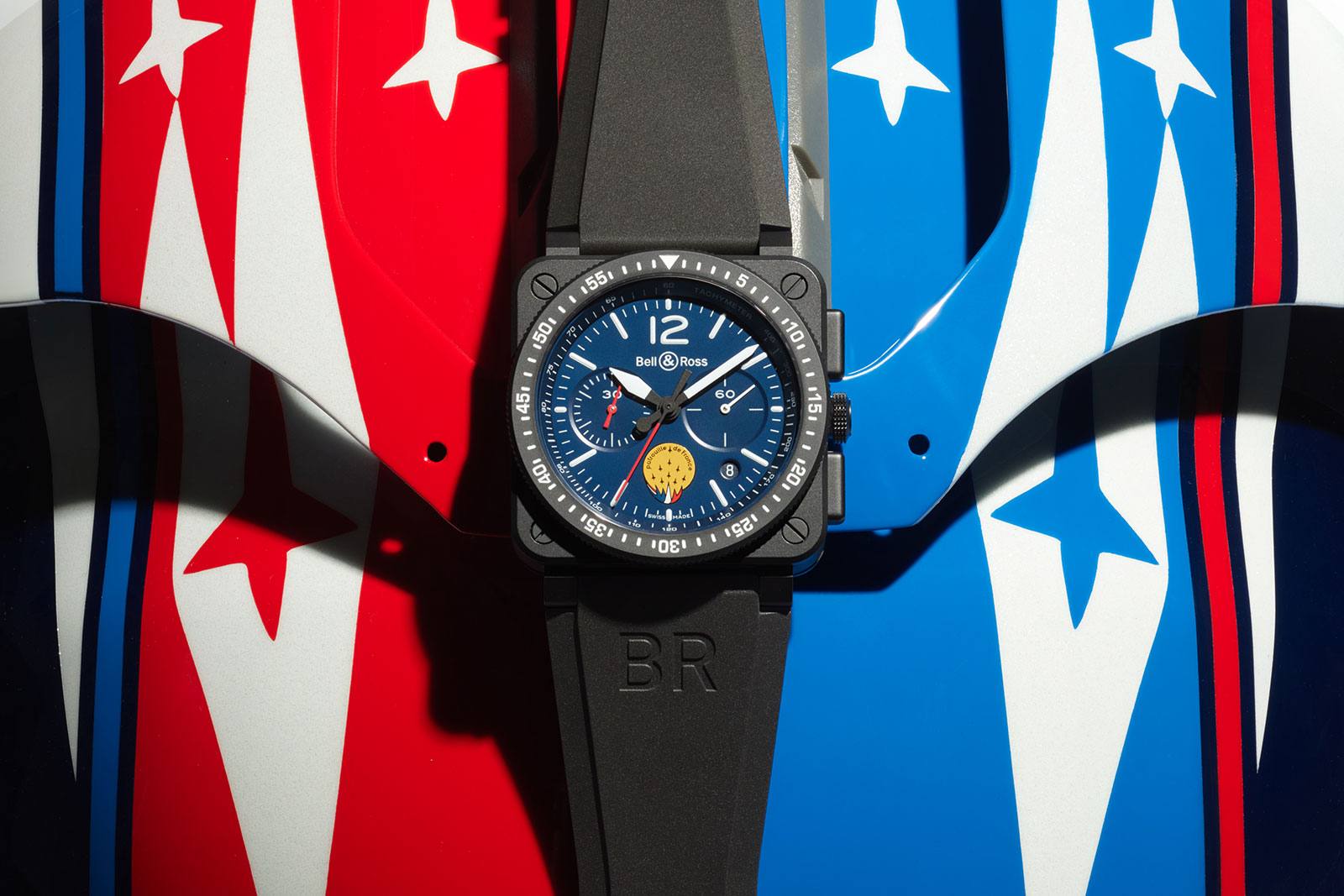 Bell & Ross has long supplied timekeepers to various French military and police units, ranging from the bomb disposal team of the national civil defence agency to the tactical unit of the National Gendarmerie, GIGN. The brand was recently tapped to become the official watchmaker to the Patrouille de France, the famed aeronautics team of the Armée de l’Air et de l’Espace, the French Air and Space Force.

To inaugurate the partnership, Bell & Ross has unveiled the BR 03-94 Patrouille de France, a limited edition designed in collaboration with the nine pilots of the aerobatics team. Cased in matte black ceramic, the chronograph has a dial in the colours of the French flag, along with the team logo at six o’clock. It is a 500-piece limited edition available to the public, while team members of the Patrouille de France will be issued with the same watch, but powered by a quartz movement. 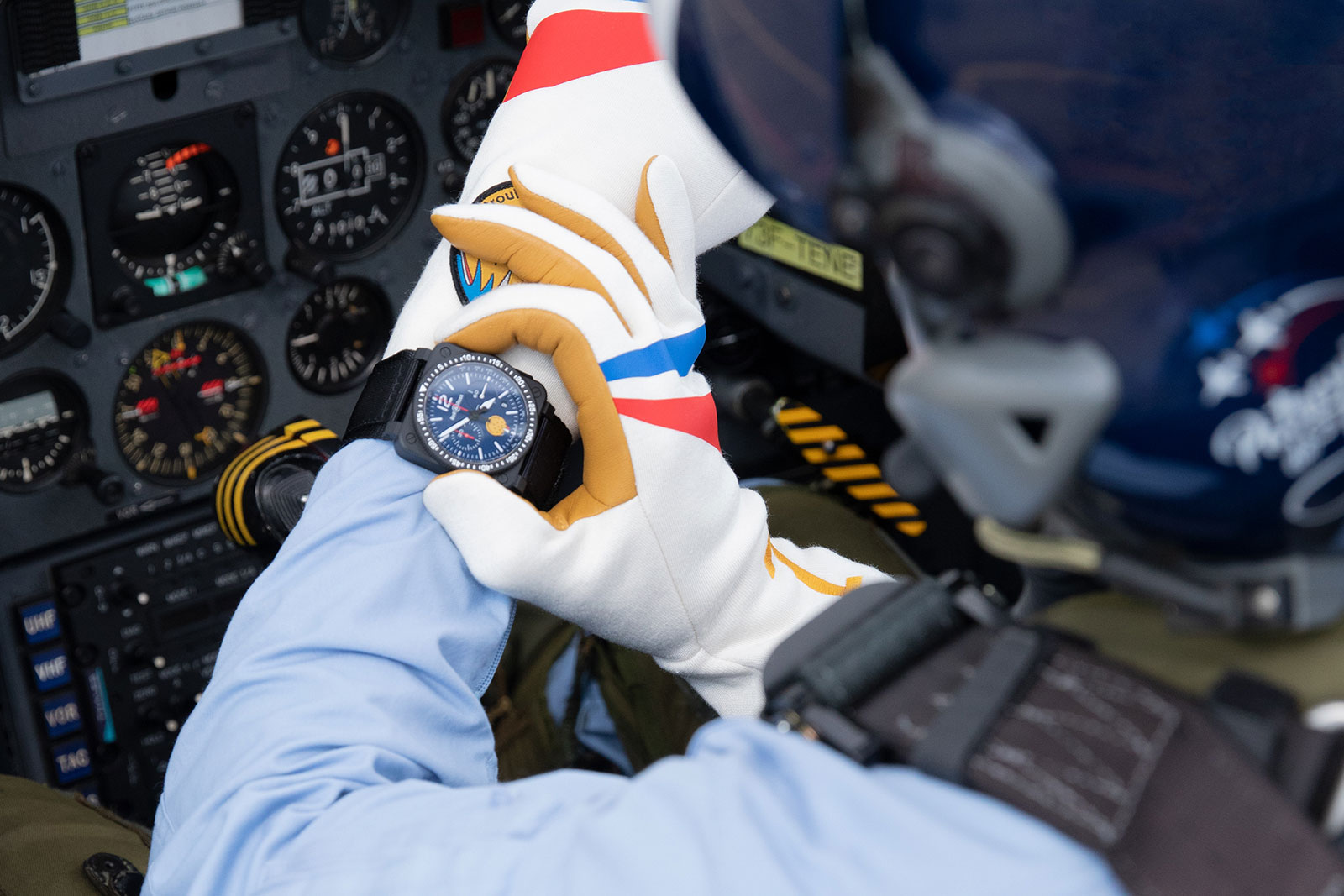 Bell & Ross has made a variety of air force-unit watches in the past, as have other brands. Breitling, for instance, recently debuted an edition dedicated to the Red Arrows, the aerobatics team of the Royal Air Force.

Produced in a run of 100 watches, the official-issue team watch is identical to the civilian version featured here, but it has a quartz movement – a necessary concession for cost and perhaps shock resistance. The fact that the team pilots are wearing essentially the same thing makes the Patrouille de France edition pretty cool.

And it helps that the watch itself is good looking – the tricolour dial is appealing – and reasonably affordable. 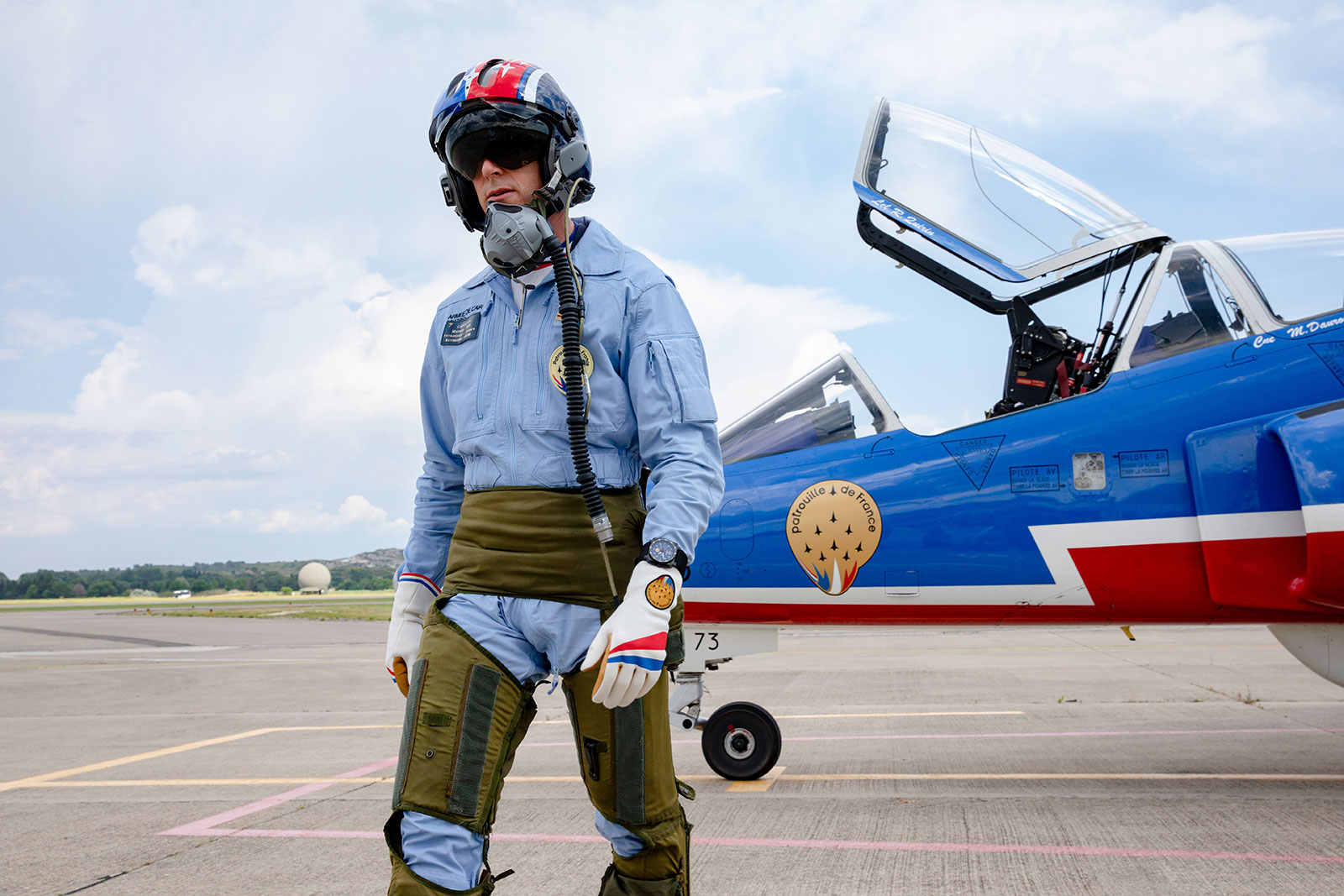 The Patrouille de France edition is essentially a BR 03-94 with the addition of a rotating bezel and new dial, albeit in good-looking livery.

Mostly blue with accents of red and white, the dial is dressed in the French tricolour. Nearly perfect in its symmetry, the dial is executed in a grained, metallic blue. It features stamped, recessed registers at three and nine, along with the Patrouille de France emblem at six o’clock. A surprisingly discreet date sits in between four and five o’clock – it’s smallish and in the same colour as the dial, allowing it to blend in. 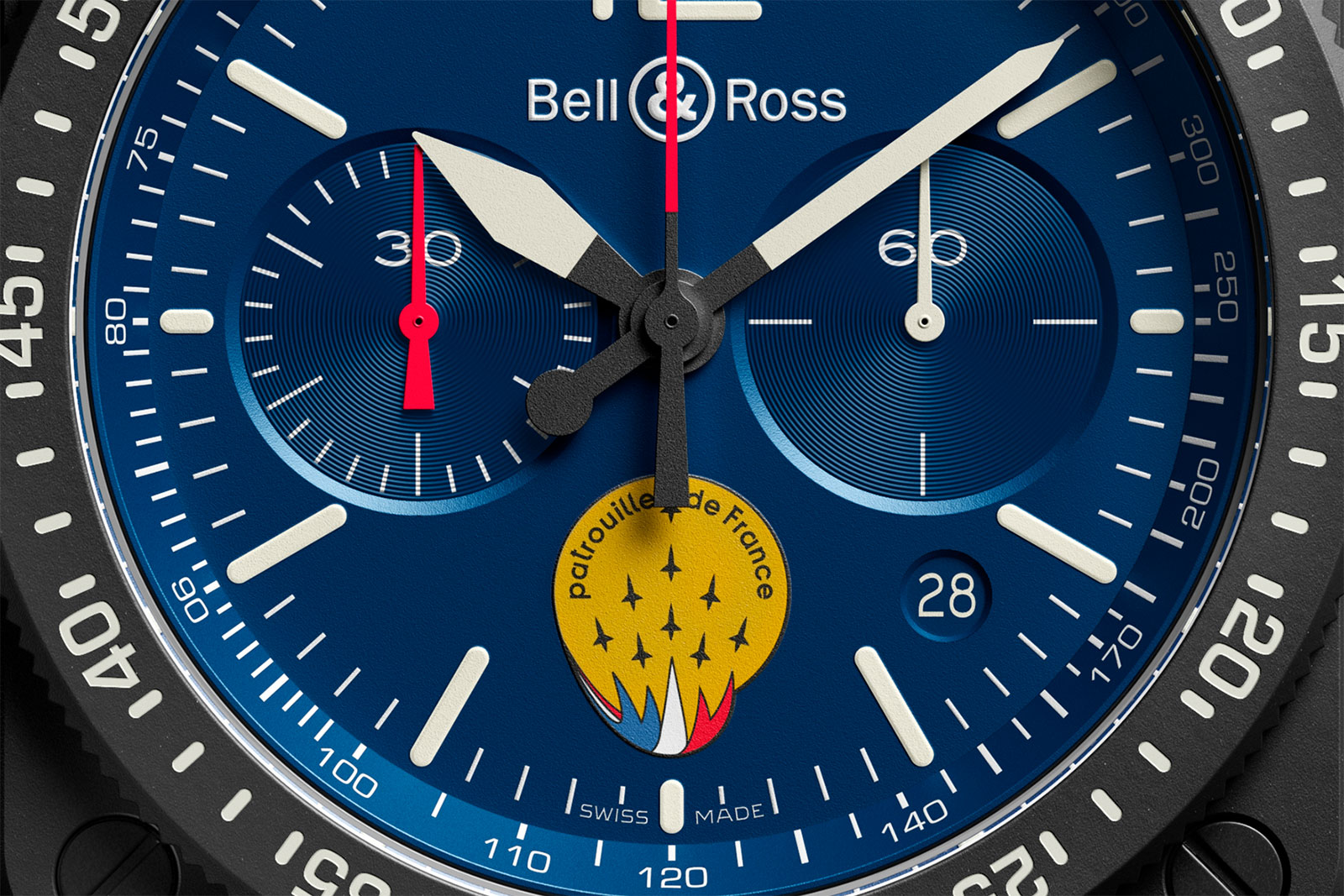 The case is matte black ceramic, rendering it scratch-resistant and non-reflective. Though it might seem large due to the square shape, it’s a wearable 42 mm in diameter.

Inside is the BR-CAL.301, a no-frills and reliable movement that’s actually an ETA 2892 with a Dubois-Depraz chronograph module on top. 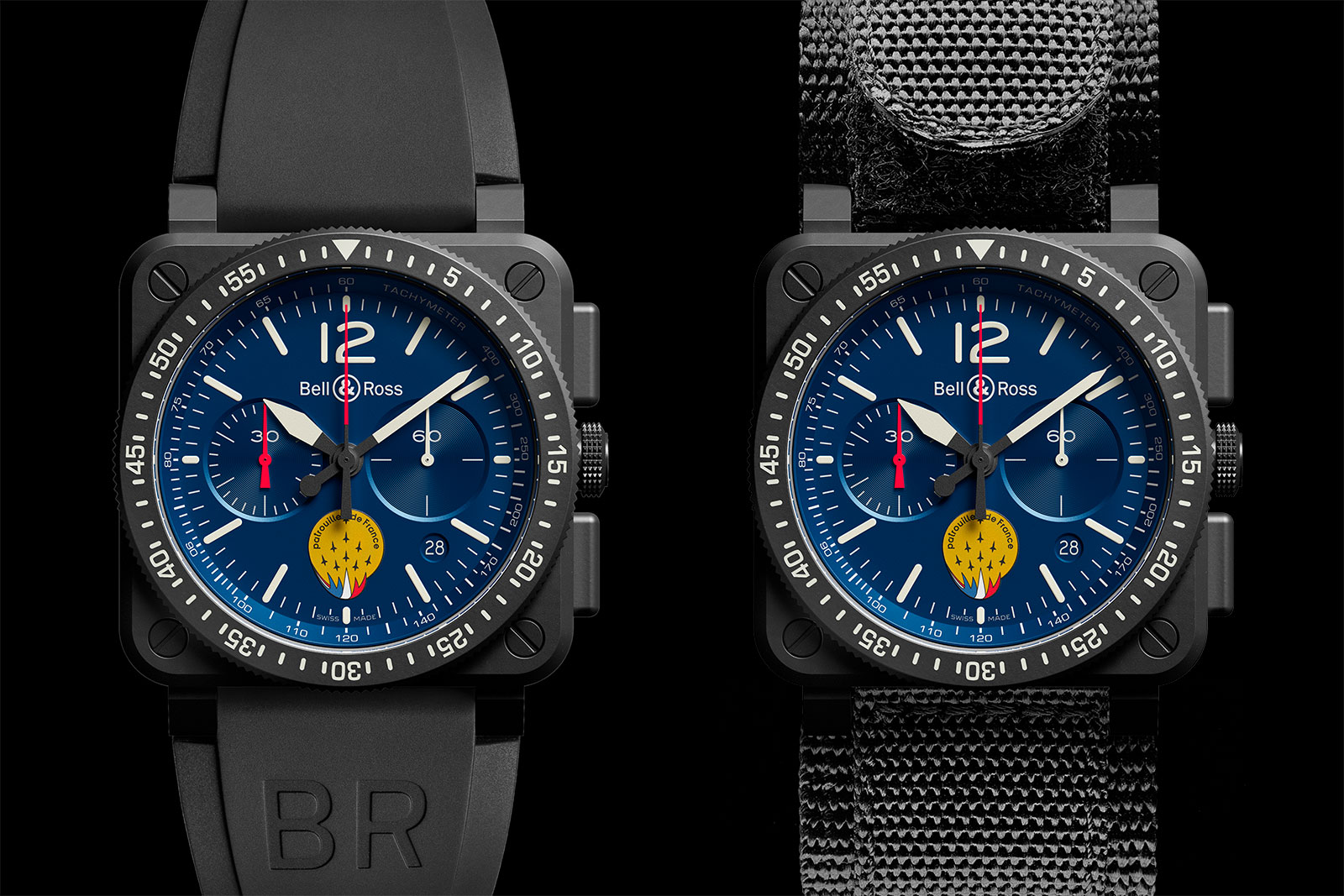