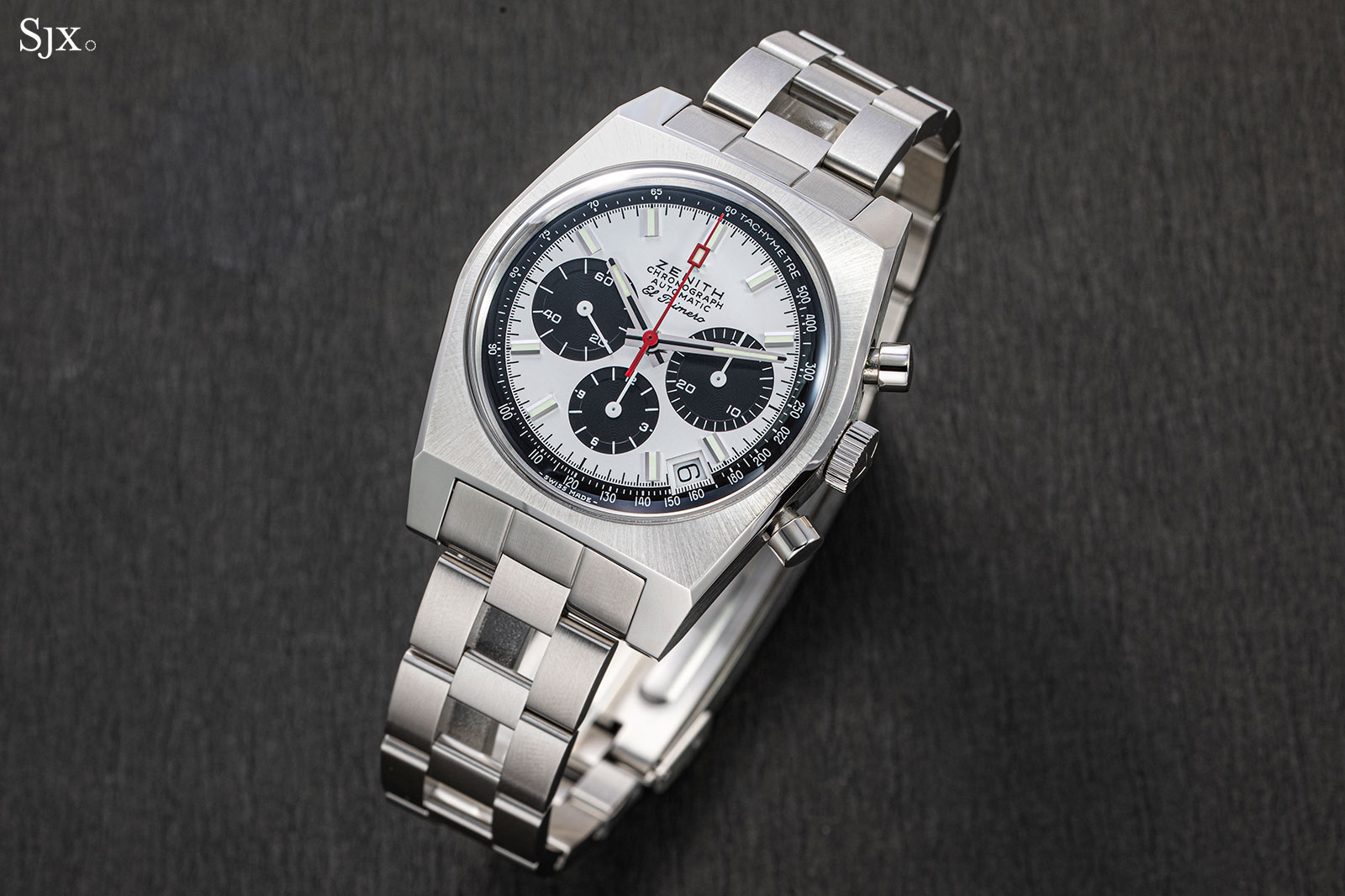 There are few brands that can make modern-day reissues of historical watches powered by the same movement as the vintage original. Zenith, as it happens, is easily able to, thanks to its long-lived El Primero.

The chronograph movement celebrated its 50th anniversary last year with several commemorative A386 limited editions, including a one-off in platinum for charity, but most were in gold and thus pricey. On the other hand, the El Primero A384 Revival is a faithful remake – including a “ladder” bracelet – that’s part of the regular collection, and also affordable. 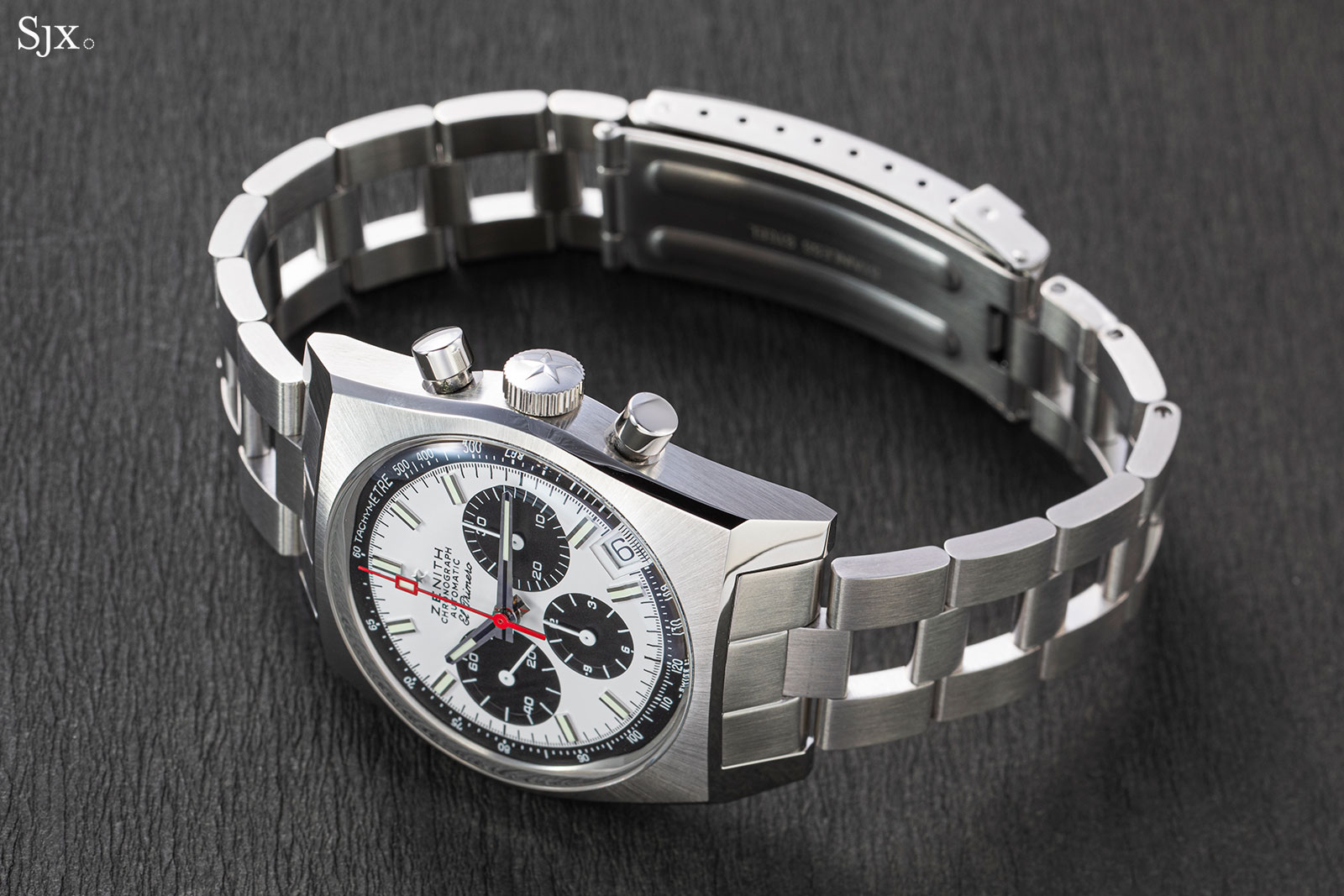 While the A386 is the iconic El Primero chronograph – and today the most valuable – the A384 was introduced at the same time (along with the A385), making it part of the debut range of El Primero watches.

One reason the A384 doesn’t quite have the stature of the round and relatively-ageless A386 is also one of its most distinctive qualities: a tonneau- or cushion-shaped case that instantly identifies it as a watch of the late 1960s and 1970s.

The easily recognisable design has made the tonneau-shaped A384 a popular base for a variety of limited editions, including one based on a fictitious watch featured in the Japanese manga Lupin III. Romain Marietta, the brand’s chief of products, also indicated during a recent conversation that the A384 will continue to be the base for limited editions, while the A386 will not be reproduced again except in exceptional instances since it is synonyms with the El Primero anniversary.

The El Primero Revival A384 Edge of Space, a collaboration with Bamford Watch Department and Mr Porter. Photo – Zenith

The El Primero A384 Lupin The Third Edition that was available only in Japan. Photo – Zenith

The remake nails it in reproducing the look and feel of the original. The case has the same 37 mm diameter, and at 12.6 mm is almost (or maybe exactly) the same height as the original, though it has the modern necessity of a display back. 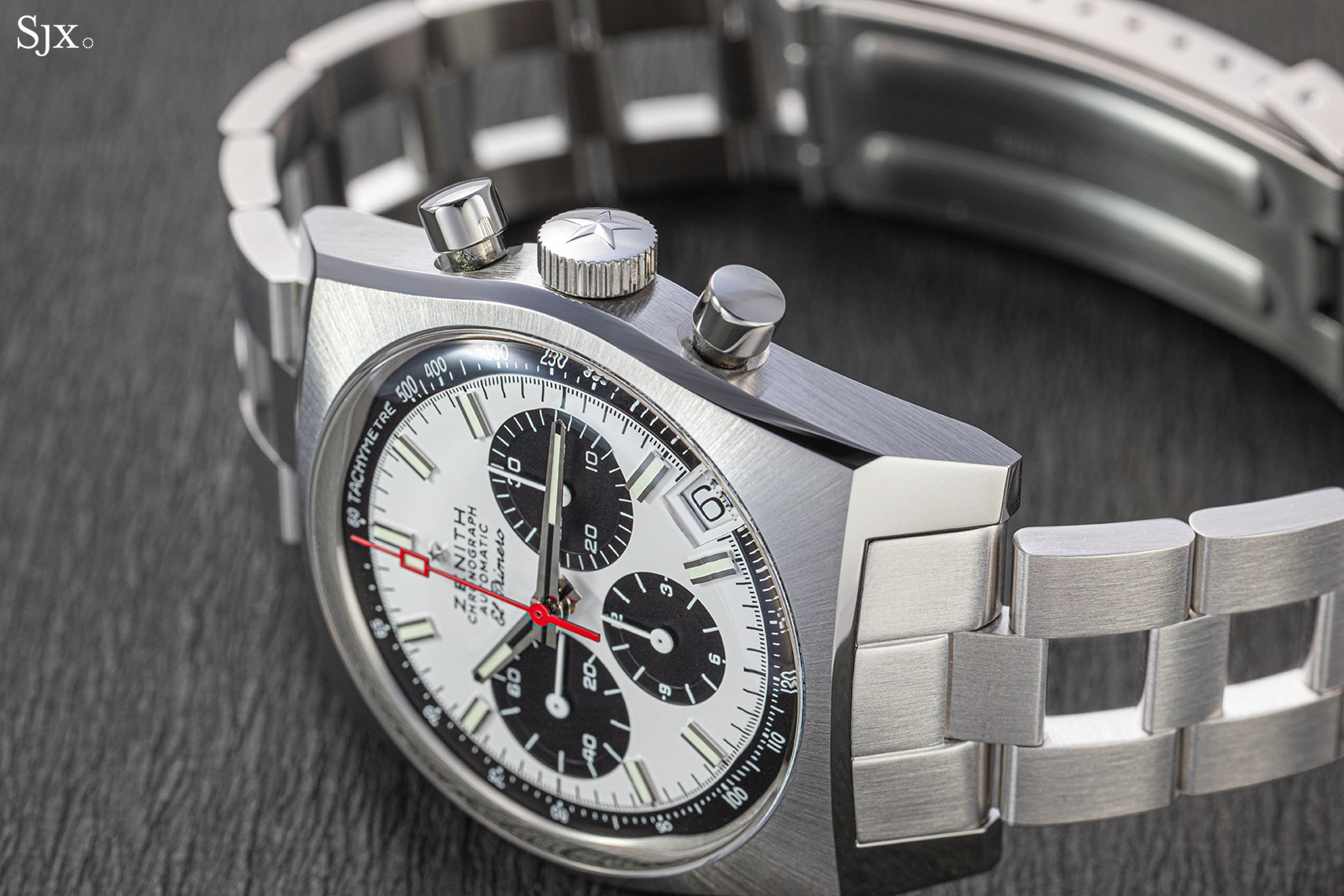 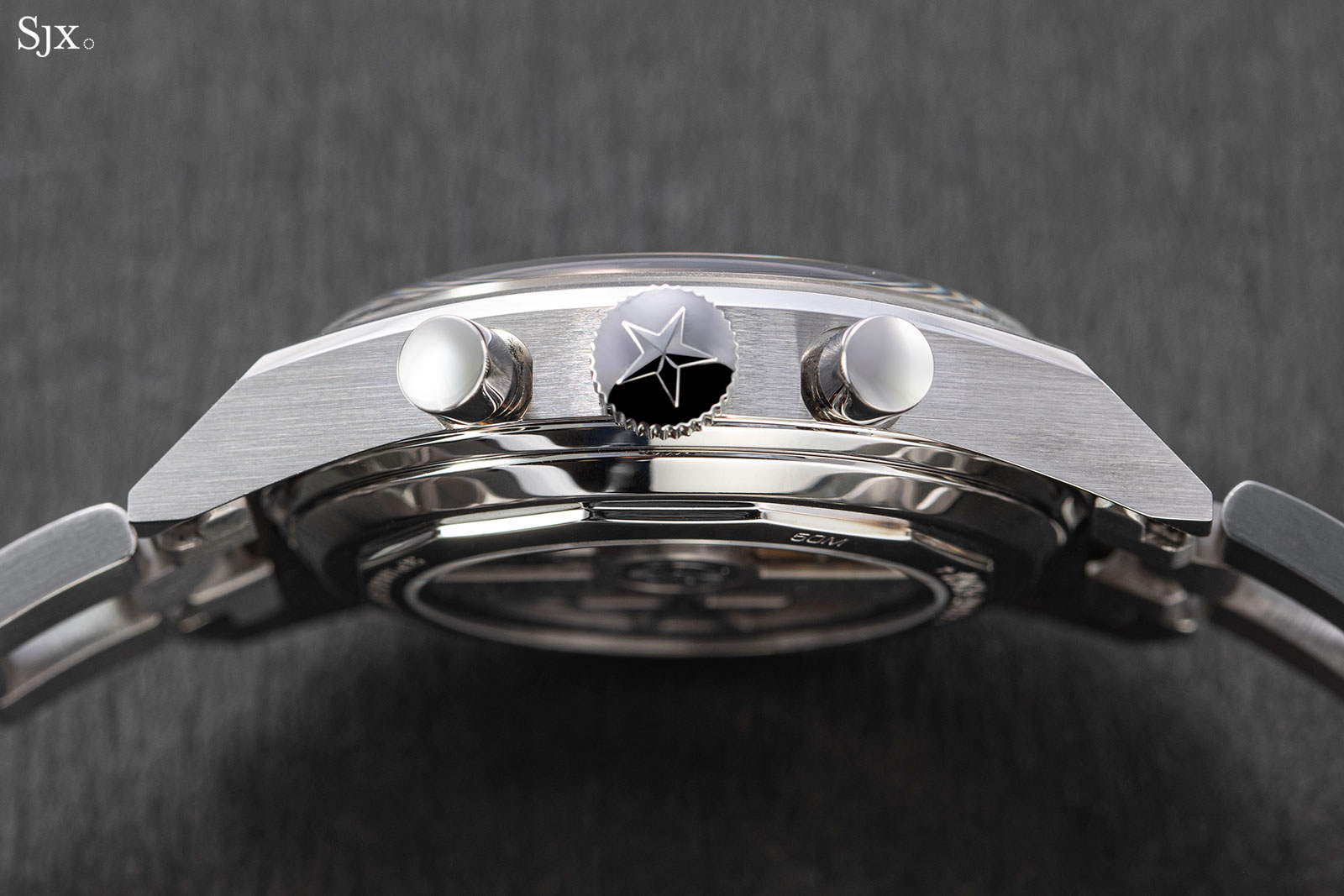 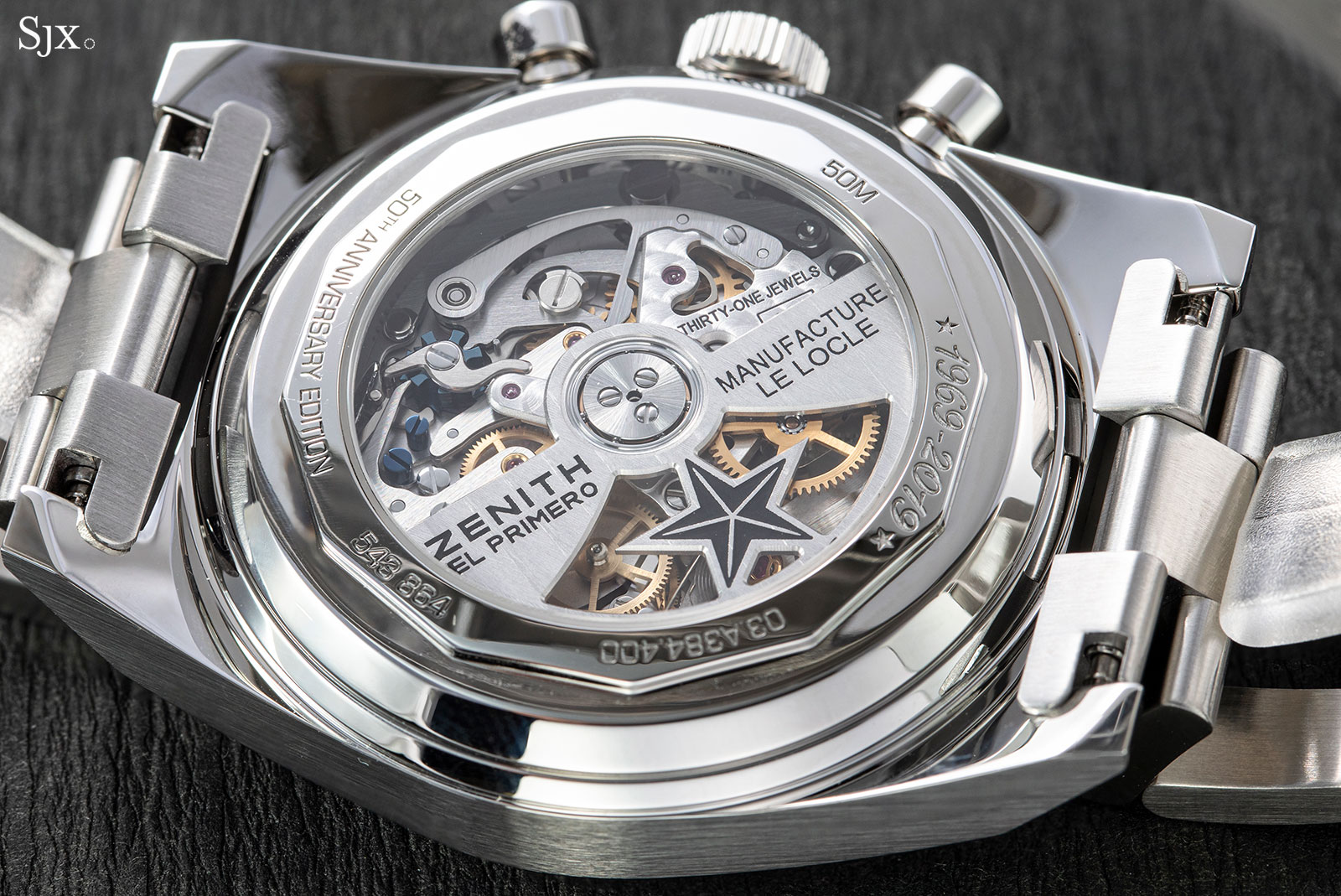 Just as importantly, the details of the case are true to the original, including the facets on the sides and lugs, and more crucially, the fine, radial brushed finish on the bezel. In fact, the finishing of the case seems superior – neater and sharper – than on the original, based on memory of a handful of “new old stock” A384s I’ve examined in the past. 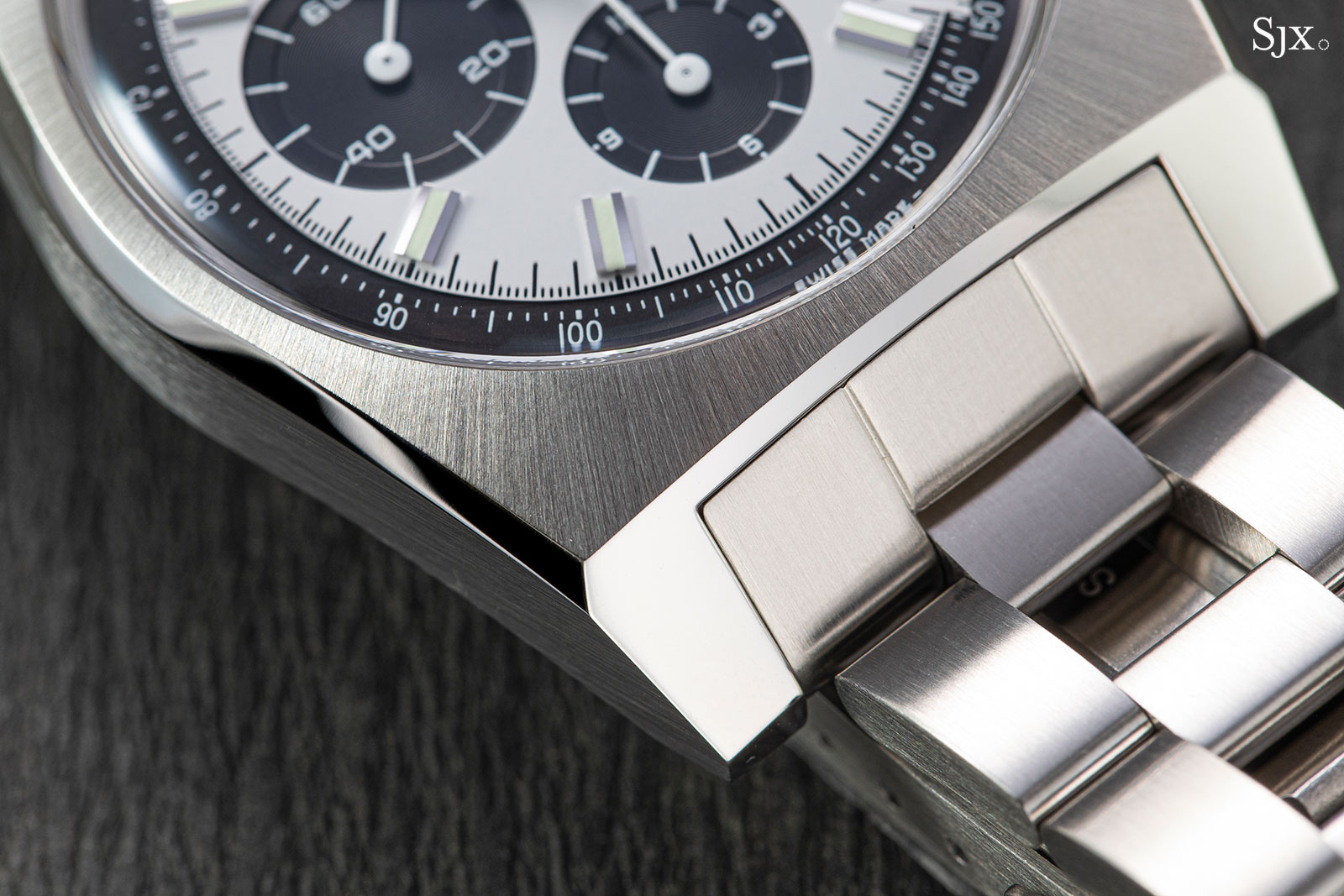 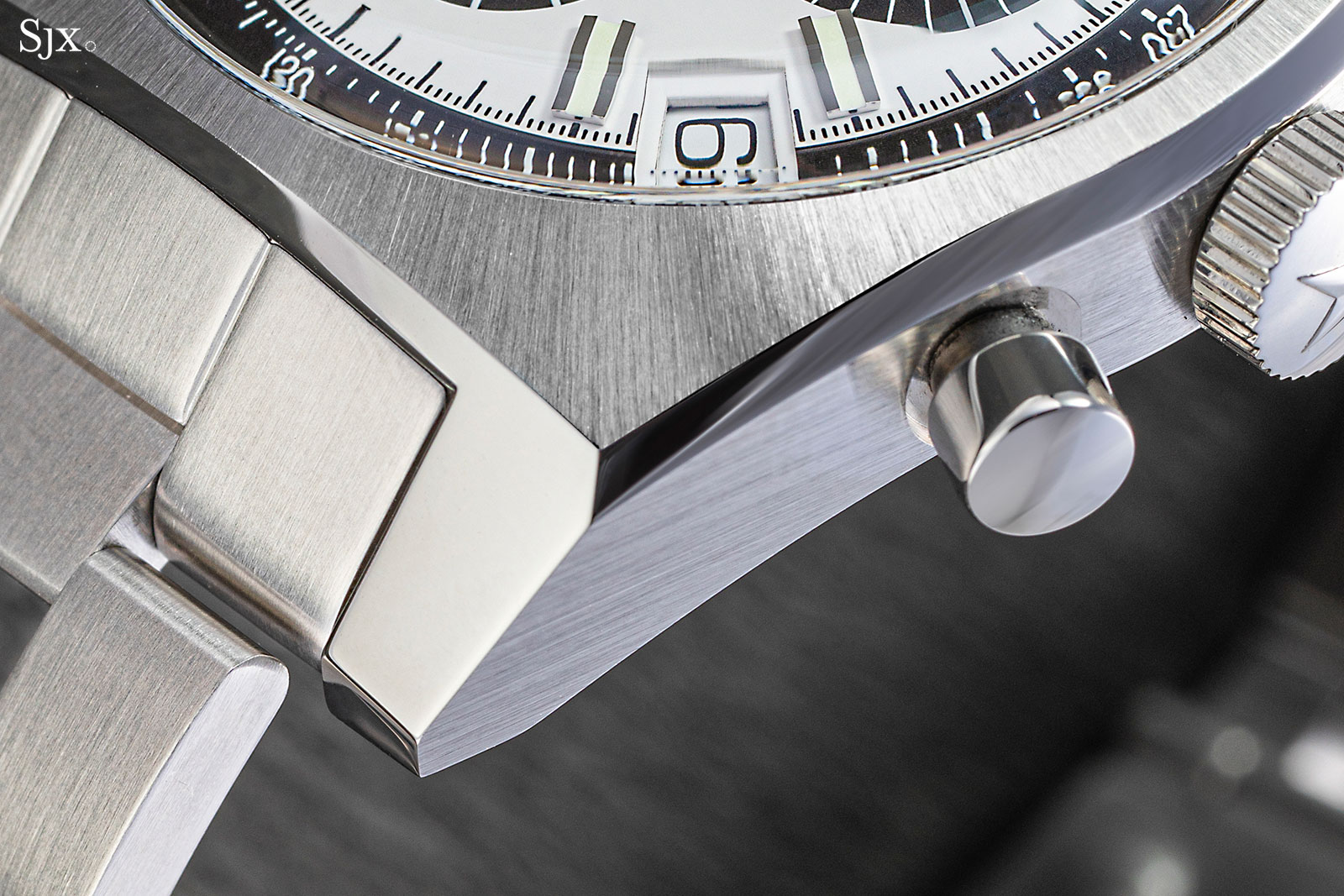 The bracelet is an integral part of the A384 remake – though it’s also available on a strap – and Zenith also got it right. Originally produced by Gay Freres, a jewellery producer that was also leading watch bracelet maker in the 20th century, the “ladder” bracelet feels very much like the original.

Named after the shape of its links, the bracelet is marginally heftier than the dinky original, but is still lightweight by the standards of contemporary bracelets. The remake bracelet retains the stamped clasp parts, which is a vital detail in conveying the vintage feel.

Though the bracelet doesn’t have the robust quality of modern bracelet, that’s actually a plus, since it preserves the overall coherence of the remake, while also being affordable – the bracelet is an extra US$500. 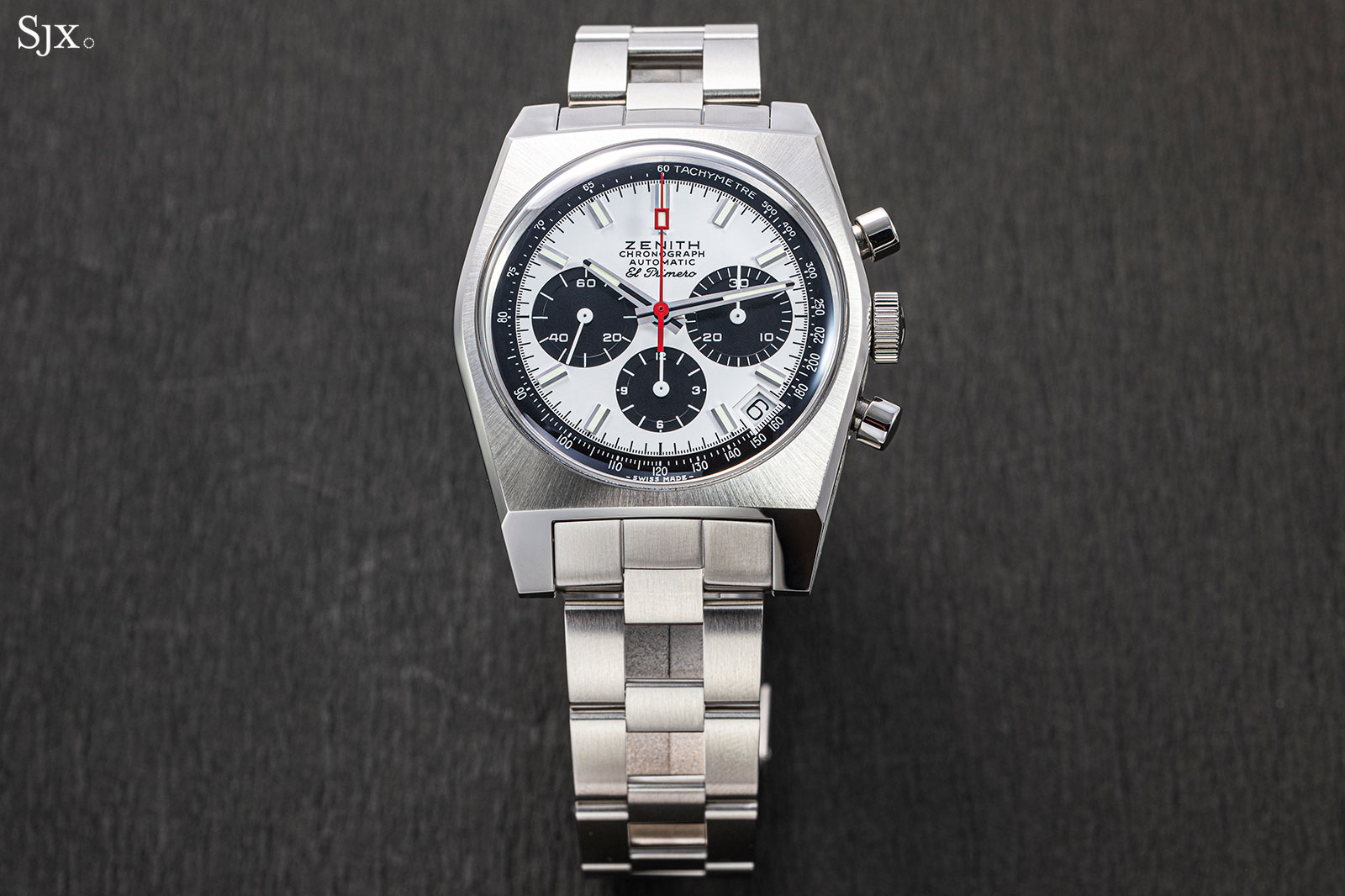 Similarly, the dial ably reproduces the original, down to minute details like the serifs on the seconds hashmarks at the quarters to the recessed step on the sub-dials. Some details do differ slightly, like the profile of the Zenith-star emblem and the weight of the letters at 12 o’clock, but the overall feel is right. 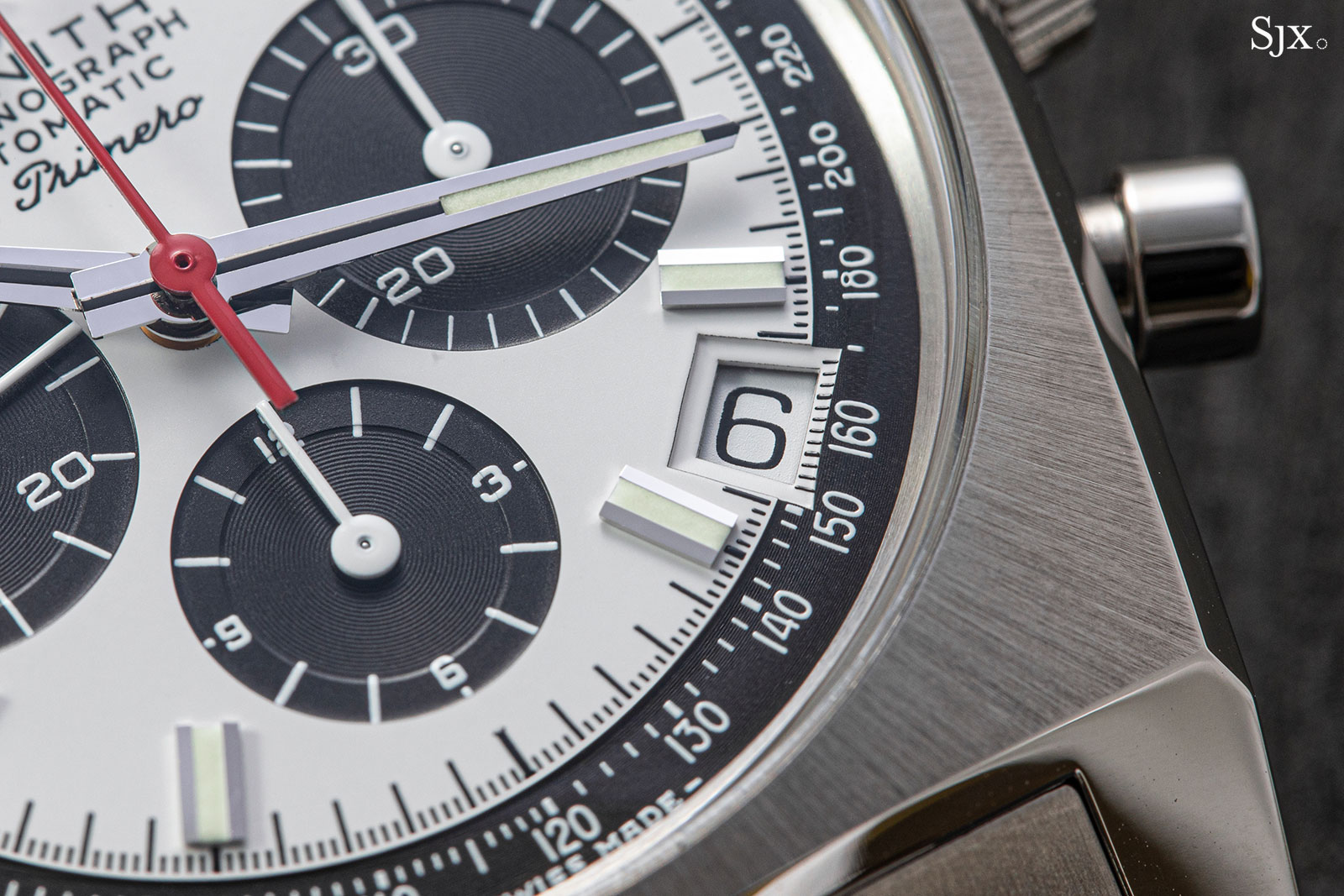 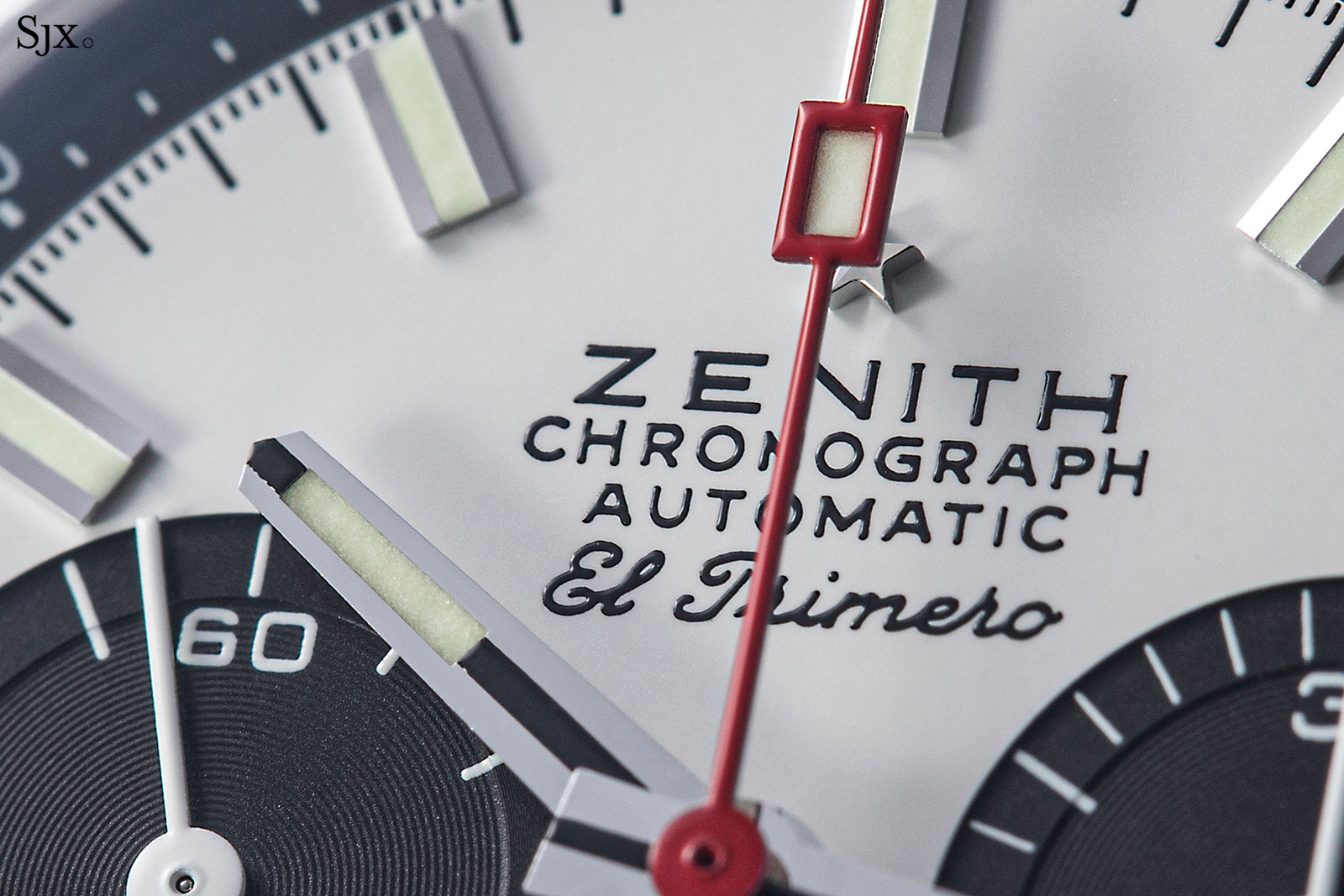 The El Primero 400 inside is almost exactly identical to the El Primero of 1969, though several technical details have been upgraded in the intervening 50 years, including the shape of some chronograph levers and cams. As a result, the modern-day El Primero is slightly more robust and easier to service. Perhaps more relevant for a buyer of the watch are the aesthetics of the movement – today’s El Primero 400 has been dressed up substantially compared to the original.

That means the rotor is finished with Geneva stripes, the bridges with perlage, and several screws are blued, as is the column wheel. More importantly, the levers and springs of the chronograph mechanism has also been decorated, mainly with straight graining on the top surfaces and a bit of bevelling on the edges.

While the finishing is done mostly by machine, as it should be at this price point, it is appealing and gives the movement a whole different style from the monochromatic and flat appearance of the original. So while the display back is not historically correct, it is well justified. Note the skeletonised heart-shaped cam for the reset mechanism, visible at bottom right 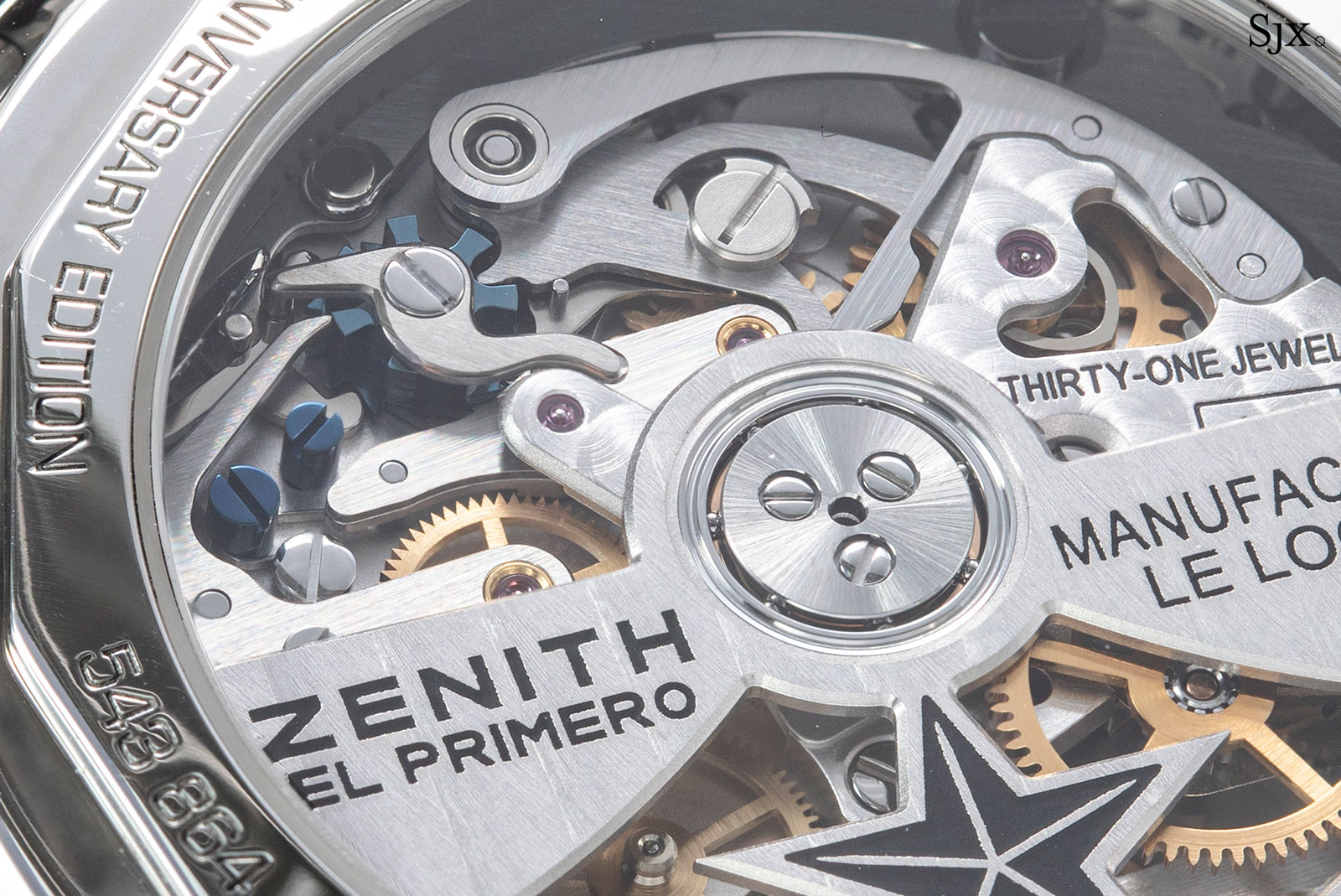 Faithful to the original in look and feel, the A384 remake has been upgraded where it is important or necessary, for instance with the movement decoration and construction. While it wins no prizes for imagination, the remake excels at what it wants to do, and it is difficult to imagine it doing any better.

The A384 Revival is an honest, well-priced watch, with the “ladder” bracelet being a nice touch that is definitely worth the additional US$500.

Limited edition: No, regular collection
Availability: Already in boutiques and retailers
Price: US$7,700 on strap; US$8,200 on bracelet