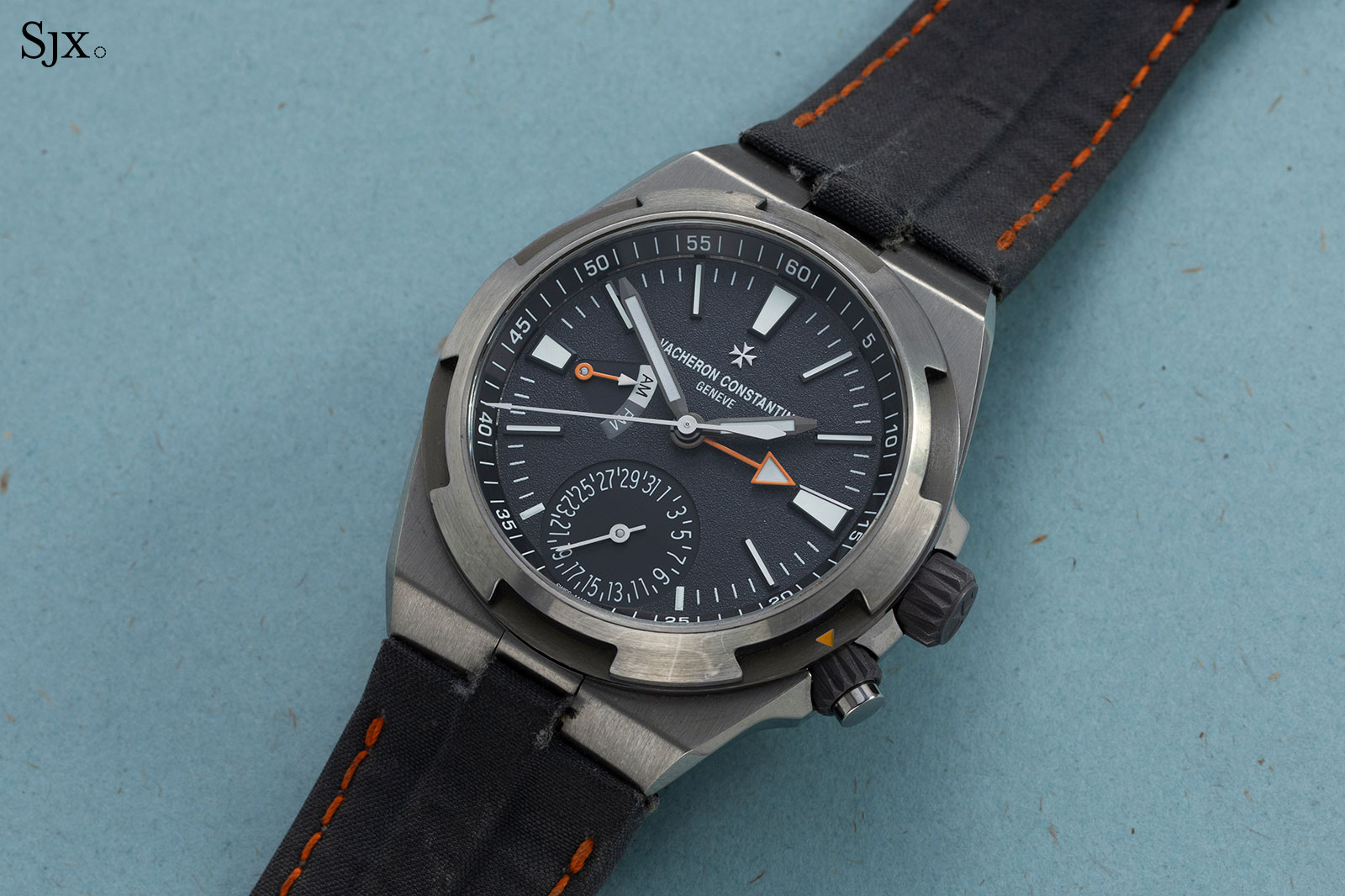 In early June 2019, American mountaineer Cory Richards embarked on his third attempt at scaling Mount Everest – after successfully reaching the summit twice before, including once without oxygen – but had to give up halfway due to dangerous weather. In fact, the year’s climbing season was one of the deadliest in recent years, with 11 climbers dead or missing.

Prior to his valiant but unsuccessful attempt at Everest, Mr Richards worked with Vacheron Constantin to develop a watch for the occasion. He wanted something light, robust and able to track two time zones. The result was the one-off Overseas Dual-Time prototype that looks a great deal more aggressive than the average Overseas. In fact, the designers at Vacheron Constantin managed to boost its presence and sportiness without bulking it up too much; the diameter remains the same.

Mr Richards wore the watch up Everest, and now Vacheron Constantin has donated it to charity. Exactly as it was when Mr Richards left Mount Everest, with scratches on the case and fraying on the strap, the prototype will be sold at Phillips’ upcoming New York watch auction, with all proceeds going to the National Geographic Society. Though identical in size to the standard Overseas Dual Time – the case is 41mm in diameter – this prototype has a bulked-up case, primarily with the addition of guards for both its crowns.

At the same time, the hands and hour markers are wider, and the second time zone hand is in orange, boosting legibility and adding to the no-nonsense style. 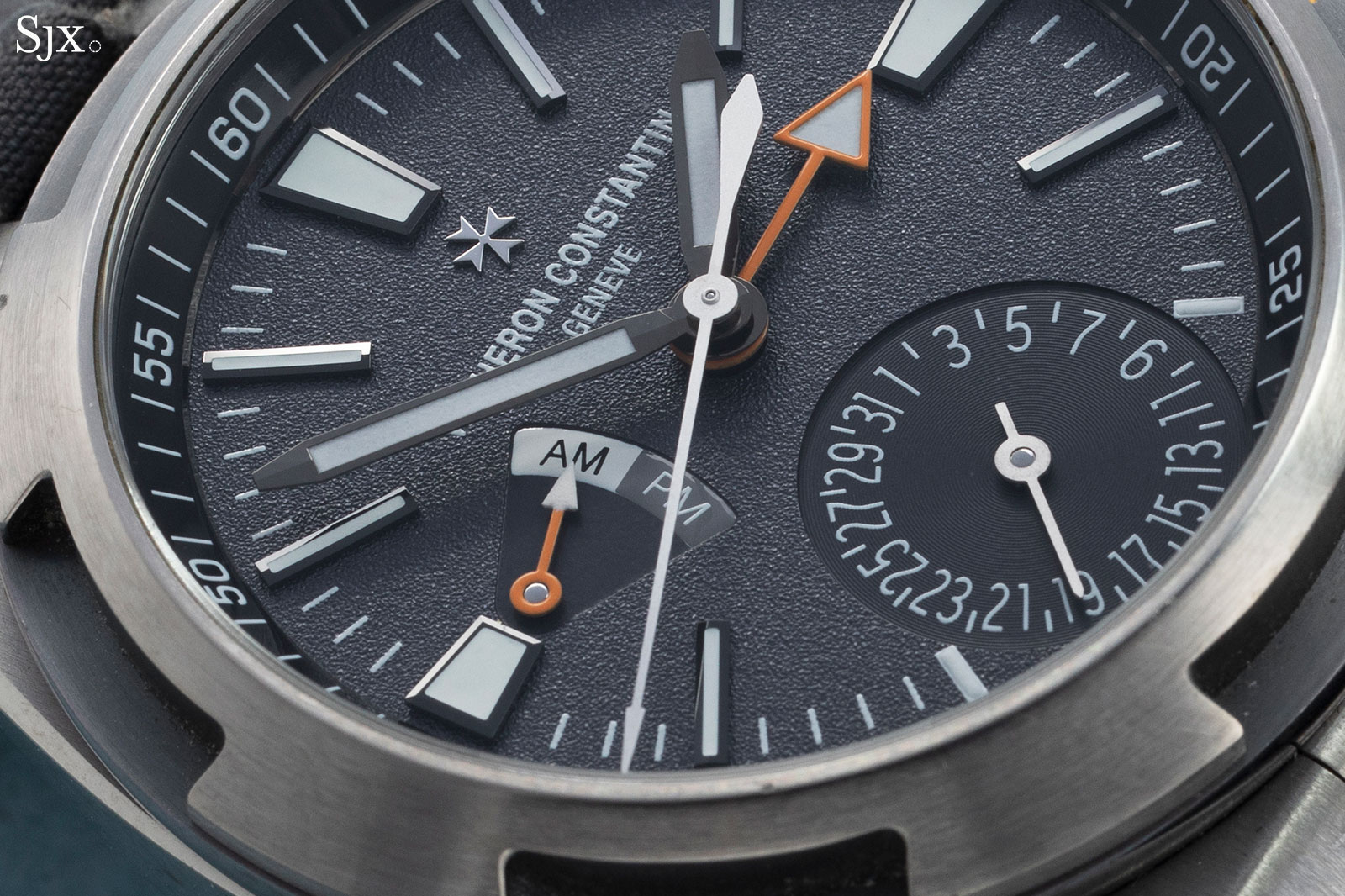 Though large, the watch is relatively lightweight as the case is brushed titanium, with the bezel base in tantalum that results in a subtle two-tone appearance. Though tantalum is dense and heavy, its use is minimal, so there is a negligible gain in weight. 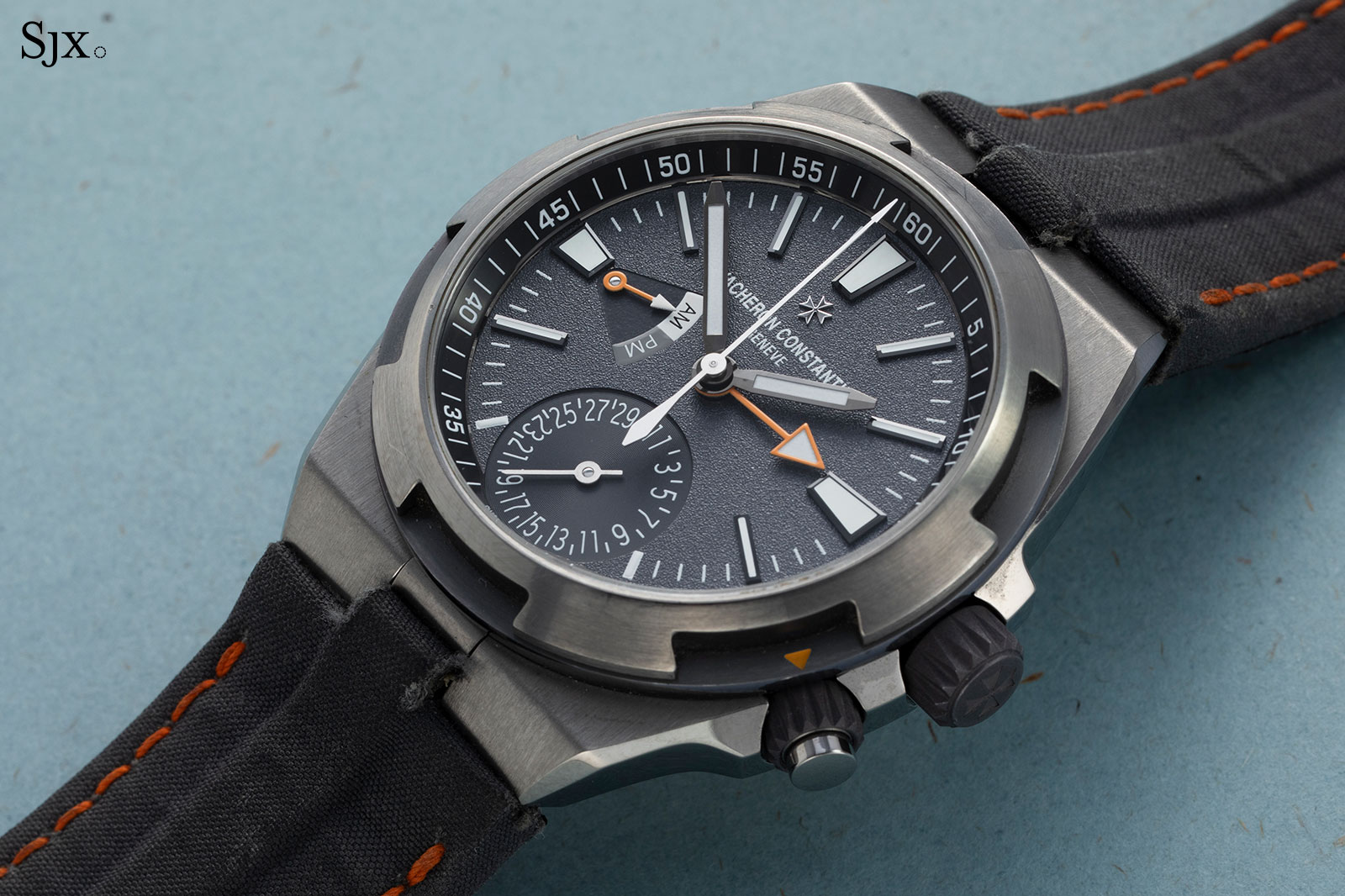 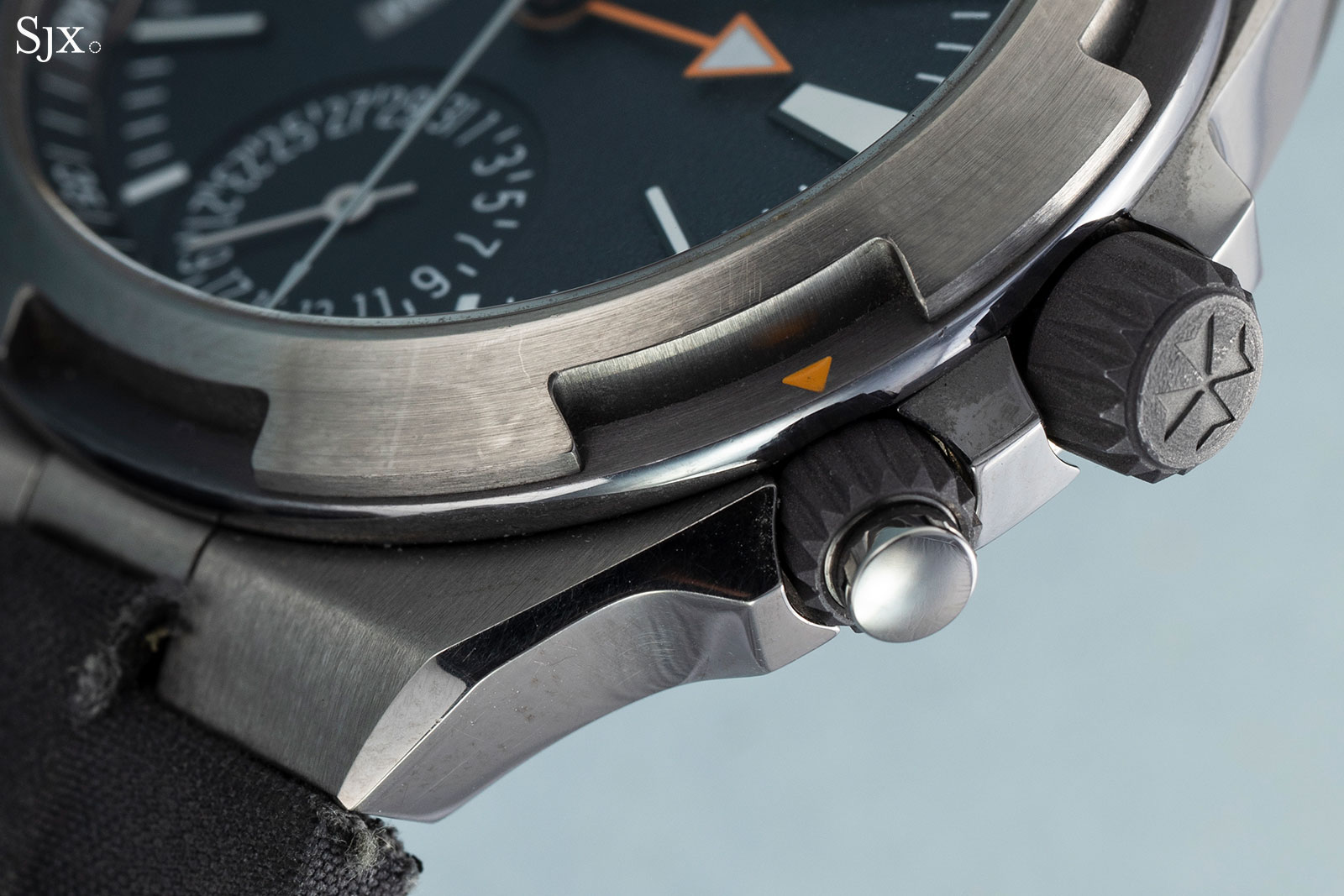 Rendered in a bluish-grey that’s similar to the colour of tantalum, the dial has granular finish, while the hour markers are in black-coated 18k gold. The cal. 5110 DT inside is mechanically identical to the standard movement, but its bridges and base plate have been finished in a dark grey NAC plating.

More unusually, instead of the Vacheron Constantin logo found on the stock Overseas movements, this has a 22k gold rotor bearing a relief of Mount Everest that replicates a photo taken by Mr Richards himself. 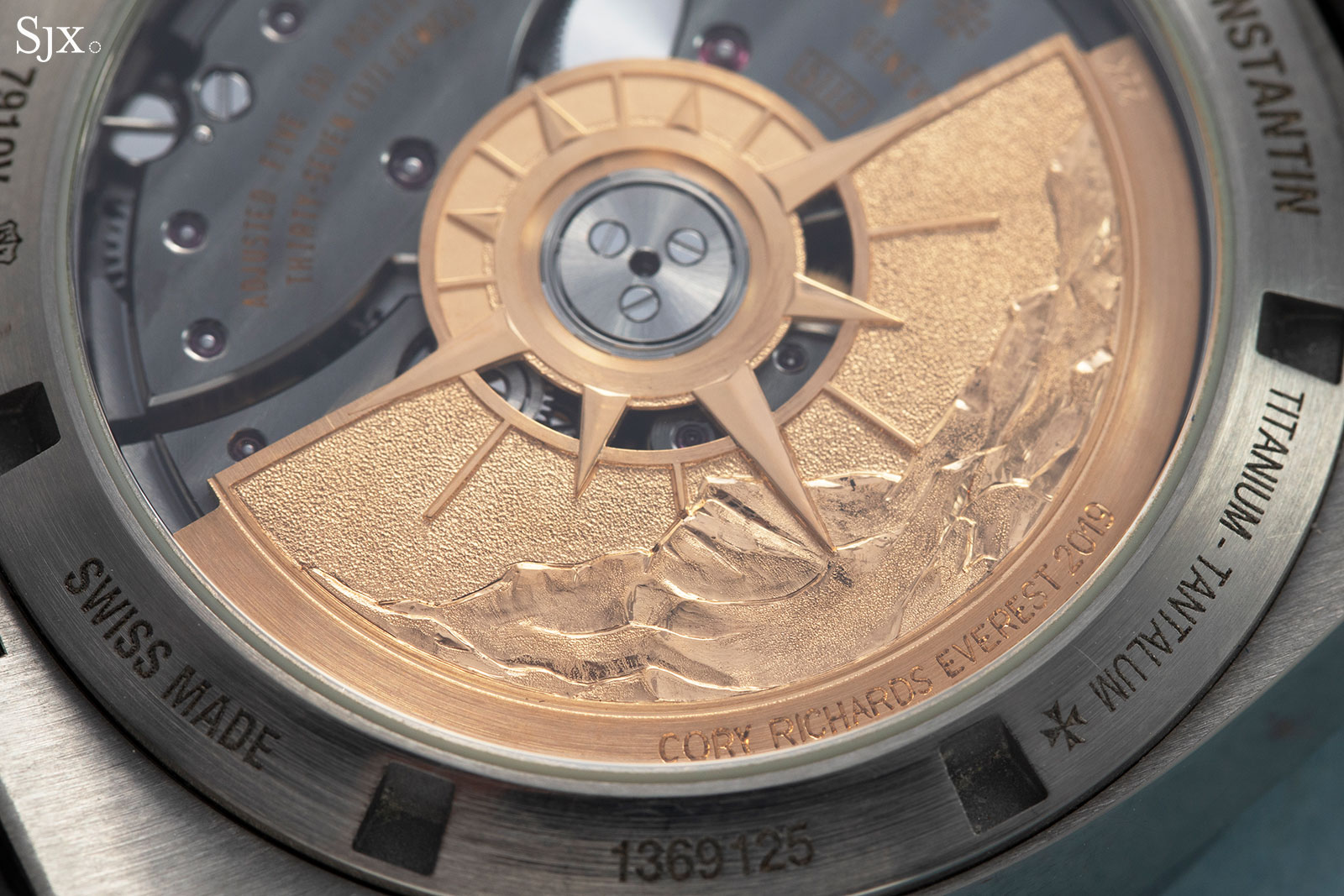 Interestingly, photos of Mr Richards on Everest show him wearing the watch on a metal bracelet that’s presumably titanium, but the prototype is being sold only with two straps, one fabric and the other rubber.

Vacheron Constantin has stated that the Overseas Dual-Time prototype will remain just that, a one-off prototype – for now. Given how well received it has been, it’s hard to imagine the design won’t make it into regular production in one way or another.

Availability: The Overseas prototype is lot 72 in Game Changers, and has an estimate of US$20,000-40,000. It’ll be sold on December 10, 2019 at Phillips in New York, with all proceeds going to the National Geographic Society.