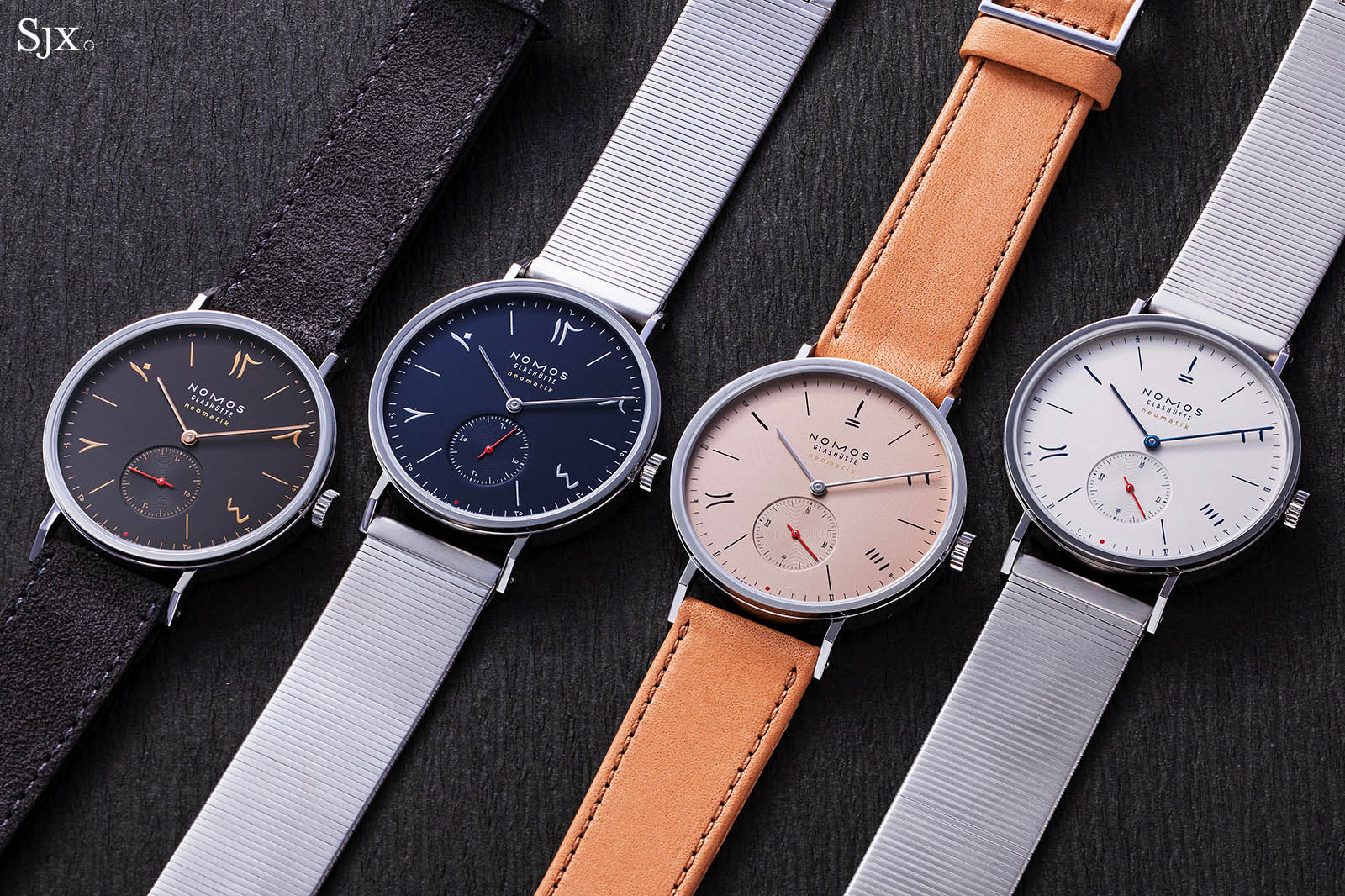 Singapore watch retailer The Hour Glass has just unveiled yet another limited edition to mark the its 40th year – the Nomos Tangente Neomatik 39 Red Dot. It’s the most affordable anniversary edition yet, and also also the third in the annual “Red Dot” series of watches made for Singapore.

Available in four iterations, each limited to just 50 pieces, the limited edition is based on the bestselling Tangente automatic, arguably the quintessential Nomos. It screams, or rather quietly declares, Nomos’ design philosophy of Deutscher Werkbund, the predecessor of Bauhaus, and is characterised by a clean dial with large, alternating hour numerals and a case with thin, angular lugs.

While most limited-edition watches from Nomos vary in colour, with subtle, yet profound tweaks to the palette, the new Red Dot quartet departs from the norm in one drastic way: the first pair features Eastern Arabic numerals, while the second has its hours in Chinese oracle bone script. According to The Hour Glass, the use of both scripts is a nod to Singapore’s history as an entrepot where traders from both the Near East and Far East often stopped.

All four watches also pay tribute to the country with a small in-joke, with a little red dot at six o’clock – a reference to the city state’s frequent depiction on maps.

First conceived in 1992 by Nomos founder Roland Schwertner, the Tangente was designed according to the tenets of Deutscher Werkbund, the early 20th-century design movement that aimed to combine artisanal crafts and mass production, thereby establishing the principles that later inspired Bauhaus.

The Tangente takes its cues from 1930s wristwatches made in Glashütte by a variety of now defunct brands, combining a case and dial design common during that period.

Despite the “39” suffix, the Tangente “The Hour Glass” edition measures 38.5mm wide. It sits a lot larger on the wrist due to its long, angular lugs that extend a good centimetre from the case. And the narrow bezel and wide dial further enhance the perception of size, making this a much larger watch than the measurements indicate.

However, the case is just 7.2mm high, a mere 0.5mm thicker than the hand-wound Tangente 38, giving it an elegant, flat profile.

While Nomos cases are well-designed instantly recognisable, the finishing is straightforward. The case is entirely polished and paired with either a Cordovan leather strap, or a stainless-steel bracelet with a proprietary folding clasp and a quick-release spring bars.

Notably, these are the only Tangente watches offered with a bracelet. Made of up fine lateral links, the bracelet is thin and well-constructed, with a strong vintage feel. It has a moderate level of polishing with light lateral brushing, which draws attention to the polished case.

Paired with either a salmon or silvered dial, the first two watches feature alternating numerals in an ancient Chinese script found on oracle bones, which were used for divination some 3000 years ago during the Shang dynasty.

Thin and elegant, the typeface is aesthetically minimal yet striking.

Impressively, the same script is used for the minuscule five-minute markers as well as the quarters on the small-seconds sub-dial; these markings are extremely fine and only apparent upon close scrutiny.

The second pair of watches incorporate the more widely known and sought-after Eastern Arabic numerals, usually found in watches dedicated to the Middle East. Somewhat fashionable in recent years, such numerals have been found on watches ranging from Rolex to IWC.

Because of the script is elegantly curved, its visual informality lends zest to the otherwise the sterile nature of German design.

The first watch features a ruthenium-coloured dial with beige indices and numerals, paired with rose-gold plated hands while the second iteration has a navy-blue dial with light blue numerals and rhodium-plated hands.

In all four watches, the seconds hand in the sub-dial is in a bright red, echoing the red dot jus below, offering excellent contrast from the hour and minute hands.

The greatest aspect of these watches that make them excellent value propositions, in addition to the unique dials, is the ultra-thin, in-house Neomatik DUW 3001 movement. Rarely a feature at this price point, the movement boasts an in-house escapement, balance wheel and hairspring, known collectively as the “Swing System”.

And at a mere 3.2mm in height, the movement is also among the slimmest full-rotor automatic movements on the market, while managing a respectable power reserve of 43 hours. 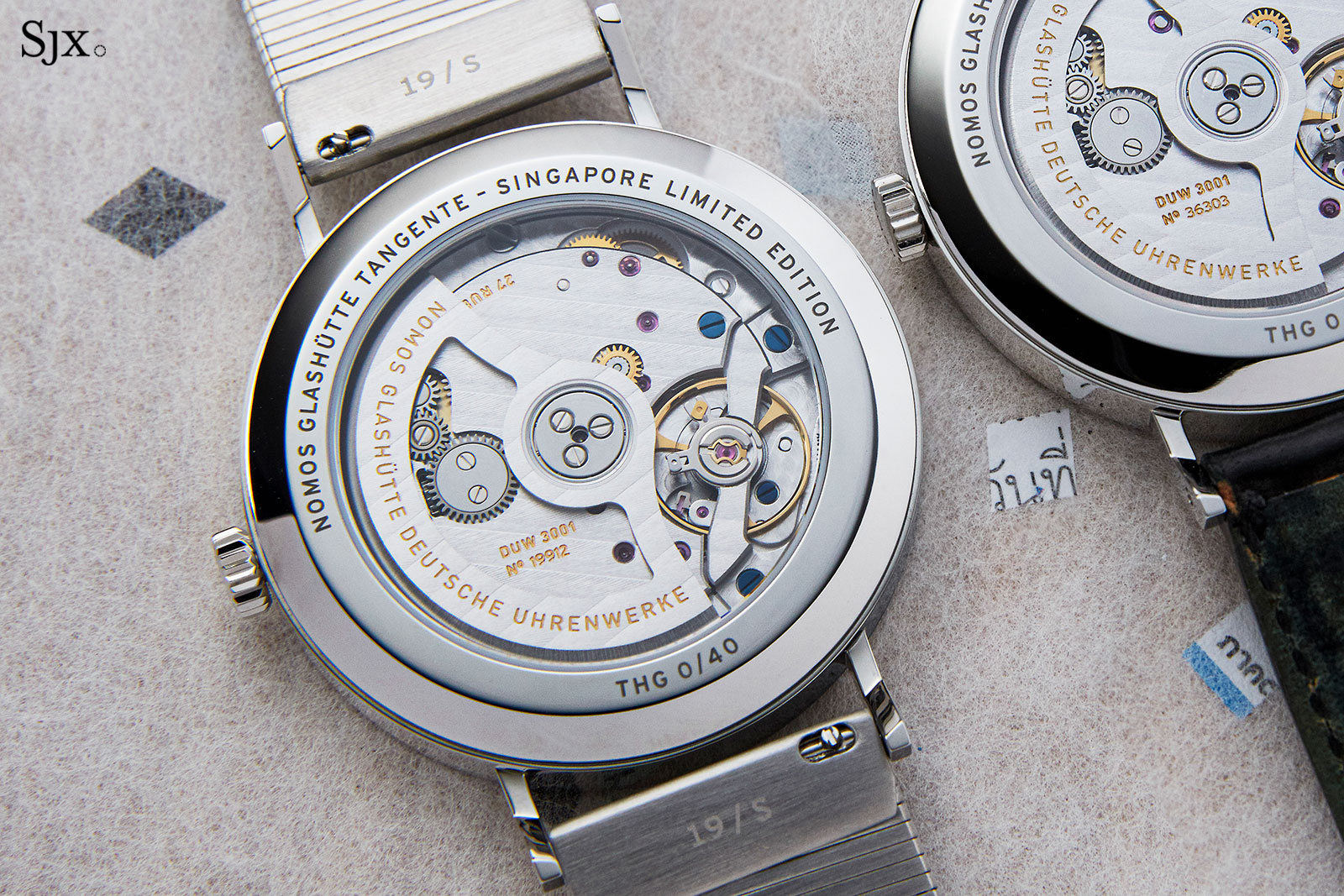 That was achieved in a couple of ways: reworking the gear train, a thinner mainspring, a twin pawl winding wheel, and a lower-than-average balance frequency of 3Hz. It also has a brake system that stops the rotor when the mainspring is fully wound

Apart from having a full-rotor, it features a traditional three-quarter plate that accommodates the arbors of the wheel train, keeping all of the gears in stable contact, as well as a balance bridge that secures the balance wheel on both ends, ensuring greater durability and stability, as well as easier assembly.

Overall, the movement is constructed in a robust and practical manner. But attention has also been paid to its aesthetics. The movement is also attractively finished, albeit by machine, with Glashütte ribbing, perlage and blued steel screws, giving it an appealing look that punches above its price class.

Of the four variants, the duo with the Eastern Arabic numerals works best – the model with a black dial and rose-gold numerals is the most striking – with the sleek and simple form of the numbers pairing well with the dial and case design. In comparison, the oracle bone script numbers feel angular and squared off.

The Tangente Neomatik Red Dot “The Hour Glass” costs slightly less than the standard Tangente Neomatik 39, making it exceedingly compelling in the context of value. It is extremely limited production is a big plus, as well as the surprising manner in which it deviates from the standard model, while maintaining the brand’s key traits of functionality and simplicity.

The Tangente Neomatik Red Dot “The Hour Glass” is limited to 50 pieces each, priced at 4,850 Singapore dollars, equivalent to US$3520. It’s available only at The Hour Glass.