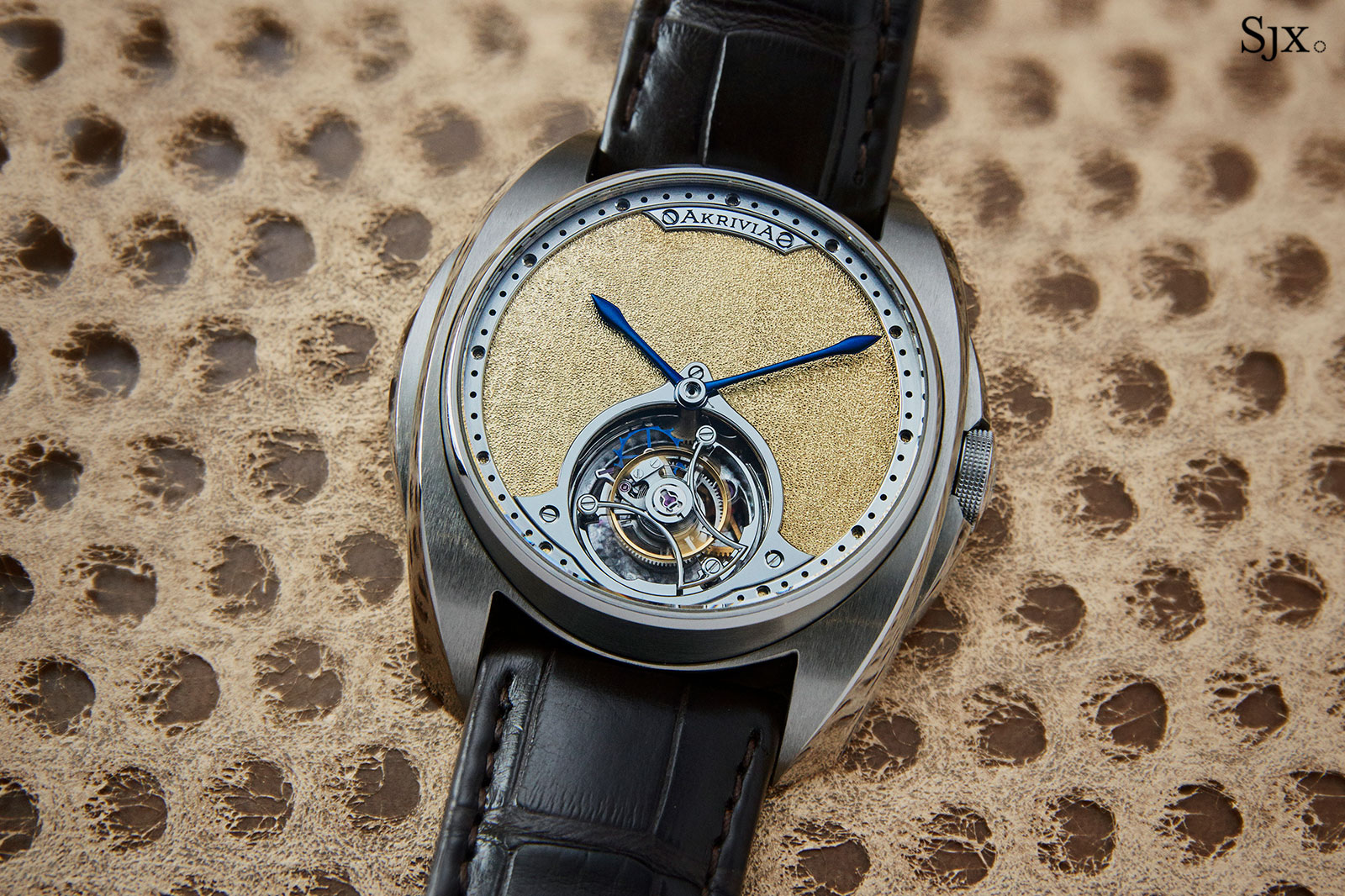 Last year’s Akrivia Chronomètre Contemporain made its young creator, Rexhep Rexhepi, a star, but the brand’s foundational watch is actually the “AK” series. Chunky and slightly sporty, the AK watches are a world away from the classical styling of the Chronomètre Contemporain, but boast the same level of movement finishing, along with a bonus of elaborately hand-hammered dials.

The second model in the AK series was the AK-02 Tourbillon Heure Minute, or “Hour Minute” – a time-only watch with a tourbillon regulator. The AK-02 is probably the finest finished tourbillon wristwatch in its price segment, and in the price segments above it as well. 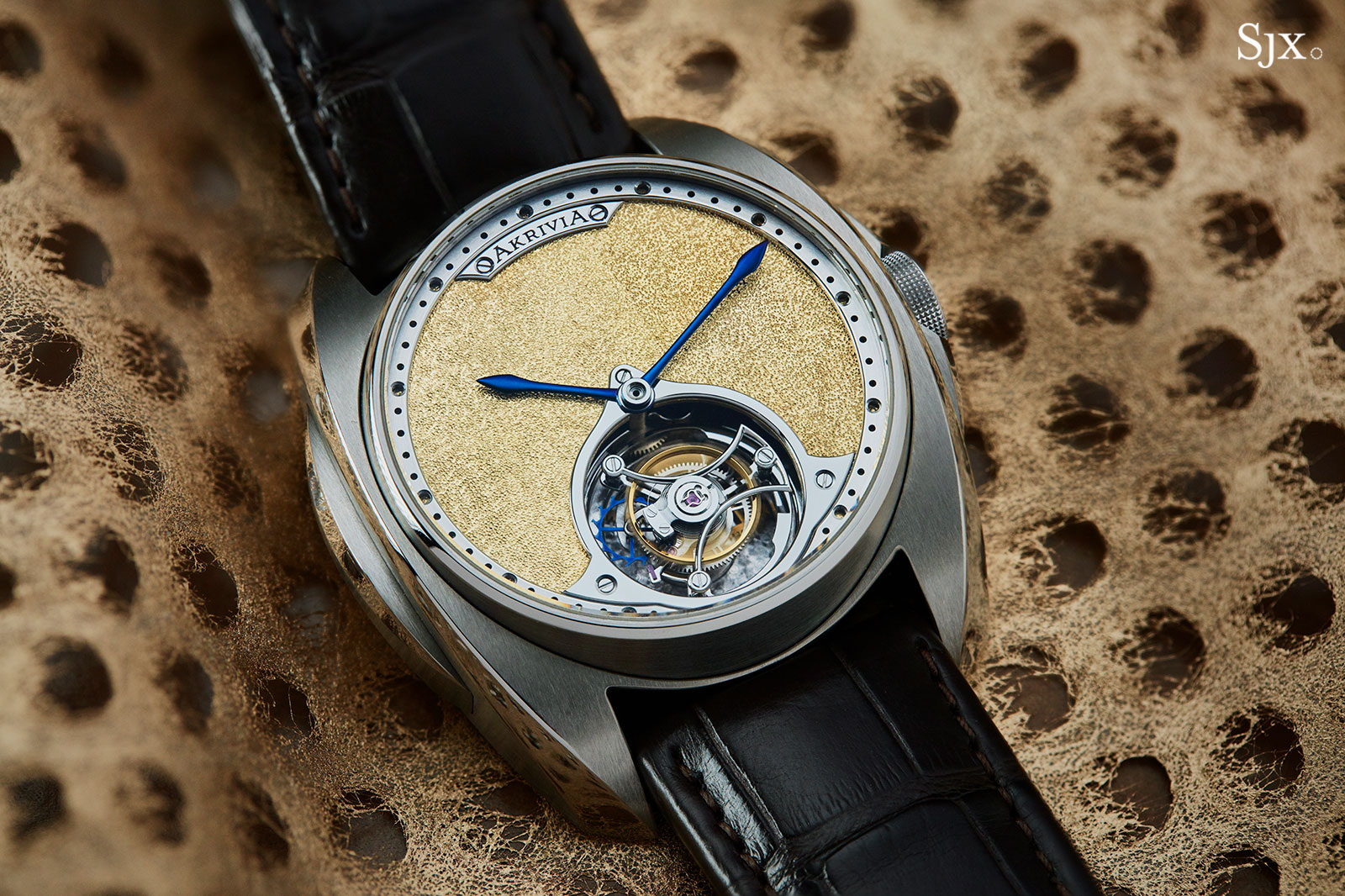 It’s a fairly large watch, with the case measuring 43.0mm with and 12.9mm high. But the lugs are short so it feels fairly compact on the wrist. And because the AK-02 is typically found in a steel case, as is pictured here, or occasionally titanium, it is usually lightweight. Gold cases are available for a modest premium, though rarely requested. 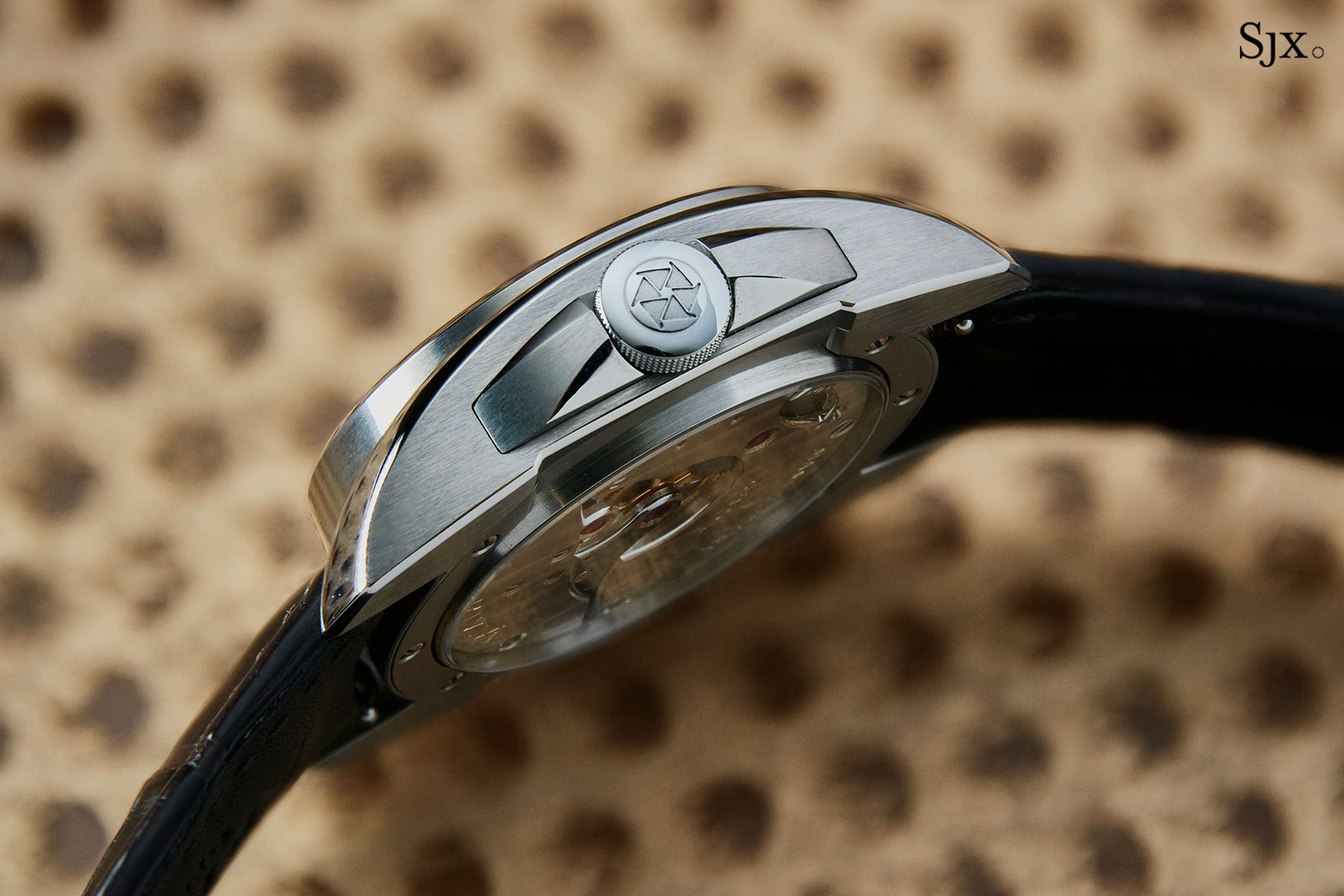 The case feels like it’s trying too hard, and consequently feels overly built, with thick lugs and a high case band. It’s too chunky for my taste, and doesn’t quite suit the refined movement inside.

That being said, the AK-style case has it fans for several reason. The design is distinctive, more distinctive than the old school Chronomètre Contemporain case.

And it is also finished to a high degree, with contrasting polished and brushed surfaces; the wide, polished bevel along its length is sharply executed. In fact, even the underside of the case has polished, bevelled edges, illustrating the brand’s attention to detail. 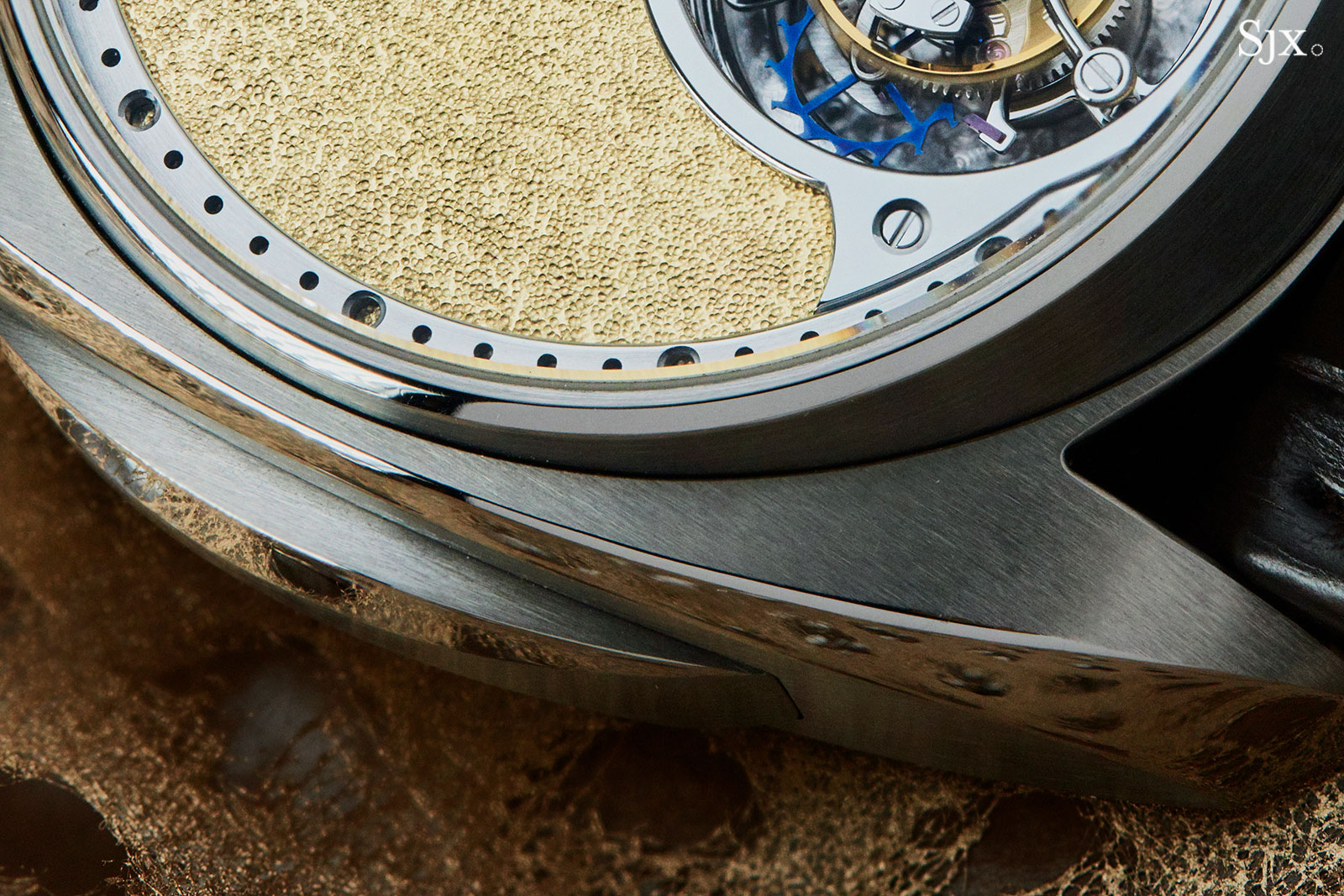 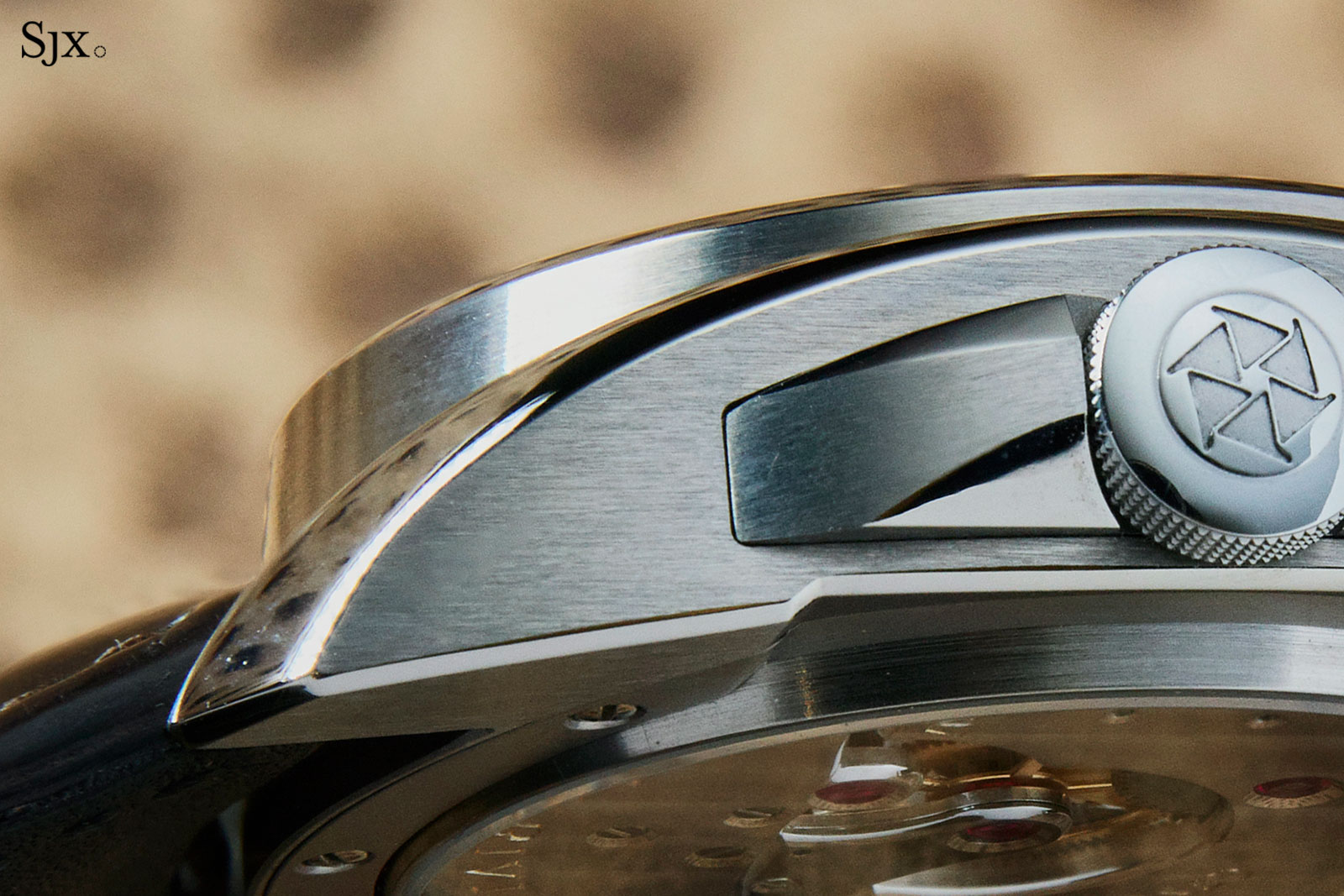 Note the bevelled edge on the back

Mr Rexhepi has refined the AK case over time, with the latest AK-06 having a thinner and sleeker version of the same case. And he has also indicated that the design will be further fine-tuned in the future.

Most AK watches have solid gold dials, though a few are in steel. This particular example has a solid yellow gold dial that’s finished with a favourite technique at Akrivia: hand-hammering to create a dimpled surface.

A process that requires patience and a deft hand, hand-hammering the dial gives it a granular finish that catches the light in a subtle manner.

Aside from the recent, one-off Chronomètre Contemporain “Only Watch” has a hand-hammered enamel dial, the finish is exclusive to the AK series, which is a big point of attraction for the model. 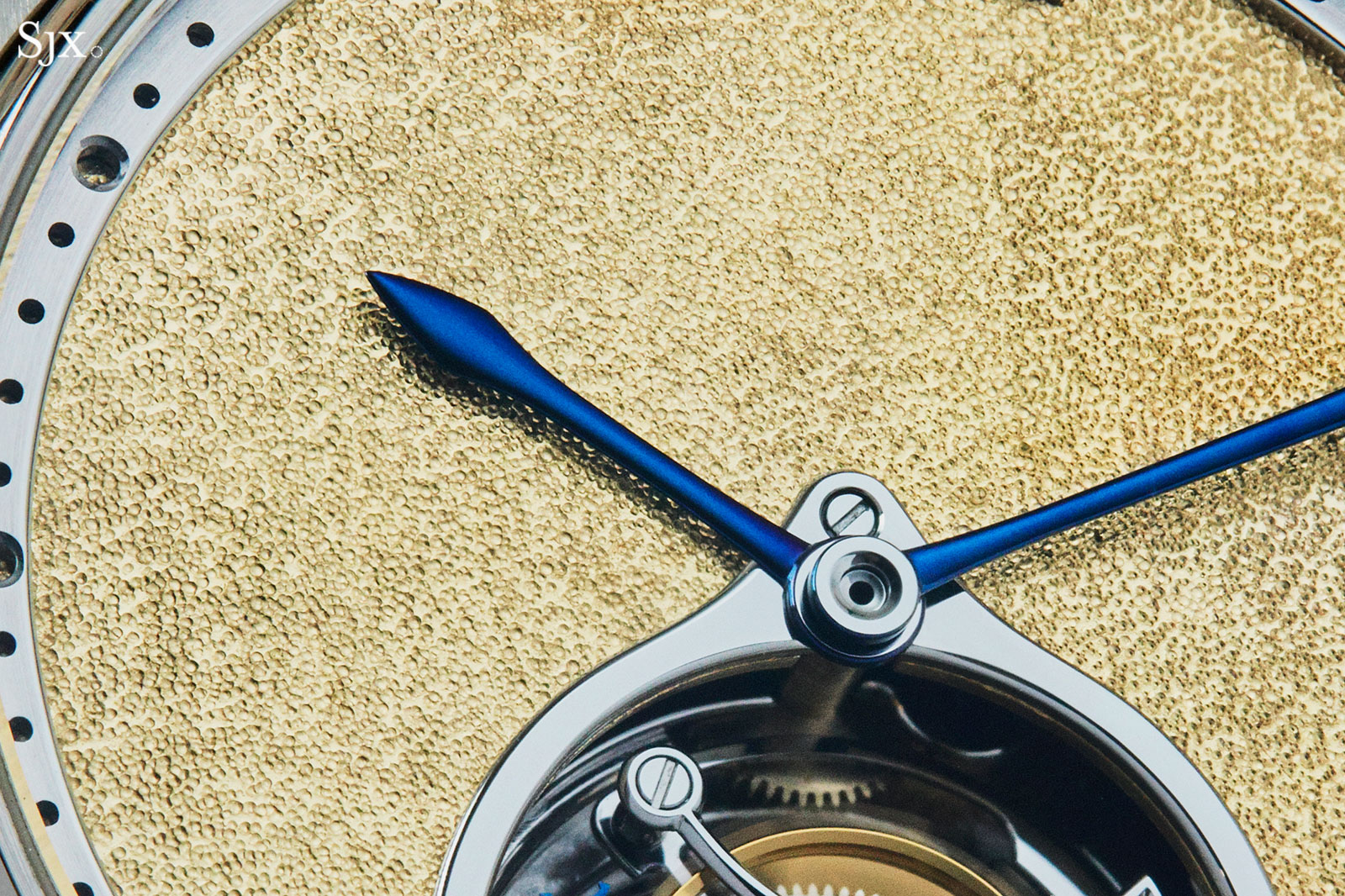 Like the dial, the hands are hand-made, first filed by hand to give them a rounded profile, then polished and blued.

Here the hands are spear-spared and similar to those on the Chronomètre Contemporain – the brand’s best design – though for those who want something different Akrivia also offers an oddly shaped set of hands that look like grapes with very long stems.

But the best part of all is the movement. On the front the flying tourbillon is visible at six, sitting inside a black polished steel frame.

The finishing is excellent. The steel carriage is finished by hand, with prominent bevelling on its arms, and also the screw heads. 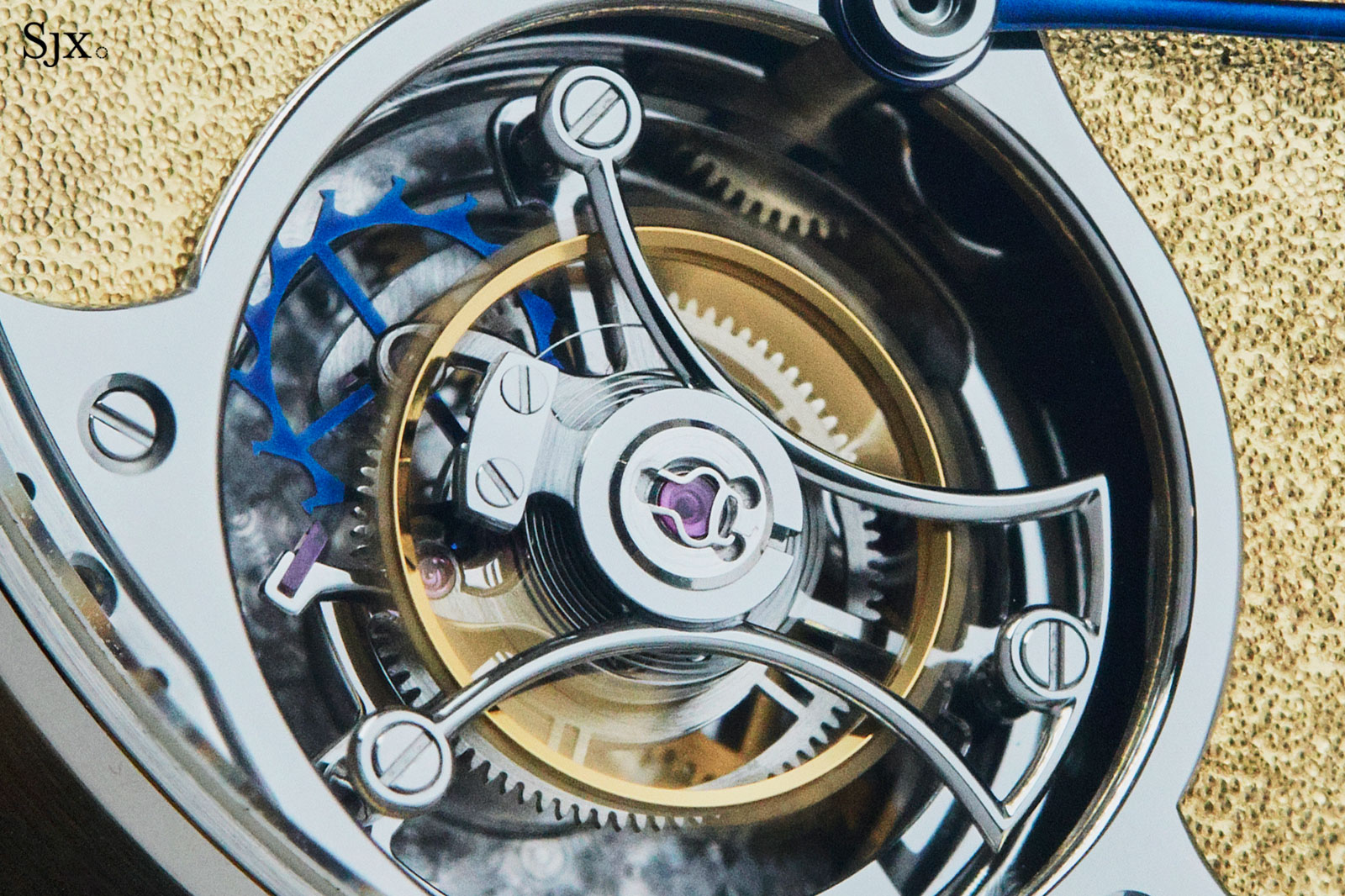 The escape wheel is heat blued, and not silicon; Akrivia only works with traditional materials

On the back the finishing is done to the same high standard. To start with, all of the text on the bridges is engraved by hand, giving the letters the serif font that’s typical of hand engraving. The engraving is, however, slightly uneven in size and alignment, which will no doubt be improved in future examples. 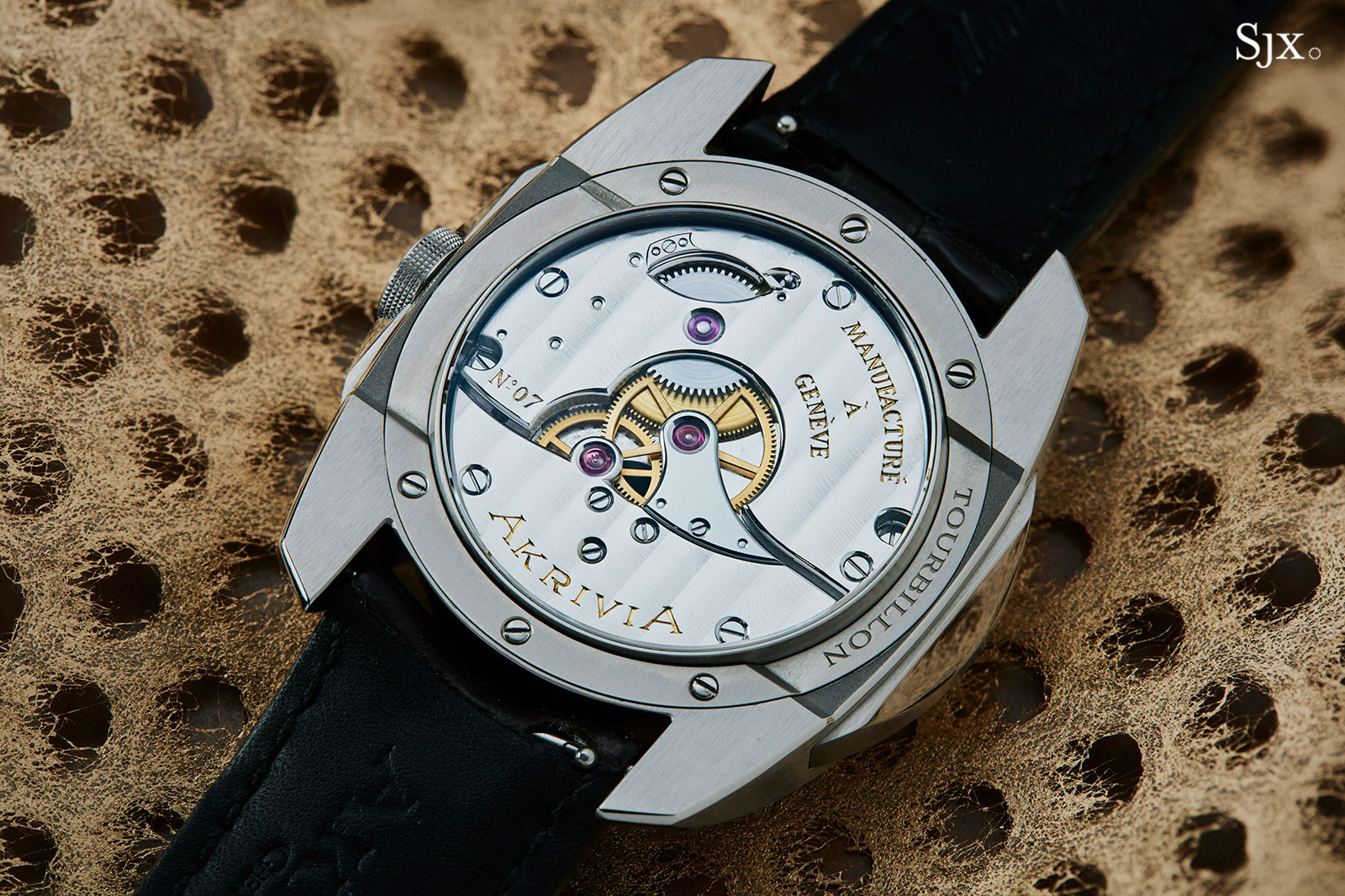 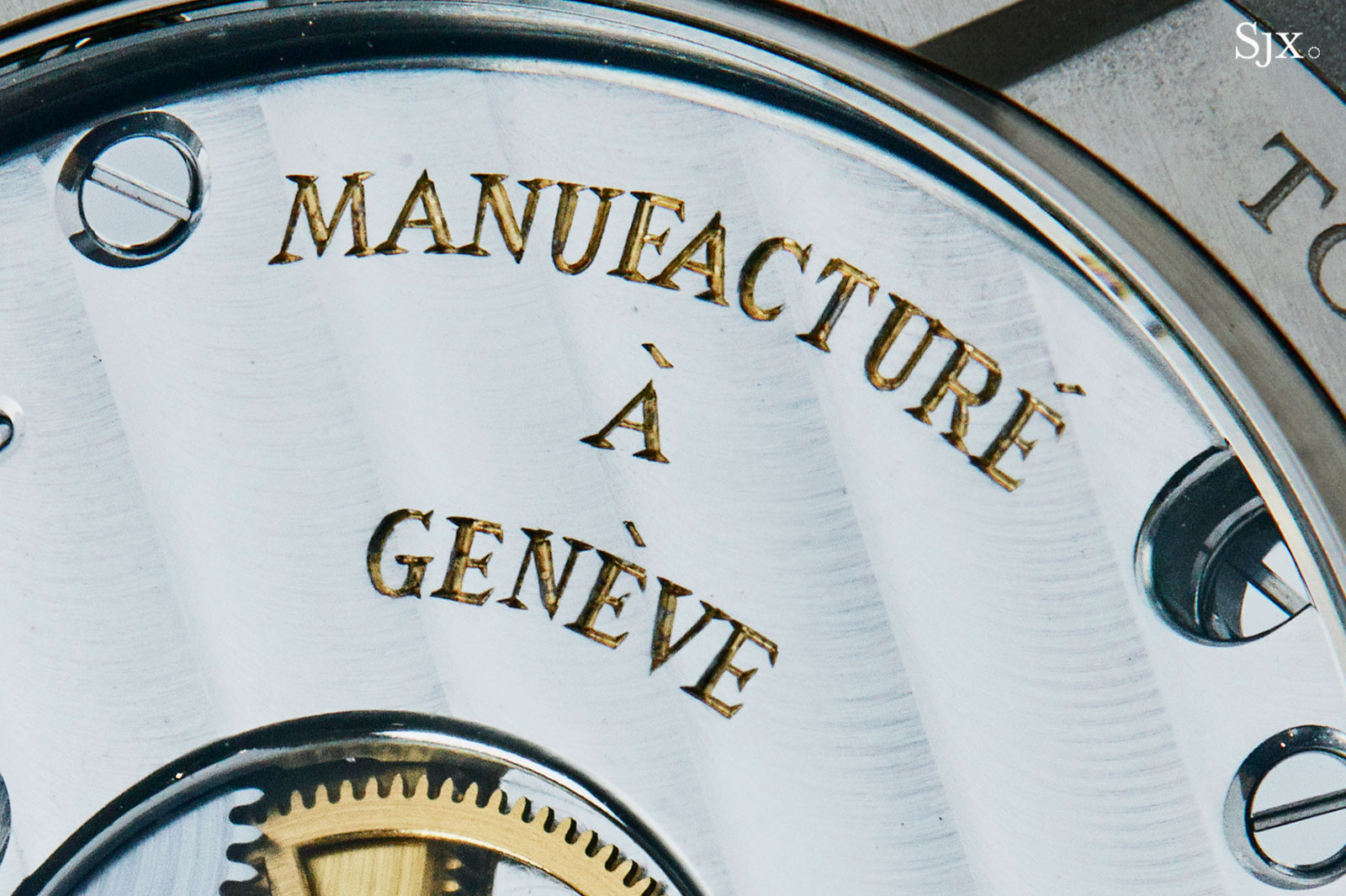 Every component is properly finished, from the polished bevels on the bridges to the countersinks for jewels to the graining and chamfering of the wheels. And Akrivia also adds decorative flourishes that its founder is fond of, like the separate, black polished bridge for the centre wheel. 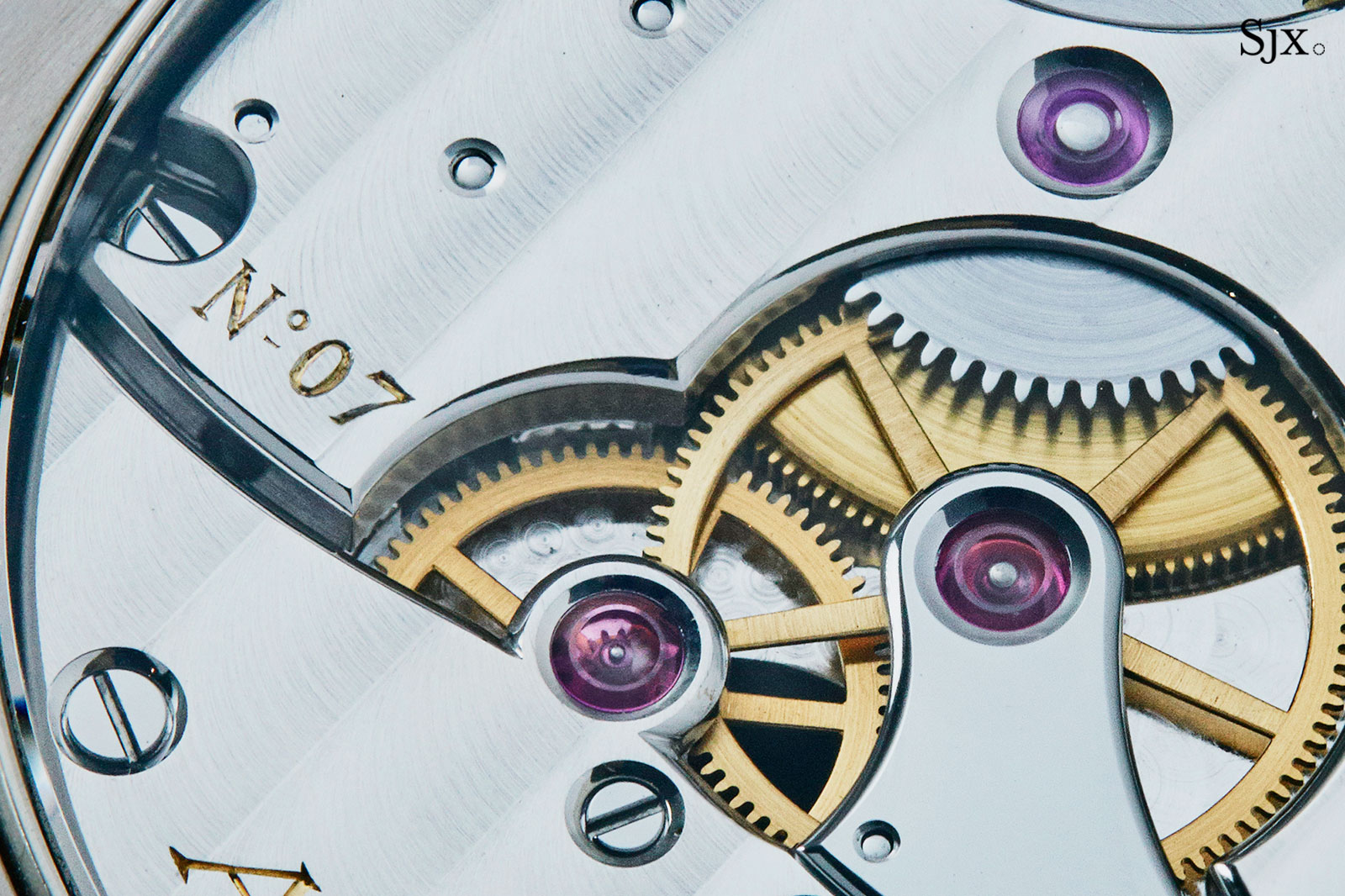 Even the smallest details, like the steel click spring for the winding ratchet wheel, are executed without compromise. 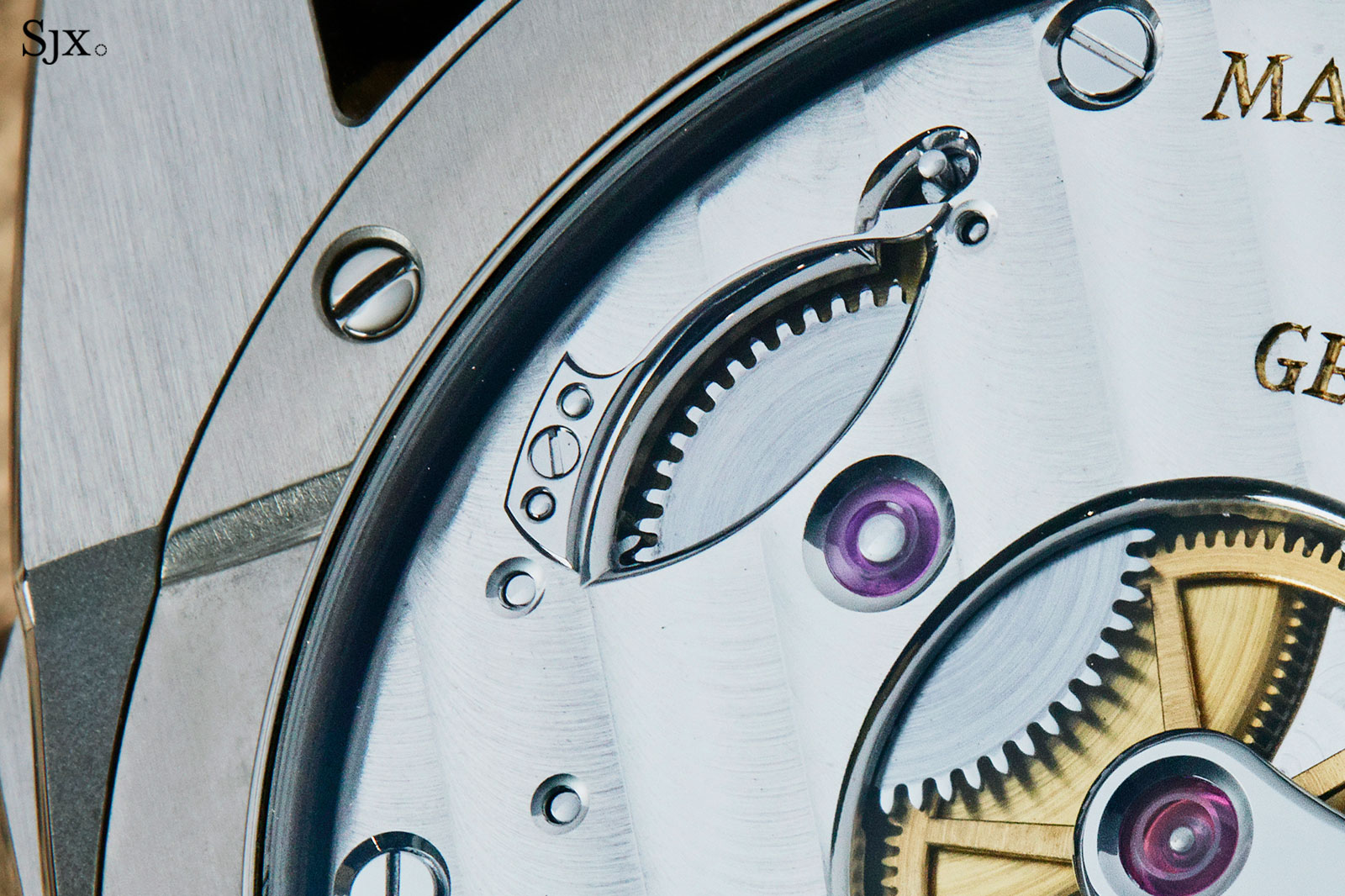 But like all of Akrivia’s earliest movements, the calibre is not in-house. Instead, Akrivia relies on an ébauche, or movement blank, supplied by MHC Manufacture Hautes Complications, a specialist that builds complicated calibres for a slew of brands. Various customisations are done to the movement made for Akrivia, in order to achieve its classical styling and finishing.

The construction of the movement actually originated with BNB Concept, a now defunct movement maker where MHC founder, Pierre-Laurent Favre, once worked. Akrivia founder Rexhep Rexhepi was once Mr Favre’s colleague at BNB Concept, explaining how the relationship came about.

Though MHC tourbillon movements are found in watches from other brands, the AK-02 is by far – and the distance is huge – the best finished amongst them. In the future, however, Akrivia founder Mr Rexhepi has stated he will develop his own movements for all the brand’s watches. 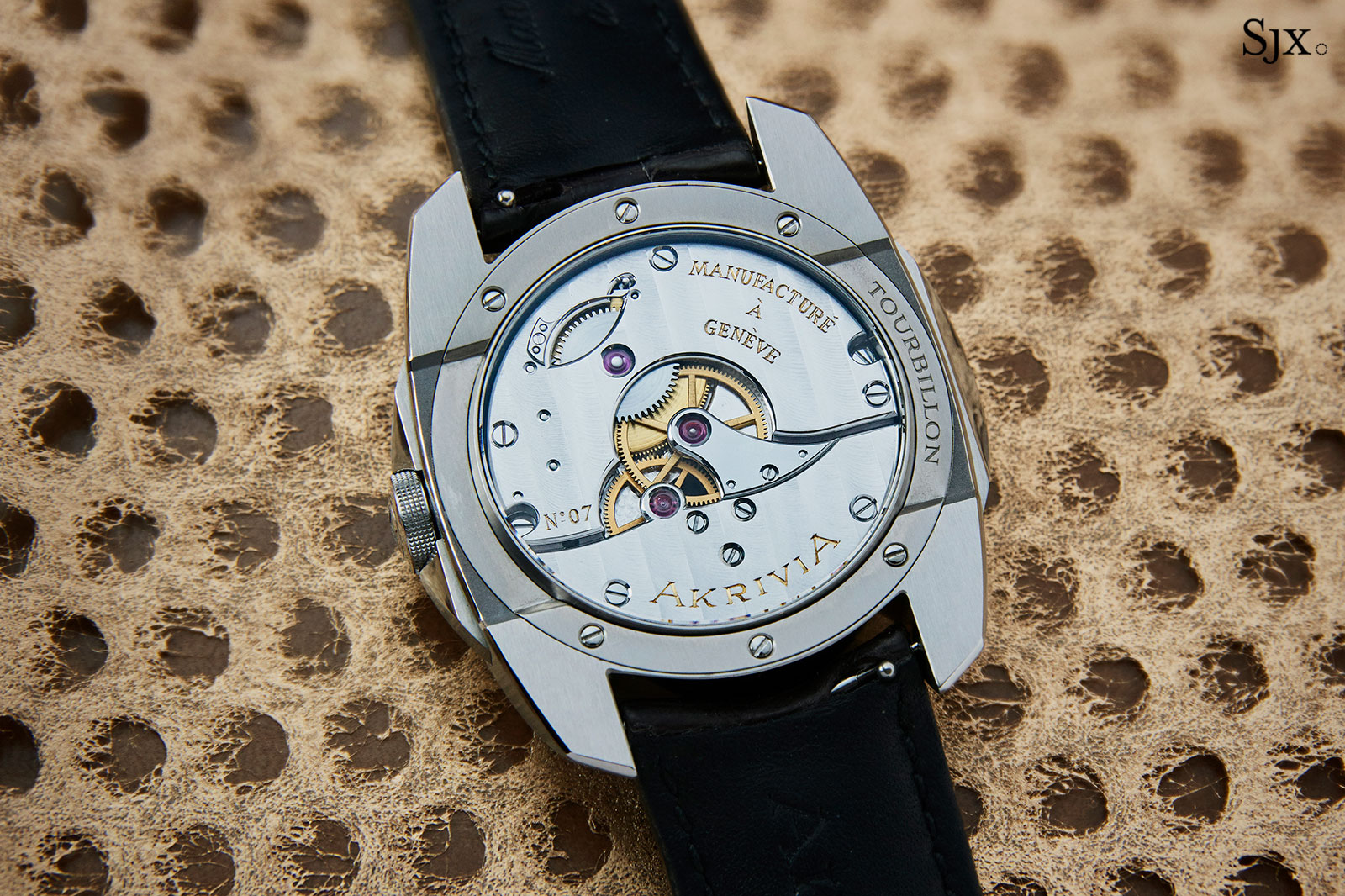 The AK-02 is a remarkably finely finished, especially for what it costs, which is just over US$120,000. It’s a large sum of money, but there are no other tourbillons of comparable quality for the price on the market today.

While the finishing is unquestionable, the case is an acquired taste. It probably appeals best to someone who wants Akrivia’s quality of finishing, but finds the Chronometre Contemporain boring and old fashioned.