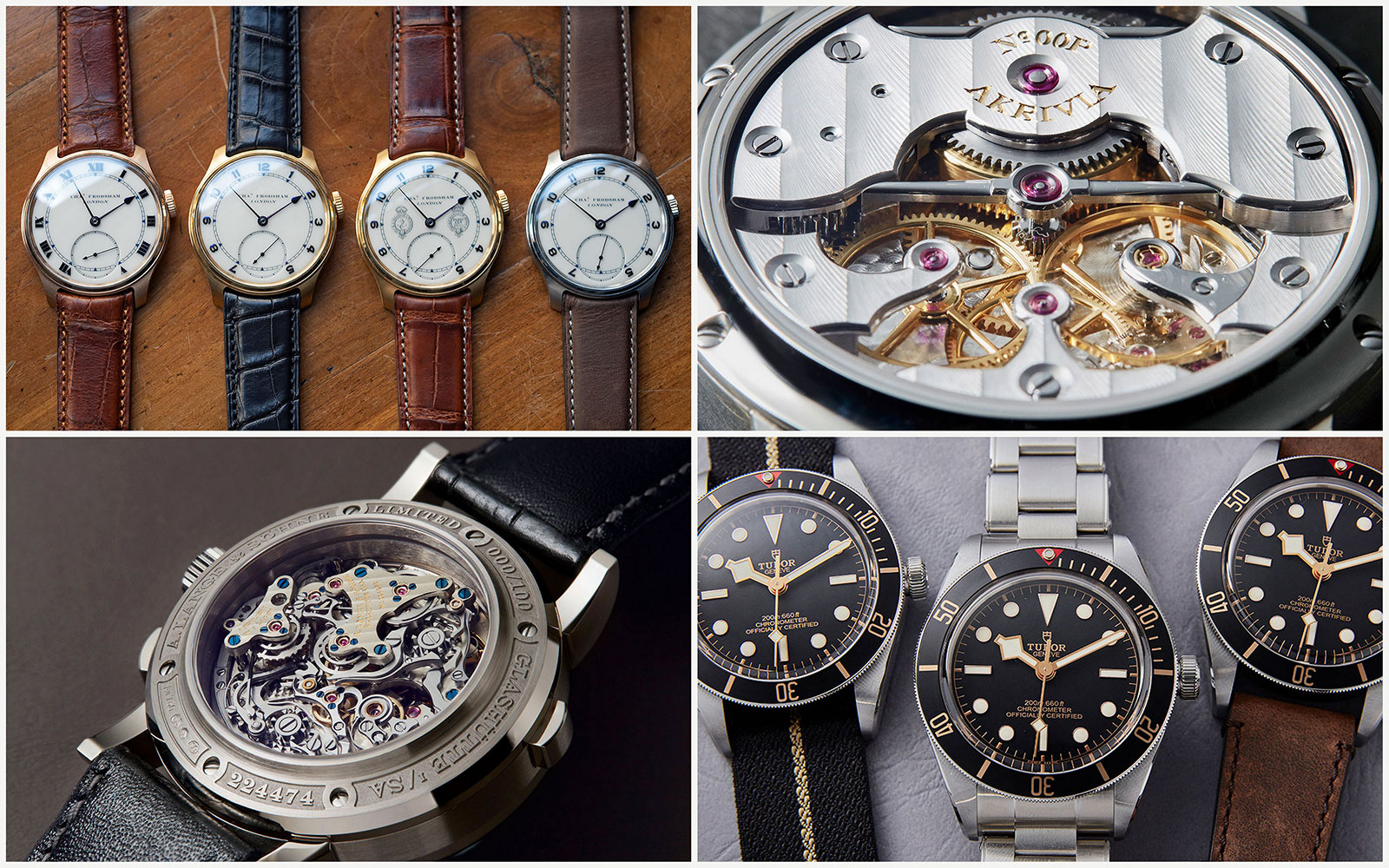 Twenty-eighteen was not the best of years, but it was not the worst of years. Some watchmakers managed to outdo themselves, and everyone else.

These are my picks for the year’s best, judged by a simple criteria: I have to like, respect or admire the watch more than most others unveiled during the year. Consequently, it’s varied list, ranging from the impressive but slightly unwieldy Triple Split, to the uber-nerd Charles Frodsham chronometer, to the all-gold and all cool G-Shock Full Metal.

The Triple Split isn’t a pretty watch, neither is it an imaginative watch, but it’s damn impressive, extreme German engineering. It edges out the Datograph Lumen, which is cool but not as notable technically.

A Double Split on steroids, the Triple Split can measure two simultaneous elapsed times of up to 12 hours, a feat that required 20% more movement parts than the Double Split, but in a watch that’s just 0.3mm thicker. The engineering, in short, is awesome. And the awesomeness is confirmed by the view of the movement from the back. The Triple Split costs €139,000, a bit more than the Double Split but worth the stretch. Those lucky enough to land one will have to wait. Though delivery was slated for September, the first Triple Split ever only arrived in November. You can find out more about it here.

It’s also worth mentioning the 1815 ‘Homage to Walter Lange’, which while not as technically compelling, has a great deal of emotional appeal as being the watch made in the memory of the late Walter Lange.

It was generally a pretty ordinary year for independent watchmaking, which makes the highlights stand out all the more. Widely regarded as one of the year’s best, the Chronometre Contemporain is good old fashioned watchmaking with a twist.

Though the movement decoration is par excellence, it has an imaginative, symmetrical layout as well as a eminently practical zero-reset hack seconds. Likewise for the enamel dial, which is traditional with a hint of Art Deco, but still contemporary. And it helps that it’s the creation of Rexhep Rexhepi, a modest, hardworking but talented watchmaker who might just be the next big thing. Being only in his early thirties Mr Rexhepi has a long road ahead of him, one that is full of promise but also pitfalls, as contemporary independent watchmaking has shown time and time again.

The origins and details of the watch are illustrated here, and the major improvements Mr Rexhepi has done to the watch are examined here.

While the Tank Cintree was my personal favourite (and a watch I was fortunate enough to buy), the greatest Cartier wristwatch of the year is undoubtedly the Revelation D’une Panthere. It’s a lady’s wristwatch with an ever changing face that is filled with a multitude of tiny gold spheres that trickle into forming an ephemeral panther’s head, depending on the motion of the wrist.

The technology behind the panther’s head is a secret but not hard to guess at. The spheres are probably suspended in a liquid with a density that is almost identical to the transparent mould that forms the outline of the panther’s head, making it seem seamless and invisible.

The only downside is the size of the watch, at 37mm in diameter and slightly thick it feels a bit chunky for what should be an elegant feminine wristwatch. Retailing for just over US$100,000, the Revelation D’une Panthere is stiffly priced but completely unique.

The magnitude of no holds bar watch nerd-ness in the Double Impulse Chronometer Wristwatch is off the charts. There is so much technical accomplishment inside – double impulse chronometer escapement with double barrels and going trains – that the watch could just stand on its own. But it is also full of history, being built on the work of Abraham-Louis Breguet, George Daniels and Derek Pratt.

And there is everything else about it, including the optional, forged and hard-rolled 22k gold case, and ceramic dial. It really is solid English engineering of the sort that mostly disappeared along with the British Empire. Starting at just under US$100,000 for the steel version, the Double Impulse Chronometer Wristwatch is richly priced but worth it for the connoisseur who comprehends it, which is why Frodsham has a two (and going on three) year waiting list now. The watch is explained in great detail here.

It’s also extremely light on the wrist (in the titanium case), with an lug-less case and integrated bracelet that gives it great ergonomics. But the watch is not to everyone’s taste. Even I am still warming up to it. But for SFr58,000 in a titanium case, the LineSport split-seconds is an uncommonly great buy. (A more detailed article on the watch is on its way.)

One of my absolute favourite buys of the year, the entirely gold-plated G-Shock “Full Metal” is affordable, surprisingly well made, and cool. It’s a deservingly flamboyant remake of a timepiece that is genuine icon of watchmaking. While this exact version was a launch event limited edition, Casio has subsequently unveiled a similar, all-gold model that, the ref. GMWB5000GD-9, that is part of the regular collection.

The Pallweber wristwatch is the smartest IWC to emerge in a long time, but it didn’t quite get as much attention as it should have, perhaps because such engineering isn’t really what the average IWC buyer wants now. That is a shame because the Pallweber boasts an ingeniously streamlined, and consequently affordable, double-digital time display, a feat only ever accomplished by watches that cost a lot more, like the Lange Zeitwerk. While it is slightly large, the Pallweber wristwatch isn’t outrageously large by modern standards. And more importantly the size is justified by the movement, which was developed from the ground up. We explained it in extreme detail in April.

The Black Bay GMT probably wins the award for the best value proposition in 2018, but it is a large watch, just big enough to feel it should be smaller. The Black Bay Fifty-Eight, on the other hand, is ideally sized at 39mm and eminently wearable. It’s just right in size and proportions. That is why, though I had the choice of a Fifty-Eight or GMT, I picked the former. And like all Tudor watches it is remarkable value for money, though admittedly not quite as remarkable as the Black Bay GMT. Most notably it’s powered by a newly developed, significantly smaller in-house calibre that still boasts all the specs of Tudor’s larger movements, including a 70-hour power reserve and free-sprung balance.

So now all one can hope for is a Black Bay GMT in a 39mm case.