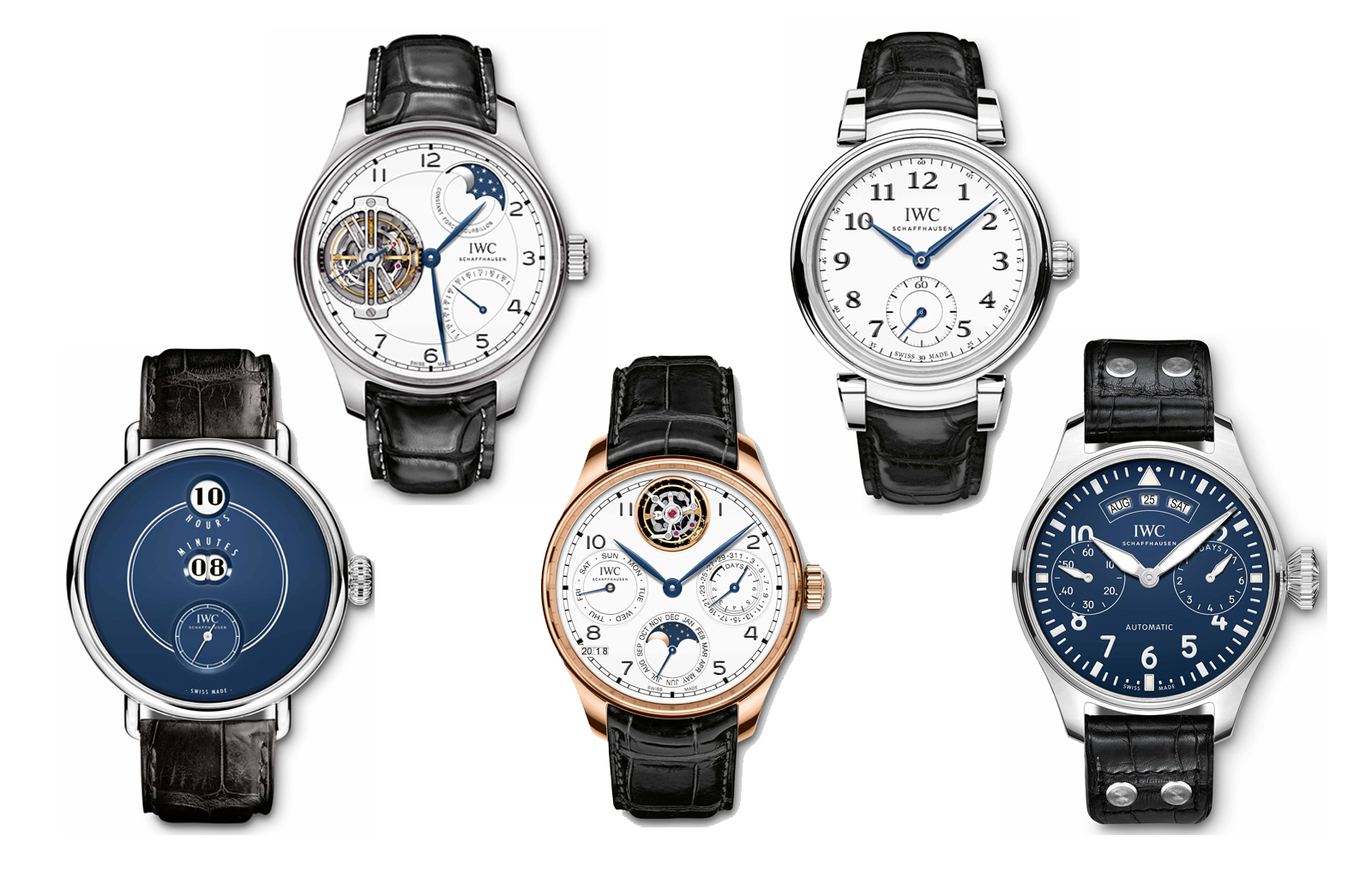 To celebrate the 150 years since its founding in 1868, IWC has put together the 150th Anniversary Jubilee Collection: 27 watches encompassing all of the brand’s bestselling model lines. The collection spans a diversity of watches, with the base models starting at US$5000, but also includes the digital Pallweber pocket watch.

Varied as they are, all the Jubilee watches share several key traits. The dials are either white or blue lacquer that’s smooth and glossy, meant to resemble fired enamel. For that reason, the anniversary watches also have printed, rather than applied, hour markers. And all Jubilee watches have case backs or movements bearing the anniversary insignia.

The most unusual is undoubtedly the Tribute to Pallweber Edition “150 Years” (Ref. IW505101), a pocket watch modelled on the late 19th century original made by Austrian watchmaker Josef Pallweber.

While IWC produced pocket watches until recently, discontinuing them only about a decade ago, they were absent in its catalogue, until now. Very much like the original, the modern day Pallweber tells the time via jumping hours and minutes, plus a running small seconds at six o’clock.

It has a 52mm red gold case with an engine-turned hinged cover and a white lacquer dial. Inside is the cal. 94200, which has a separate barrel and wheel train for the minute discs, giving it 60 hours of power reserve. The price has yet to be revealed.

Just as different as the pocket watch but much more practical, the Tribute to Pallweber Edition “150 Years” was unveiled in red gold just before SIHH 2018 to a notably warm response, especially from aficionados. Two more versions have just been announced: platinum with a white lacquer dial (ref. IW505001) as well as stainless steel with a blue lacquer dial (ref. IW505003).

They measure 45mm in diameter and are powered by the same cal. 94200. Limited to 500 in steel, 250 in red gold and just 25 in platinum, the Pallweber wristwatch takes after the original IWC digital display pocket watch, offering the most novel movement and time display from IWC in a very long time.

The flagship model of the Jubilee Collection, the Portugieser Constant-Force Tourbillon Edition “150 Years” features a constant force mechanism integrated into the regulator, as well as a silicon pallet fork and escape wheel.

Available only in red gold with a white lacquer dial, the Portugieser Perpetual Calendar Tourbillon Edition “150 Years” (ref. IW504501) is powered by the newly developed cal. 51950. It’s essentially the first generation seven-day cal. 5000 with the addition of a compact flying tourbillon that’s visible at 12 o’clock.

For those unable to stomach a tourbillon, the Portugieser Perpetual Calendar Edition “150 Years” (ref. IW503405) has everything but the tourbillon. Also only available in red gold with a white lacquer dial and blued hands, it is powered by the cal. 52615, a variant of IWC’s second generation seven-day movement.

Likely to the be one of the most popular watches in the range since it is essentially an upgrade of a perennial favourite, the Portugieser Chronograph Edition “150 Years” looks just like the current model powered by a Valjoux (or sometimes Sellita) movement. But the Jubilee model is instead equipped with the in-house cal. 69355, the first time the Portugieser Chronograph has gone upmarket.

Forty three millimetres in diameter like the first Portuguese models of the 1930s, the Jubilee model is still distinctly contemporary given the date window and modern IWC logo. It is powered by the hand-wound cal. 59215, which has an 8-day power reserve that’s indicated on the back.

The case is 45mm and contains the hand-wound cal. 59800 that has an eight-day power reserve.

Another crowd favourite will be the Portofino Chronograph Edition “150 Years”, which is the entry-level chronograph in the Jubilee Collection. Positioned as the entry-level men’s Jubilee watch, the Portofino Automatic Edition “150 Years” is 40mm in diameter, showing the time and date. Similarly it is powered by either an ETA or Sellita movement, explaining the price: SFr4700.

As with stock models, it displays the calendar in the American format of month, date and day, and is powered by a seven-day cal. 52850. It’s limited to 100 pieces, priced at SFr20,200.

Unusually the Big Pilot’s Watch Big Date Edition “150 Years” features an entirely new movement, being the first pilot’s watch to feature a big date. A big date display was added to the seven-day cal. 59210 and the power reserve was relegated  to the back of the watch so as to maintain the characteristically clean and functional pilot’s dial.

The entry-level aviator’s watch is the Pilot’s Watch Chronograph Edition “150 Years” (ref. IW377725). The dial is white lacquer, matched with blued hands and an entirely polished case, a combination the gives it a flashier look than the average pilot’s timepiece.

The Da Vinci Automatic Edition “150 Years” is 40mm and features a brand new calibre, the 82200 that was conceived to be the affordable (and smaller) option for IWC’s in-house movement. Nevertheless it features a Pellaton winding system with ceramic pawls and wheels, as well as a 60-hour power reserve.

Measuring 36mm in diameter, the Da Vinci Automatic Moon Phase 36 Edition “150 Years” is swathed in 206 brilliant-cut diamonds on the bezel and lugs.