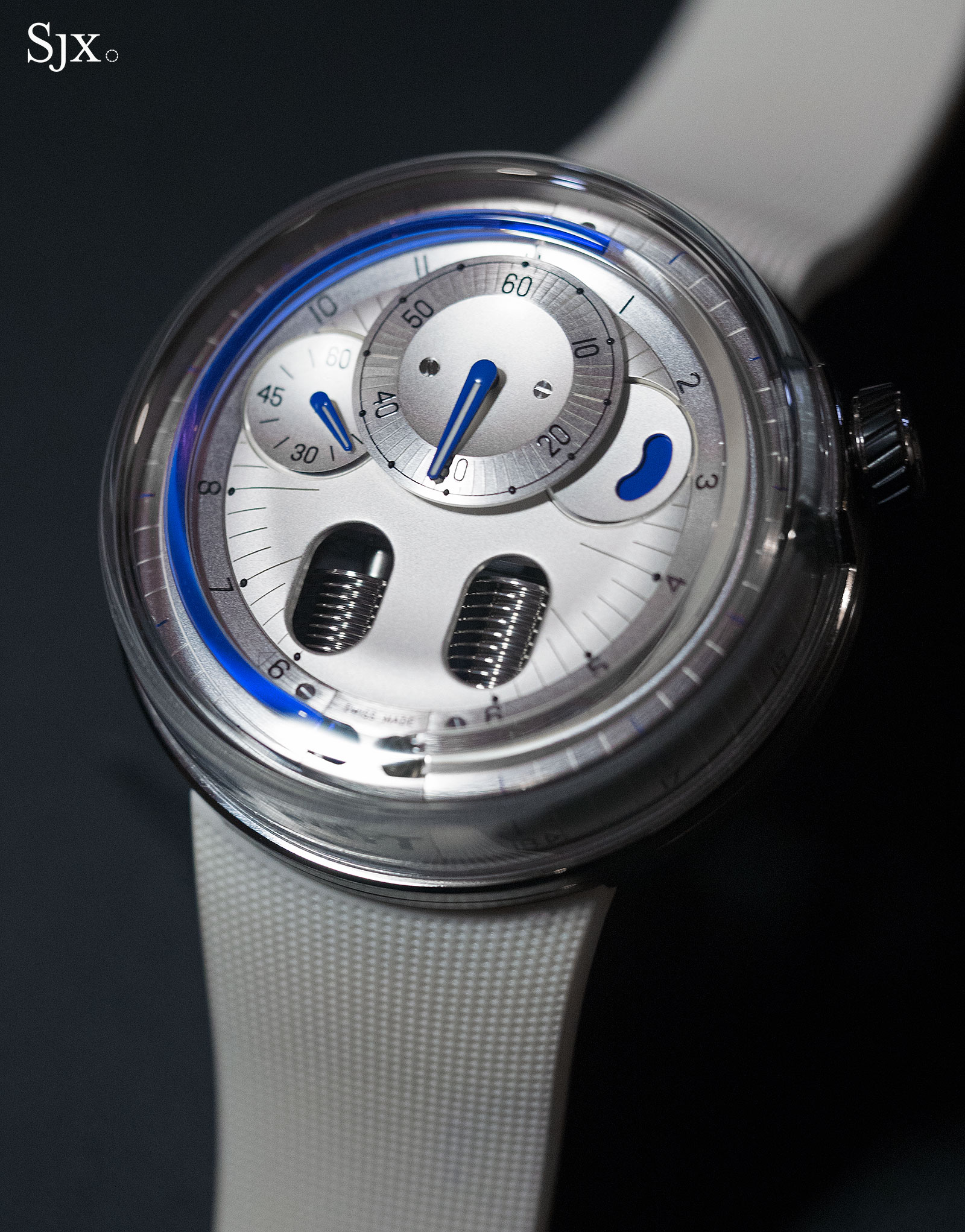 HYT‘s watches to date have ranged from big with the H1 to extremely big with the H3. The recent H4 Metropolis even has a built-in LED lighting system that’s cool, but still a novelty. The H0, or more properly the H0, does away with all that. Cleaner and smaller, the H0 is more wearable, both physically and stylistically. And it’s also the brand’s new entry-level model.

Mechanically the H0 is identical to the H1, with the same calibre inside that was developed in part by movement specialist Chronode. It’s hand-wound with a 65-hour power reserve, and indicates the hours via two fluids in a tube that circles the dial. The two liquids, one coloured and the other clear, but both immiscible, are pushed through the tube by a pair of accordion-like pumps visible at six o’clock. A distinct meniscus between the two fluids indicates the hours, travelling clockwise as time passes, before quickly rushing back to the origin when it hits six o’clock. Minutes are indicated on a sub-dial at 12 o’clock, with seconds to one side and a power reserve on the other. But where earlier HYT watches emphasised the mechanics of the watch, revealing the gears of the movement and installing a turbine-shaped seconds hand, the H0 makes it as simple as possible.

The surfaces of the various dials are smooth, mostly with a sandblasted finish, marked with clear, elongated hashmarks for the hours and minutes. Clear numerals are found on the hour, minute and second tracks. The H0 doesn’t try too hard, which is why it works. Made of titanium and 48.8mm in diameter, the case is still enormous, but tangibly more wearable than the other models in the line-up because it has no lugs. The rubber strap is screwed onto the base of the case, making its effective size significantly smaller than the other round HYT watches, all of which have chunky and long lugs. The lug-less case also helps the streamlined look, which is further enhanced by the impressively large sapphire crystal that resembles a glass cover for a cake stand. It goes over the sides of the case, allowing the hours to be read at an angle – a neat visual trick but not any more practical since the minutes can only be seen on the dial. Available in three different guises – the blue on white is by far the most compelling – the H0 is part of the regular collection and is likely the first of a new design direction for HYT. It’s also the new entry-level HYT wristwatch, not cheap by any means, but more affordable.