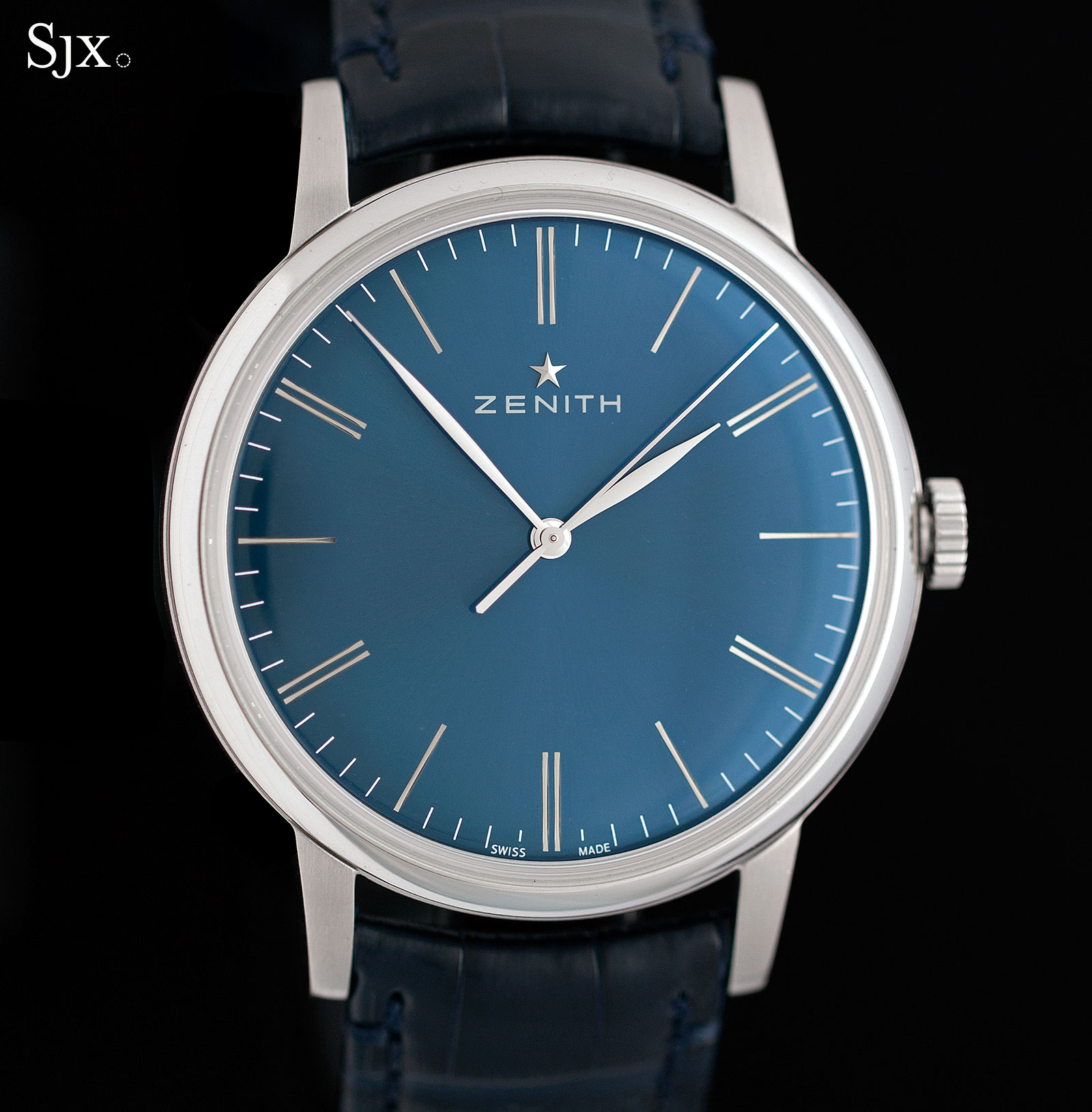 Zenith is best known for its El Primero – the chronographs are synonymous with the brand – but historically it was an accomplished maker of all manner of movements. The Elite 6150 is Zenith’s newest calibre, introduced just last year in the most conservative of styles – steel with a silver dial – but now offered with marginally more choice.

The original Zenith Elite was a series of automatic movements introduced in 1994 that were robust – good enough that Urwerk uses them as the base for some of its movements – but small by today’s standards at just under 26mm in diameter.

At 30mm the Elite 6150 is larger, suiting contemporary watches better, but for good reason. Instead of a single barrel it has two, lengthening its power reserve to 100 hours, or over four days – double that of the original Elite. The 6150 is 3.92mm high, making it slightly thicker than the first generation Elite, but still thin enough that the resulting watch is under 10mm. The movement is finished to a standard typical of Zenith, which is handsome but not elaborate. All the decoration is clearly mechanically applied, but it’s as good as it usually gets in this price range and still visually appealing. While the movement is cutting edge for Zenith, the design of the watch veers towards conservative. The dial is extremely simple, almost ascetic, with a metallic finish and radial brushing. Even the elongated hour markers are printed, rather than applied. The only flourish on the dial is the applied Zenith star at 12 o’clock. For a low key dress watch, this look works well. That being said, the case is large at 42mm from edge to edge, but seems significantly bigger due to the narrow bezel and slim lugs. The size helps it feel modern.

Originally available only in stainless steel, the Elite 6150 was introduced in 18k rose gold at Baselworld this year. While exactly the same as the steel model design-wise, the rose gold version looks more elaborate just because of the colour and weight of the precious metal. Surprisingly for Zenith, which typically offers significant value for money, the Elite 6150 verges on being expensive. The most basic El Primero chronograph costs only a few hundred dollars more than the time-only Elite. Even a fancier El Primero, like the Range Rover special edition in ceramised aluminium, is only about 10% higher. Even a comparable Jaeger-LeCoultre is marginally less.

That’s likely due to the fact that the El Primero is now almost 50 years old and essentially unchanged, so its development costs have long been amortised away. The 6150, on the other hand, is brand new and still produced in relatively small numbers.