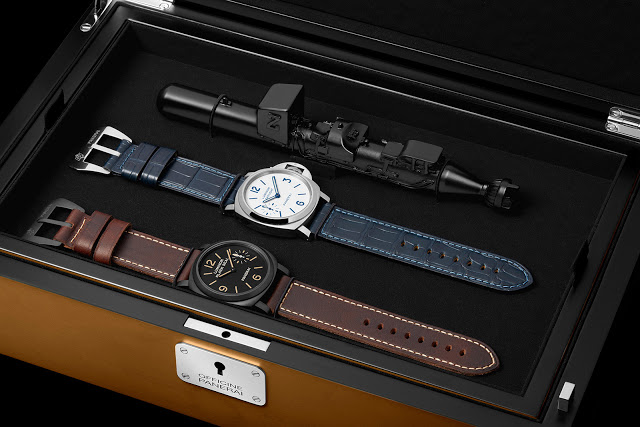 Just two years after the last two-piece Slytech reissue set, Panerai has once again turned to its most desirable timepieces of the 1990s for inspiration. Based on timepieces made for actor Sylvester Stallone – hence the Slytech nickname – the Luminor 8 Days Set PAM786 consists of two wristwatches, including an unusual white dial Luminor with blue hour markers and hands.

While both watches in the set are 44 mm Luminor watches, each is sharply different from the other. The Luminor Daylight 8 Days (PAM650) is modelled on a 1996 wristwatch made for Stallone’s role in tunnel collapse film Daylight, but one that never got past the prototype stage. Only a handful of watches were made with blue hands and markers, a feature that has been reproduced with the new Luminor Daylight 8 Days. The second watch in the set is the Luminor Black Seal Left-Handed 8 Days (PAM649). This Luminor desert (Italian for “right-hand”) has its crown on the left of the case, having been designed to be worn on the right hand. The steel case has been coated with diamond-like carbon (DLC), given it a black finish. Though both watches in the set are inspired by 20 year old timepieces, both are equipped with the modern day P.5000 movement. Made in-house by Panerai, the P.5000 is hand-wound with an eight day power reserve. The PAM786 set comes in a large pear wood box with various accessories, including spare straps and a scale model of the submersibles used by Italian navy frogmen during the Second World War.