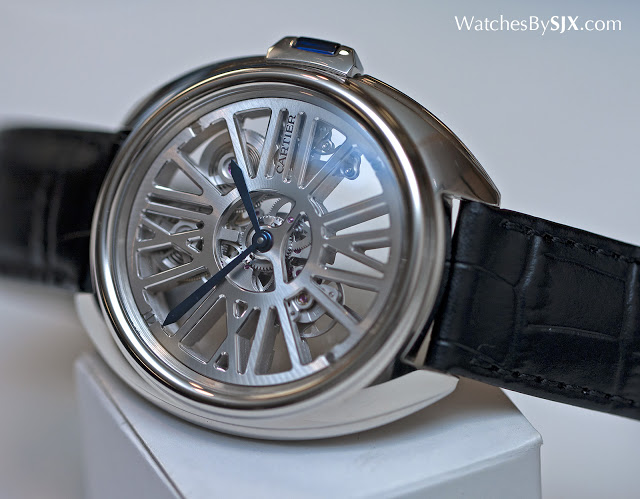 Soon to be officially launched at SIHH 2016, the Clé de Cartier Automatic Skeleton features a newly developed skeleton movement with automatic winding, a first for Cartier. We bring you a first look with original photos, specs and pricing. Skeleton movements are a favourite of the Carole Forestier, the talented head of Cartier‘s movement development unit. Needless to say Cartier has excelled at creating open-worked movements, with the skeletonised Roman numeral dial (found on the Tank MC Skeleton for example), becoming a signature of the brand. Now for the first time, that distinctive style has now evolved to include an automatic movement with the new Clé de Cartier Automatic Skeleton. The Clé de Cartier Automatic Skeleton is the first open-worked model in the cushion-shaped  Clé de Cartier line that was unveiled in early 2015. It bears all the hallmarks of Cartier’s skeleton watches including the most important: a baseplate that’s open-worked to create oversized Roman numerals, something that’s even found on the asymmetric Crash Skeleton. But the 9621 MC movement in the Clé de Cartier Automatic Skeleton is completely new, being the first automatic skeleton movement developed by Cartier. Based on the in-house 1904 MC movement, the 9621 MC is a large and artfully open-worked movement. In order to ensure structural rigidity of the movement, the bridges and baseplate are made of German silver, a copper, zinc and nickel alloy that’s harder than the brass used in typical movements. Just over 31 mm in diameter, most of the space occupied by the movement is empty, giving the watch a high degree of transparency. Winding discreetly One of the biggest challenges in developing this movement was to ensure the rotor was both invisible, yet sufficiently heavy to wind the movement, which has twin barrels and a three day power reserve. While most skeleton movements try to minimise the rotor in order to get it out of the way, micro-rotors are a popular but sometimes inefficient solution, the 9621 MC has a full rotor, but one that has been radically slimmed down. Made of 22k gold, the rotor is essentially a semicircular outline with nothing inside. The two supports that extend from the central axis blend into the Roman numerals of the baseplate, cleverly camouflaging the rotor. This was only possible due to the diameter of the movement, which means that although the rotor is barely there, it is still heavy enough to wind the two barrels completely in 4.8 hours, compared to the 4.6 hours for the ordinary 1904 MC. The Clé de Cartier Automatic Skeleton has a 41 mm case made of palladium, a dense white metal of the platinum family. Like all other Clé watches, it has an oblong crown topped with a blue sapphire insert. In order to ensure the crown is always the right side up, the stem has a built-in, spring-loaded mechanism to pop the crown back into position. Pricing The Clé de Cartier Automatic Skeleton will cost €49,000 in palladium, and €99,000 in palladium set with diamonds on the case and buckle.