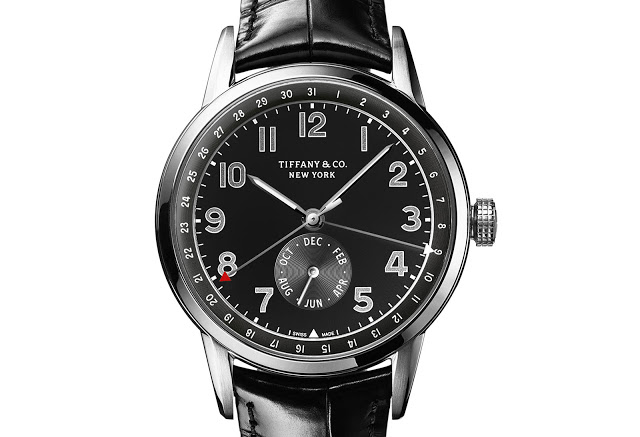 Originally introduced as a simple calendar wristwatch, the Tiffany & Co. CT60 has now been upgraded and boasts an annual calendar complication, meaning the calendar only has to be adjusted once a year. The new CT60 Annual Calendar makes its debut as a limited edition clad in a striking, monochromatic black and silver.

Ordinary calendar watches cannot distinguish between months, so they have to be advanced at the end of any month with less than 31 days. Annual calendars, on the other hand, have gearing that accounts for months with 30 and 31 days. No manual adjustment is necessary, except in February with its 28 or 29 days. Consequently it only needs setting once a year, hence the name annual calendar. Although a big step upwards in terms of functionality and mechanics, the annual calendar nonetheless retains the exact same aesthetic as its simpler predecessor. The roots of the CT60 – the New York jeweller’s flagship mechanical watch – lie in a Movado calendar wristwatch made for Tiffany’s and gifted to Franklin Delano Roosevelt for his 63rd birthday in 1945. A clean design typical of the era, the look is characterised by large Arabic numerals and pencil-shaped hands.

On the CT60 the visuals are similar, but executed in a more elaborated manner. The numbers are printed in silver powder, giving them a granular texture with a slight sparkle. And the black dial is finished with a soleil, or sunburst, brushing. Complementing the colour palette of the dial, the case is in brushed, 18k white gold, and 40mm in diameter. The observant might notice the faint similarities between the CT60 limited edition and the Patek Philippe 5396G annual calendar made for Tiffany & Co. in 2012. Available only at Tiffany & Co. stores in Asia, the CT60 Annual Calendar black soleil limited edition is priced at S$28,700, equivalent to US$20,500. That’s a small (just over five percent) increase over the retail price of the simple calendar CT60.