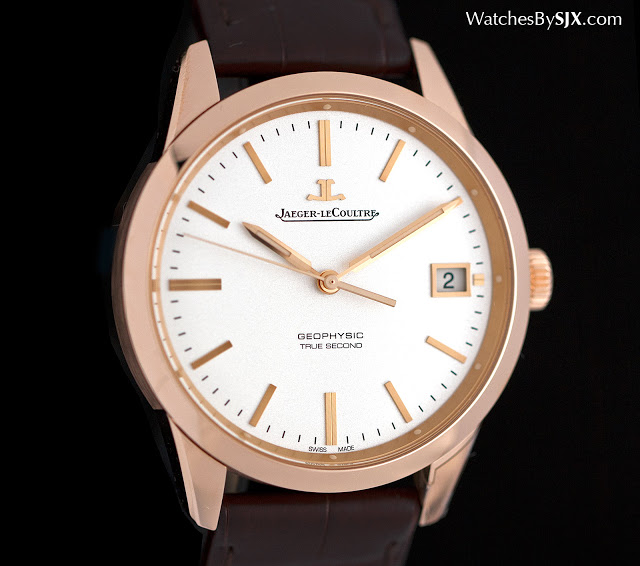 Jaeger-LeCoultre‘s follow-up to the well received Geophysic limited edition launched in 2014, the Geophysic True Seconds sports a look reminiscent of gentlemen’s wristwatches from the late 1960s or early 1970s. But it does not just rely on its retro looks to get by. The Geophysic True Seconds is equipped with the calibre 770, a new movement featuring a deadbeat seconds and independently adjustable hour hand.

Like the Geophysic limited edition, the new True Seconds is a vintage-inspired design blended with a vague idea of precision chronometry. The Geophysic remake was modelled on the namesake chronometer of the 1950s conceived for the International Geophysical Year (IGY), intended for scientists and explorers of the IGY expeditions. But the first Geophysic reissue contained an ordinary movement, the workhorse calibre 899 also found in the brand’s entry level Master Control Date. In contrast, the Geophysic True Seconds is powered by the calibre 770, a recent development that makes its debut here. The calibre 770 is an automatic movement with a 40-hour power reserve with three notable features. One is the deadbeat seconds, which means the seconds hand ticks forward in one second steps, just like a quartz watch. Naturally, it is not a quartz movement, instead extra gearing has been added to give the seconds hand its ticking motion. That’s partially visible underneath the rotor, with an aperture in the bridge that reveals the tiny tension spring for the deadbeat seconds gear. The rotor is made of 18k rose gold and open-worked to form a large Jaeger-LeCoultre. The prominent grain of the striping on the rotor indicates the decoration has been engraved by machine, rather than applied with a spinning pad as done for the softer stripes on the movement bridges. Another feature of the calibre 770 is the independently adjustable hour hand. With the crown pulled out one stop, the hour hand can be advanced in one hour intervals, without affecting the position of the minute or seconds hands. This is useful when changing timezones as it allows the wearer to set the watch to a new timezone without losing the previously synchronised time. And the calibre 770 also utilises the new Gyrolab balance wheel. Unlike a conventional balance that’s a complete circle the Gyrolab is shaped like somewhat like the Jaeger-LeCoultre logo, with adjustable weights for regulation. It’s supposed to function more efficiently because it has less air resistance when in motion. While that may be true, the functional benefit is likely marginal.

A throwback to the seventies

The Geophysic True Second has an air of the early 1970s about it, with its straight lugs, baton indices and pencil-shaped hands. It’s a classical and uncontroversial look, one that’s right for the tastes of the market at the moment.  Up close the dial does offer some extra detail, including the grained silver surface and the luminous dots on the sloped surface of the dial flange. That’s a detail taken from last year’s Geophysic limited edition.

Like the rotor, the applied elements of the dial (hour markers, date window frame and logo) have been cut with a diamond-tipped tool, a process that leaves behind characteristic striations visible up close.

Available in pink gold or steel, the case is a good 39.6mm in diameter with a height of 11.7mm. Not overly large, the volume is still enough to give it a satisfying feel on the wrist. It helps that the watch is relatively thick compared to its diameter, because the deadbeat seconds mechanism adds significantly to the height of the movement. The calibre 770 is 6.57mm high; in comparison the calibre 899 in last year’s Geophysic limited edition is just 3.3mm. Though nearly identical, one key difference between the steel and gold versions is the colour of the Super-Luminova on the dial. The steel sports parchment-coloured lume, giving it a significantly more vintage look than the pricier pink gold model. Up Close with the Jaeger-LeCoultre Geophysic Universal Time