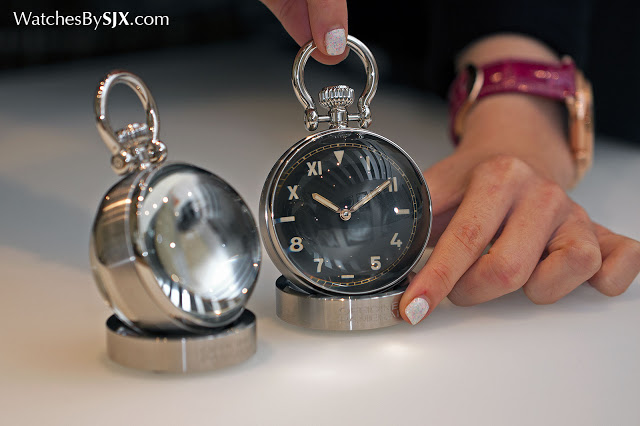 Panerai recently introduced a pair of table clocks, both equipped with an eight day movements, and shaped like a bubble thanks to enormous, domed mineral crystals. Panerai has put its signature wristwatch dial styles into a pair of spherical table clocks, the PAM641 with the dot-and-dash S.L.C. dial, and the PAM651 with a “California” dial. Both are powered by the P.5000, a hand-wound movement that’ll run for eight days on a full wind. The table clocks measure 65mm in diameter, with the bulk of the case volume coming from the bulbous crystals on the front and back. So thick that they distort the dial slightly, the crystals are made of mineral crystal, which is fairly dense, giving the clocks a solid heft in the hand. Visible through the back is the P.5000 movement, the brand’s entry-level in-house calibre that’s also found in the Luminor 8 Days 44mm. The rest of the case is stainless steel, with the bow around the crown shaped like the shackle, a metal loop used on sailboats to secure ropes. A round steel ring serves as a stand, allowing the clocks to sit upright. Both clocks are actually a follow-up to the PAM581 table clock introduced in 2014. That was fitted with the classic Panerai dial with baton markers and Arabic numerals. The new PAM641, on the other hand, has an S.L.C. dial, named after the Siluri a Lenta Corsa human torpedoes used by Italian navy frogmen during the Second World War. Unusual for its sparse appearance, the S.L.C dial was only found on prototype wristwatches. And the PAM651 has the familiar “California” dial, with Roman numerals on the top half and Arabic numbers on the bottom. Its name originated in the 1980s, when refinished dials in this style were frequently manufactured by a Californian company, the Kirk Rich Dial Corporation. Incidentally, alongside the table clocks Panerai also introduced the Luminor 1950 DLC Titanio PAM629 with a “California” dial. The Table Clocks PAM00641 and PAM00651 carry the same retail price, with a price of S$7350 including 7% tax in Singapore. That’s equivalent to US$5160.