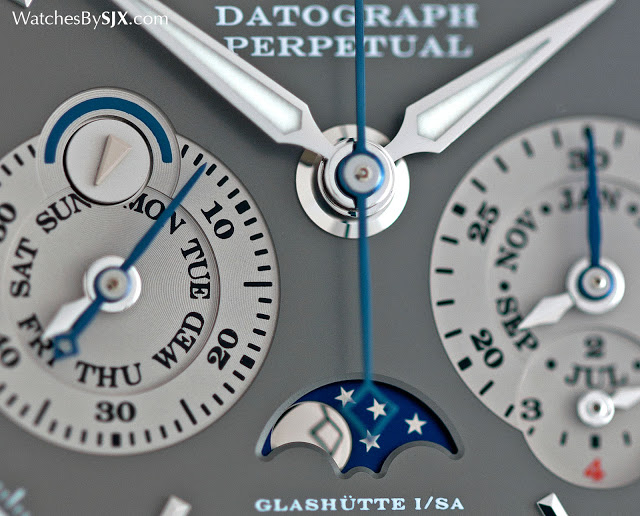 Lange has a clear design code for each of its lines, with Arabic numerals for the 1815 and Romans for the Lange 1. The Saxonia is the simplest, with baton indices for the hours. And because the Datograph line is now part of the Saxonia (sort of), all its constituents watches feature that clean, modern aesthetic. The new Datograph Perpetual features a new dial that has been tweaked in a subtle manner, so much so that it looks almost the same as the old dial from a distance. The most obvious change is the removal of the Roman numerals; now all the indices are baton markers. Five minute markers on the outer edge of the dial have also been removed, enhancing the clean look. And “Glashütte I/SA” is now printed just below the moon phase, short for “Glashütte in Sachsen”.

The rest of the dial remains unchanged, and so still possesses the shortcomings of the first generation model. Each of the two sub-dials packs in three different indicators, while the moon phase is tiny, almost like it’s trying to hide itself. Though the new dial is cleaner, the Datograph Perpetual still lacks the legibility of the equivalent model from Patek Philippe, the ref. 5270.

Fortunately the view from the back makes almost everything forgivable. It’s equipped with the calibre L952.1, a movement based on the original Datograph calibre L951.1. The movement is a joy to look at. It features Lange’s in-house, adjustable mass balance but unlike the current Datograph Up/Down movement, it lacks the upgraded mainspring and extended power reserve. That means the Datograph Perpetual runs for a brief 36 hours when fully wound, somewhat of a detriment for a perpetual calendar which requires effort to set once it’s stopped.