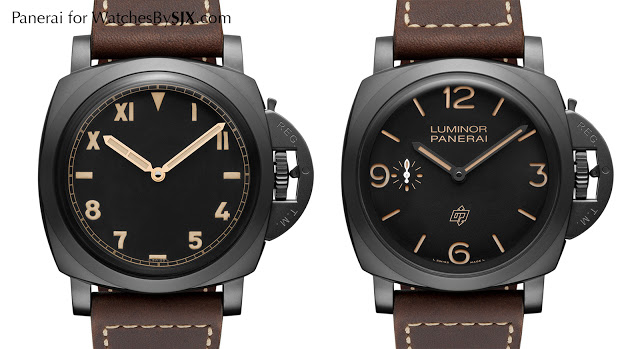 Only just unveiled at Watches&Wonders 2015, the Panerai Luminor 1950 PAM00617 and PAM00629 are a pair of Special Editions (which mean limited edition in Panerai-speak) featuring titanium cases coated with diamond-like carbon (DLC). Both are heavy on vintage Panerai style but with a decidedly modern twist, continuing Panerai’s recent inclination of iterating elements from vintage Panerai watches in novel combinations. The PAM629, for instance, is the first Luminor model with a California dial.

The Luminor 1950 3 Days Titanio DLC watches share the same 47mm, DLC-coated case in lightweight titanium featuring a crown lever engraved with “1950”, a reference to the year the Luminor case made its debut (read our story on Panerai history for more). Both have domed crystals, and solid case backs with the P.3000 movement underneath. It’s hand-wound with a three day power reserve. Both the PAM617 and PAM629 are limited to 300 pieces. The PAM617 features the traditional Panerai dial with the twist of the “OP” logo at six o’clock, and once again embossed on the leather strap. Like many other modern Panerai watches, it has ivory-toned Super-Luminova on the dial and hands to mimic the look of a vintage watch. Curiously the PAM629 combines the crown-lock Luminor case with a “California” dial that’s traditionally found only in the Radiomir (distinguished by its wire lugs). The dial is black, with faux vintage Super-Luminova and gilt hands. Traditionalists might not appreciate this pastiche. Acquiring its nickname from the fact that vintage Rolex Bubbleback dials were refinished in vast numbers by a company in California back in the 1980s, the “California” dial has Roman numerals on the top half and arabic numbers on the bottom. This style of dial actually appeared first on watches made by Rolex, the same company that made the Radiomir cases for Panerai. Panerai has given its signature Luminor 1950 a new twist with pair of Special Editions featuring DLC-coated titanium cases, the PAM617 and decidedly unorthodox PAM629.