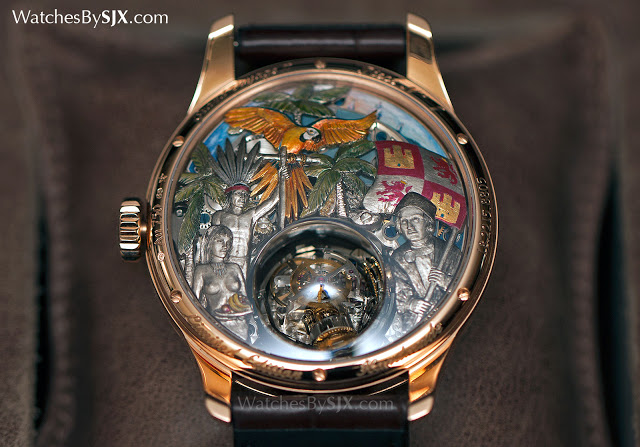 The Zenith Christophe Colomb Hurricane Grand Voyage II is the second instalment in a series of watches dedicated to the Italian explorer. Like the first edition, the Christophe Colomb Hurricane Grand Voyage II is equipped with Zenith’s unique gyroscopic escapement as well as chain and fusee constant force mechanism. On its back Columbus and the indigenous peoples of the New World are depicted in hand-engraved relief.

On the back the bridges of the movement provide the canvas for the miniature. Each element is a piece of gold, engraved and painted by hand. The detail and depth is impressive, though the theme is a contentious one (bringing to mind another Zenith, the Latin American revolutionary-themed Hurricane Revolución). Whereas the first edition of the Grand Voyage watch just portrayed Columbus and his ship, the Grand Voyage II illustrates the discovery of the Americas in 1492. On the right Columbus stands steadfast under the flag of Imperial Spain, while on the left the natives stand. The chief is wearing feathers and carrying a parrot, while his female companion is bearing a plate of fruit. In the background three ships can be seen on the horizon, the Niña, Pinta and Santa Maria. The midnight blue dial on the front is actually the main plate of the movement, which has been engraved with stars and the Zenith logo in relief, and then lacquered around the reliefs. Each of the three sub-dials is a gold ring covered in white enamel. Just below the sub-dial at 12 o’clock that shows the time is the chain and fusee. Essentially a cone linked by a chain to the barrel, it uses the principle of leverage to even out the power delivered by the mainspring. As the mainspring winds down, the chain unwinds from the cone, from top to bottom, compensating for the diminishing torque.

A consistent power delivery throughout its running time is one half of the story (though Zenith did just use that one half in another wristwatch). The other is the regulator, which is suspended in an extraordinarily complex system of gears – the gyroscopic carriage alone is 173 parts – that not only keeps the escapement ticking, but also keeps it level at all times. Functioning like the gimbals in a marine chronometer, the gyroscopic escapement keeps the balance wheel parallel to the ground. In that position, gravity acts on the balance evenly all the time, which means there are no gravitational errors in timekeeping. Like Zenith’s signature El Primero movement, the Hurricane movement runs at 36,000 beats per hour (bph), higher than the 28,800 bph of a typical movement. A higher frequency means greater inertia of the balance wheel, which promises more stable timekeeping since the balance is more likely to continue as it is, regardless of shocks. The watch has a case diameter of 45mm, large enough to accommodate the gyroscopic escapement as well as the chain and fusee, both of which are particularly large mechanisms. And the spherical motion of the escapement means that the sapphire crystal on the front and back have a protruding bubble.

The Christophe Colomb Hurricane Grand Voyage II is limited to just 10 pieces, with a price of US$353,000.