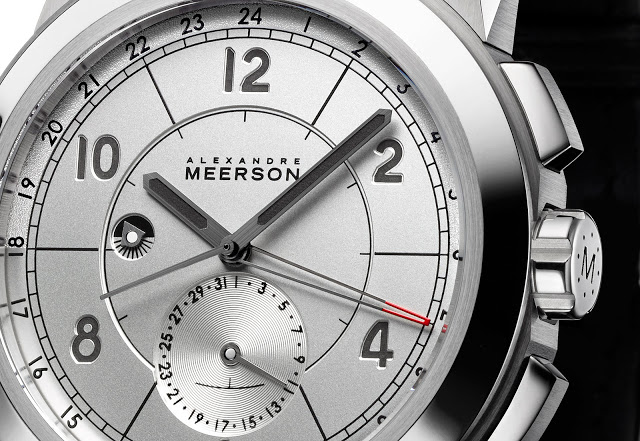 The son of a watch designer active in the 1970s, Alexandre Meerson recently took up his father’s mantle. Based in England, Meerson’s latest creation is the D15 MK-1 GMT, a dual time zone wristwatch with a movement from Vaucher, the specialist that’s the sister company of Parmigiani. The D15 MK-1 GMT is available with three dial colours – blue, white and black – while the 44mm case is offered in titanium, diamond-like carbon coated titanium or white gold. A second, central hour hand indicates another time zone, while the day and night indicator for home time is at nine o’clock. The sub-dial at six is for the date. Voucher produces the base movement as well as does assembly and quality control of each timepiece. The rest of the components are made by suppliers, including complications builder Dubois Depraz which is responsible for the dual time zone module.

Starting at US$18,600 for the titanium model, the D15 MK-1 GMT is a pricey timepiece, but not unexpectedly since Vaucher is amongst the highest cost and highest quality suppliers in Switzerland.