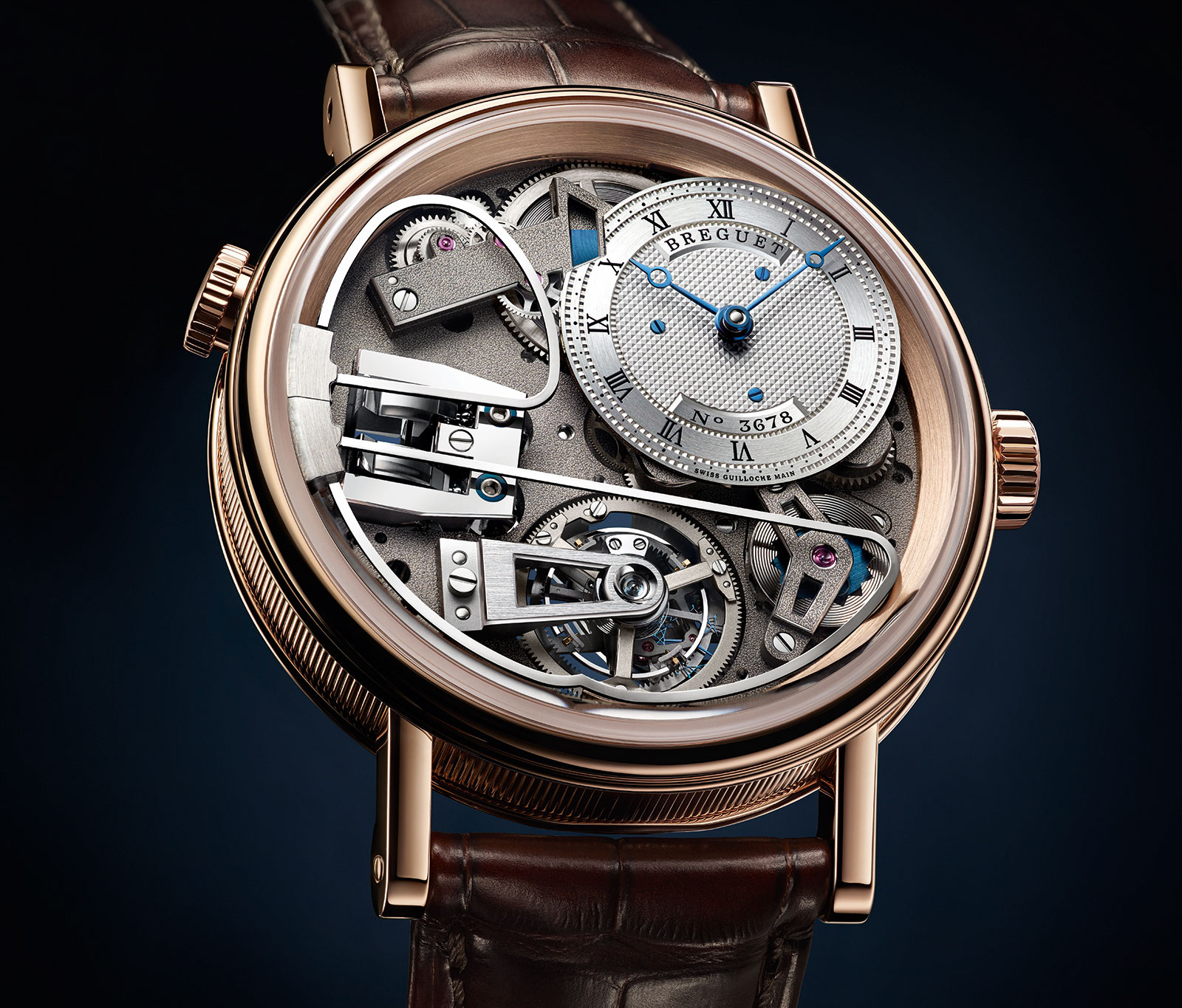 Breguet is on a roll with its new Tradition timepieces unveiled at Baselworld to mark the 10th anniversary of its most distinctive modern wristwatch. The Tradition Chronographe Indépendant, for example, is an innovative new chronograph construction. The one that really takes the cake, however, is the Tradition Répétition Minutes Tourbillon 7087, a striking wristwatch with several novel and innovative features.

Wristwatch minute repeaters have evolved significantly over the last three decades, beginning as what were essentially miniaturised pocket watch movements, to rapid progress in recent years, with Cartier, Piaget and Jaeger-LeCoultre making notable timepieces. But the new Breguet Tradition Répétition Minutes Tourbillon 7087 goes further than most in its reinvention of a traditional complication.

To start with the Tradition repeater is automatic, with a peripheral rotor that is mounted around the edge of the movement. That minimises the space needed for the winding mechanism, and also leaves the view of the movement unobstructed. Its power reserve is 80 hours, with a power reserve indicator at 12 o’clock, just beside the time display.

The watch was constructed in order to achieve a particular type of sound, selected from a set of 100,000 synthetic sounds. Consequently, much of the construction of the Tradition repeater is departs from tradition (no pun intended).

Instead of the conventional round shape that were invented by Abraham-Louis Breguet himself in 1783, both gongs are bean-shaped and differing in size. These gongs are attached to the bezel, itself mounted on the case band with three pillars that allow both the bezel and crystal to vibrate. That vibration aids the tranmission of sound from the gongs to the outside of the case. The gongs are made from gold as is the watch case, namely white or rose gold, while the base plate and bridges of the movement are titanium. Titanium’s lightness (the alloy is not dense) means it transmits sound well.

Both the hammers are mounted perpendicular to the plane of the case, instead of being parallel. Only one other repeater wristwatch has a similar feature, the Van Cleef & Arpels Poetic Wish five minute repeater. While the Van Cleef repeater gongs move on the same plane as the watch case, the hammers in the Breguet move upwards, striking the gongs from below. And the usual buffer spring for the hammers (which prevent the hammer from striking the gong twice as it bounces back), has been modified to pull back the hammer instantaneously once it hits the gong. This allows the hammer to strike the gong with maximum force, without the damping effect of a buffer spring that reduces the striking power of the hammer. A more powerful strike results in a louder chime.

The power for the striking mechanism is transmitted by a tiny chain, instead of gears. Similar to the chain found in the chain and fusée constant force mechanism, this feature was inspired by the No. 160 pocket watch Breguet made for Marie-Antoinette.

Conventional repeater governors (a spinning mechanism that regulates the pace of the repeater chime) either depend on air or mechanical friction to operate. Breguet uses a magnetic governor comprised of magnets that slow the spinning of silver weights that is nearly silent, so it does not detract from the repeater chimes.

The perforated case back is fitted with a gold membrane inside that increases the volume of the repeater chimes by vibrating the empty space in between the membrane and the case back. Because the membrane is fixed to the sapphire crystal of the display back, the movement is unobscured.

For good measure the Tradition repeater is also equipped with a tourbillon that has an escape wheel and hairspring in silicon. The Tradition Répétition Minutes Tourbillon has a case diameter of 44 mm, with the button at 11 o’clock to activate the repeater. A bayonet locking mechanism secures the button, requiring a slight twist to unlock it. The price of the Tradition Répétition Minutes Tourbillon is 450,000 Swiss francs or 662,000 Singapore dollars, in either rose or white gold.

Breguet has remade the minute repeater complication, endowing the Tradition Répétition Minutes Tourbillon 7087 with ingenious features ranging from a unusually shaped gongs to a vibrating bezel and crystal, making this one of the most signficant minute repeater wristwatches.