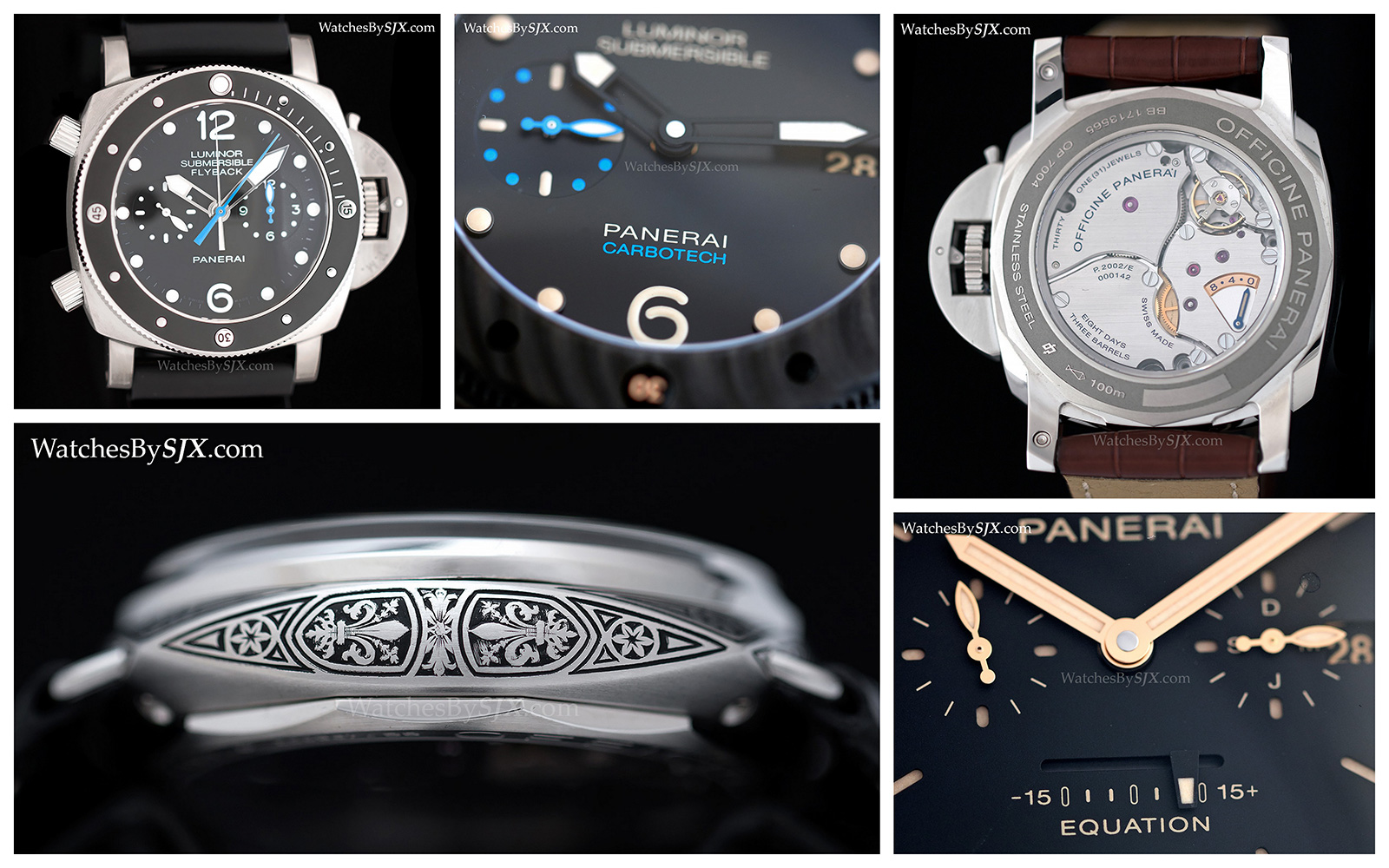 Panerai’s SIHH 2015 line-up was compact, comprising five key models, but it did bring some novelty to the table, including the Carbotech Submersible and the elaborately engraved Radiomir Firenze. A cult brand that has reached maturity, Panerai kept its focus this year, offering just five new models (though one is not a typical Panerai). Interestingly they were all clustered in the mid-five figure price range, with no entry-level models introduced at SIHH 2015. [All prices are in Singapore dollars (S$) and include 7% tax. US$1 = S$1.35] Of the five new models, two were Submersible models, Panerai’s name for its dive watches with rotating bezels. The one that got the most attention was the Luminor Submersible 1950 Carbotech (PAM616), featuring a carbon fibre composite case rated to 300 m. Carbon composite materials are not new in watch cases, in fact they are somewhat passé, but this is the first time Panerai is using this material. The striped pattern on the case comes from the method used to produce the material, which calls for layering multiple sheets carbon fibre with a polymer to bind them together, before being baked in an autoclave to harden it. The markings on the dial have bezel have a tan, faux-antique look, as well as bright blue accents, something Panerai favours this year. Thought a lightweight material, the Carbotech Submersible is quite weighty, likely due to the size of the case as well as the metal inner case to which the case back is screwed. The case is 47 mm in diameter, with the automatic P.9000 movement inside. The Carbotech is no a limited edition, 500 pieces will be made annually, with a retail price of S$24,800. The blue accents are also found on the new Luminor Submersible 1950 3 Days Chrono Flyback Automatic Titanio, offered in two guises, both flyback chronographs. The simpler of the two is the PAM614, equipped with a 30-minute chronograph. This has a 47 mm titanium case, and the P.9100 movement inside. Thanks to the co-axial placement of the elapsed seconds and minute hands on the central axis, the dial is clean, save for the constant seconds at nine and a date at three. 500 pieces will be made each year, priced at S$22,400. Using the same movement but with the addition of a 12-hour counter is the PAM615. Beside the chronograph, this is also distinguished by the black ceramic insert on the bezel, a feature also found on the Luminor Submersible Amagnetic. Also an annual edition of 500 pieces, this will cost S$24,800. The other new chronograph launched is an entirely different beast. 52 mm in diameter, the Mare Nostrum Titanio is a remake of a prototype deck chronograph for the Italian navy dating from the 1940s. Limited to just 300 pieces, this is equipped with a beautifully finished Minerva movement, explaining the S$58,200 price tag. You’ll find more about this in the story published last month. Also a limited edition is the Radiomir Firenze PAM604. Limited to 99 pieces and available only at the Florene boutique, the Radiomir Firenze has a 47 mm steel case decorated with gun engraving. Engraved by an Italian craftsman, decorating the watch case takes a week. The engraved motif is taken from Florentine history, and includes the Florentine lily, the symbol of the Italian city. The dial is black, but unlike most other Panerai dials it has a sunray brushed finish. Inside is the hand-wound P.3000 movement. The Radiomir Firenze costs S$29,800. The last new timepiece is something that strays far away from Panerai’s core competencies: an equation of time with eight-day power reserve. This is not Panerai’s first watch with that complication, the honour goes to the L’Astronomo, which had both a tourbillon and equation of time.  Though based on the same basic movement, the new equation of time wristwatch lacks a tourbillon, making it significantly more affordable. Offered in a 48 mm Radiomir 1940 case (PAM516) or 47 mm Luminor 1950 case (PAM601), the equation of time is powered by the P.2002/E calibre. A scale on the dial graduated from -15 to +15 indicates the equation of time, that is the difference between the standard 24-hour day and solar time. Because the Earth orbits around the Sun in an ellipse rather than a circle, the actual length of a day is not exactly 24 hours. But due to the graduations of the scale, the equation of time displayed is only an approximation. The sub-dial at nine is the seconds, while the one across is for the month – “D” indicates December, “M” is for March and so on. Over on the back an indicator for the eight-day power reserve is integrated onto the bridge for the gear train.