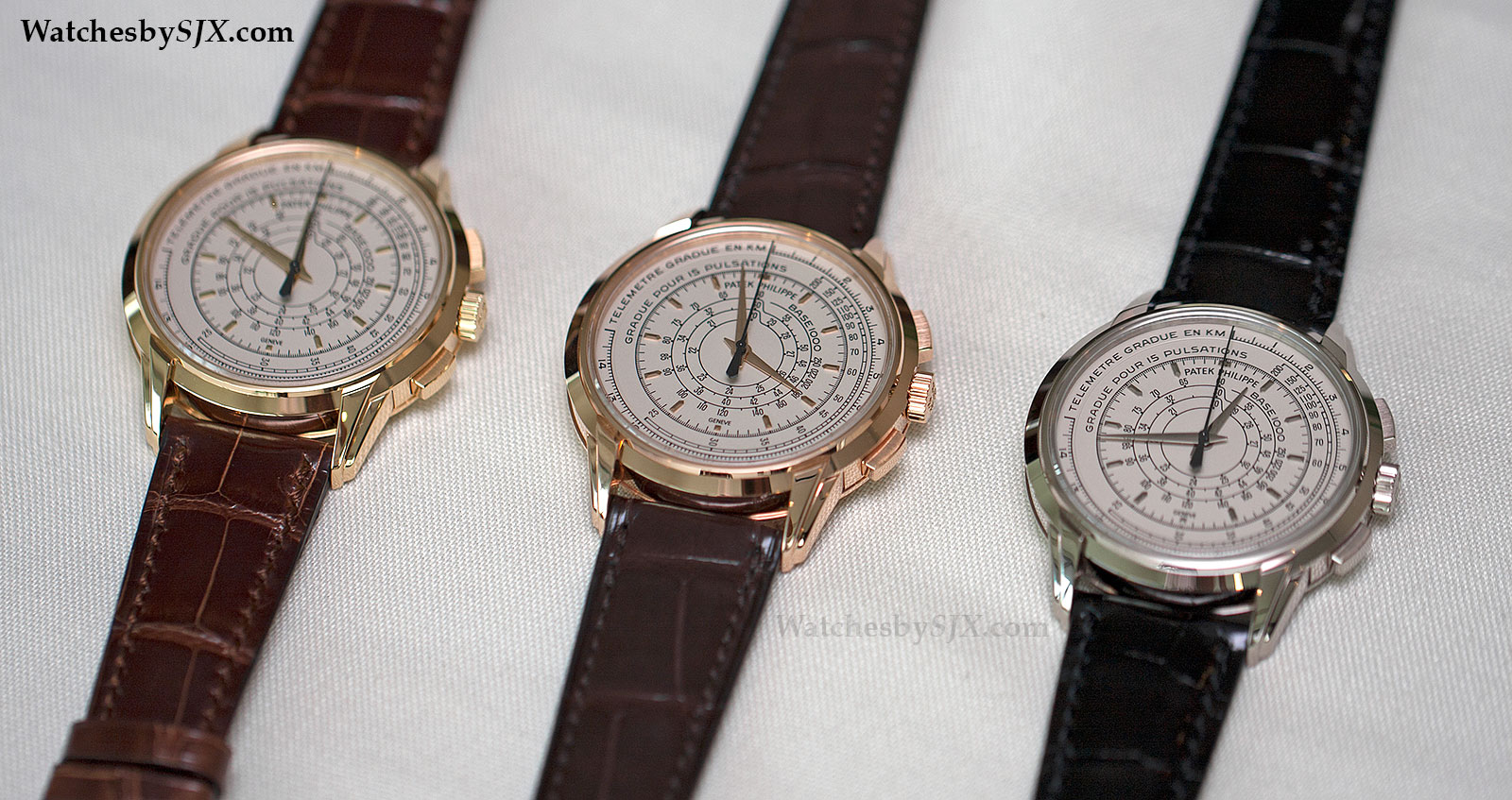 The 175th anniversary collection introduced by Patek Philippe in October last year comprised four models, two practically unaffordable for most, and the remaining pair being relatively accessible. One is the World Time Moon (which we looked at over here), and the other is the Multi-Scale Chronograph, a wristwatch with a triple logarithmic scale dial that fuses a vintage theme with modern styling, available as a men’s watch (ref. 5975) or ladies’ (ref. 4675). Distance is measured by the outermost scale, the telemeter. Starting the chronograph when the event is seen, and stopping it when the event is heard gives the distance between the observer (or the wearer of the watch) and the event, since light and sound travel at known, fixed speeds. In the past this was useful to determine the location of artillery on a battlefield.

The middle scale is the pulsometer, a function intended for medical professionals. Timepieces with a pulsometer are often known as doctor’s watches for this reason. The chronograph is started along with the pulse count, and stopped when the count hits 15 as the pulsometer scale on the dial is graduated for 15 heartbeats. Once stopped the seconds hand will be pointing to the heart rate per minute, which it does by extrapolating the 15 beats per quarter minute.

And the last scale is the tachymeter, which measures speed. Calibrated for a distance of 1000 m or 1 km, the tachymeter only works when an object is travelling over that particular distance. The chronograph is started when the object passes the starting kilometre marker, and then stopped when it passes the next kilometre marker. The speed of the object over the 1 km travelled is then shown on the dial.

Such multi-scale dials were easy to find on chronographs in the mid-twentieth century, with watchmakers like Longines and Minerva making notably beautiful examples. They were useful before convenient electronic measuring equipment became widespread. However, watches of that era with such dials typically used multi-colours for the multi-scales, red and blue were common, making them more legible.

Patek Philippe, on the other hand, made the scales in one colour. Though legible, the multi-scale dial is monochromatic and busy. To a traditionalist, the dial is not as sophisticated or refined as a Patek Philippe is expected to be.

While the dial echoes watches of the mid-twentieth century, the case seems to have come from two decades earlier, and is by far the most impressive feature of the watch. The beautifully detailed stepped lugs are distinctly Art Deco, in strong geometric shapes that bring to mind the Chrysler Building. As with many of Patek Philippe’s contemporary offerings, the Multi-Scale Chronograph has an impressively made watch case. It is well made and carefully constructed, with each lug being screwed into the case band from the inside, allowing them to be removed for refinishing.

At 40 mm in diameter the ref. 5975 is moderately sized and more notably, slim, at just 10.25 mm high.  Like the rest of the 175th anniversary collection the Multi-Scale Chronograph has a solid, snap-on case back, one reason for its slimness. A solid back is unusual for a modern Patek Philippe, but not necessarily a bad thing. The movement inside is not the lovely CH 29 movement Patek Philippe uses in its best chronographs like the ref. 5271, but instead the self-winding CH 28 found in the more ordinary watches like the Nautilus Travel Time and ref. 5960/1A.

This has all the bells and whistles of a modern chronograph movement – vertical clutch, column wheel, patented teeth profiles – but it lacks the romance and charm of an old school chronograph calibre like the CH 29. And not to mention the fact that the CH 29 is appreciably better finished than the CH 28. But the upside of the less refined movement is a more affordable price. The ref. 5975 starts at 53,000 Swiss francs in yellow gold, and rising to 78,000 francs for the platinum model. That is about half what the entry level watch with the CH 29 movement costs.

The ref. 5975 is available in four metals as follows: The ref. 4675, the ladies’ version of the Multi-Scale Chronograph, is nearly identical, except smaller at 37 mm in diameter, a more feminine font for the dial, and diamond markers for the hours. Available in rose or white gold, the ref. 4675 is limited to 150 pieces in each metal and priced at 55,000 Swiss francs. The Multi-Scale Chronograph is arriving in stores right now.