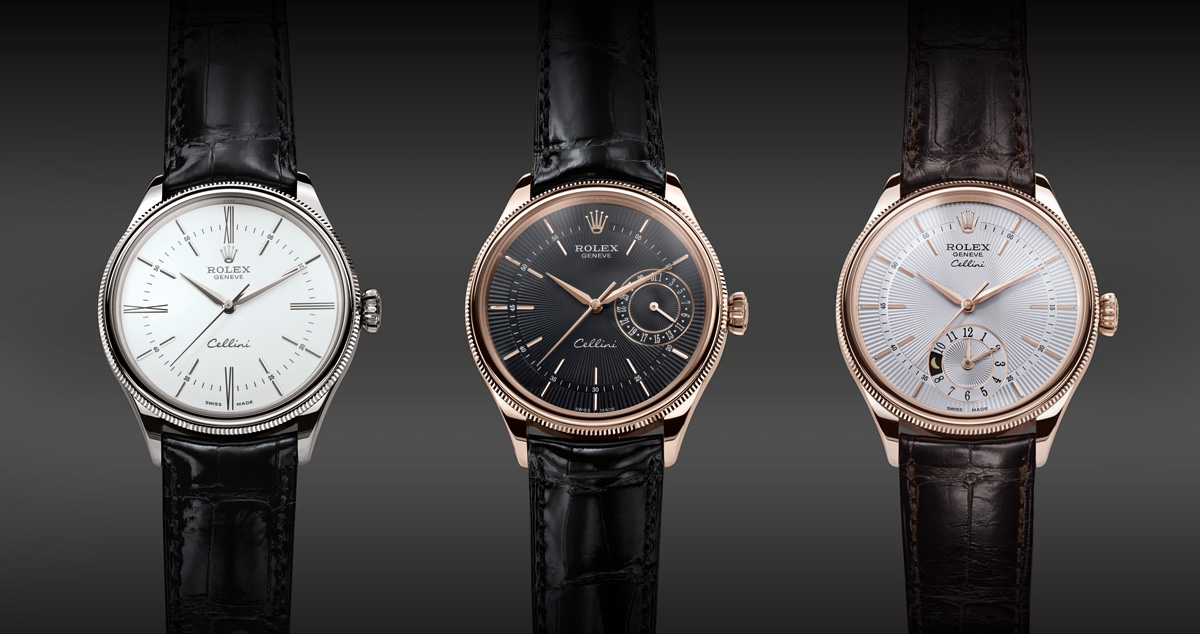 Conceived as a more formal wristwatch than the all conquering Rolex Oyster, the diverse and perhaps confusing Cellini has been in existence for as long as anyone can remember, but never did catch on. Baselworld 2014 sees the unveiling a new Cellini line, featuring classical but distinctive designs as well as several new movements.

Three models form the new Cellini collection, a time-only automatic, an automatic with date, and a second time zone with day and night function. They share the same case, available only in white or Everose gold, with a diameter of 39 mm. While its Rolex origins are not immediately apparent, the Cellini features several details synonymous with Rolex. It has an onion-shaped crown, as well as a domed case back with the signature Rolex fluted rim to screw it down.

Interestingly, the double-level bezel combines the two most common bezel styles of the Datejust, with a lower fluted portion (which echoes the case back fluting) and a domed upper ring. The base model of the new line is the Cellini Time, which has a black or white lacquered dial with elongated Roman numerals, and applied baton indices that are bisected by the minute track. Inside is an automatic Rolex movement with the non-magnetic blue Parachrom hairspring and a 40 hour power reserve. That is followed by the Cellini Date. In black or white, the dial is decorated with rayon flammé de la gloire guilloche, a sunburst motif. Unusually for a Rolex it has a sub-dial at three o’clock for the date. And the last model is the Cellini Dual Time. Like the Cellini Date this has a rayon flammé de la gloire guilloche dial available in white or black. The Cellini Dual Time has a second time zone as well as a home time display in the sub-dial at six o’clock. A tiny window at the 45 minute mark of the sub-dial indicates day or night. The local time hour hand is adjustable in one hour increments via the crown. Pricing has yet to be announced but the estimated retail price will range from about US$18,000 for the Cellini Time to US$23,000 for the Dual Time.