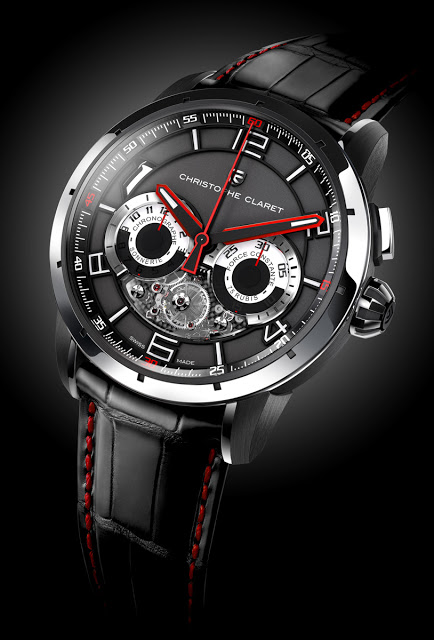 Christophe Claret continues to develop its own line of timepieces with the unveiling of the Kantharos, a monopusher chronograph equipped with a constant force mechanism, as well as a gong that chimes when the stopwatch is used. Christophe Claret was once the go-to guy for complicated movements like minute repeaters, but as the number of movement specialists have multiplied and brands move development in-house, Christophe Claret has begun to concentrate on retailing watches under its own brand name. The latest is the Kantharos, an elaborate chronograph made in-house by Claret. While the Kantharos is technically interesting, it seems to be a hodge podge of unrelated functions. As with some of the chronograph movements Claret has made before, the automatic cal. MBA13 inside the Kantharos is equipped with a striking mechanism linked to the chronograph. It has one cathedral gong – about one and a half times as long as the movement perimeter – and one hammer visible on the dial at ten o’clock. This chimes each time the chronograph starts, stops or is reset.

Named after a prize winning race horse, the Kantharos is also equipped with a constant force mechanism, which can be seen on the dial beneath a sapphire bridge. But given this watch has a vertical clutch mechanism for the chronograph, there is minimal loss of amplitude when the chronograph is engaged, which makes the constant force escapement seem unnecessary. Both chronograph counters feature fixed sapphire discs etched with numerals, with the elapsed time is indicated by rotating discs with a red index underneath. The Kantharos has a 45 mm case, in either titanium or titanium and gold. The basic version in titanium starts at CHF96,000, exclusive of tax.  – SJX