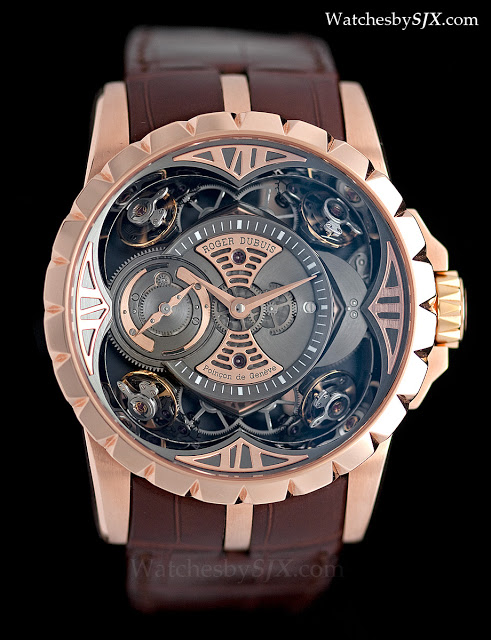 Though not the only multi-escapement watch presented at SIHH 2013, the other was the Greubel Forsey Double Balancier 35°, the Roger Dubuis Excalibur Quatuor certainly takes the idea to much further. Even though this is not for everyone, the Quatuor demonstrates some much needed inventiveness at RD in the post-Carlos Dias era.

Inclined at 45 degrees to better compensate for the effects of gravity, the balance wheels work in pairs, thanks to the differentials linking each pair, to average out positional errors in rate. And then the resulting rate from each pair of balance wheels is further averaged out between the two pairs. This double averaging leads to superior chronometric performance in all positions, according to RD. More is not necessarily better, but nevertheless the Quatuor is an intriguing watch. Movement aside, it is visually striking not only because of the four oscillating balance wheels, but thanks to its large 48 mm case. And the polished and notched bezel makes it look even larger than it is. The cal. RD101 movement has a pleasing, symmetric layout, with a pair of elegantly shaped winding click springs. Though not very evident due to the dark finish of the bridges and plate, the decoration is well done, especially the tightly but evenly spaced perlage. Like all RD calibres, this has the Geneva Seal. Aside from the four balance wheels, the Quatuor also has an unusual power reserve. Both the hand and disc of the sub-dial turn, and working similarly to the Patek Philippe Nautilus ref. 3710. 88 pieces of the Quatuor will be made in rose gold, with a price of CHF380,000, or about USD407,000. Three more specimens of the Quatuor will be made, at the price of CHF1 million each.  The reason for the astronomical premium is the silicon case, which is a world first (and also an all expenses paid trip to the factory to pick up the watch). The rationale for using silicon as a case material, aside from sheer novelty, is a weak case at best – no pun intended. – SJX