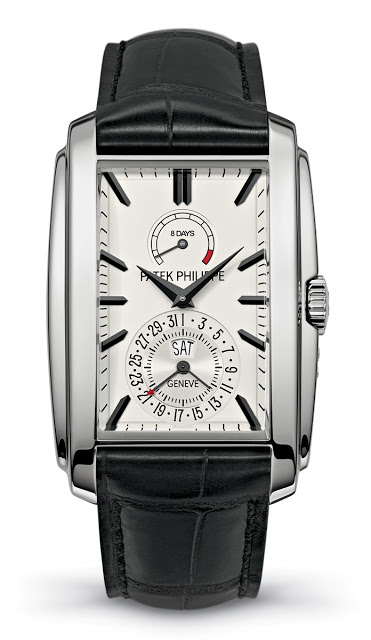 At Baselworld 2013 Patek Philippe had a relatively quiet year – with speculation being that 2014 will be a year of major new products since it is the 175th anniversary of the company. Patek Philippe presented one new movement, the caliber 28-20 REC 8J PS IRM C J, a form movement with eight days power reserve, thanks to twin barrels, along with day and date indicator.  Located at six o’clock on a single sub-dial, the day and date display are both instantaneous, switching within three milliseconds at midnight. And at 12 o’clock is the power reserve display. In addition the movement has silicon escape wheel and pallet fork (which Patek calls Silinvar), and also a silicon hairspring (Spiromax in Patek speak). These are derived from the silicon components pioneered in the Advanced Research series which culminated in the ref. 5550P in 2011. A notable detail of the movement is the “trompe l’oeuil” going train bridge, which seems to be three separate cocks but is actually a single bridge. The calibre naturally bears a lot of resemblance to that of the ref. 5100 10-Days “Manta Ray” limited edition made in the year 2000. Patek says the new ref. 5200 contains an entirely new movement, but I would not be surprised if something was carried over from the ref. 5100. Available only in white gold for now, the ref. 5200G measures 46.9. mm long and 32.4 mm wide. Two dials are available, a metallic blue or a silvery white.  – SJX