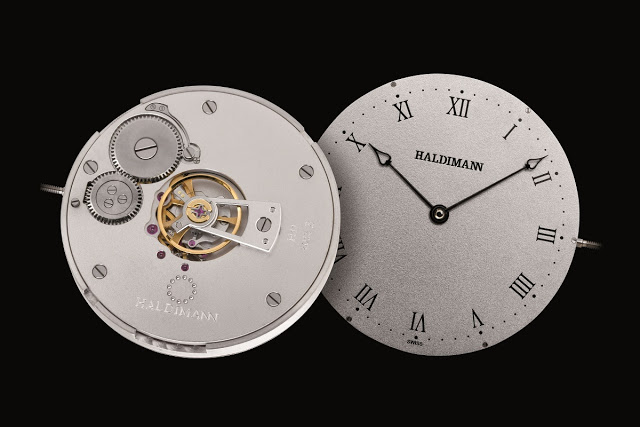 Beat Haldimann introduces his first watch without a tourbillon at Baselworld 2013, the H11 Central Balance Pure. This has the balance wheel at the centre of the movement, below the hands. Best known for his central flying tourbillons, Beat Haldimann recently unveiled his first wristwatch without a tourbillon. The H11 Central Balance Pure is unusual because it has the balance wheel in the centre of the movement, which means the balance wheel sits directly below the hour and minute hands. And the balance wheel is suspended above the main plate of the movement by a balance cock, with the escape wheel and lever below, followed by the gear train. The only other components visible on the main plate are the ratchet wheels for the barrel. Beat Haldimann makes almost the whole movement himself, just like for his tourbillon watches. With the H11 one can see how the concept is similar to the central tourbillons Haldimann makes, in which the tourbillon carriage rotates on the same axis as the hands. Though it has an elegant and novel movement layout, I find it slightly underwhelming. The 39 mm case is platinum and the retail price is CHF56,000 including 8% Swiss VAT, which works out to about USD60,000. – SJX