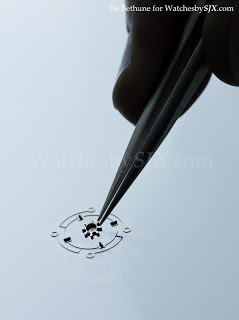 De Bethune recently announced a prototype of a regulator running at 926 Hz, or 6.6 million bph, which it terms the “Résonique”. The brand is already accomplished in creating exotic in-house escapements, like the 36,000 bph silicon tourbillon in the DB28T, originally seen on the Dream Watch 3.

According to De Bethune the Resonique has no balance wheel or hairspring, and instead “is based on the successful synchronisation between an acoustic resonator and a magnetic escapement rotor within a mechanical watch”. I have very little idea of what that means exactly.

That, however, does remind me of the TAG Heuer Pendulum with its magnetic balance. Incidentally the TAG Heuer Mikrotimer 1/1000th chronograph has a second balance wheel that beats at 3.6 million bph, but it is still similar to a traditional escapement.