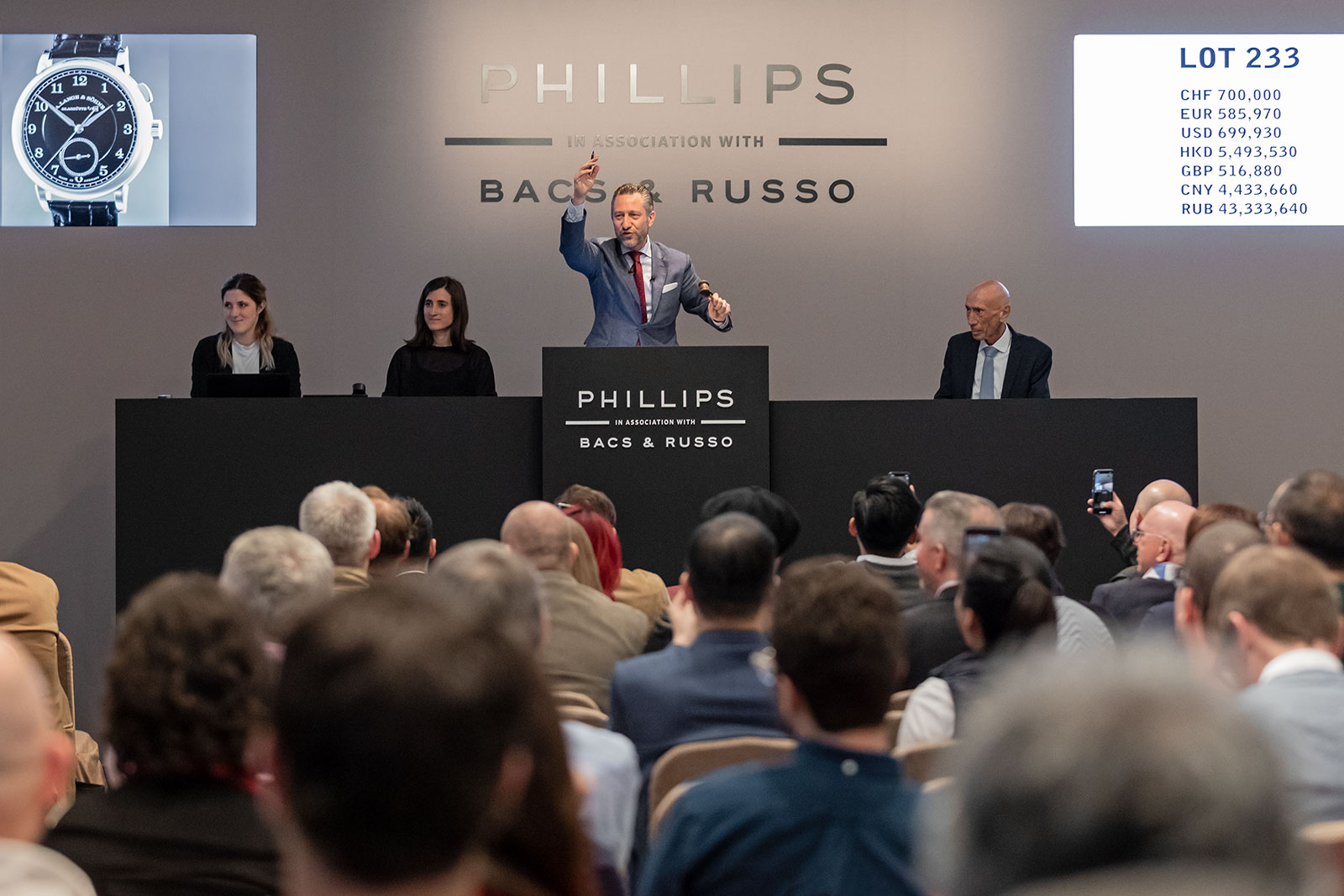 A strongly growing market ignored by most brands – at least until recently – the secondary market for luxury watches is now the hot topic, especially in light of the recent announcement by Rolex that it will be starting its own certified pre-owned programme. We have just published our first report on this segment of the watch market, where we detail not just the increasing economic importance of the secondary market in the value chain of the watch industry, but its major impact on the brand equity – for better or worse.

Even though the secondary market is about half the size of the primary market, it has been growing much faster. The Swiss watch industry and the handful of luxury watchmakers outside Switzerland achieved a record year in 2022. We estimate the business had a retail value of CHF52 billion in 2022, up 12% from CHF46.3 billion in 2021.

As a comparison, the secondary market grew by 40% in the first half of 2022 and 20% for the entire year. The growth rate assumed for our forecast is triple that of primary market, which we estimate will be 4%, consistent with the historical CAGR for the primary market from 2000 to 2019. 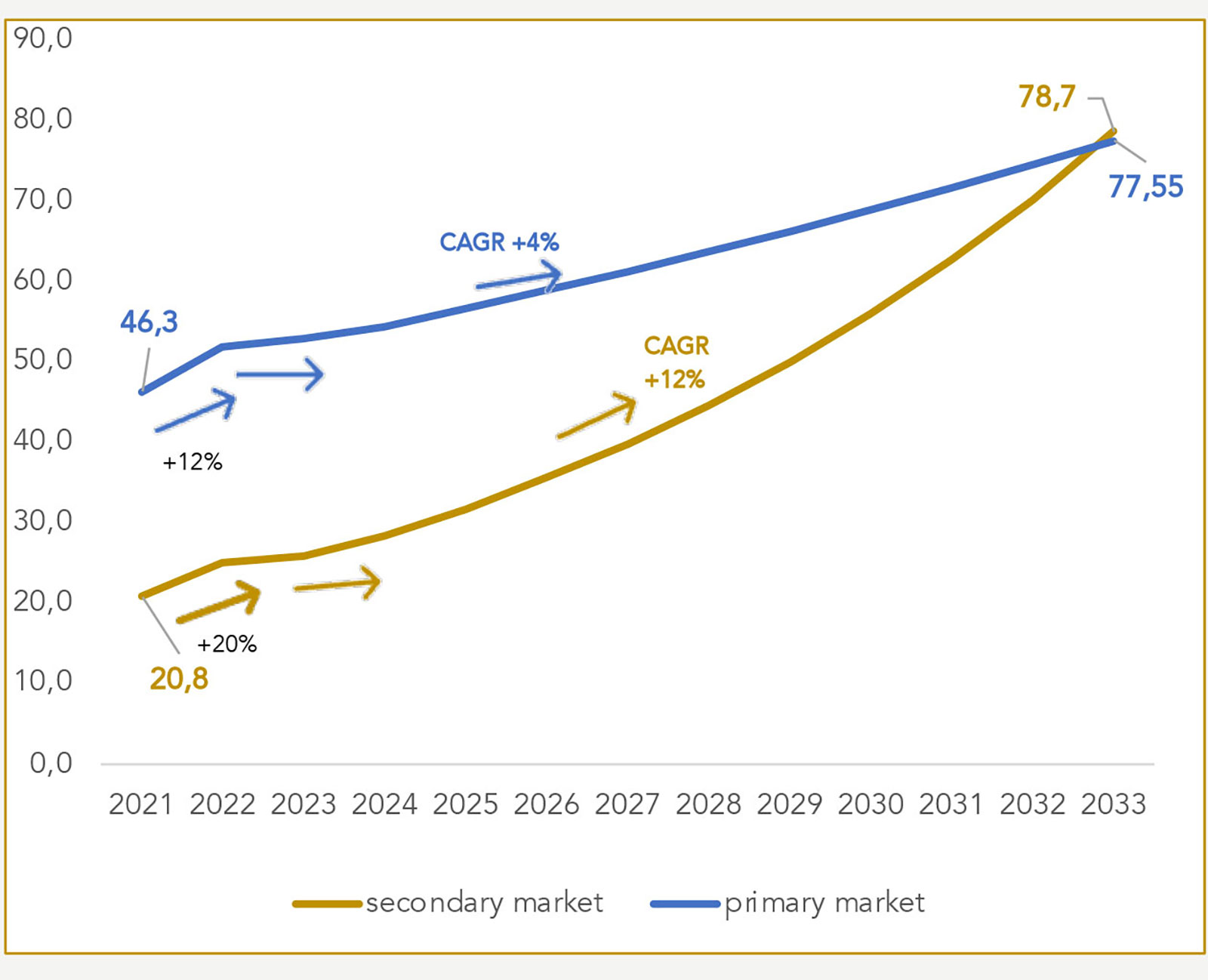 The projected size of the primary and secondary markets for luxury watches. Source: LuxeConsult (This chart cannot be reproduced without LuxeConsult’s express authorisation)

A market totally ignored by watch brands until recently, the secondary market accelerated in 2018 when clients who were frustrated by the growing waiting lists for new watches started to explore pre-owned alternatives. This was driven in large part by the strained primary market for “champion” brands – namely Rolex, Patek Philippe, Audemars Piguet – where their most iconic models have long enjoyed excess demand, leading to a booming secondary market where prices exploded and reached stratospheric levels.

The pandemic turbocharged this. The fortunes minted by cryptocurrencies were a constant fuel for growth in secondary-market values, at least until the end of 2021. This spike in prices were regarded by many as unsustainable.

In November 2021, Morgan Stanley published a report titled Swiss Watches as a Play on Crypto Wealth that estimated if only 0.5% of the gains made in cryptocurrencies were “invested” in luxury watches, it would lead to an incremental demand of €10 billion, which would disrupt the entire market for watches, then €42 billion at primary level and another € 20.8 billion at secondary level.

As we all know the crypto bubble burst, leading to some well-known watch models suffering big hits on the secondary markets starting in April 2022. The iconic watches that had enjoyed the most hype during the preceding two years suffered the biggest depreciation.

But to put things into perspective. The current Rolex Daytona in steel, for instance, still sells for almost twice its retail price on the secondary market. As a result, the increase in the Daytona’s secondary market value over the last five years is still impressive.

More broadly, watches have proved to be more resilient than most other asset classes in the recent downturn, including equities  and crypto. Last but not least, Gen Z consumer are still entering the market, with many of them beginning to see watches as an asset class, further giving the market legs. 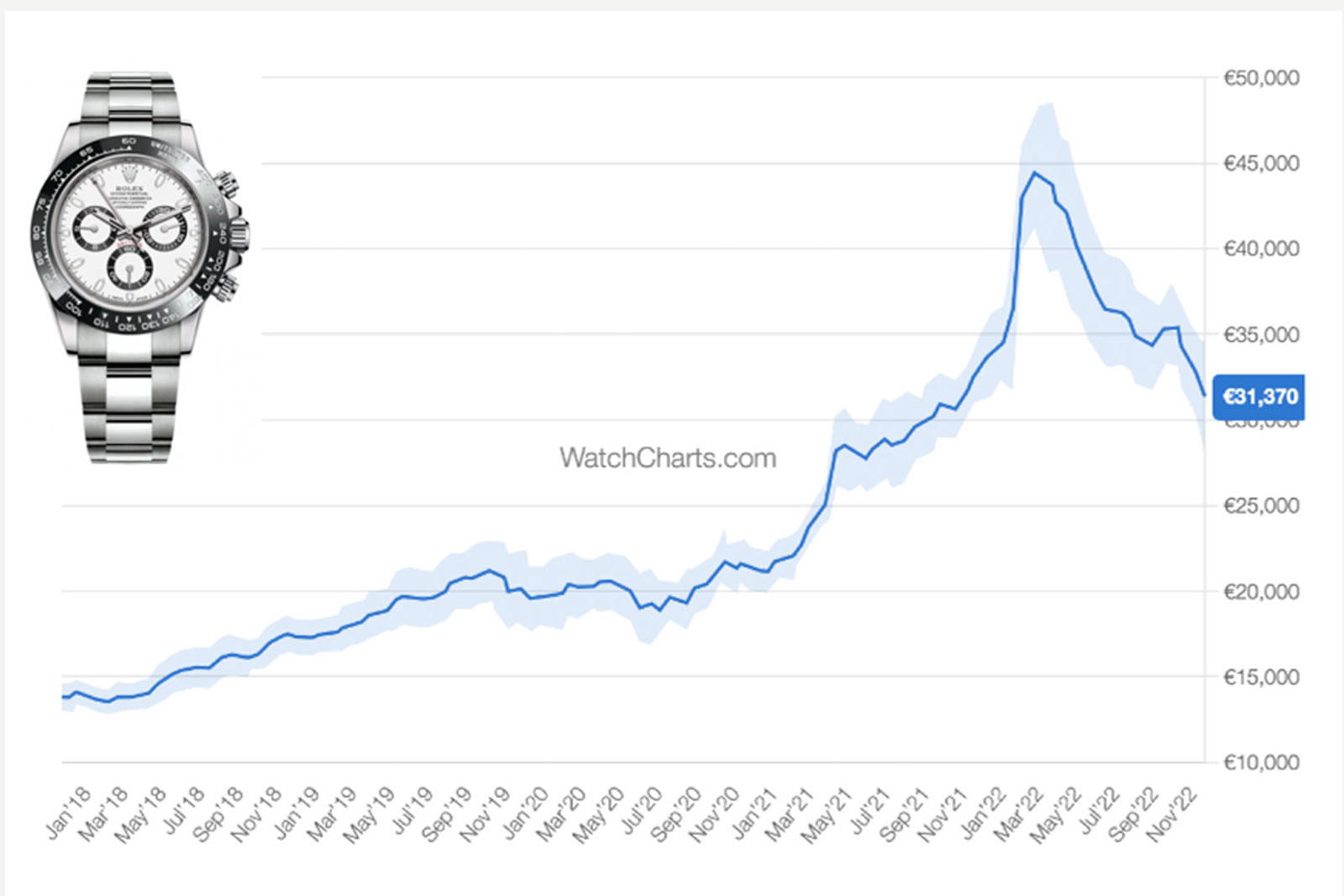 As explained in the annual report on the watch industry published by Morgan Stanley and LuxeConsult, the primary market is extremely polarised: only five brands account for 53% of total luxury watch sales.

But the secondary market is even more polarised, with just three brands making up 55% of total sales on the secondary market, namely Patek Philippe, Audemars Piguet, and Rolex. The respective “grail” watches from each brand, like the Submariner, Nautilus, and the Royal Oak, are often the ultimate trophy for consumers driven by passion or speculation.

Pre-owned but not always used

A sub-segment of the secondary market is the grey market, where brand-new watches are sold by non-authorised retailers. Even though watch brands usually studiously ignore the grey market, at least in public, it is a reality they can’t ignore. Historically, it was a channel for brands to get rid of inventory that was not moving.

The grey market was one where most watches, including brands like Rolex, traded at a discount to retail, until about 10 years ago. But today the market has evolved into one where substantial premiums are being paid for the hottest models, in order to get around waiting lists that can stretch into years (for instance, the waiting list for the Patek Philippe ref. 5711/1A prior to its discontinuation in 2021 was reputedly 12 years).

Today the grey market is estimated to account for 25% of the secondary watch market value, equivalent to about CHF6.3 billion in annual sales. We estimate that 80% of that value are watches that are recent models that are brand new and unworn, but are being sold outside of official retail channels by dealers and speculators. 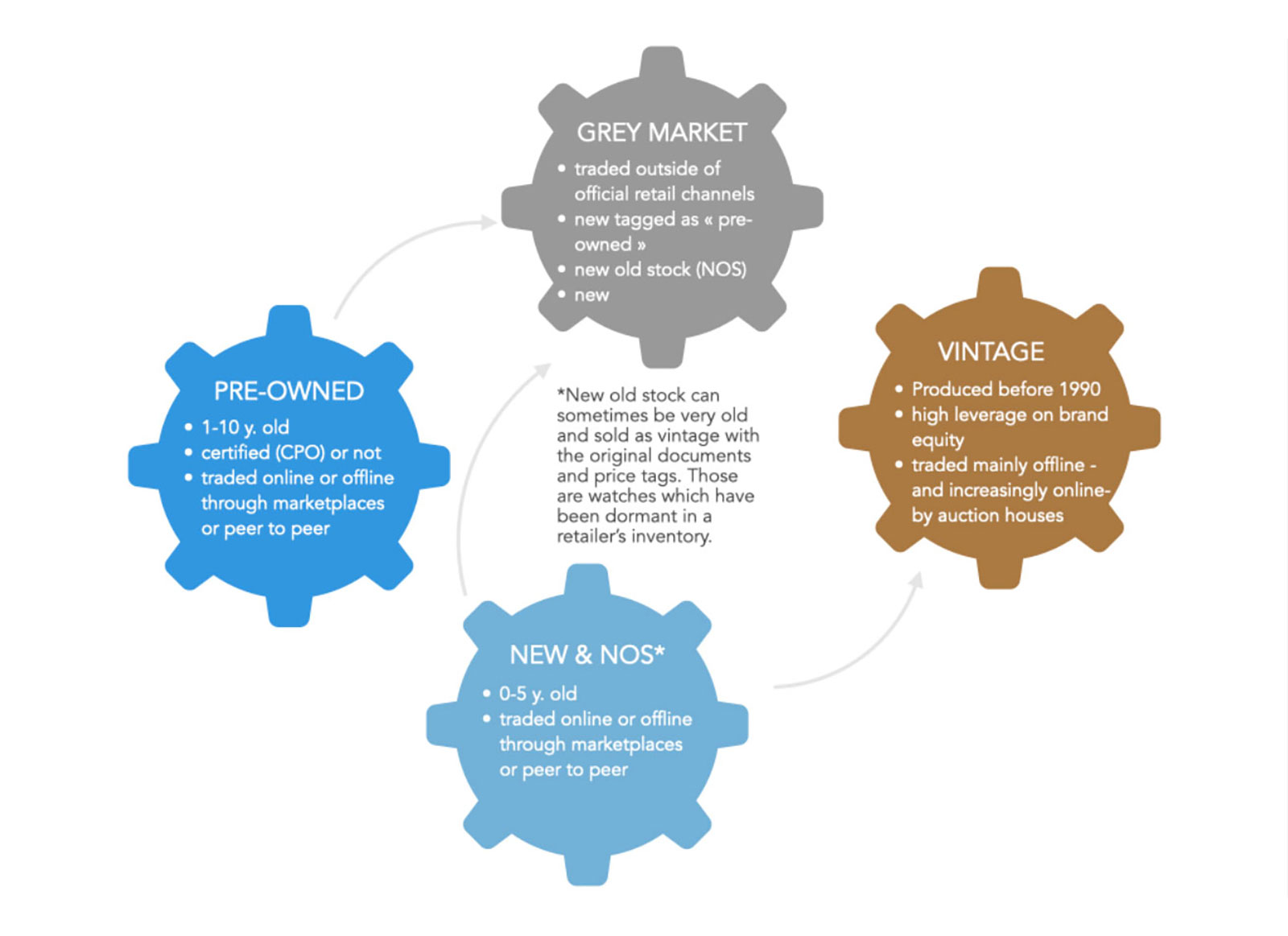 The segments of the secondary market. Source: LuxeConsult (This chart cannot be reproduced without LuxeConsult’s express authorisation)

As watch brands often claim in their marketing, luxury watches are heirlooms meant to be handed from one generation to another. They are a physical manifestation of the consumer’s bond with the brand, representing the brand values of longevity and sometimes even value retention or appreciation.

By now, watch brands have mostly understood that their relationship with clients doesn’t end with the sale of a new watch and the servicing of such timepieces. The second life of a watch is at least as important as its tenure with its original owner.  Watch brands arguably need to take as much care of the subsequent owners of watches, right now and not only after decades when watches become “vintage” and museum-worthy.

The secondary market is the best indicator of the brand’s desirability. It is a reliable signal of the actual value a consumer assigns to a watch, even if the value is sometimes wholly irrational.

The full report on the secondary market, which is over 80 pages can be ordered at Luxeconsult.ch. It costs CHF3,990 for a single-user license and CHF 14,990 for an enterprise license.