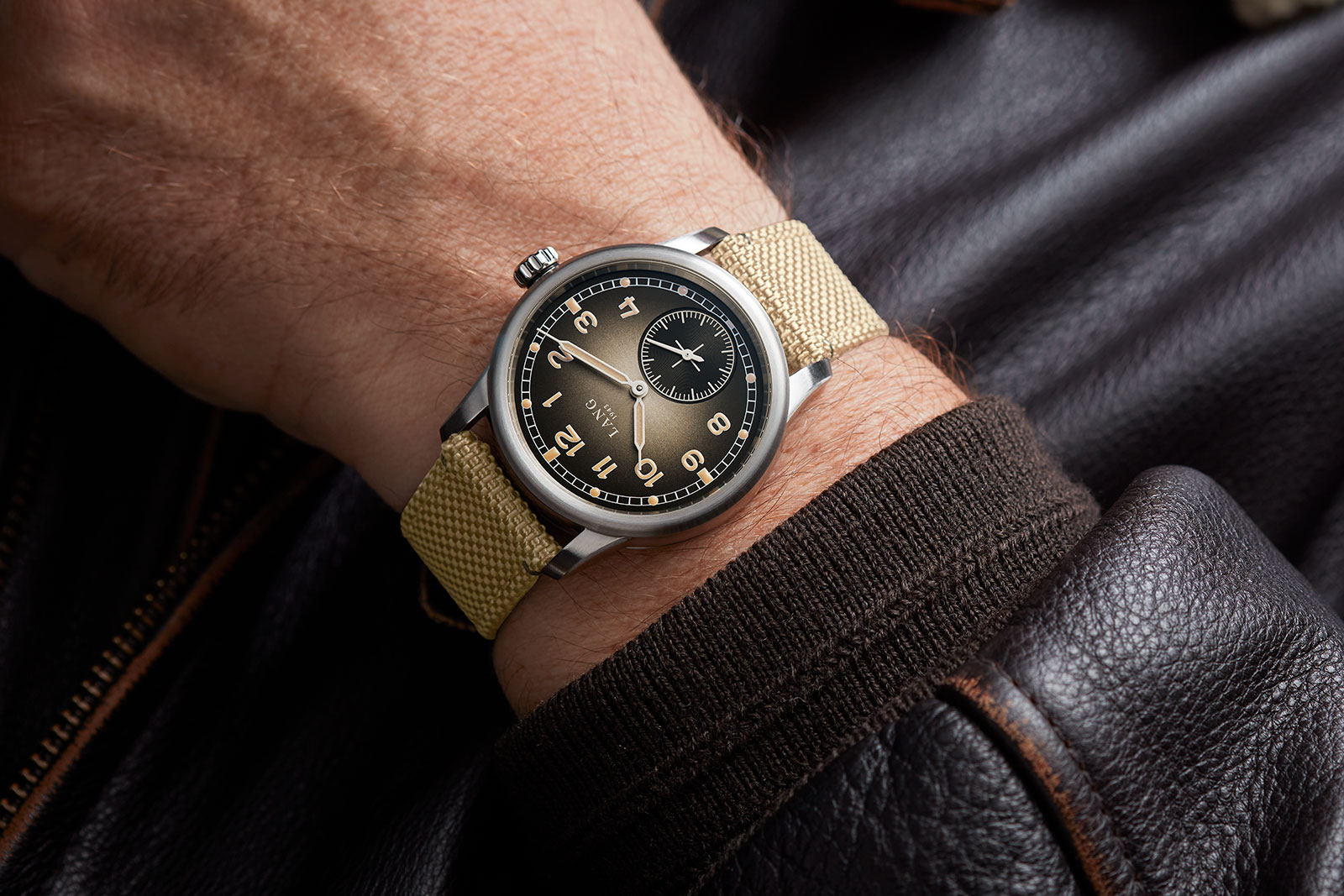 Once synonymous with Chronoswiss which he founded in 1983, Gerd-Rüdiger Lang is now almost 80 but returns with an all-new brand, Lang 1943. Created in partnership with entrepreneur Georg Bartkowiak, the brand’s inaugural watch is the Lang 1943 Field Watch Edition One. Modelled on the wristwatches issued by the British army during the Second World War, the Field Watch is a modern watch with a vintage flavour that’s powered by a restored 1960s movement.

A military-inspired time-only watch is not a novel concept, and the Field Watch sticks to the traditional design, resulting in a watch that is recognisably similar to the Second World War watches made by the likes of Cyma, IWC, and Jaeger-LeCoultre. Lang 1943 isn’t the only brand offering such a watch at the moment; the revived Vertex brand has a similar offering with the M100A and it has the added advantage of being one of the original suppliers during the war.

But the Lang 1943 Field Watch is attractively detailed, which is likely due to its founders’ decades of experience, both as horological entrepreneurs and watch collectors. The smoked dial is appealing and sets this apart as a modern watch as oppose to an exact remake. Oddly enough the smoked finish does well with the faux-vintage Super-Luminova and together they give the dial a pleasing palette.

One detail worth pointing out is the crosshair on the subsidiary seconds, which was not found on the Second World War originals but is a perfect fit for the dial now. And the position of the seconds itself is noteworthy: it sits exactly on the edge of the dial, indicating the case is sized to fit the movement. 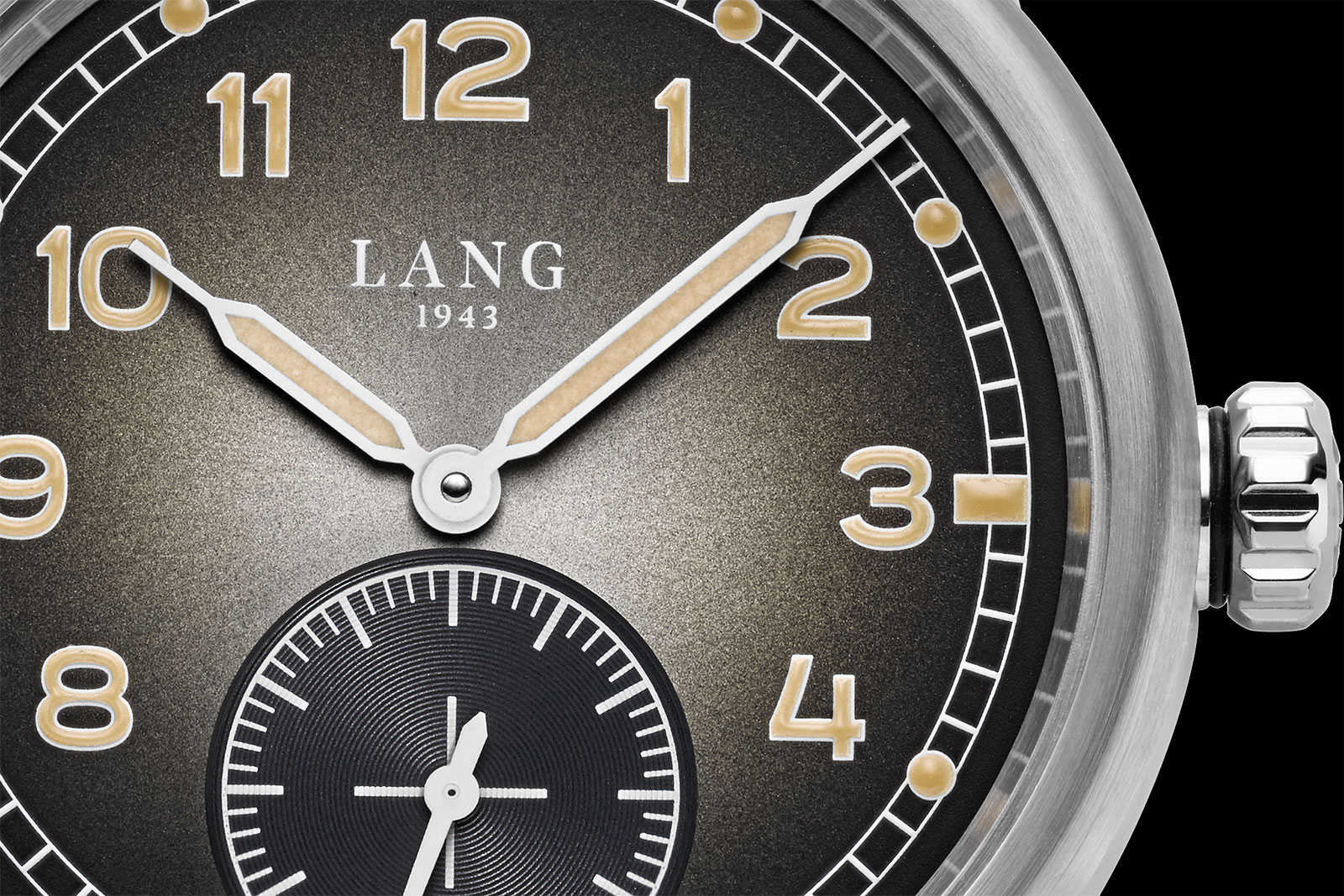 Beyond its aesthetics, the Field Watch does well in terms of mechanics. As he often did at Chronoswiss, Mr Lang once again turns to a vintage movement that’s been reworked and decorated. It’s a welcome change from the usual movements found in this price range, namely Sellita or ETA.

Even though modern calibres probably have better performance, the “new old stock” Marvin inside the Field Watch has more charm. And it helps that the movement has been decorated, albeit in an industrial manner, so it looks good through the display back.

Priced at about US$3,700, the Field Watch is pricier than most of the competition, but it stands apart for its vintage movement. That’s not really enough to make it outstanding value, but it is good enough.

Gerd-R. Lang was prominent in watchmaking in the 1980s and  1990s thanks to the success of his brand Chronoswiss, which was one of the first new brands established to capitalise on the renewed appreciation of mechanical watches after the Quartz Crisis. But the distinctive Chronoswiss in hindsight did not age well and because the brand never successfully evolved, it fell on hard times and Mr Lang was compelled to sell the brand in 2012. Despite its name the brand was historically based in Munich, though its new owners moved it to Switzerland after taking over.

Now Mr Lang is back as the figurehead and advisor to Lang 1943, which is named after him and his birth year. Like Chronoswiss before it, Lang 1943 favours a heavily retro style but it looks nothing like Chronoswiss. Instead the brand takes inspiration from the “field watches” issued by the British army to its infantrymen during the Second World War. 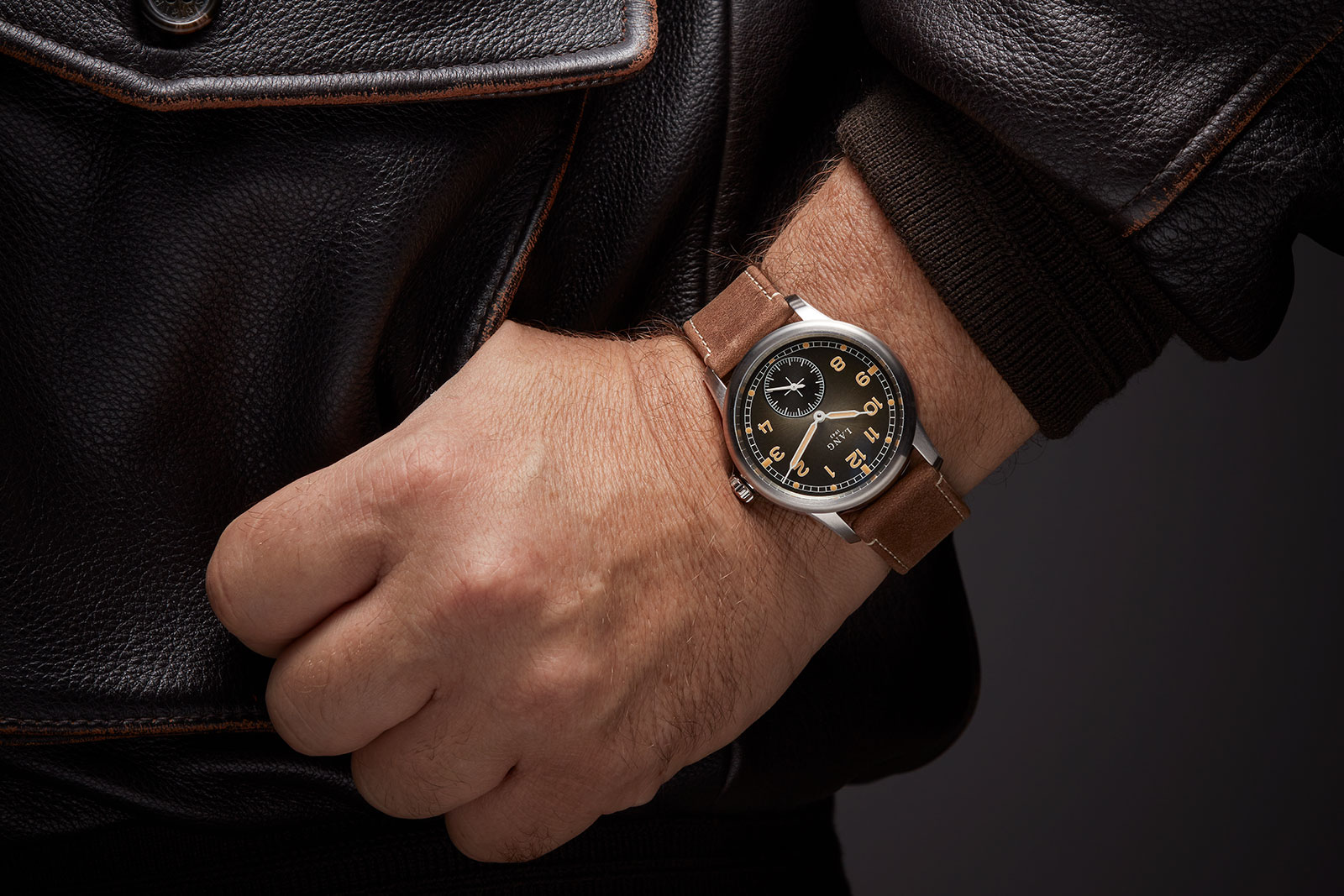 The Lang 1943 Field Watch has been given a modern makeover with a smoked, grained dial that has all the elements typical of the Second World War original, including syringe hands and a railway minute track.

The steel case is a well proportioned 39 mm by 8.4 mm, so it is thin and also perfectly suited to the size of the movement. As a result, the seconds sits in between the hands and edge of the dial, resulting in a well-balanced face. And in keeping with its military inspiration, the case has an entirely brushed finish on all surfaces. 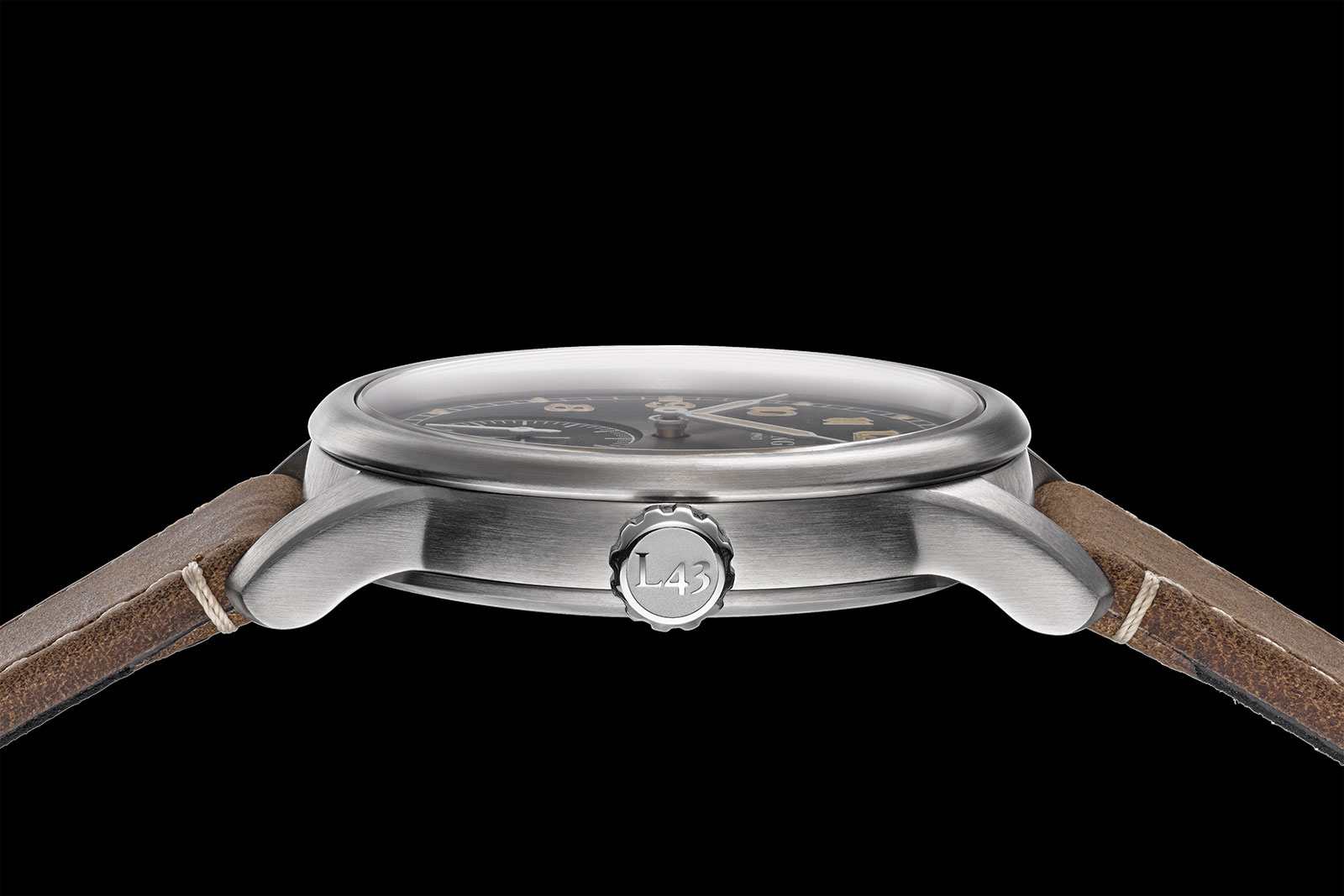 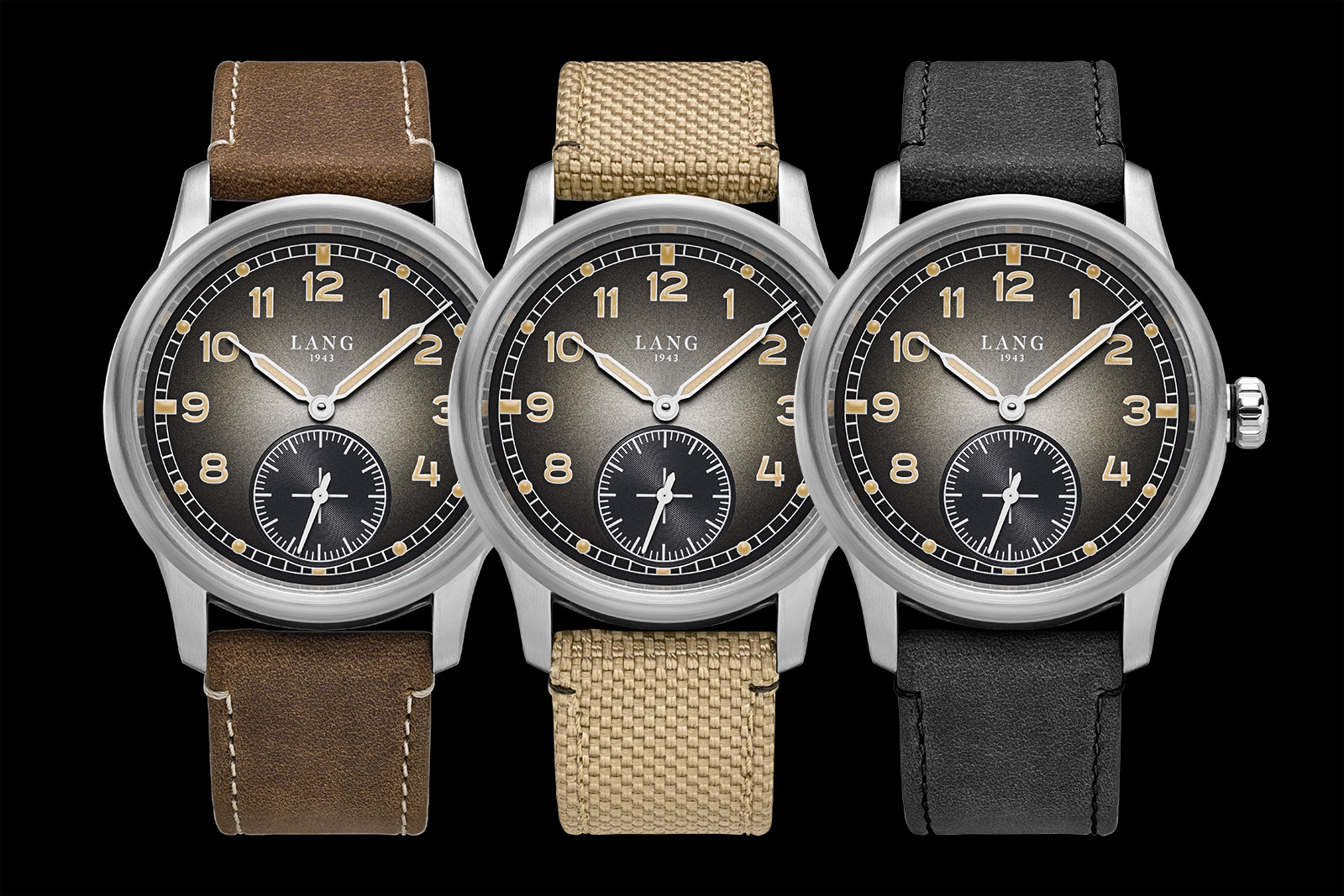 The movement inside is a Marvin cal. 700 from the 1960s, a robust, manual-wind movement that was fairly large for its era. Mr Lang acquired all of the inventory of the defunct Marvin company in the 1980s and also used the same calibre for Chronoswiss in the past.

Now it’s been installed in the Field Watch with an almost identical decoration, save for the branding on the going train bridge. The movement is good looking enough to justify the open back. The bridges are decorated with stripes and stamped bevelling, while the visible wheels have a radial graining. And the pivot jewels of the going train sit in gold chatons. 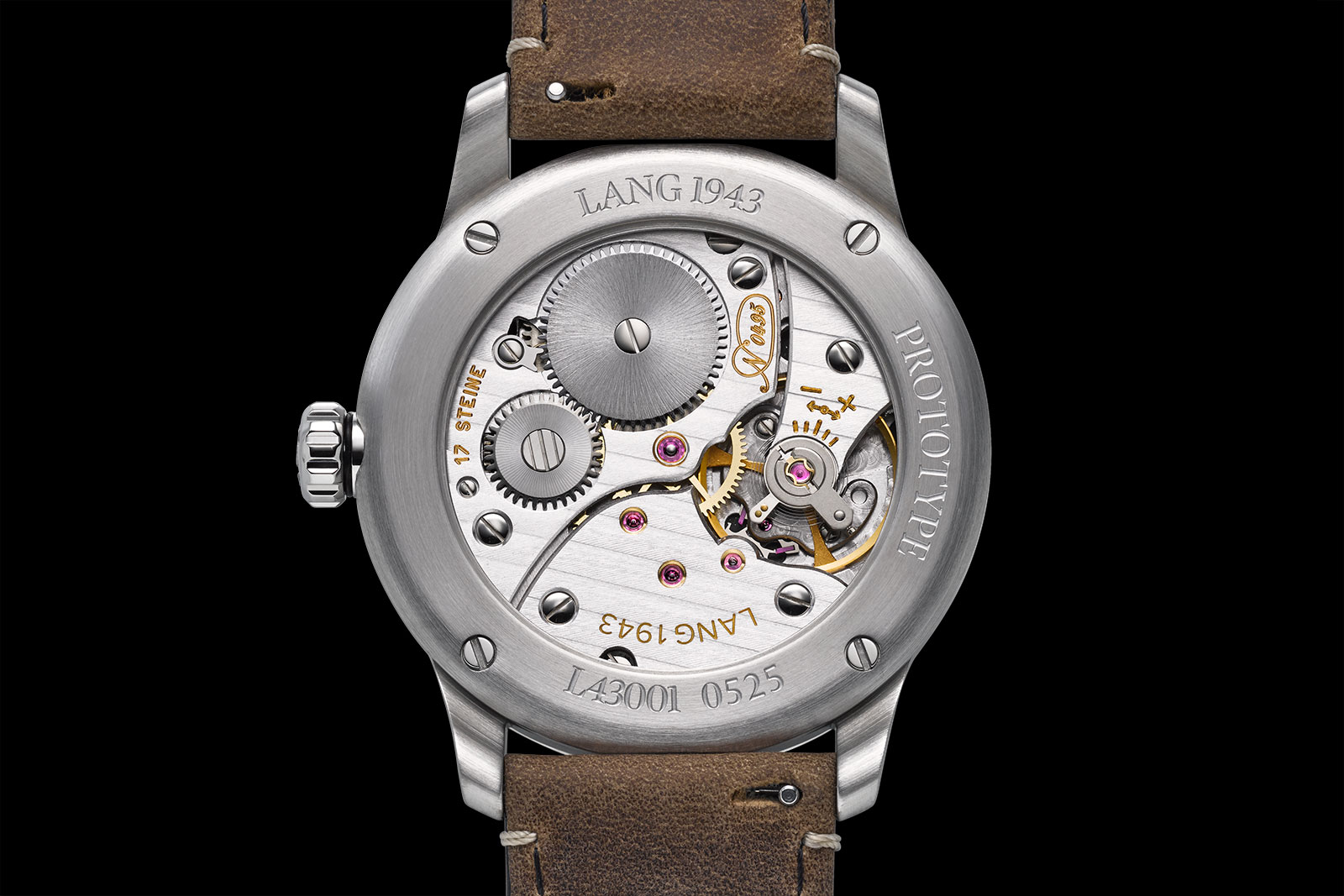 Limited edition: No
Availability: Direct from Lang 1943 or Perpetuel in Dubai
Price: US$3,660 excluding taxes