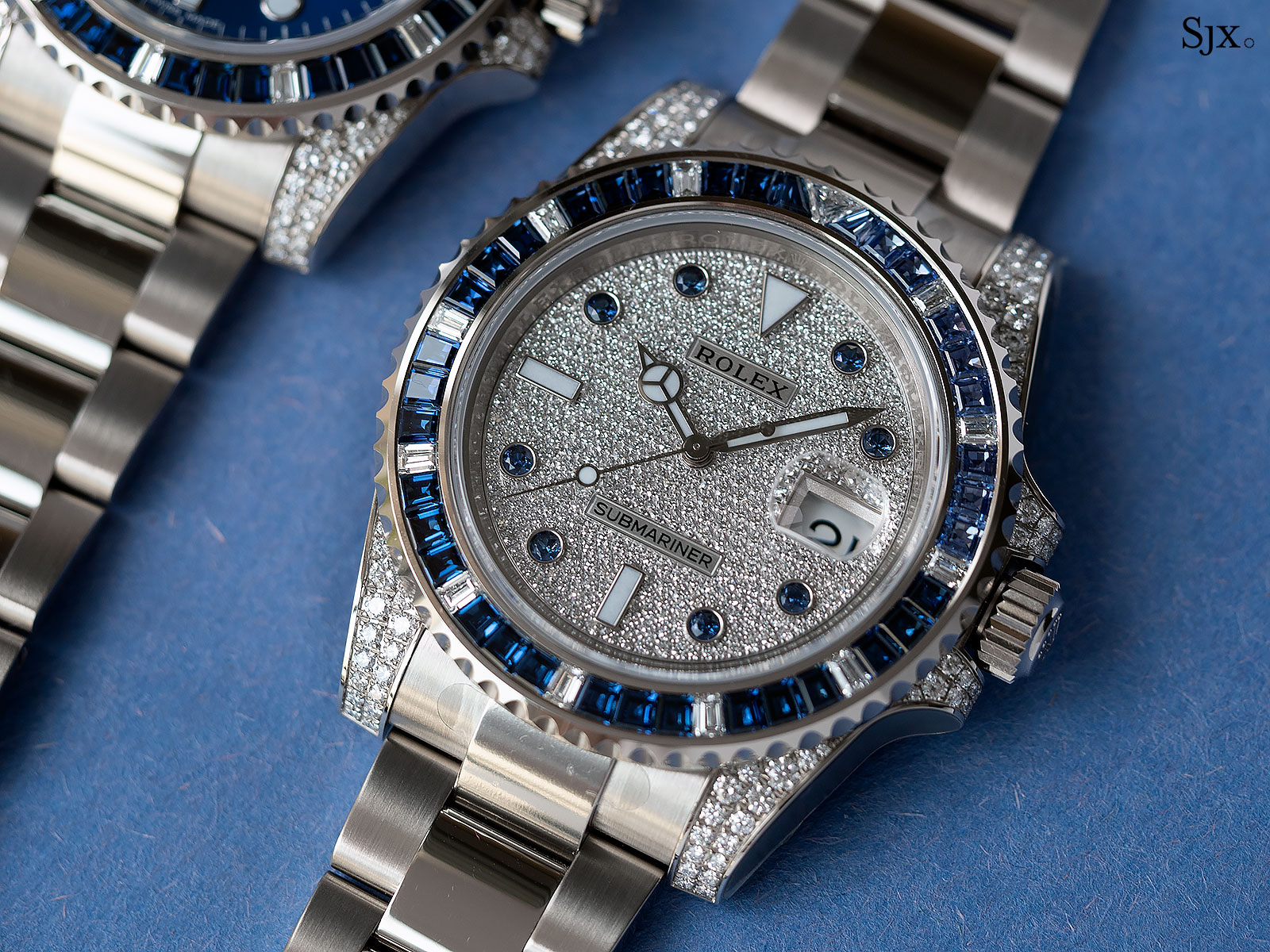 The most obvious benchmark of success for a watch brand are its financial results, but sometimes other indicators are more salient in determining its longevity, namely brand equity. Essentially how a brand is rated by its target audience, brand equity is especially important in key markets. Being desirable in a market as crucial as China, now the world’s second largest watch market after the United States, is a useful indicator of a brand’s future.

In a note published earlier this week – titled Rolex becomes the most desirable watch brand among Chinese HNWIs – the investment bank Morgan Stanley analysed the latest ranking of the top watch brands in China published annually by Hurun Report, a Chinese media outlet best known for its Hurun Rich List of the wealthiest people in China.

Published every year since 2010, the ranking is based on a survey of 750 Chinese consumers with an average age of 37 and an average net worth of RMB42 million (equivalent to about USD$6.6 million). While the sample size is narrow, it offers a useful insight into the development of consumer preferences in China. 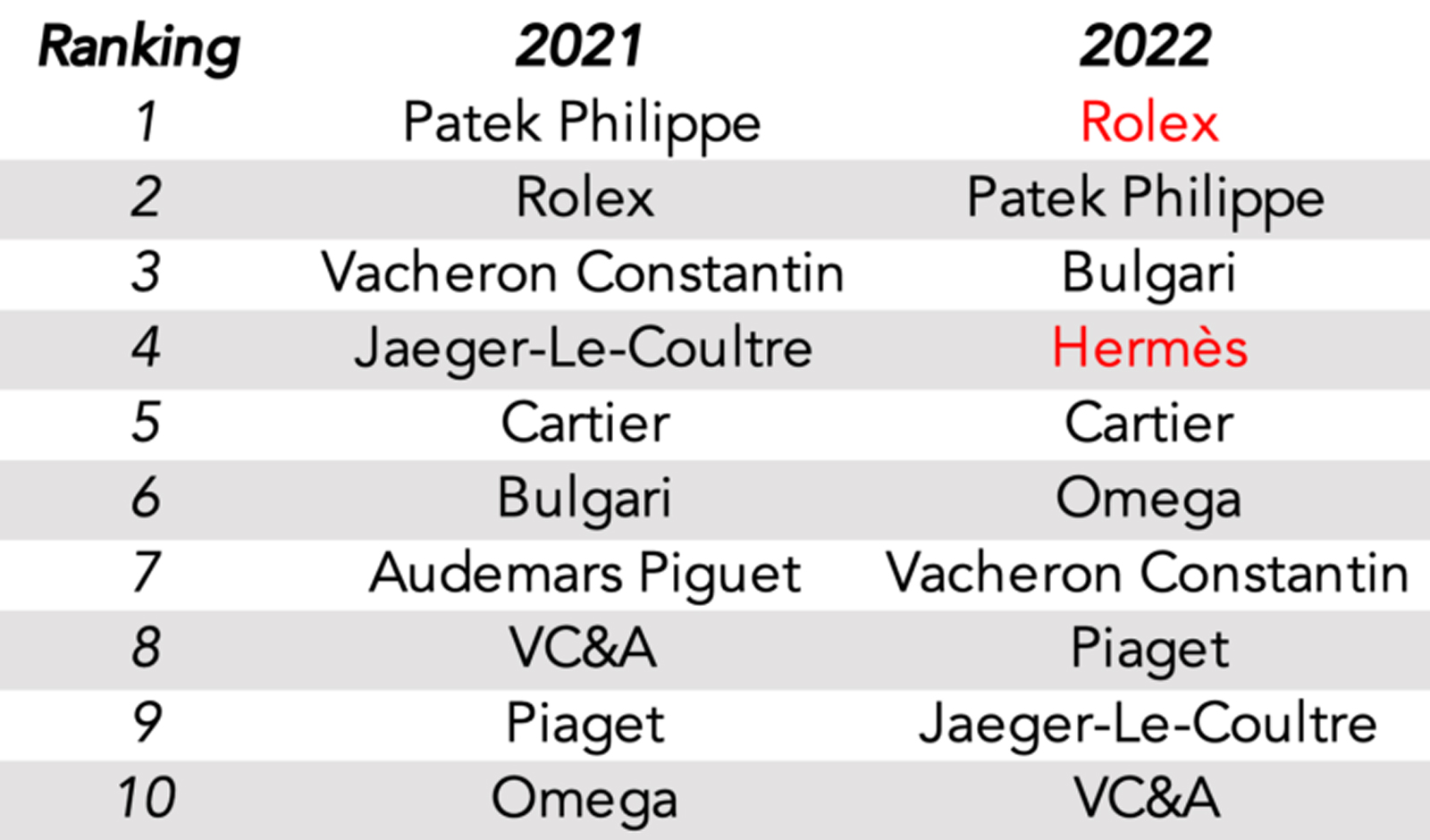 The most desirable watch brands in China. Source: Hurun Report

Who wears the crown where?

A few elements stand out in the ranking. First is the ascent of Rolex to the top spot, putting it ahead of Patek Philippe, which had an unbroken hold on the top spot since 2010.

Notably, Rolex leads the pack in terms of desirability, but isn’t the market leader in terms of sales, which is instead led by two brands owned by the Swatch Group, Omega and Longines. The former comes in sixth in the Hurun ranking, while Longines does not appear in the top ten. That, however, can be explained by the survey’s audience, which is the high-end segment of the market.

The Morgan Stanley report aptly notes that Rolex, which holds 25% of the Swiss watch market worldwide by value – putting it far ahead of Omega, which has second place with just 9% – is also the undisputed leader in the rest of the big watch markets. That includes the United States, now the biggest market for Swiss watches, and the United Kingdom, which ranks fifth globally. Rolex has more than 30% of the market in each country, a dominance that is unique in the luxury goods industry; no other luxury brand is so dominant in key markets.

Rolex, however, is much less dominant in China. According to Morgan Stanley, its market share is about 15%, lower than the market share of the Swatch Group as a whole with its stable of brands.

Amongst the brands owned by Swatch Group, Omega, Longines and Tissot have benefited the most from the early establishment of distribution in China, where the Swatch Group has been operating since the 1990s. In addition, Omega has a unique historical importance in China, with Chairman Mao having worn an Omega for decades. 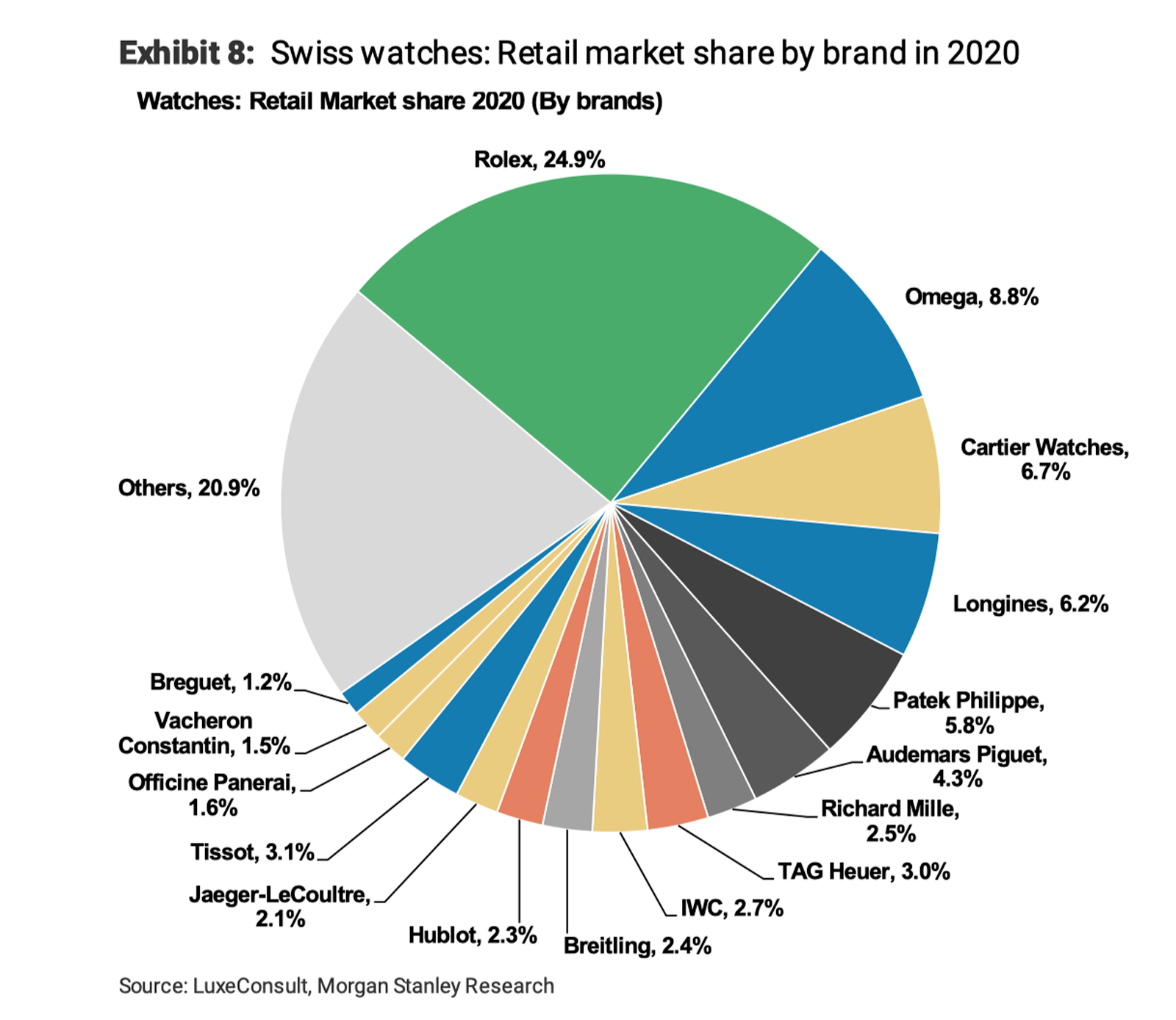 The second surprise in the Hurun ranking is the breakthrough of Hermès, which appears on the ranking for only the third time since 2010 and now rise to fourth position, placing it ahead of Cartier and Omega.

This climb is not due to chance, but the result of a long term effort by one of the most storied luxury houses, albeit one without a substantial historical presence in watchmaking. But Hermès has positioned its watch division in the manner of a brand with a long-term vision.

It has done so by reducing the number of models in the lineup, while boosting the range of timepieces equipped with mechanical movements. At the same time, Hermès has launched new watches that have the styling elements needed to become an iconic design, like the recent H08 for instance.

As a testament to its strength, the brand is now even able to sell good numbers of highly complicated watches like minute repeaters with tourbillons for several hundred thousand francs. 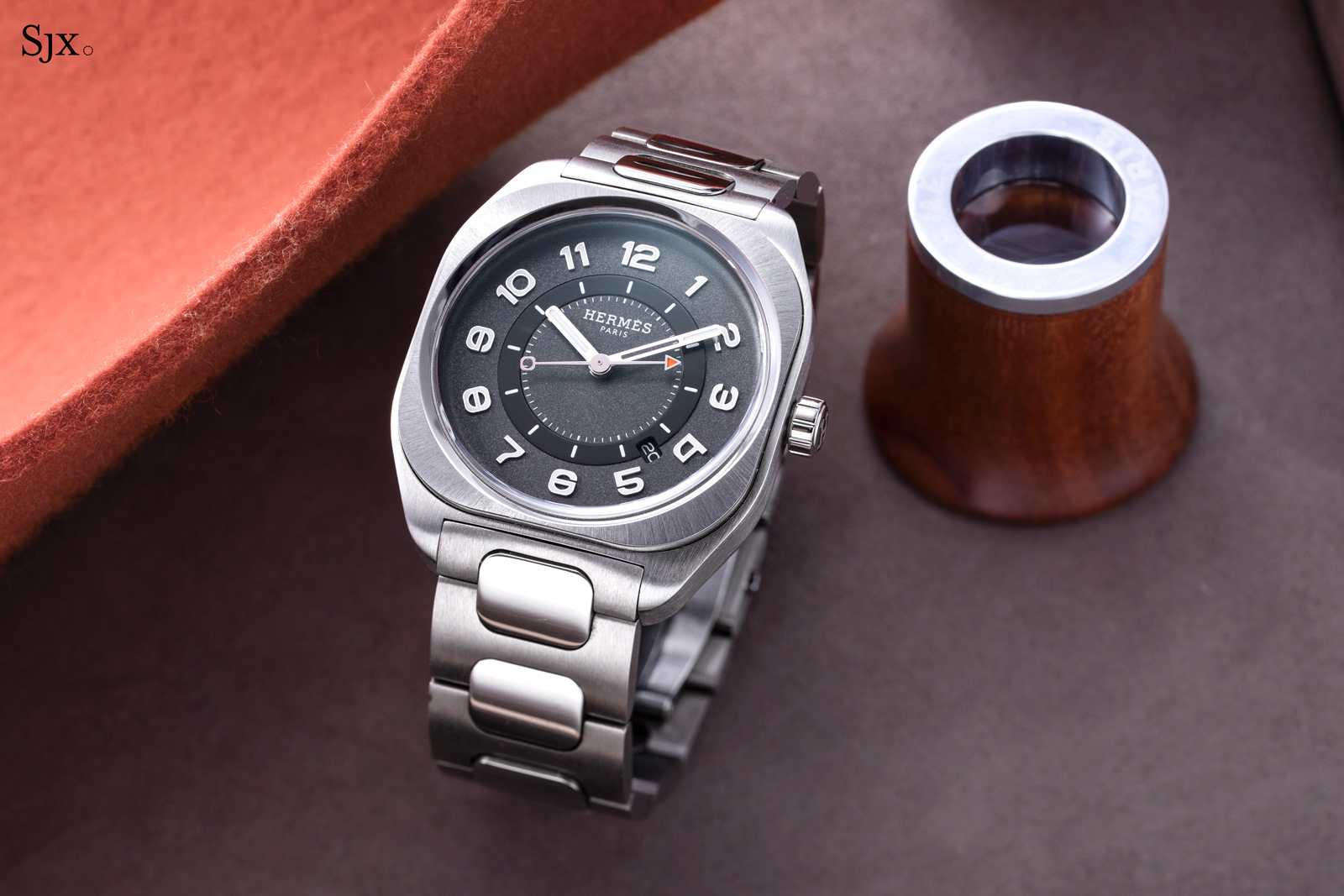 The third key finding is that Richemont owns five of the brands in the top ten – Cartier, Vacheron Constantin, Piaget, Jaeger-LeCoultre, and Van Cleef & Arpels.

The only downside for the Swiss group is the decline of Vacheron Constantin, which fell from third to seventh place, even though its specialty are the very products most prized by Chinese consumers, watches with a classical aesthetic and high levels of manufacturing know-how. Its decline can be explained in part by the influx of new clients who have bought into the brand thanks to the bestselling Overseas sports watch, which probably appeals customers who are not yet the sort of wealthy individuals surveyed by Hurun. 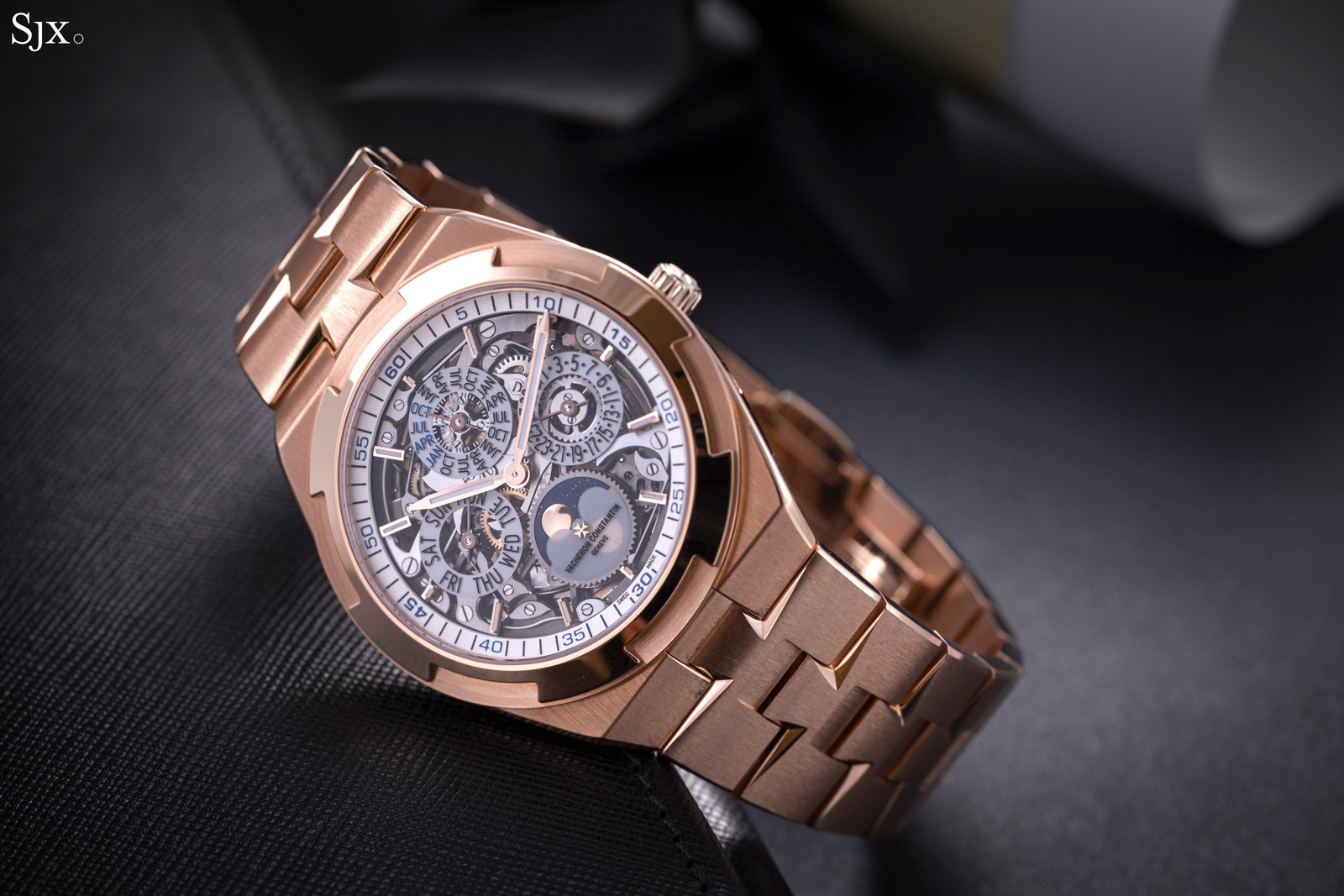 But the biggest surprise is the Audemars Piguet being missing from the top ten brands. For a marque that is always cited as one of the four top-performing brands, along with Rolex, Patek Philippe and Richard Mille, especially one that enjoyed a 38% uptick in sales last year, its absence is surprising to say the least.

Even if this ranking is only a snapshot of the tastes of a specific segment of the market, it is still a revealing snapshot of the efforts made by brands to cultivate an audience in the market with the highest expected growth in luxury-goods demand for the next decade.