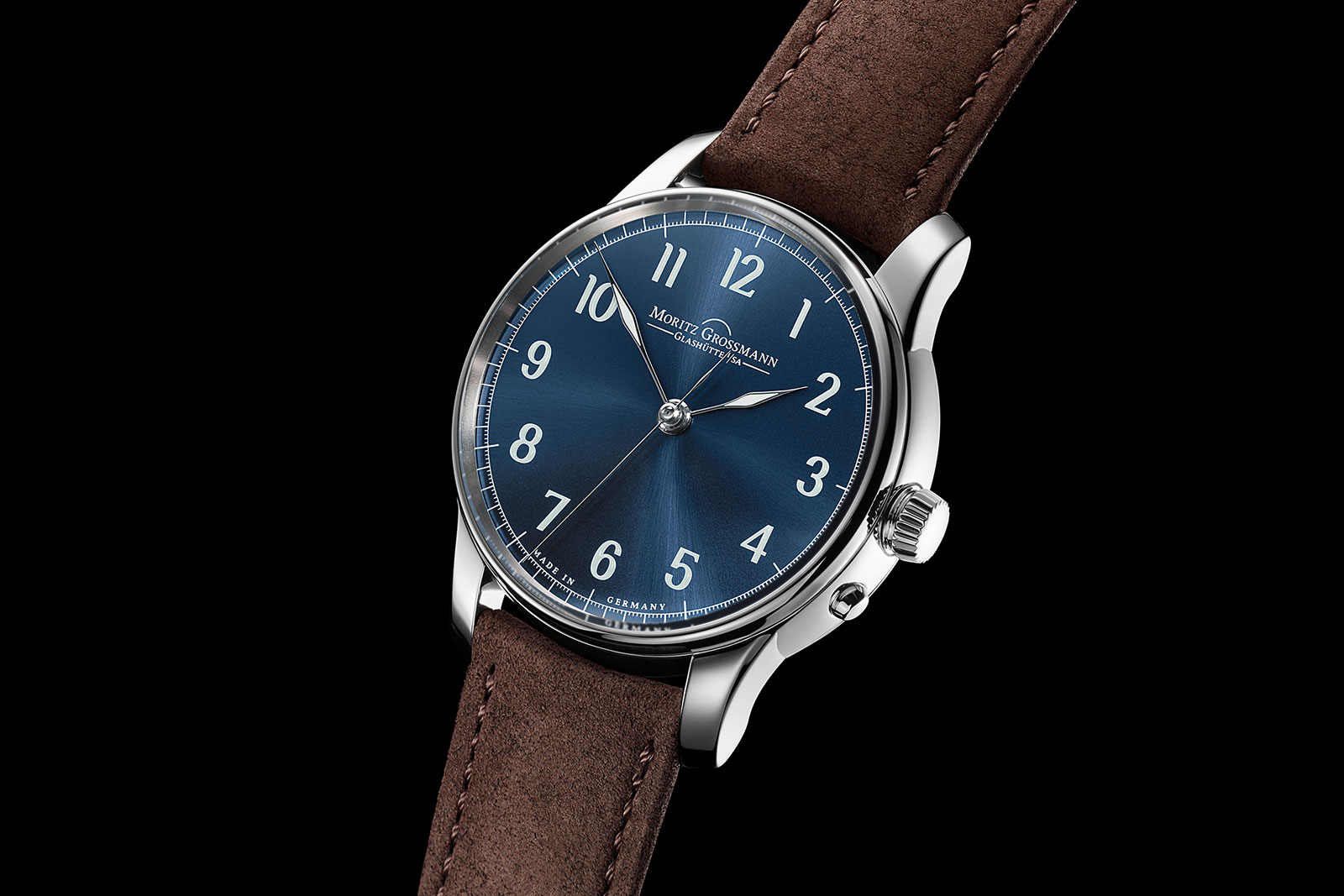 Revived only in 2008, Moritz Grossman takes its name from a 19th century German watchmaker. The brand’s modern-day watches live up to its historical namesake with pocket-watch inspired aesthetics and exquisitely finished movements.

Given its classical house style, all of the brand’s watches to date have had either a small seconds or no seconds at all. But its latest offering is the Central Second, Grossmann’s first timepiece with a, well, central seconds, giving it a slightly more modern look, while also bringing to mind the precision deck watches German watchmakers once produced for the country’s navy. 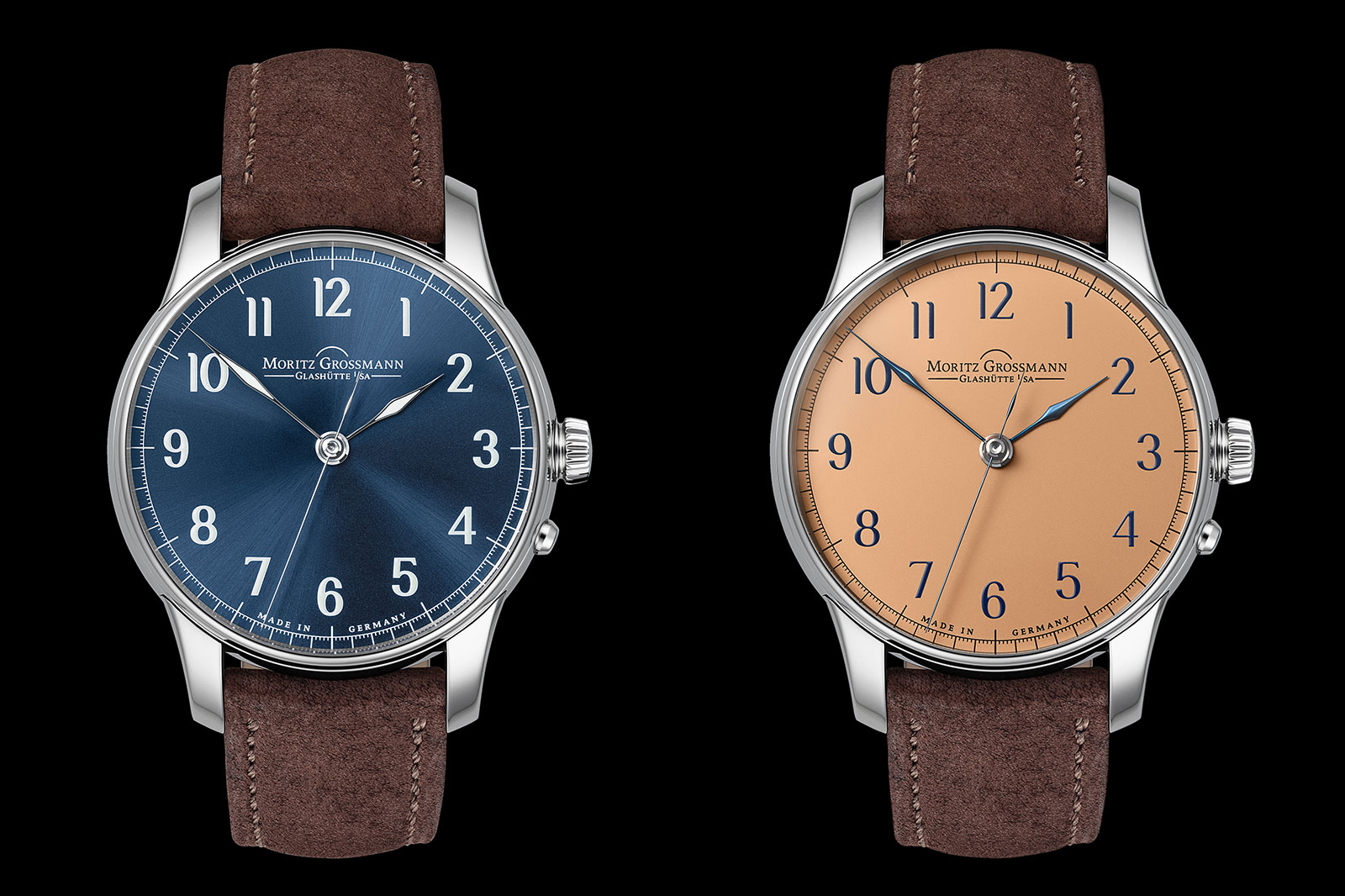 The blue dial is regular production, while the salmon-dial model is limited to 25 pieces

The key novelty of the new model is the dial layout, and to a lesser degree, the colours. While the style of the dial is identical to earlier models – namely the Arabic numerals in a proprietary font – repositioning the seconds hand immediately gives the watch a different look that’s slightly sportier and more functional.

Both versions of the new model are crowd pleasers in terms of colour – blue and salmon are both current fashionable shades – which probably bodes well for the Central Second, especially since it’s one of the brand’s more affordable offerings. 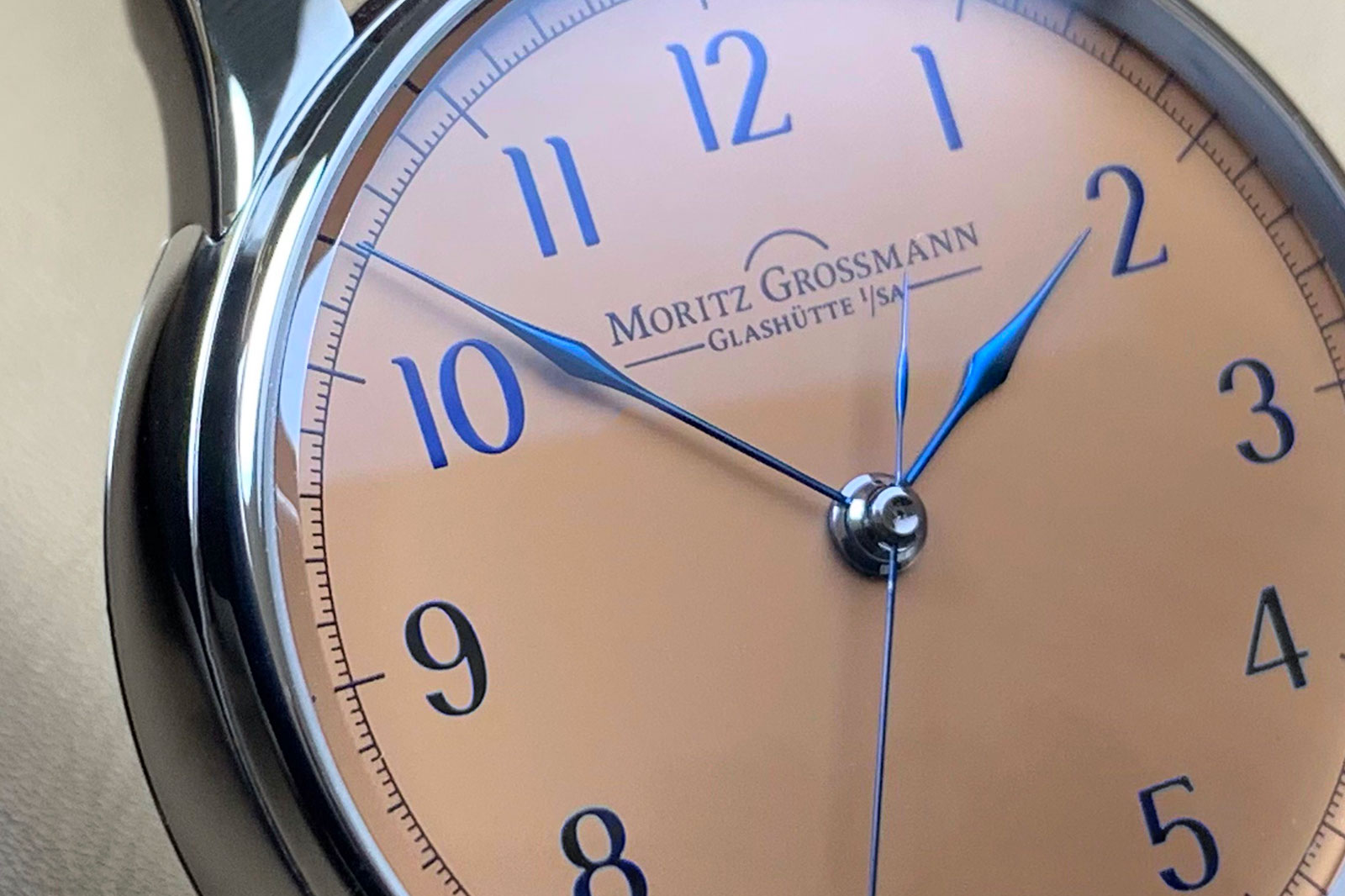 Importantly, the new watch is powered by a new movement, albeit one derived from an existing calibre. Driving the Central Second is the cal. 100.11 that’s based on the small-seconds cal. 100.1 found in the brand’s anniversary model, amongst others.

As is expected of Grossmann’s movements, the cal. 100.11 has a beautiful, traditional construction, exemplified by the large balance wheel that’s almost a third of the movement diameter. And as importantly, the movement is finely – truly finely – finished. 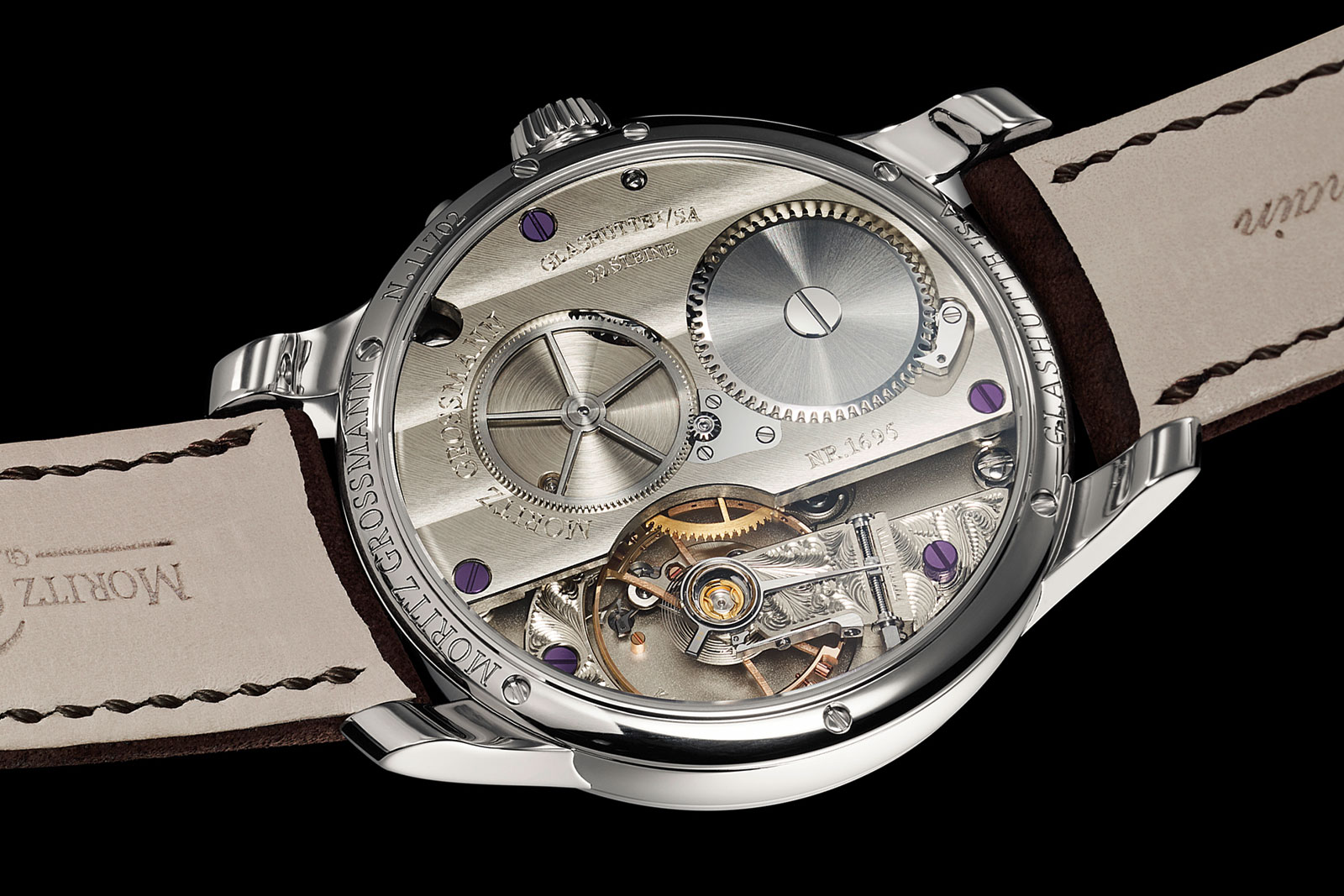 The balance cock is hand-engraved, as are the markings on the main plate

That said, the finishing has been simplified, albeit on a single component – the barrel ratchet wheel forgoes both the triple “solarisation” spiral finish as well as bevelled teeth found on the brand’s other movements. Still, the rest of the movement is carefully attended to, leaving it excellent by most measures, including the competition – Grossmann itself has set the bar high.

Priced at €21,500, the Central Second offers a lot of watch compared to its competition – its hand engraving is arguably the most delicately done amongst comparable watches – although it has a steel case, rather than gold. 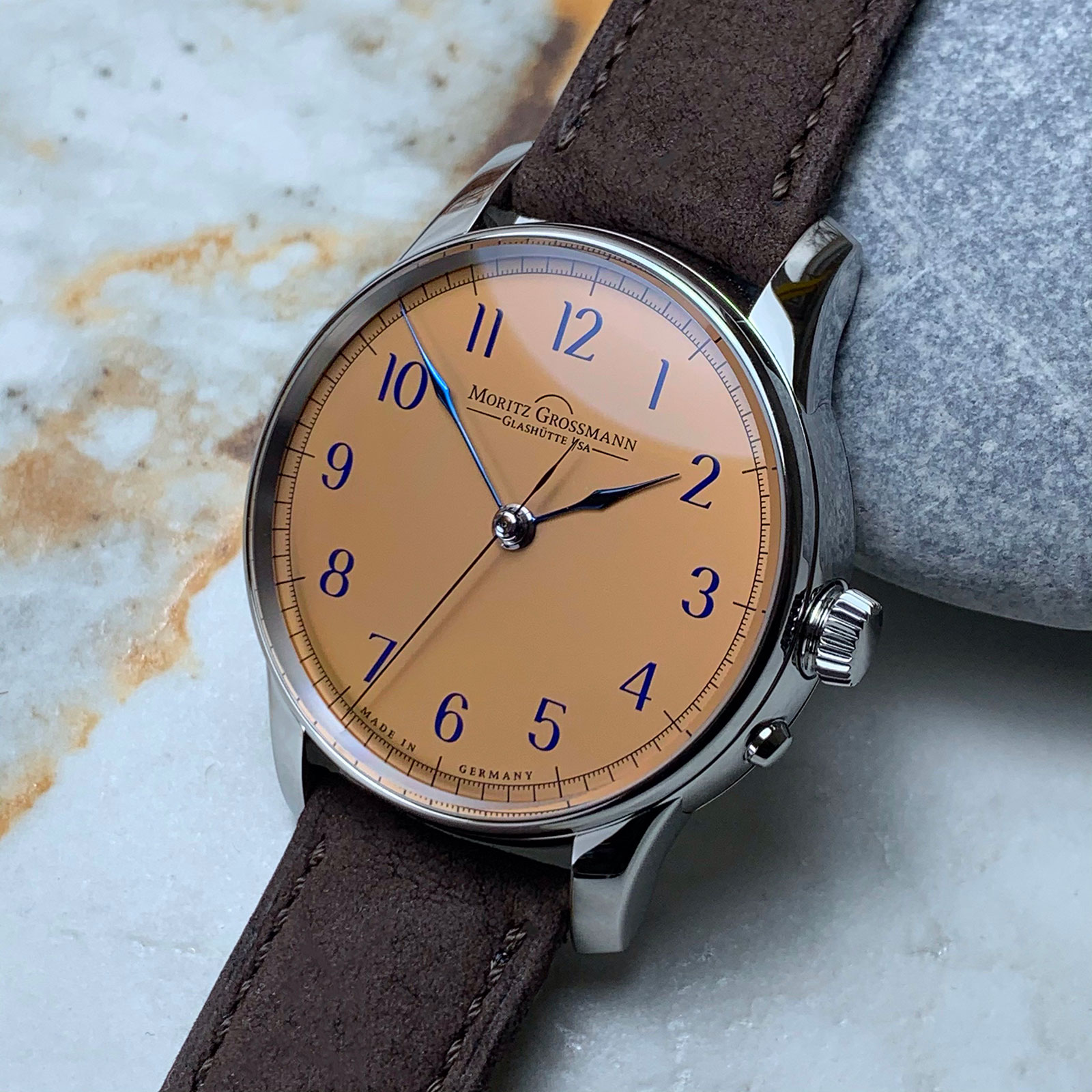 The pusher at four o’clock releases the seconds hand after it’s been stopped by pulling the crown, allowing for more precise time setting

A central seconds with Arabic numerals brings to mind no-nonsense instrument watches like pilot’s watches or especially the deck watches once used on navy vessels, which means the look is a bit generic. But the dial does leave it different from the rest of the brand’s catalogue, which is mostly made up of conservative-looking watches.

Both dials are no doubt well done, as Grossmann dials typically are. The blue version is probably the most contemporary watch Grossmann offers, but it still retains the brand’s signature hands. The steel hands are hand made – delicately thin and finely mirror polished. The salmon dial model has the hands heat blued, while the blue dial is matched with hands containing a solid luminescent composite known as HyCeram. 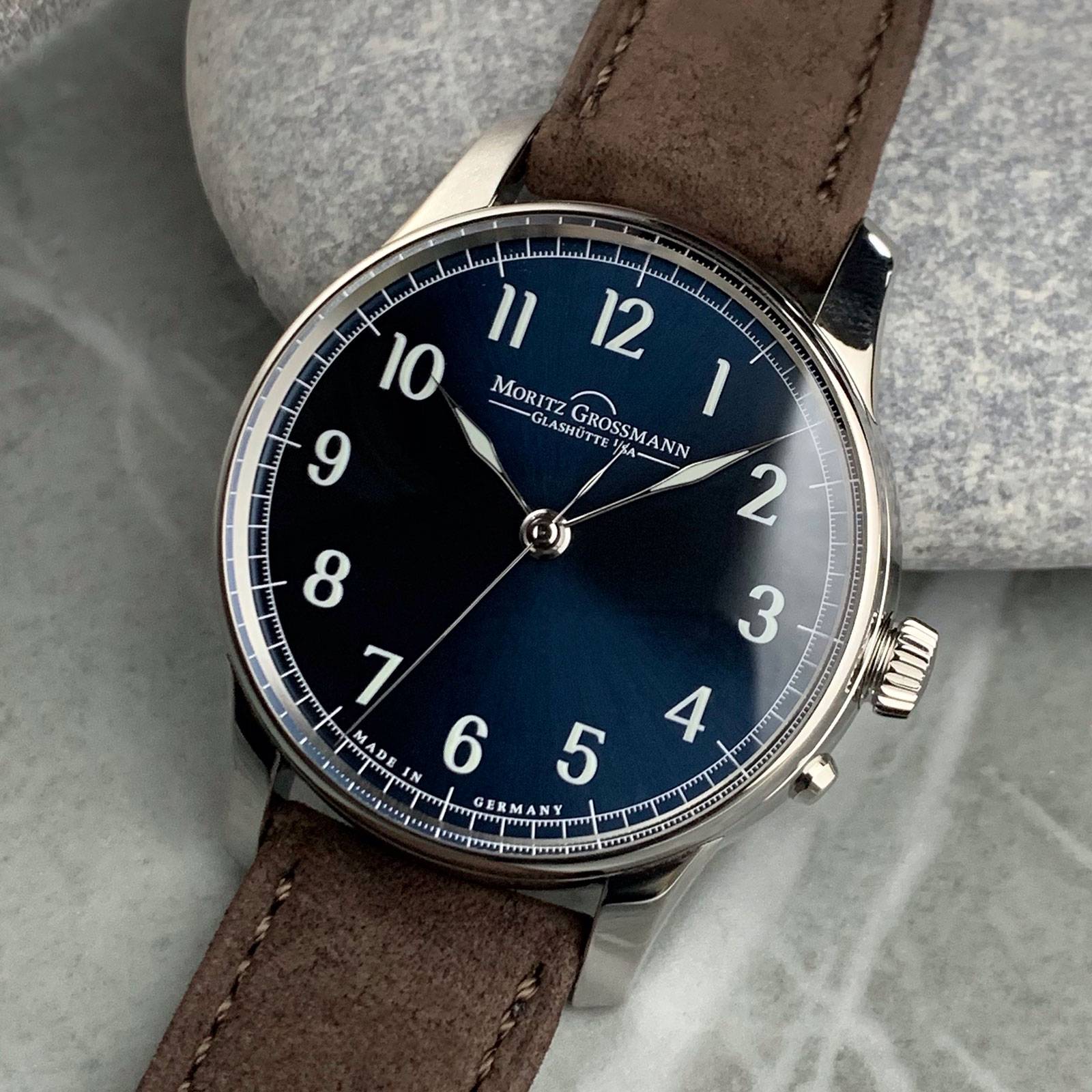 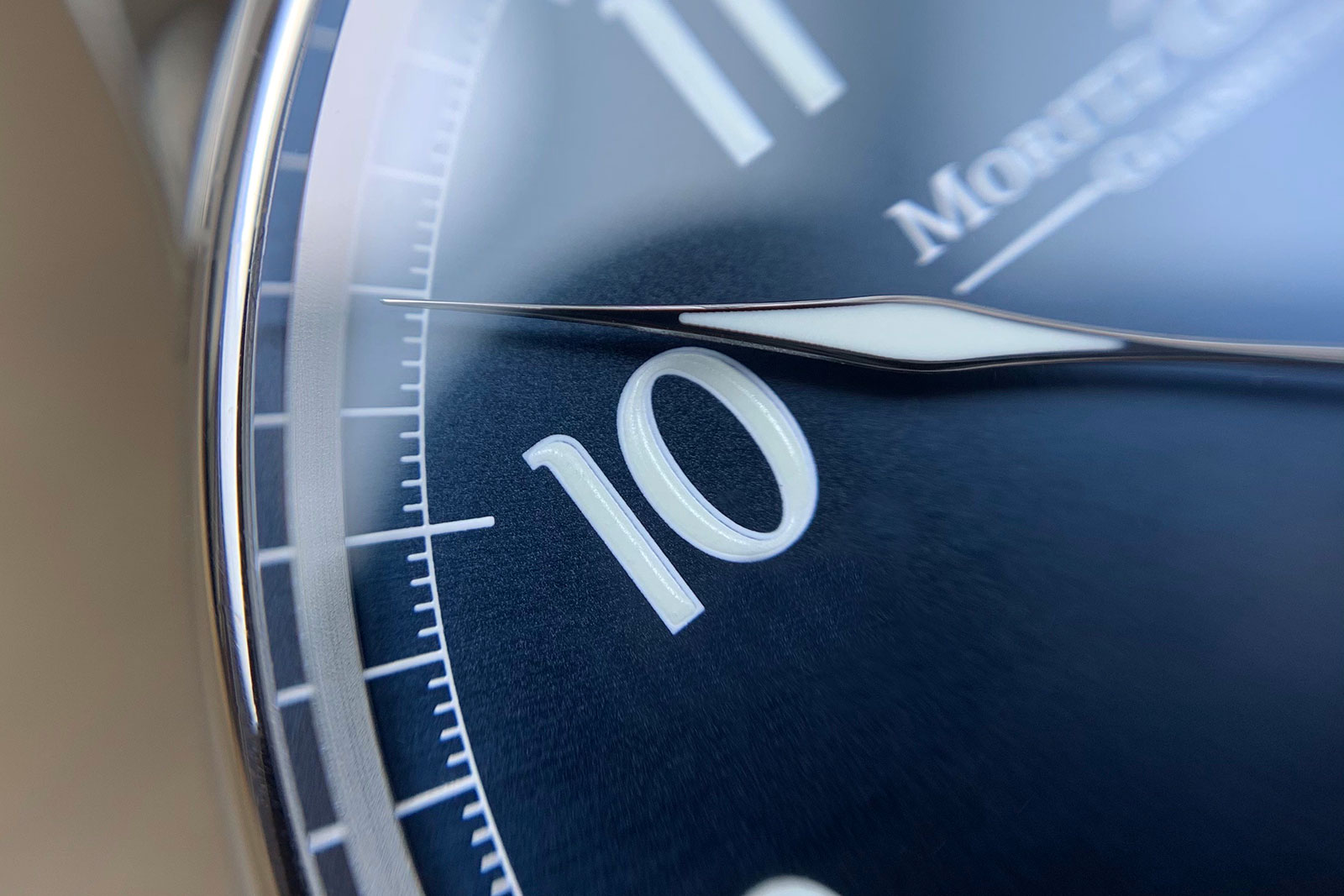 As the new movement is based on the cal. 100.1 that has a small seconds, modifications were needed to move the seconds hand from six o’clock to the centre of the dial. 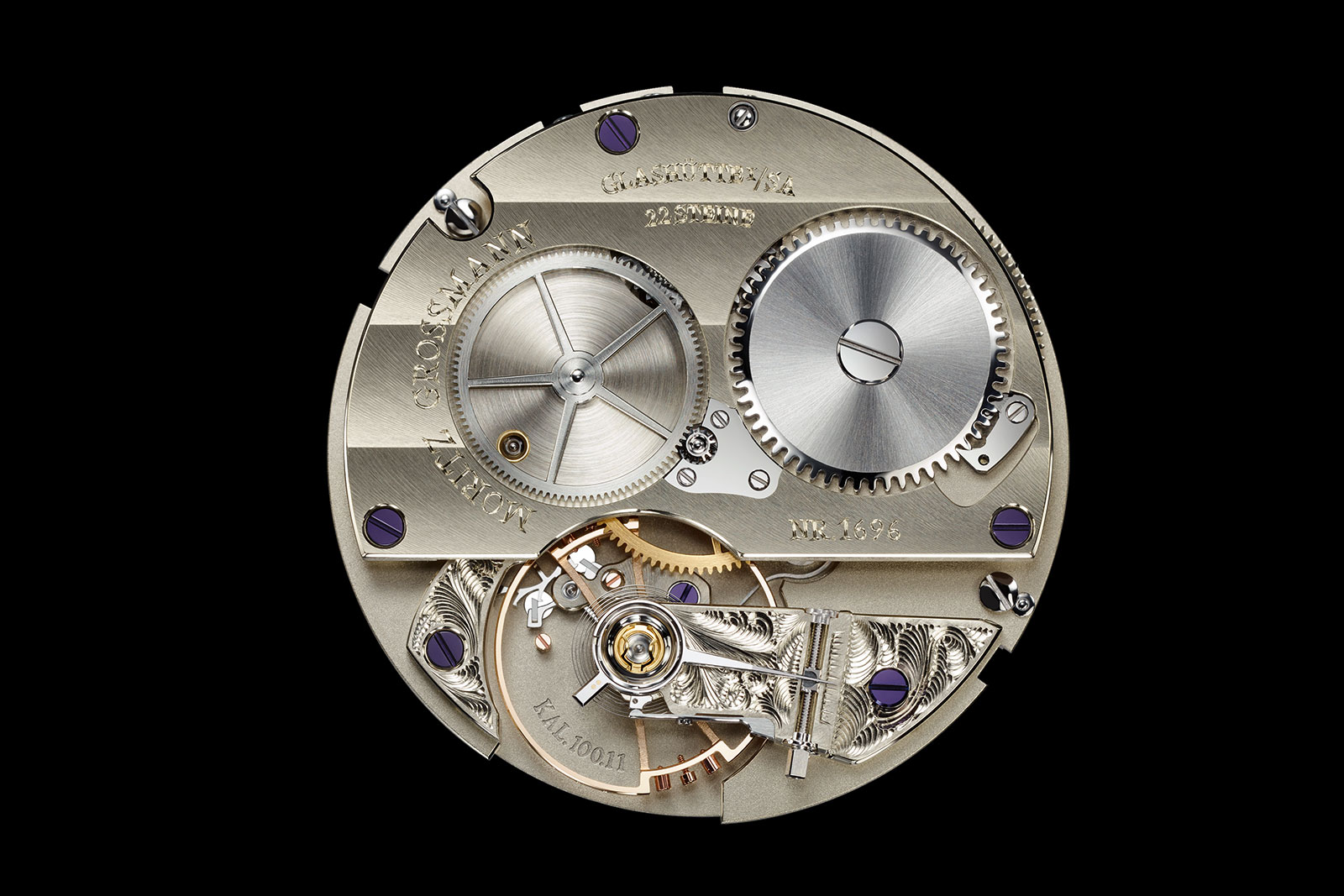 The cal. 100.11 relies on a slightly simpler solution: the central seconds is driven from the third wheel. Since the third wheel is hidden underneath the two-third plate, a large intermediate wheel with five thin spokes is placed on top of it.

Coupled to the third wheel, the intermediate wheel drives a tiny pinion in the centre that is connected to the central seconds hand – and secured by a small, black-polished bridge. 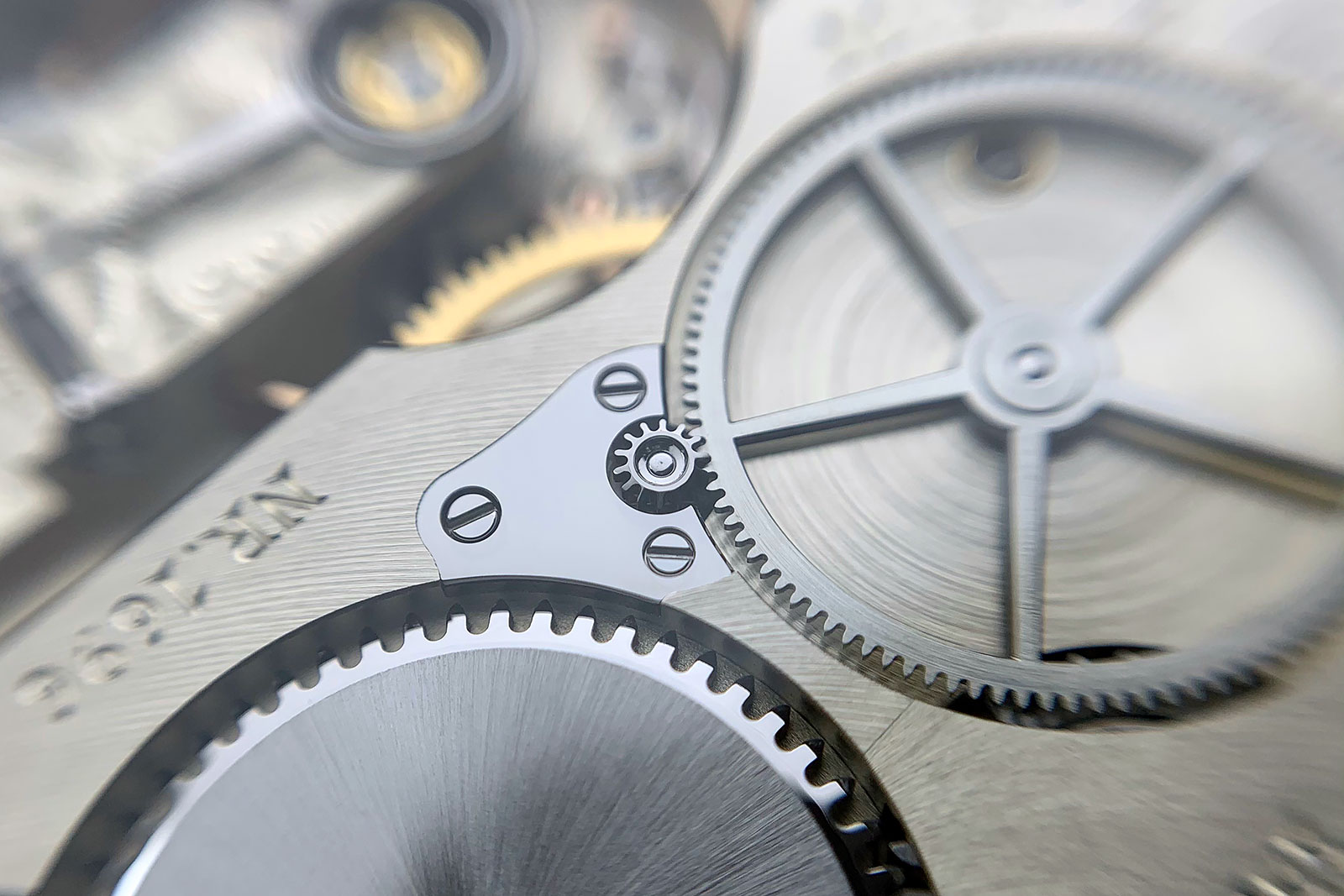 The pinion connected to the central seconds (centre) is driven by the large intermediate wheel, which is in turn coupled to the third wheel beneath

Notably, instead of adding an additional bridge to hold the extra parts, as is convention for movements with indirect central seconds, the additional gears for the seconds are hidden within an thicker two-third plate, allowing all the visible components to sit on same level. The result is a clean two-third plate, as well as a taller, and presumably more robust movement.