China remains the only market capable of providing an immediate boost to Swiss watch sales. The export figures announced this morning by the trade body Federation of Swiss Watch Industry (FH) appear to indicate that watch exports have reached the inflection point of the negative trend that has been going on for too long. Exports are still down 11% in August year on year, but after the massive slump in the previous months – with April exports falling 81% – the fall seems to have moderated.

Cumulative watch exports for the year to date are 30.5% below the same period in 2019 – which will remain a record high for a long time – but , without hoping for miracles, the industry can expect a substantial improvement by the end of the year.

Eldorado for the luxury-goods industry

According to a recent study co-published by Bain & Company and Italian luxury trade association Altagamma, Chinese consumers will be the main contributors to growth in demand for the luxury goods over the next five years. The report predicts that more than 90% of growth over the period will be attributable to Chinese customers. I would be a little more cautious about the percentage, but I agree with the report’s observation that all players in luxury goods are doomed without the Chinese market.

Still, a glimmer of hope comes from the United States, where the latest indicators on luxury goods sales are starting to turn green. The multiple, converging negative factors affecting consumption – namely COVID restrictions and uncertainty about the presidential election – seem to have less influence on sales than the excellent performance of the stock market, which is close to its all-time high.

And the United States, even more so than China, is a market that is highly accepting of e-commerce, even for luxury goods. Swiss watch brands that have made great strides in enhancing their e-commerce and digital communication in recent months – Omega and Breitling stand out for me – are beginning to reap the rewards of their efforts.

A recent report on the luxury-goods industry published by Morgan Stanley titled Not Just a China Story rightly reminds us that one out of every five francs (22%) in sales of luxury goods worldwide is spent by the American consumer. For watchmaking, the proportion is lower, but still significant at one franc in eight (12%). 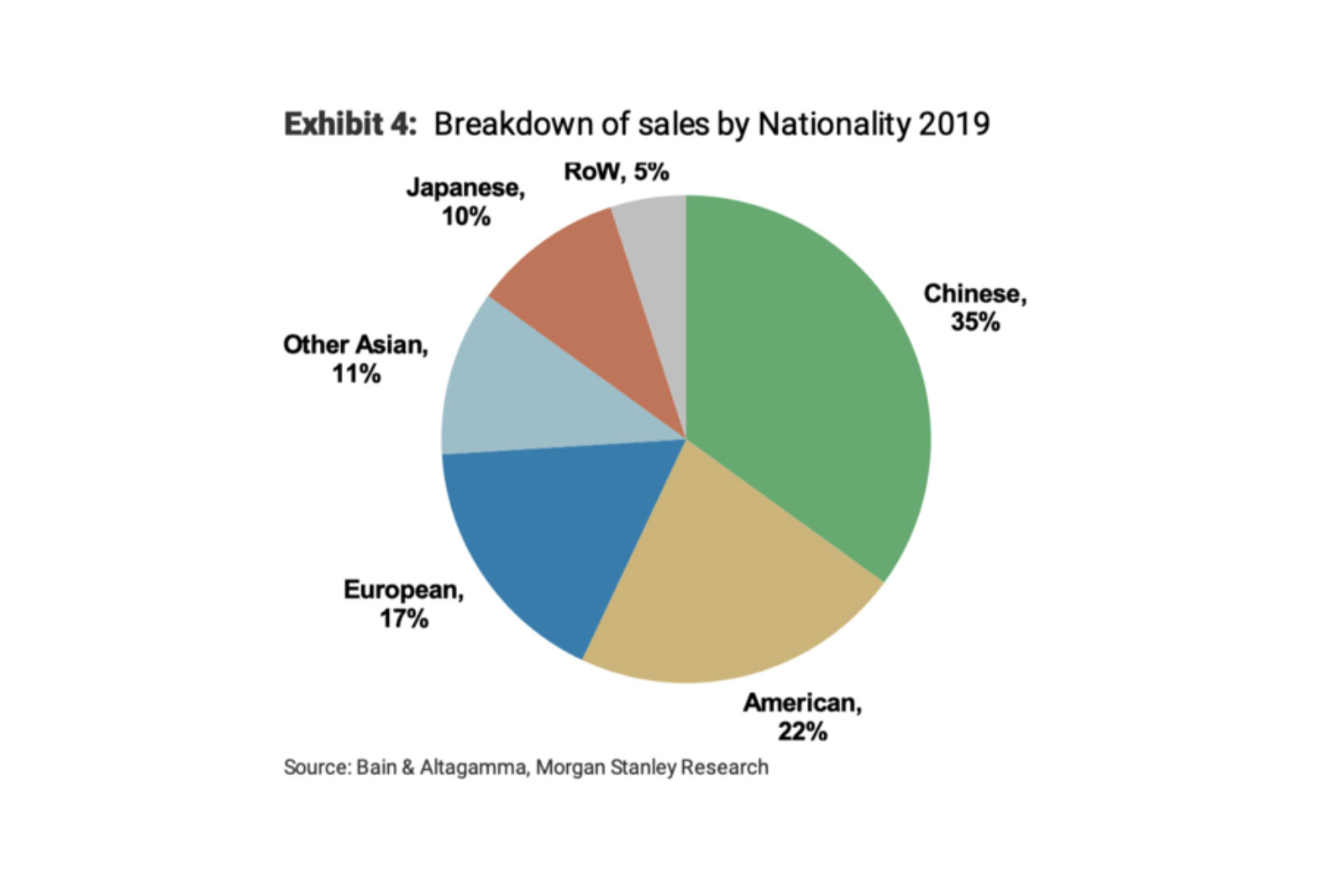 Rarefied air at the top

Another trend that the recent export numbers confirm is the erosion of the base of the Swiss watchmaking pyramid – clearly thanks to smartwatches. Apple, which just unveiled the sixth version of its Apple Watch, will sell three times more watches this year than all the Swiss watch brands combined, by my estimate.

Some Swiss watch brand like TAG Heuer have recently launched interesting, luxury smartwatches, but they are all in a price segment that is significantly higher than their American, Korean, or Chinese competitors.

We can see the trend in the table below: watches with a public retail price between CHF5,000-12,000 (meaning an export value of CHF2,000-5,000) see their export volume recovering. In this price segment, it remains the same brands, as always, that are the dominant players – Rolex, Omega, Tudor, Longines, and a handful of others.

But as a whole, exports in all price segments declined in 2020 in both value and volume. The industry has lost 5.6 million units since the beginning of the year, compared to the same period in 2019, and that comes after a drop of 3.1 million units for 2019 agains 2018. The sharp fall in numbers hurt the watch industry’s specialist suppliers most markedly, particularly since the dominant watch brands are largely vertically integrated. 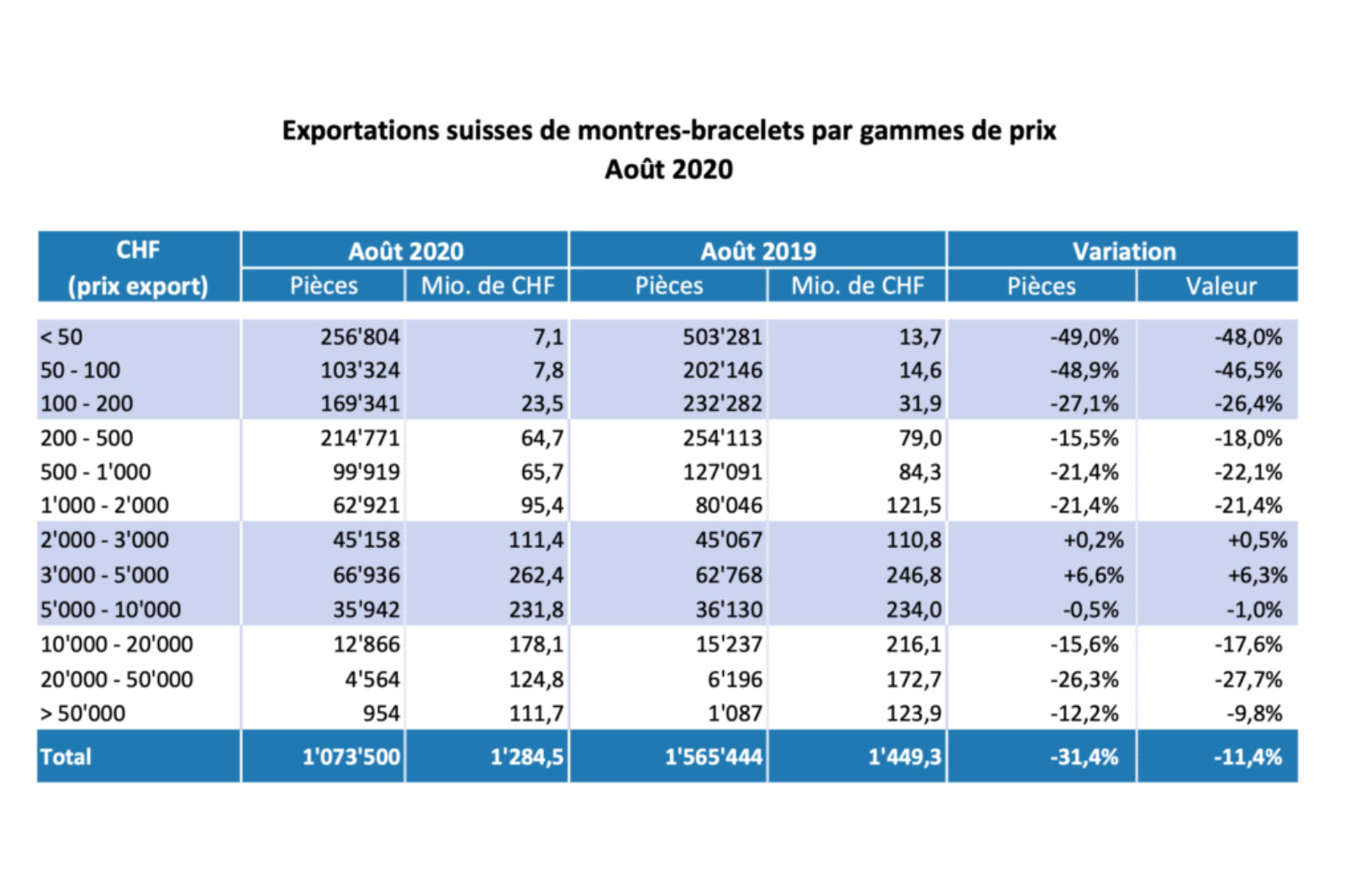 Returning to the local market

A chief executive of one of the few watch brands to survive the COVID-19 tsunami without major damage recently revealed what he was telling his sales teams around the world – the captive market of the Chinese tourist market is gone. The scenario he sketched out for his salespeople was stark: “Imagine a wall all the way up to the sky around your country. No more tourists! How do you sell? You reconnect with your local market, because the trips of the leisure traveller will not come back for a long time.”

I agree 100% with his observation that brands have to revert to building the local brick-and-mortar market, in addition to all the digital initiatives that allow them to stay in touch with their customers. Direct-to-consumer and local are complementary, just like the “phygital” that creates bridges between the physical and digital worlds.