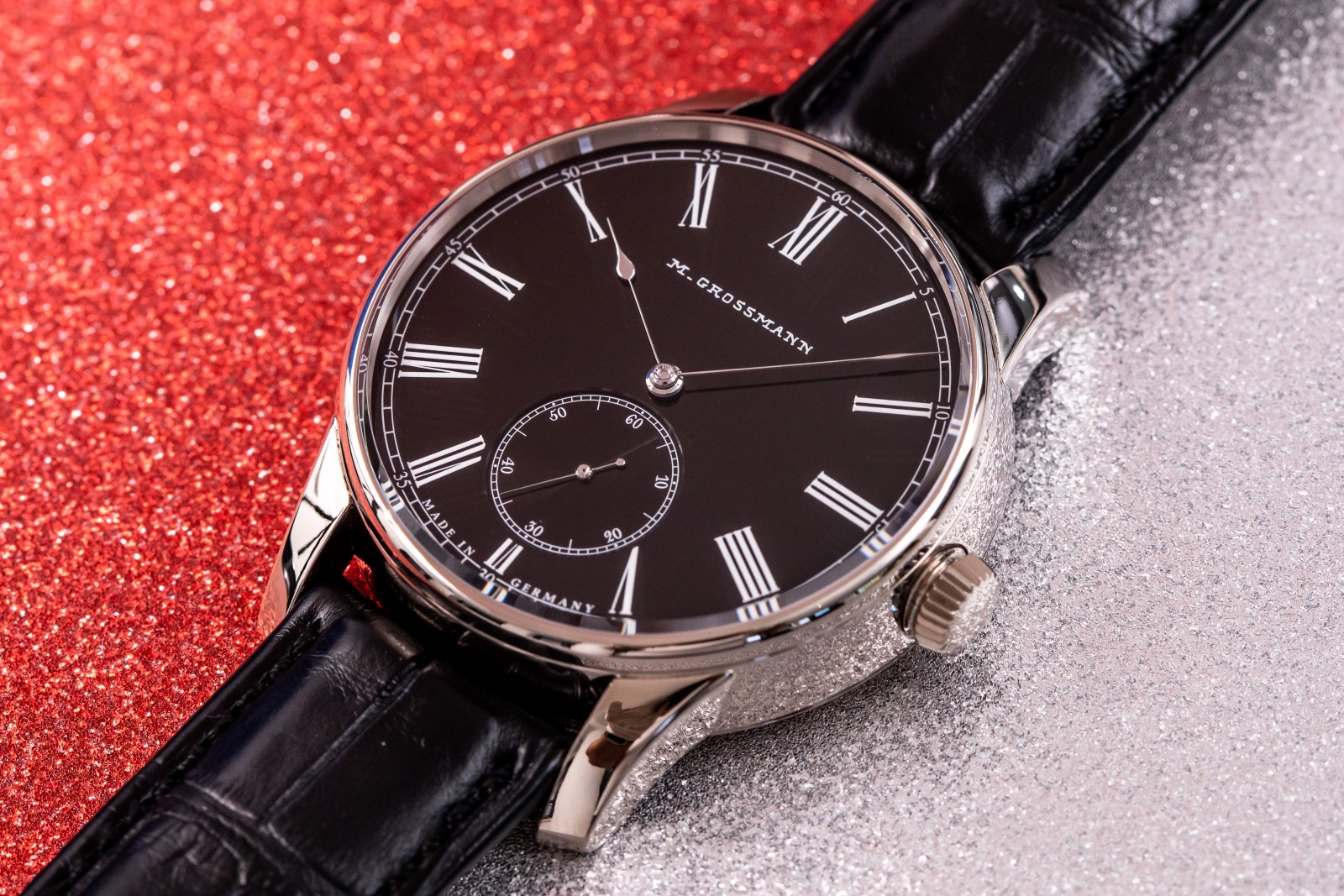 The Moritz Grossmann Hamatic garnered a lot of attention upon its release last for being one of the most innovative and clever time-only automatic watches in recent years, with the central attraction being its cal. 106.0 movement equipped with a modern take on the anachronistic hammer winding mechanism.

Now Moritz Grossmann has unveiled the Hamatic Vintage, a limited edition of 25 that fixes one of the primary design weakness of the original – a modern logo that looked out of place – combined with a black dial and 18k white gold case. 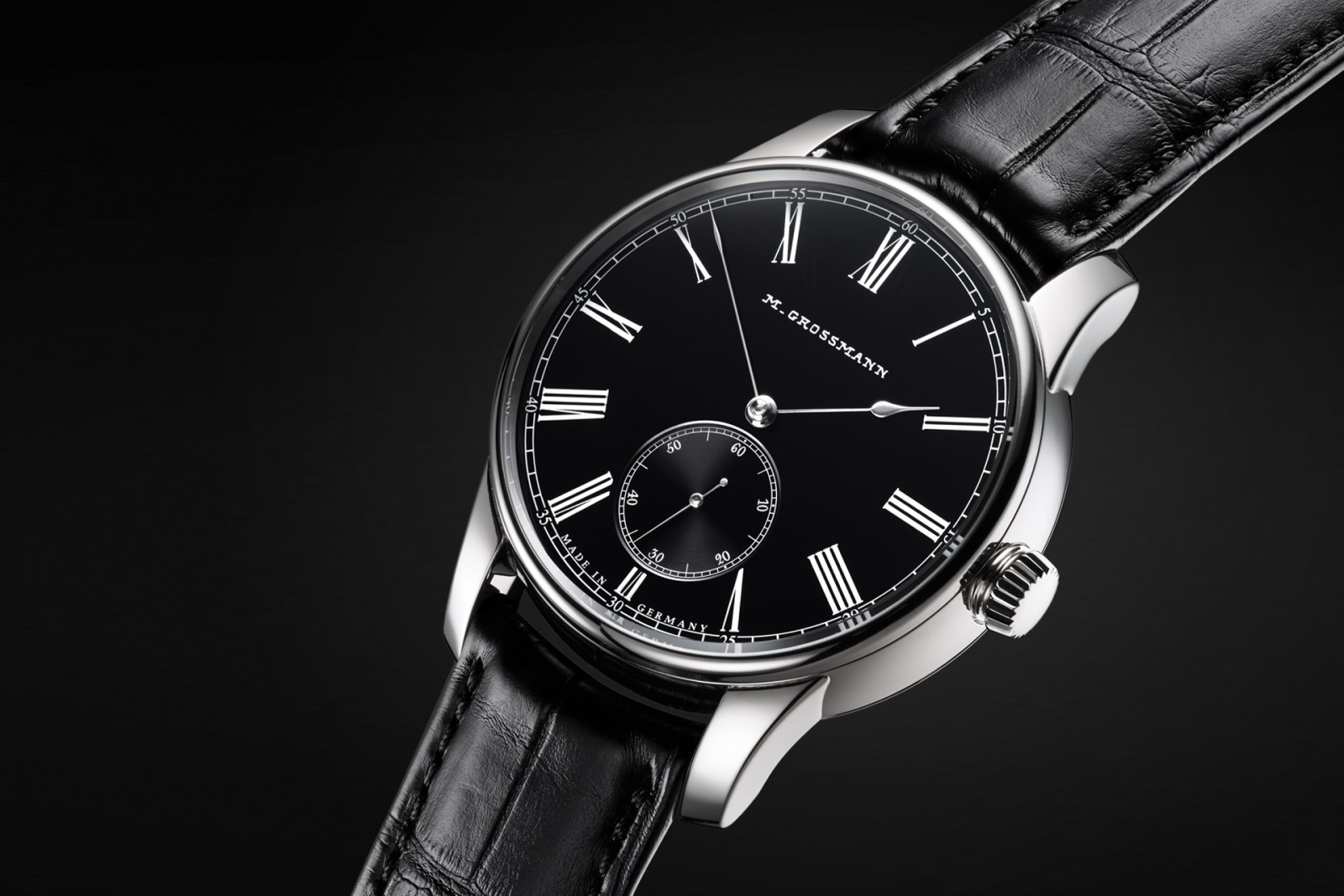 The Hamatic Vintage takes a finely executed movement and pairs it with the most attractive dial yet.

The differences that set the Hamatic Vintage apart from the serial-production model lend the limited edition an entirely different aesthetic. While the standard version is a modern, perhaps youthful, interpretation of the classical dress watch, the Hamatic Vintage is the embodiment of old-world classicism – which is a fitting aesthetic for the movement.

If one criticism could be levelled at the design, it is that the exquisitely hand-finished hands are slightly too fine for the 41 mm case, though the incredibly narrow hands – which are hand made – are impressive works of artisanal craft in their own right.

The Hamatic Vintage is priced at a modest 7% premium over the serial-production model, which, considering the 25-piece production run and the more attractive dial, is a justifiable amount as these things go. 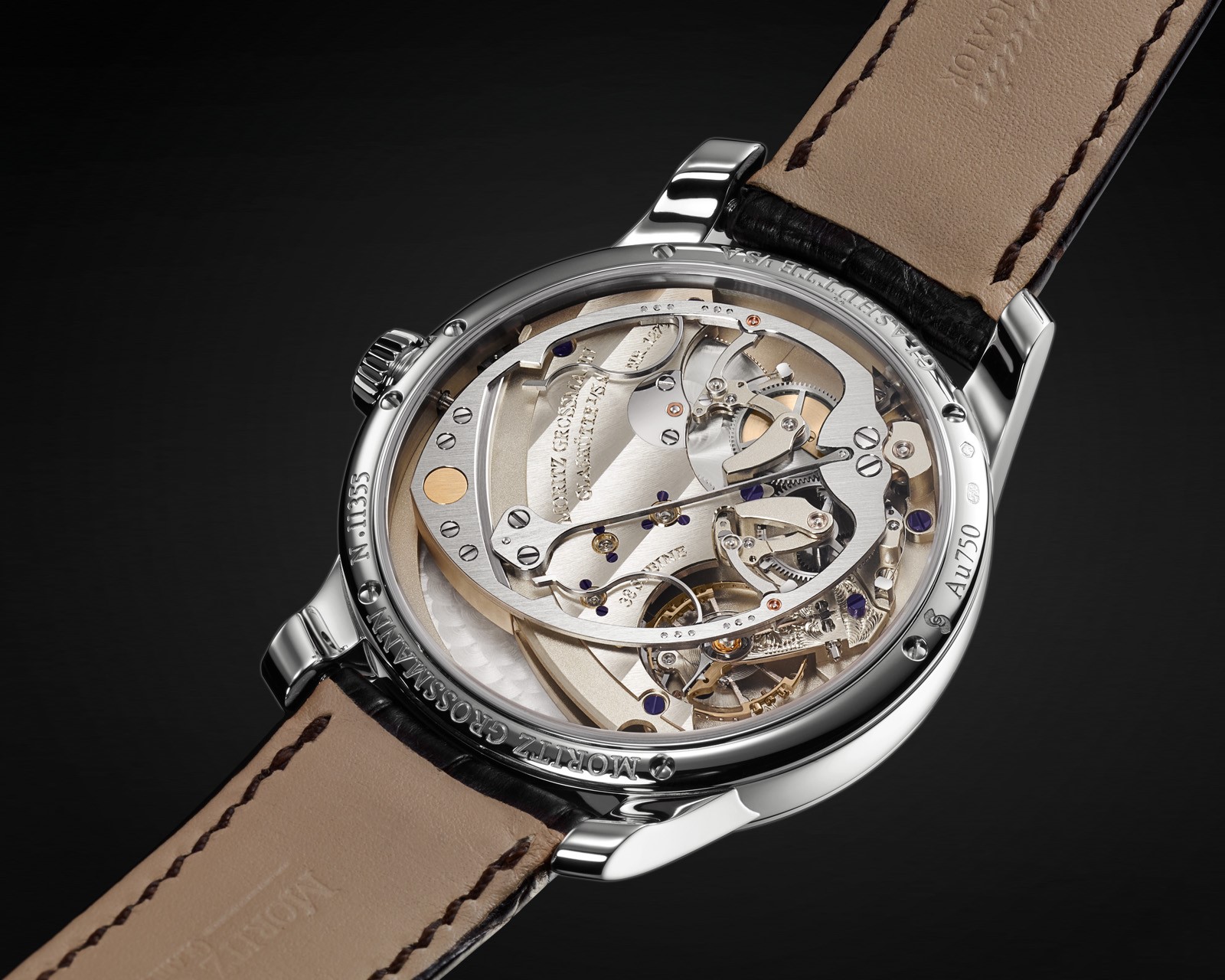 At the heart of the Hamatic Vintage is the same, impressive movement. The movement relies on a large, egg-shaped pendulum that swings back and forth to wind the mainspring via a pair of pawls and wheels, essentially a modern version of the hammer-winding mechanism found in century pocket watches and early automatic wristwatches.

Hammer automatics were inefficient, which is why they were succeeded by the full-rotor automatic and largely remained a historical novelty. All of the weaknesses of the traditional hammer winding mechanism were addressed in the design of the cal. 106.0, making it as efficient as the average modern automatic according to the brand.

Amongst other things, the hammer’s center of gravity lies far from its pivot – each sits on opposite sides of the movement – greatly increasing the efficiency of the winding system. As a result, Moritz Grossmann claims a mere five-degree motion of the pendulum is sufficient to wind the mainspring.

The movement is elaborately finished in the traditional German, or Glashütte, style and features bridges made of German silver that are hand-engraved, jewels set in screwed gold chatons, solarisation on the mainspring barrel, and anglage everywhere, to list but some of the decorative techniques employed. 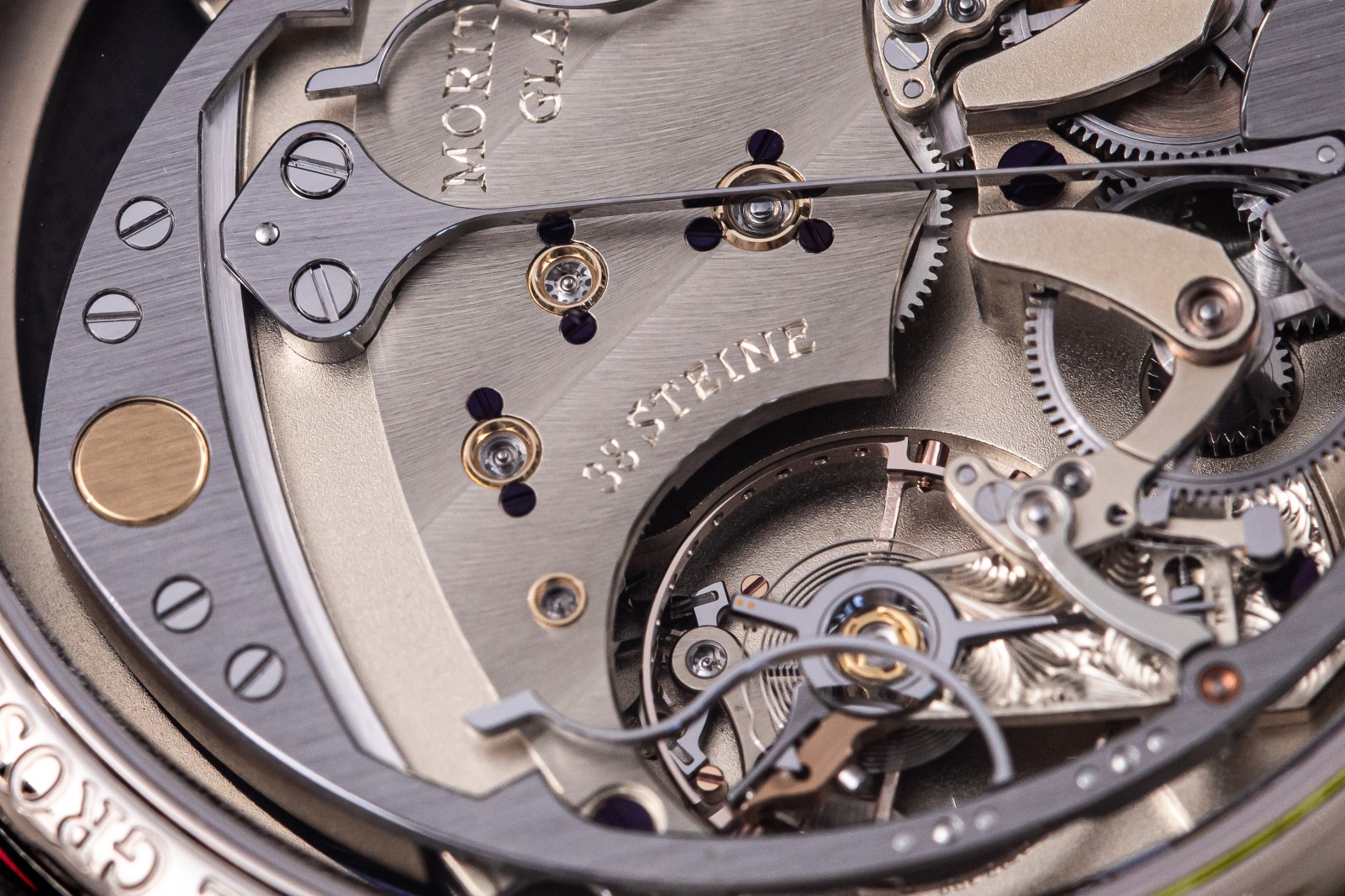 The dial of the Hamatic Vintage is fashioned after 19th-century pocket watches, right down to the Grossmann logo of 1875. It’s a glossy black that starts out as a German silver dial blank, which is then polished before a black-anthracite lacquer is applied. Along with the Roman numerals and railway minute track, the look is very much one that resembles a pocket watch.

The steel hands, though identical in form to the standard Hamatic, do not undergo the same heat-treatment that renders them a violet-brown hue, which has become something of a brand trademark. But the hands are no less finely finished – they are fabricated and finished by hand, ground and polished such that that seconds hand is a mere 0.1 mm wide at its slimmest point. 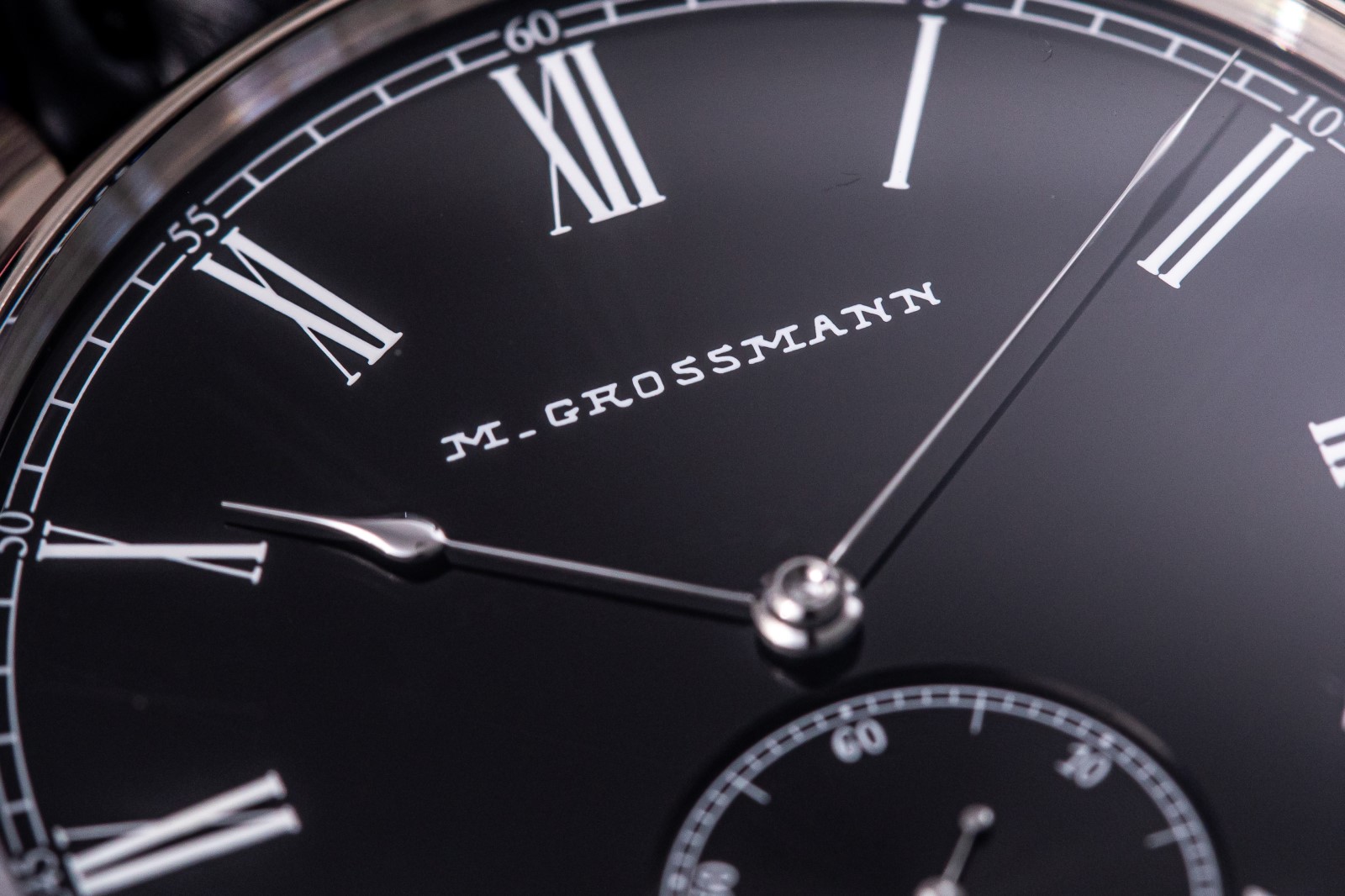 The case is identical in size to other time-only Moritz Grossmann watches, meaning it is slightly large for a simple watch. It measures 41 mm in diameter and 11.35 mm high.