The Swiss watch export figures published yesterday morning by the Federation of the Swiss Watch Industry (FH) speak for themselves – watch exports fell by 82% in April alone, for a cumulative drop of 26% since the start of the year.

The historic, brutal fall is on such a scale that it makes us fear the worst for a year that already looked catastrophic after the first quarter. How can we explain the numbers?

The FH announcement noted “the details of this generalised decline are of no particular interest – with the sole exception of China – insofar as it reflects an exceptional blockage rather than a change in demand”, referring to the relatively strong performance of China as it reopens for business.

But that nevertheless must feel like a slap in the face for the watch industry’s sub-contractors – specialists who produce components for building a wristwatch – who are suffering the most from a drop in exports to the tune of 1.8 million watches in April. 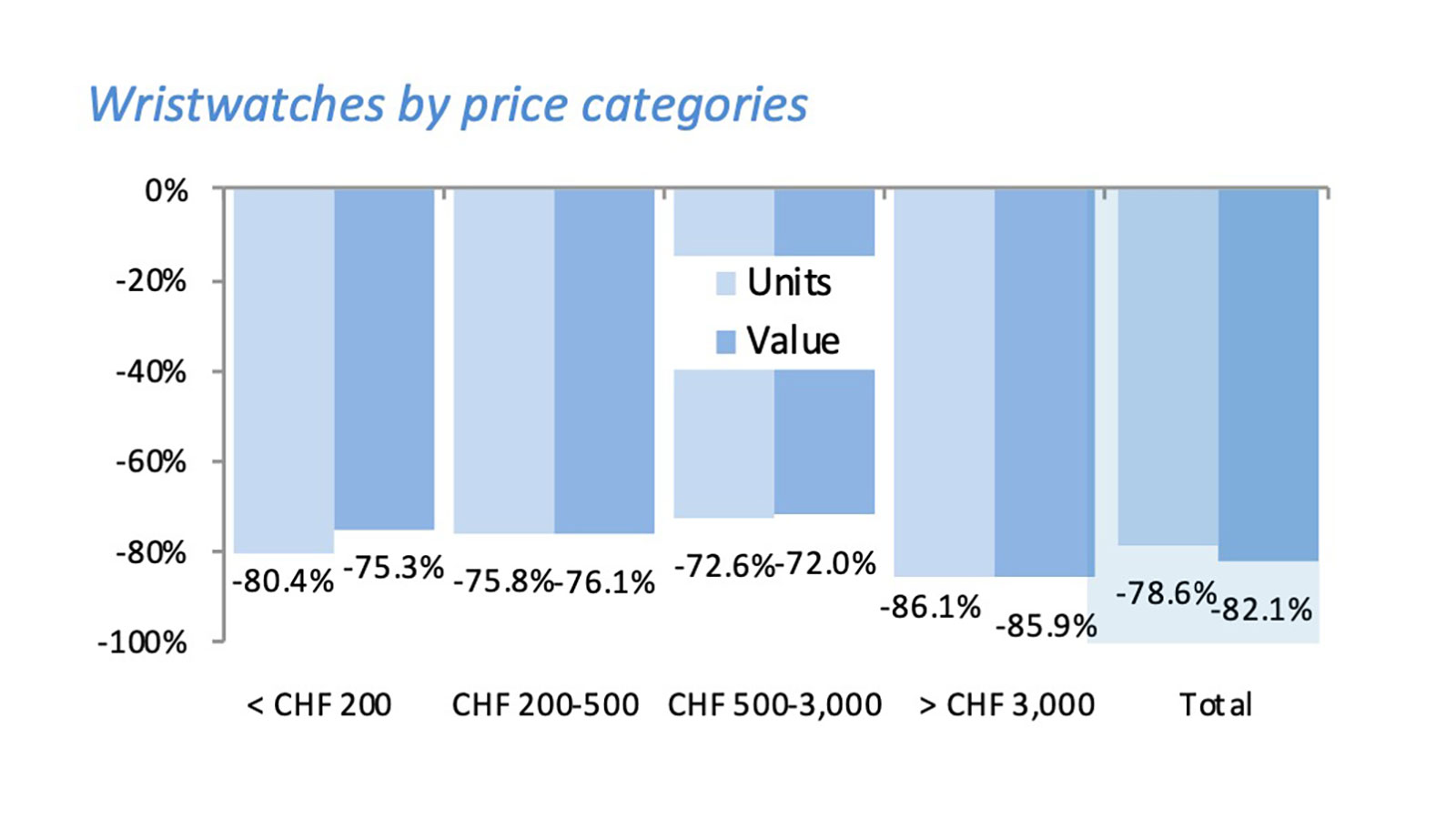 April exports by price category. (The price ranges are export prices and need to be multiplied by 2.5 to arrive at retail prices.)

The COVID-19 pandemic and the total shutdown of economic activity around the world created an unprecedented situation that has caused supply chains and markets come to an abrupt and simultaneous halt.

While Swiss watch brands had got off to a rather good start to the year, the complete stoppage in China just before the Chinese New Year in the second week of February served as a signal of impending disaster. While January had seen a strong increase of almost 10% in watch exports, the number declined 9% in February and then fell 22% in March, heralding more complicated times for the watch industry.

The COVID-19 crisis serves as the starting point for explaining the dramatic numbers, but it is not enough to understand everything about a crisis that heralds the worst year for Swiss watchmaking since the post-war period.

Despite being a conservative estimate on my part, I still put the decline for watch exports in 2020 at -30%, which would bring us to 14 million watches and an aggregate value of CHF15 billion, which corresponds to the value in 2010. With inflation, it is difficult to compare export statistics in terms of value, but the predicted number of watches exported this year will be on par with 1947-1948, which saw 14.5 million watches sold.

Moreover, my prognosis is that 2021 will see a return to growth, but that it will take us 10 years to return to the export volumes of 2019.

No one could have foreseen such a disaster, where public health management has taken precedence over economic interests in almost every country. But neither should we fall into the trap of trying to explain all the problems of the industry with a dramatic economic element not seen since the 1930s.

No crisis encountered by our industry can compare, not even the Quartz Crisis that lasted almost ten years from 1975 to 1984. It had a devastating effect on the industry – leading to the destruction of more than 56,000 jobs, or some three-quarters of the total, in the space of fifteen years.

The COVID-19 pandemic’s impact on employment will be be less severe than during the Quartz Crisis, because today most manufacturing is carried out by machines, or even robots in some cases. The Swiss watch industry accounted for 59,000 jobs at the end of 2019, and unfortunately by the end of this year we will see 5,000-6,000 of those jobs disappear. The biggest losses will be in the subcontracting space, which is suffering the full force of the dizzying fall in watch volumes – already a fall of 3.1 million units last year and probably double that this year.

The structural elements that are disrupting the luxury industry in general are:

Bright future for a few

At the risk of repeating myself, the Swiss watch industry is being powered by few brands that have been outperforming for years and will benefit from the difficulties now encountered by most brands. 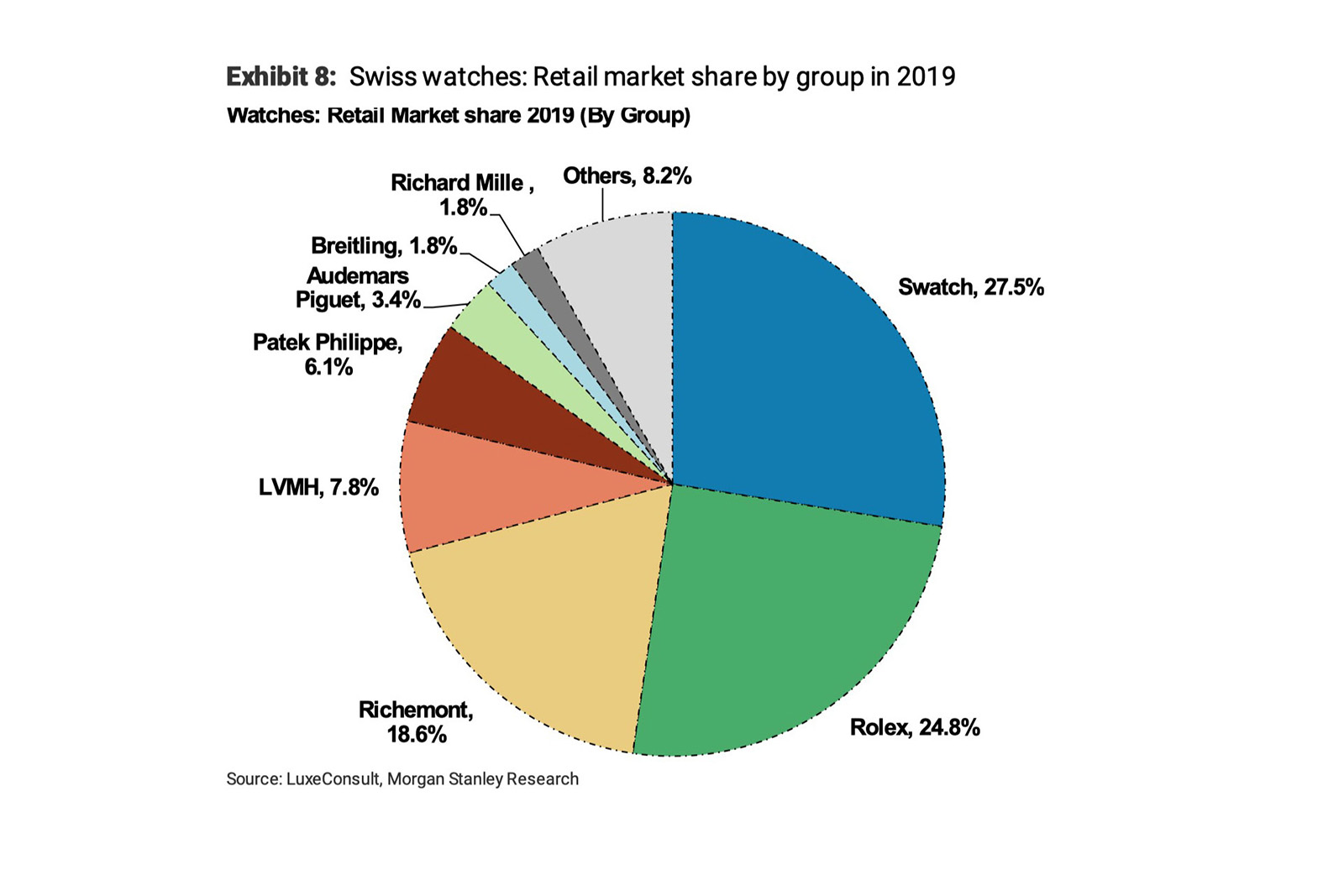 Note that five companies have 50% of the market, and 28 brands generate 90% of total sales

In addition to the few brands that are among the leading players, a number of niche brands have created strong positions in their respective and specific market segments.

To survive a brand either has to flex its muscles with massive investments in communication – and thus become a major player – or be strong in a niche. But either cases, a long-term vision is needed to remain calm in the storm and sail onwards to calmer waters.