George Daniels (1926-2011) made just a few dozen watches over his four-decade career – nearly all from scratch and by hand – but most were pocket watches, including the famous Space Traveller that sold for a record £3.62 million last year.

In fact, aside from the Millennium and Anniversary watches, which were both serially produced, Daniels only made four wristwatches. The first two wristwatches – the “Spring Case” tourbillon and the compact chronograph – were just like his pocket watches, one-off creations hand made by Daniels himself in the early 1990s.

Produced over a decade later, the other two wristwatches were designed by Daniels in 2001, but as he was then in his eighties and mostly retired, produced mostly by Roger W. Smith, his apprentice at the time and later his successor. The two are the Blue and the White, a pair of almost-identical tourbillon wristwatches in surprising, rectangular cases. 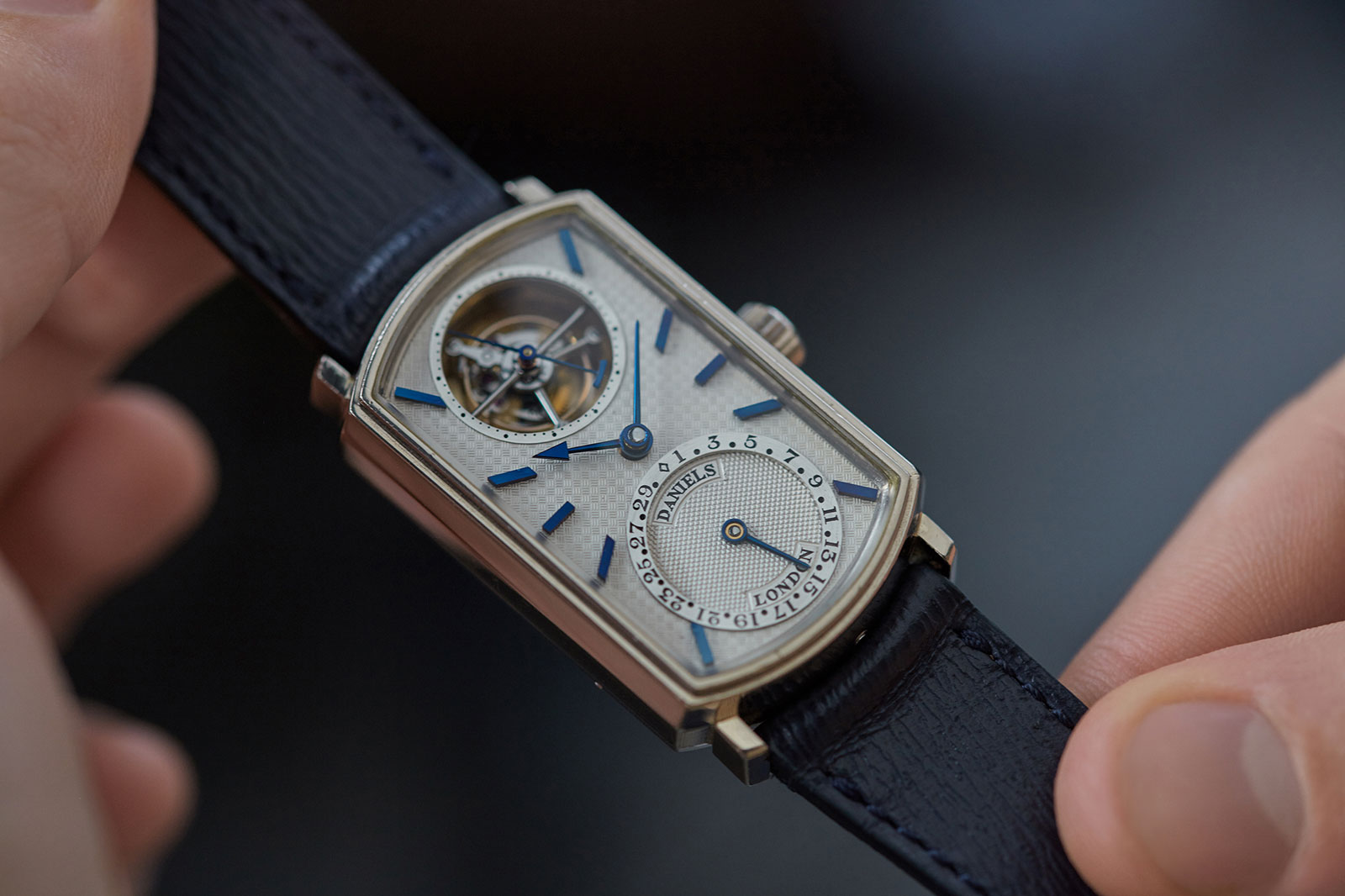 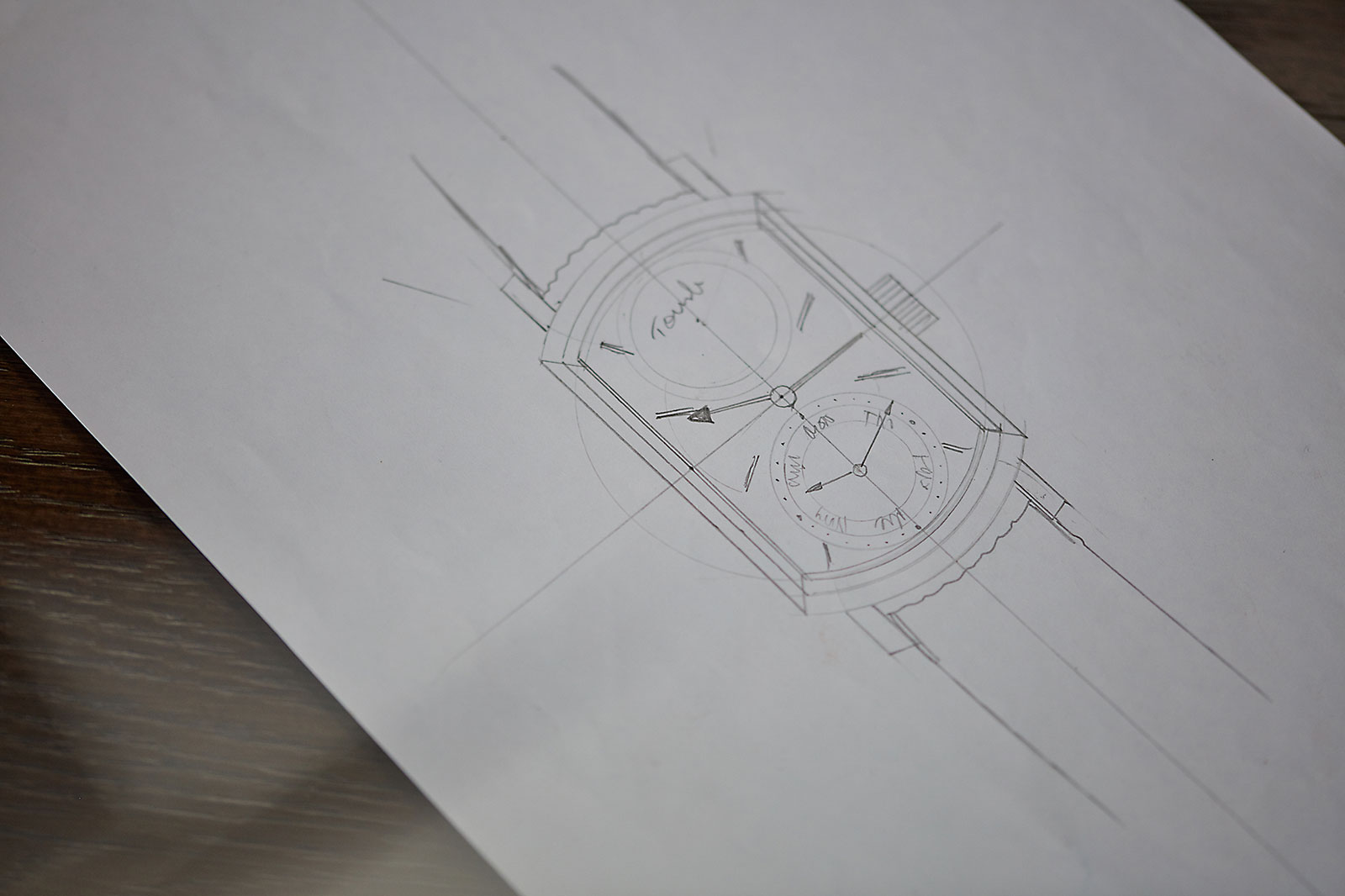 Daniels’ original drawing for the Blue

As Roger tells it, Daniels gave him a sketch of the Blue, and tasked him with turning it into a watch. At the time, Roger was finishing the last of the Daniels Millennium watches – just over 50 were made – and had decided to remain on the Isle of Man, where Daniels lived and worked, in order to pursue a career as a watchmaker.

The Blue thus became the first watch he built from scratch, as his mentor Daniels had taught him. In the video below, Roger outlines how he started working for George, before going on to discuss the Blue and White tourbillon watches.

Neither the Blue nor the White has emerged publicly since they were delivered in 2007, until now. London-based independent watch dealer A Collected Man just revealed it brokered the sale of the Blue – directly from its original owner to a new home across the Atlantic – for a whopping £1.00 million, equivalent to US$1.31 million.

Both the Blue and the White were built as a result of a commission placed by the first owner of the Blue, an English software entrepreneur. He had approached Daniels for a tourbillon wristwatch sometime in 2000, a request the watchmaker acceded to, but with the condition he would produce two examples in order to amortise the development cost.

By mid 2001, the outline of the project had been agreed upon, with Daniels also having lined up a buyer for the second tourbillon wristwatch, which would later be christened the White. The Blue gets its name from the blued steel baton hour markers, matched with blue steel hands; conversely, the White has white gold markers with blued steel hands. 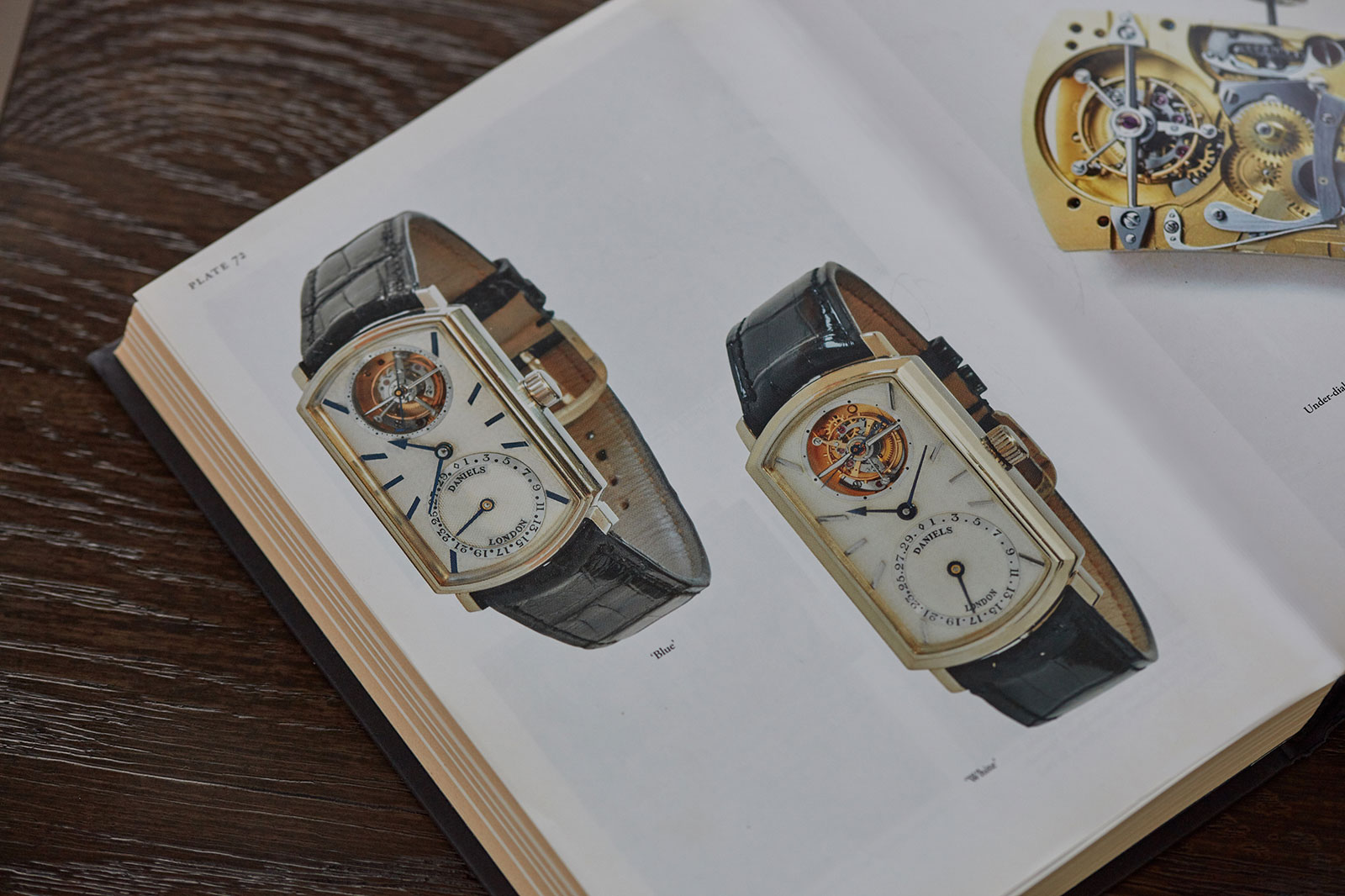 The Blue and White pictured in Daniels’ autobiography, All in Good Time: Reflections of a Watchmaker But aesthetic differences aside, the Blue and the White are fundamentally identical, just as Daniels had envisioned, powered by the same movement featuring a one-minute tourbillon regulator – with a co-axial escapement – and a pointer-date display. Visually, neither watch looks like a typical Daniels in form, although the Daniels details are evident in the engine-turned dial.

They have an elongated, rectangular case with rounded ends that might be described as a tonneau, but is also slightly reminiscent of the Daniel Roth double-ellipse case. Described by Roger as “a real step out for [Daniels]”, the uncommon case shape was the result of Daniels wanting to build a more contemporary watch, in contrast to his earlier works, which were all conventionally round. 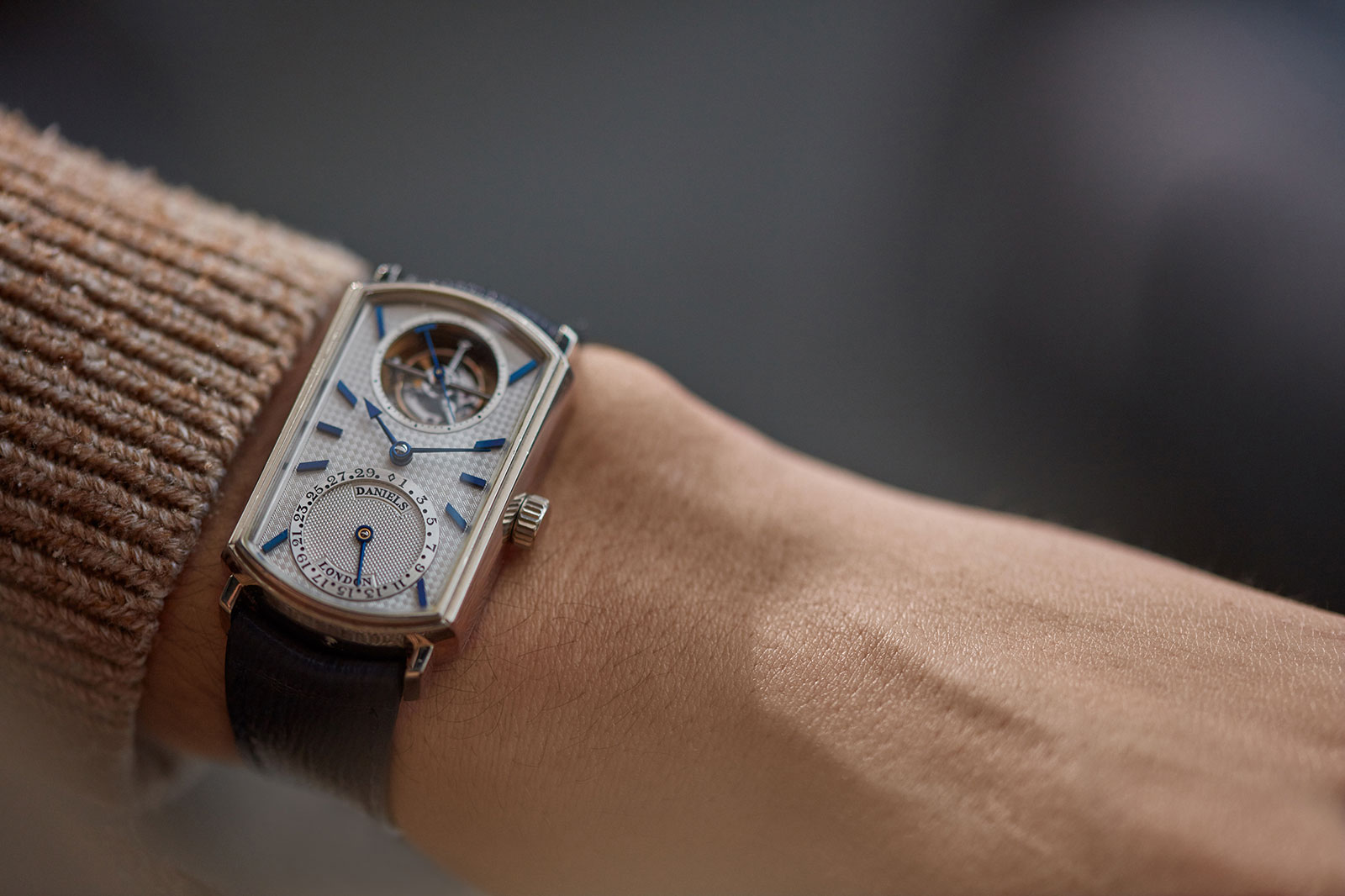 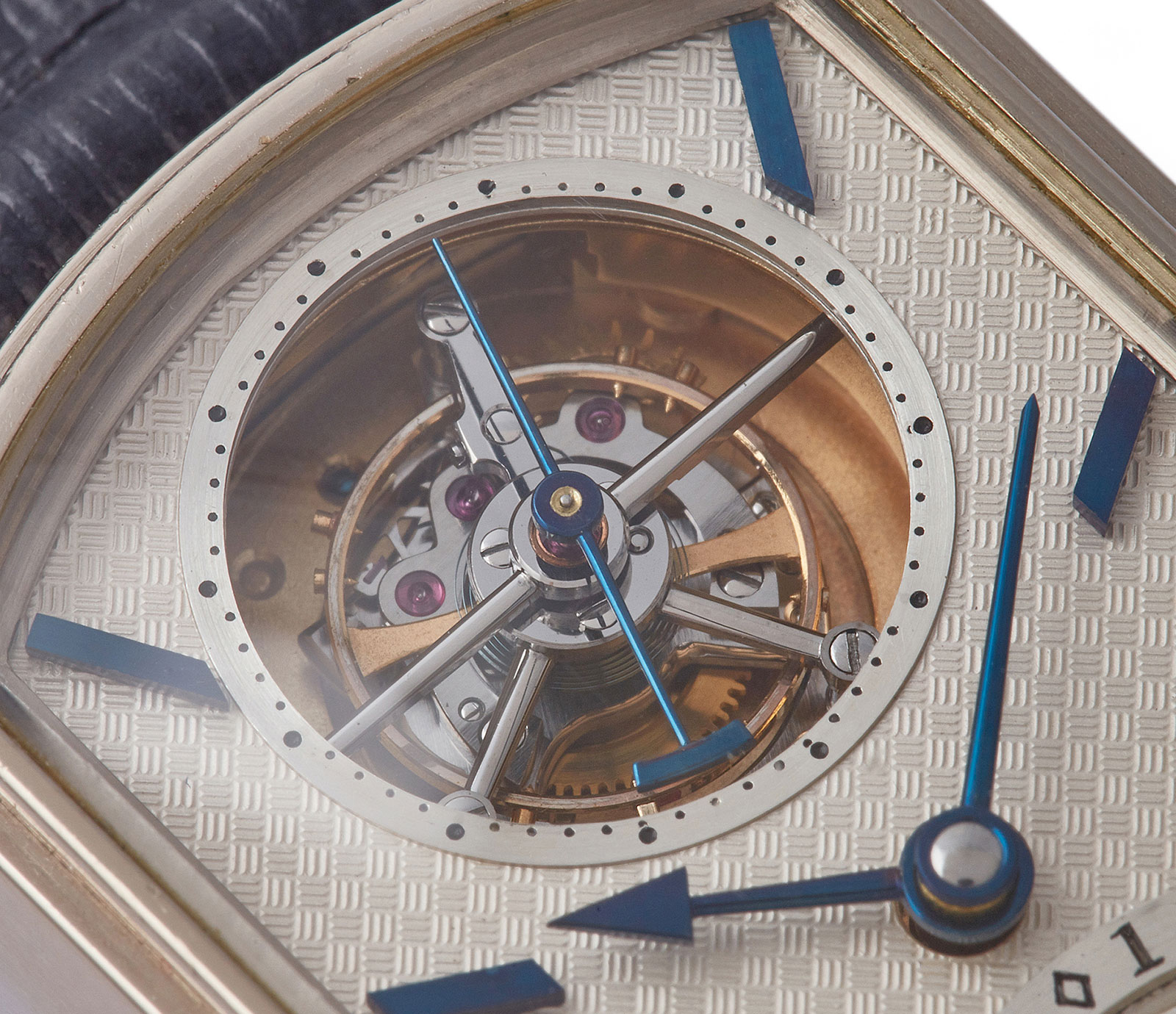 The Blue is succinctly described by Daniels himself, who wrote on its certificate: “One minute tourbillon wrist watch with Daniels Co Axial escapement, free sprung balance with adjustable timing screws, carriage visible in the dial aperture. Dial with guillochet [sic] ground with blued steel batons and hands, signed DANIELS LONDON. The 18k white gold case and buckle assayed in London.”

Besides the atypical case shape, the Blue is also significant in another way – it was the first and only of Daniels’ hand-made watches cased in white gold, with the rest being in traditional yellow gold (the Millenniums and Anniversaries were made in white gold, but were serially produced watches). 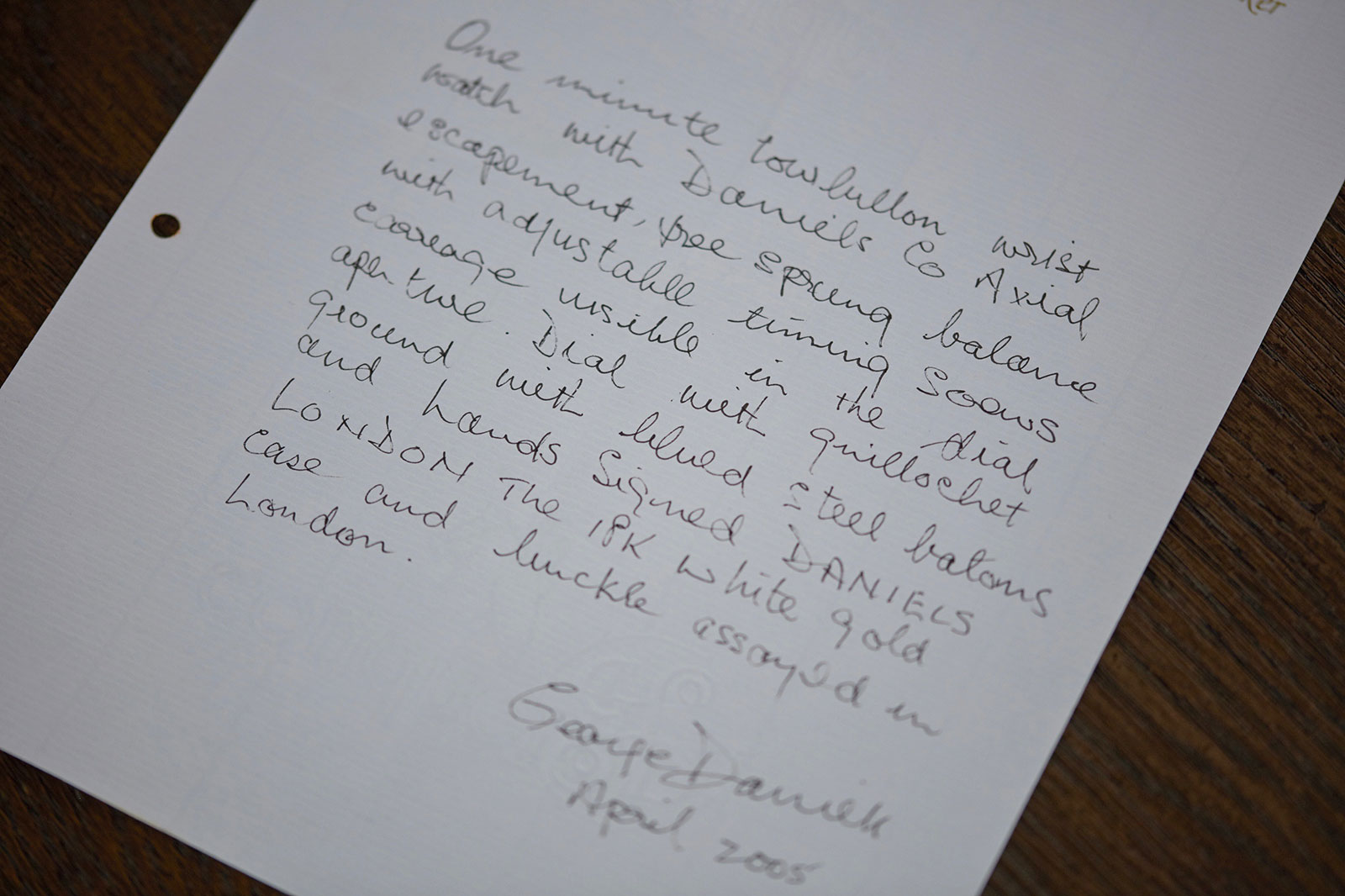 The hand-written certificate of the Blue 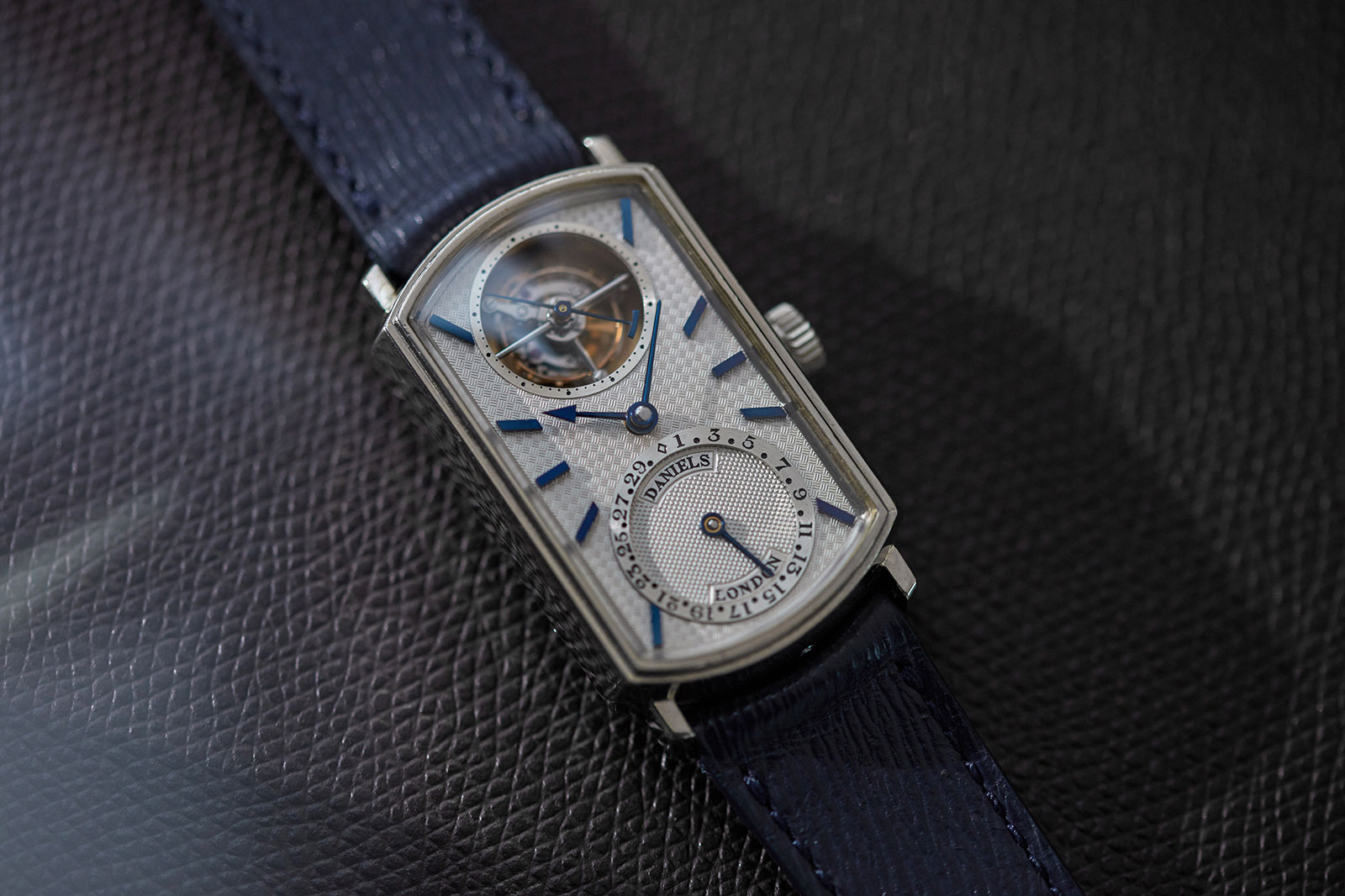 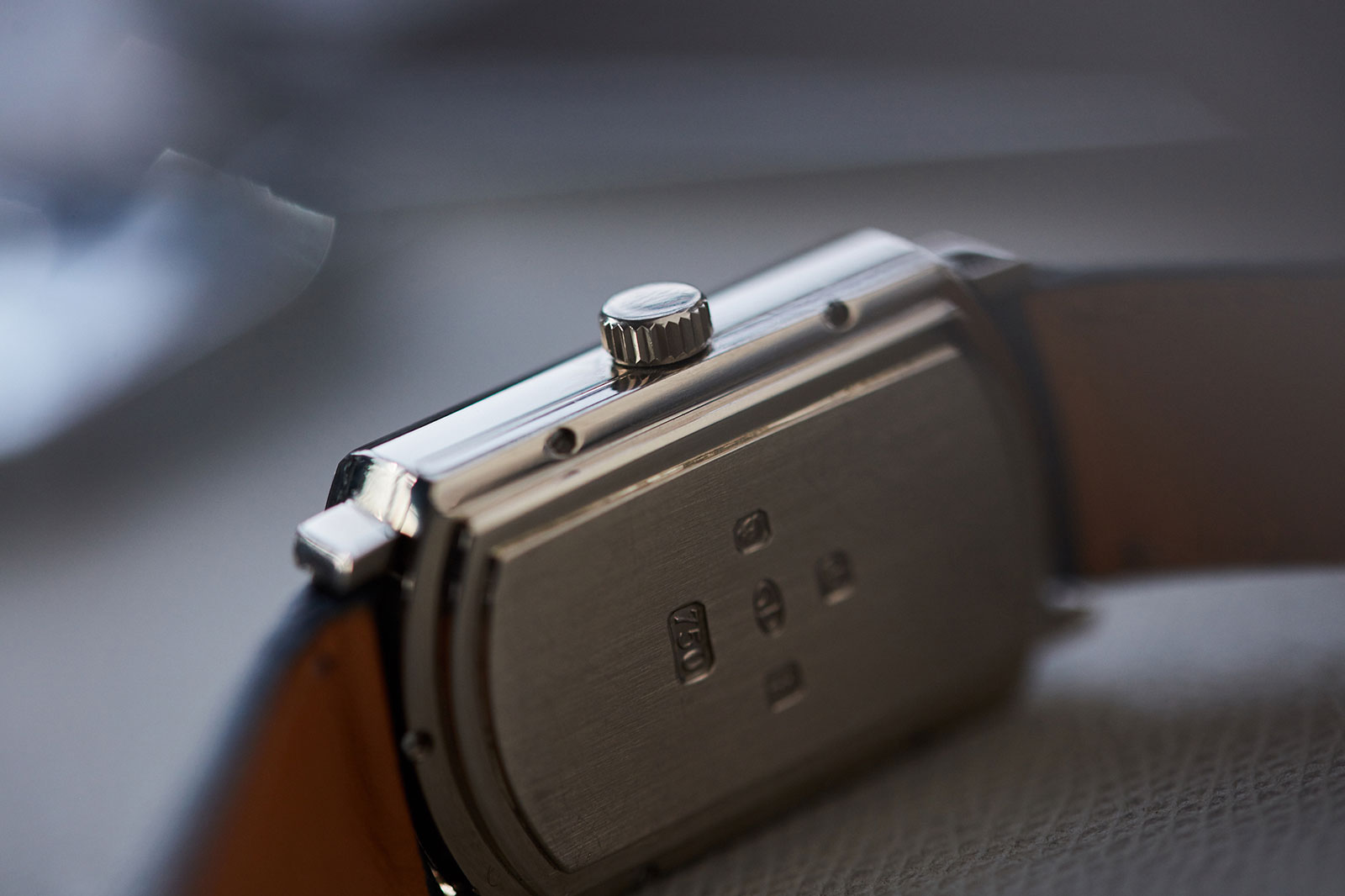 The London assay marks on the back of the Blue

When alive, Daniels was rightly regarded as a truly great horologist; Francois-Paul Journe often cites Daniels as an inspiration. But barely a decade after this passing, Daniels has been elevated into legend, as evidenced by the steady, upward climb in the value of his watches. The Blue cost the original owner £40,000 in 2005 – a laughably small sum in hindsight – and 14 years later has sold for £1.00 million, a 25-fold increase.

All photos courtesy of A Collected Man.

The one and only, for now.