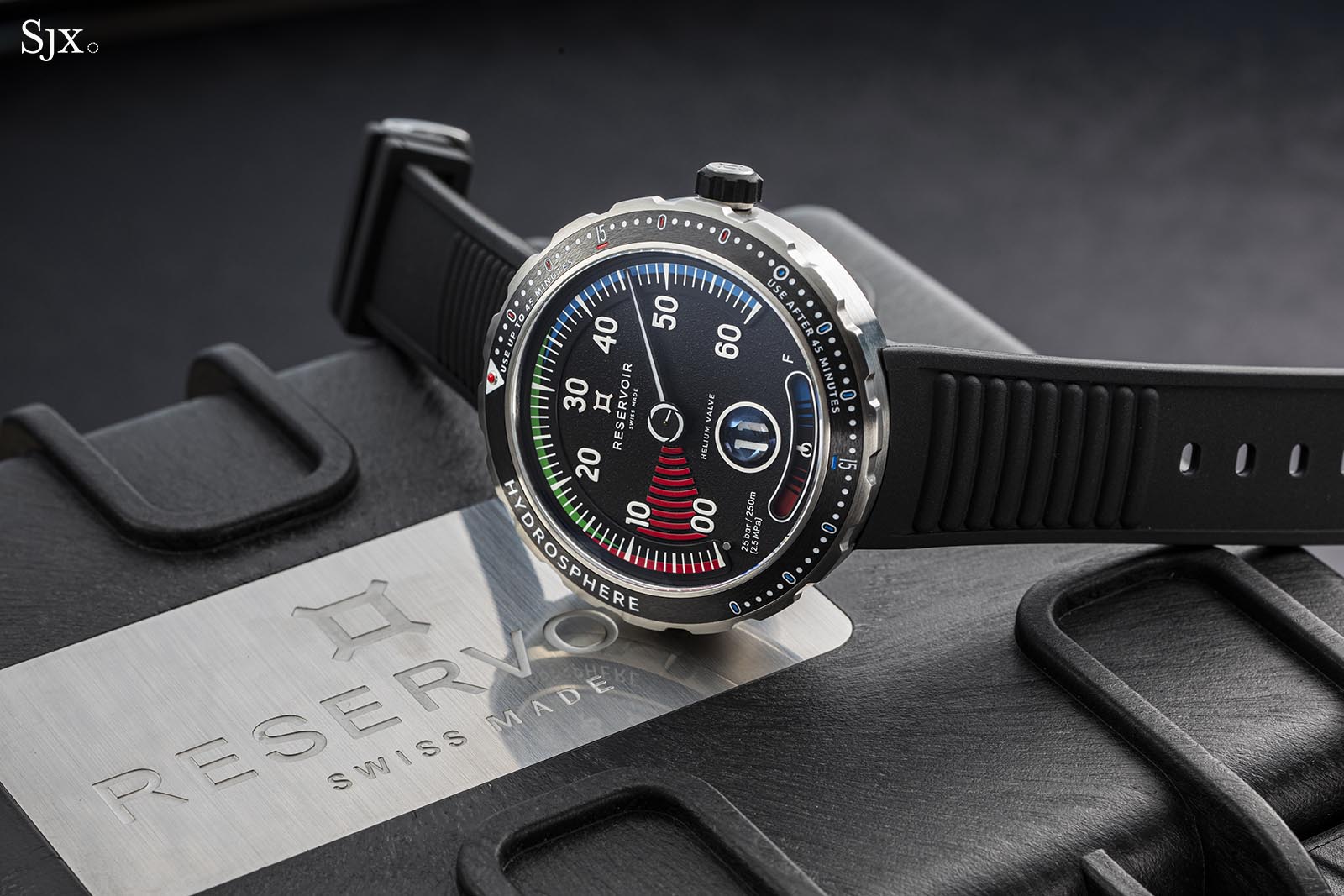 Reservoir focuses on a single type of instrument-inspired wristwatch – a jumping-hour and retrograde minute powered by a proprietary module – executed in several variations, all accessibly priced. The watches offer a lot of complication for relatively little money; the base models start at around US$4000.

Swiss-made watches with unconventional time displays are relatively uncommon in the sub-$5000 price range, let alone one with a digital hours and retrograde minutes. All of Reservoir’s watches are powered by the same proprietary movement – an ETA 2824-2 combined with a patented module developed by Télôs Watch, a complication specialist in La Chaux-de-Fonds, perhaps best known for the Harry Winston Opus 14. Reservoir is headquartered in Paris, but the watches are Swiss made; assembly and testing is also done by Telos.

And earlier this year, Reservoir entered one of the most populous segments in watchmaking, by installing the movement inside a dive watch – the Hydrosphere.

The Hydrosphere is an extremely unique and compelling proposition: a solid, purpose-built dive watch that features the brand’s signature jumping hour and retrograde minutes. It’s the first dive watch with this complication, and is priced at just US$4300. 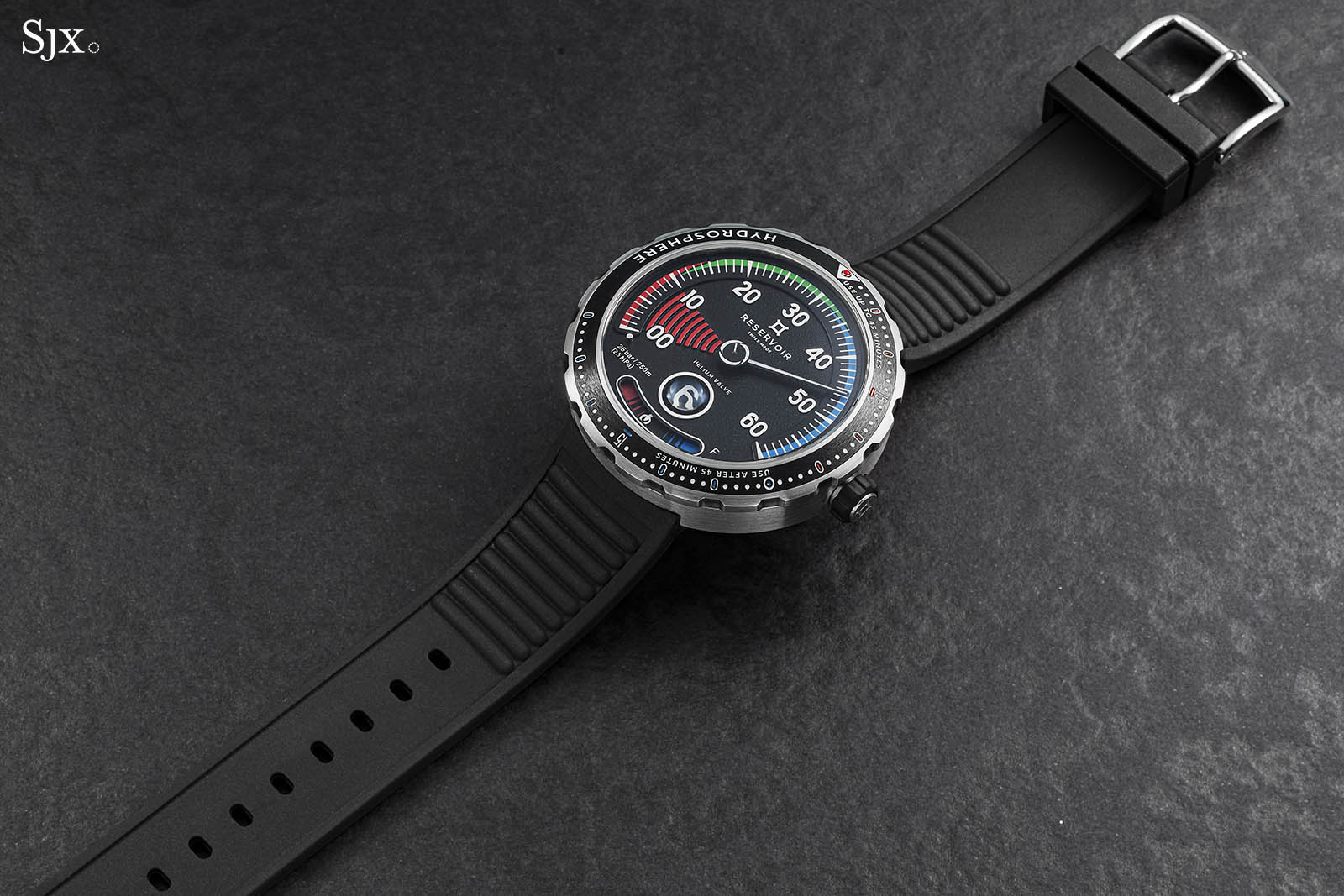 Each iteration of the dial is nuanced in design, making reference to the overall theme of each collection. While the other models are modelled on aircraft and automobile instrument panels, the Hydrosphere dial was modelled on a scuba diving pressure gauge – which conveniently has a retrograde display. In terms of achieving its goal of looking like a depth gauge, the Hydrosphere succeeds magnificently; it genuinely looks like a diving instrument. 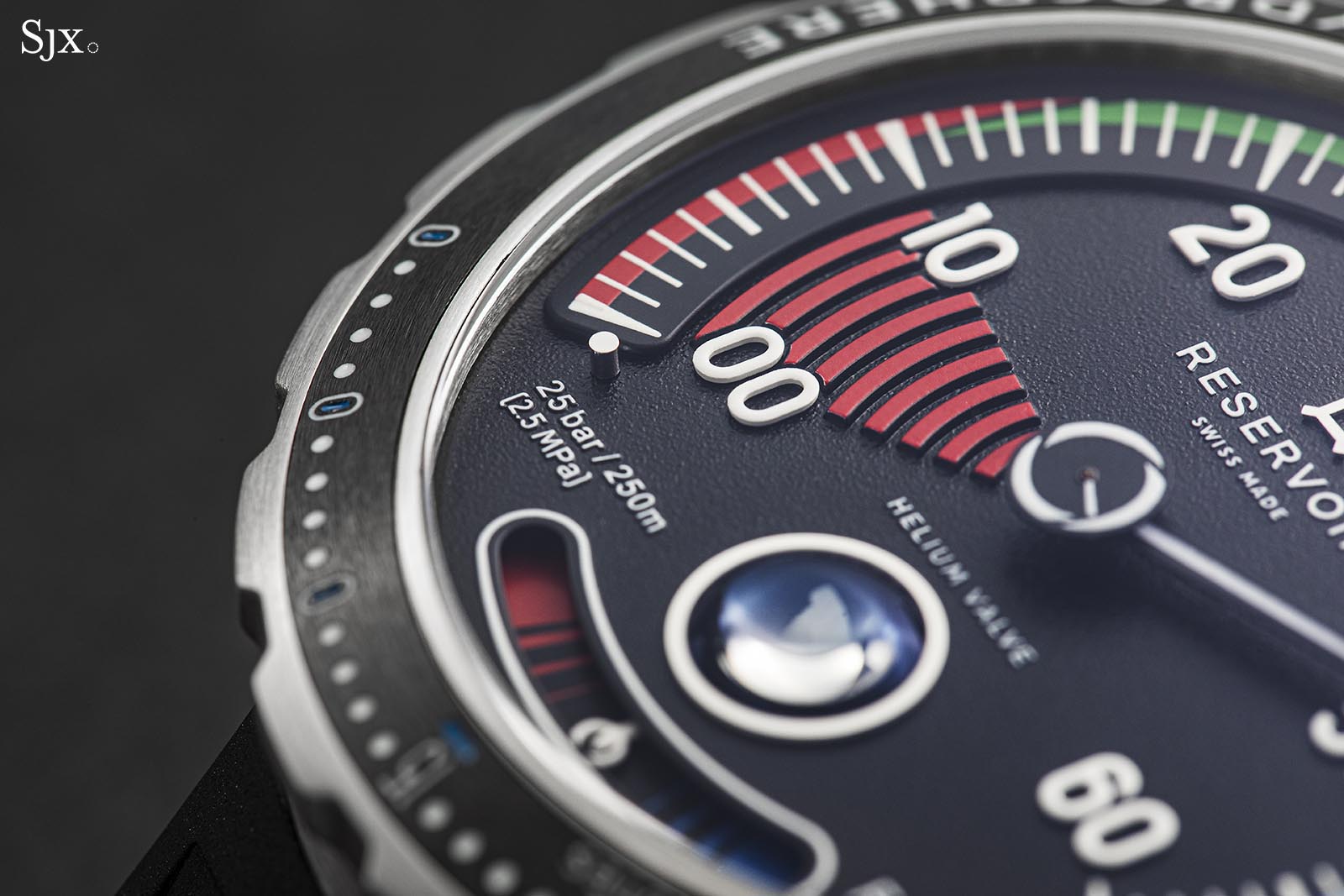 The time display is, in fact, particularly suited for a dive watch, as it is an excellent way of distinguishing the minutes from the hours, a useful feature since only minutes matter to a diver.

The retrograde minutes is indicated by a lone hand that spans two thirds of the dial, while the jumping hour window sits just below the central axis. Because of the nature of the time display module, the jump hour disc sits far below the dial. Though the jump hour display is topped by a magnifying glass to boost its readability, the dial still has to be read straight-on for the hour numeral to be fully legible.

Below the hour window is the power reserve indicator that relies on a white pointer to indicate the state of wind.

Though the dial lacks a conventional seconds hand – measurement of seconds is irrelevant on a dive – it has an “operation indicator”, essentially a small disc that replaces the seconds hand. The rotation of the disc indicates that the watch is running, a crucial feature in a dive watch. 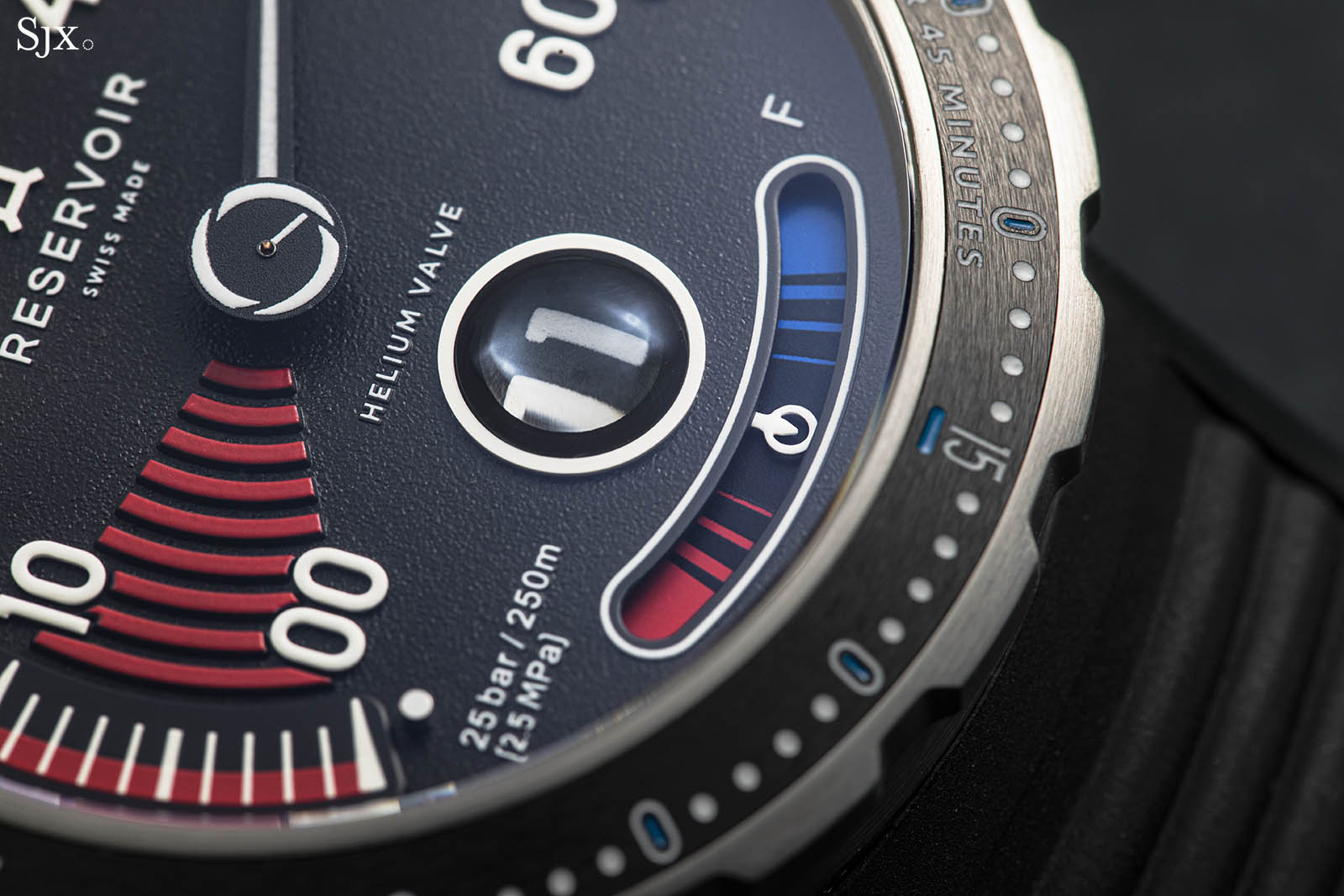 The Hydrosphere is available with three dial types: the Blue Hole in blue, the Air Gauge in white, and the  Blackfin with a matte black, grained dial that’s pictured here.

On the black and blue dials, the minute numerals are all applied and coated with SuperLuminova , while the white version features a fully luminous dial. 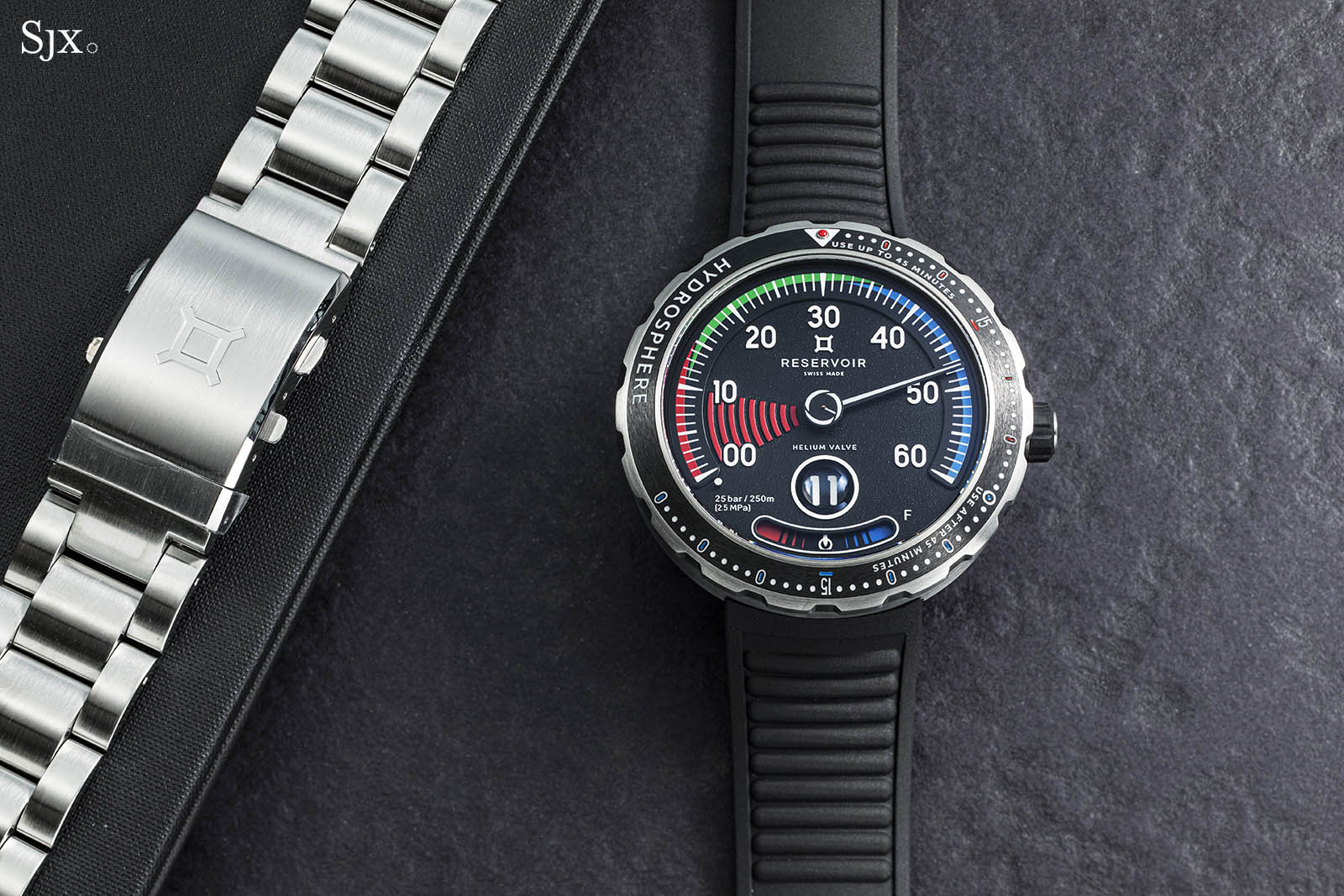 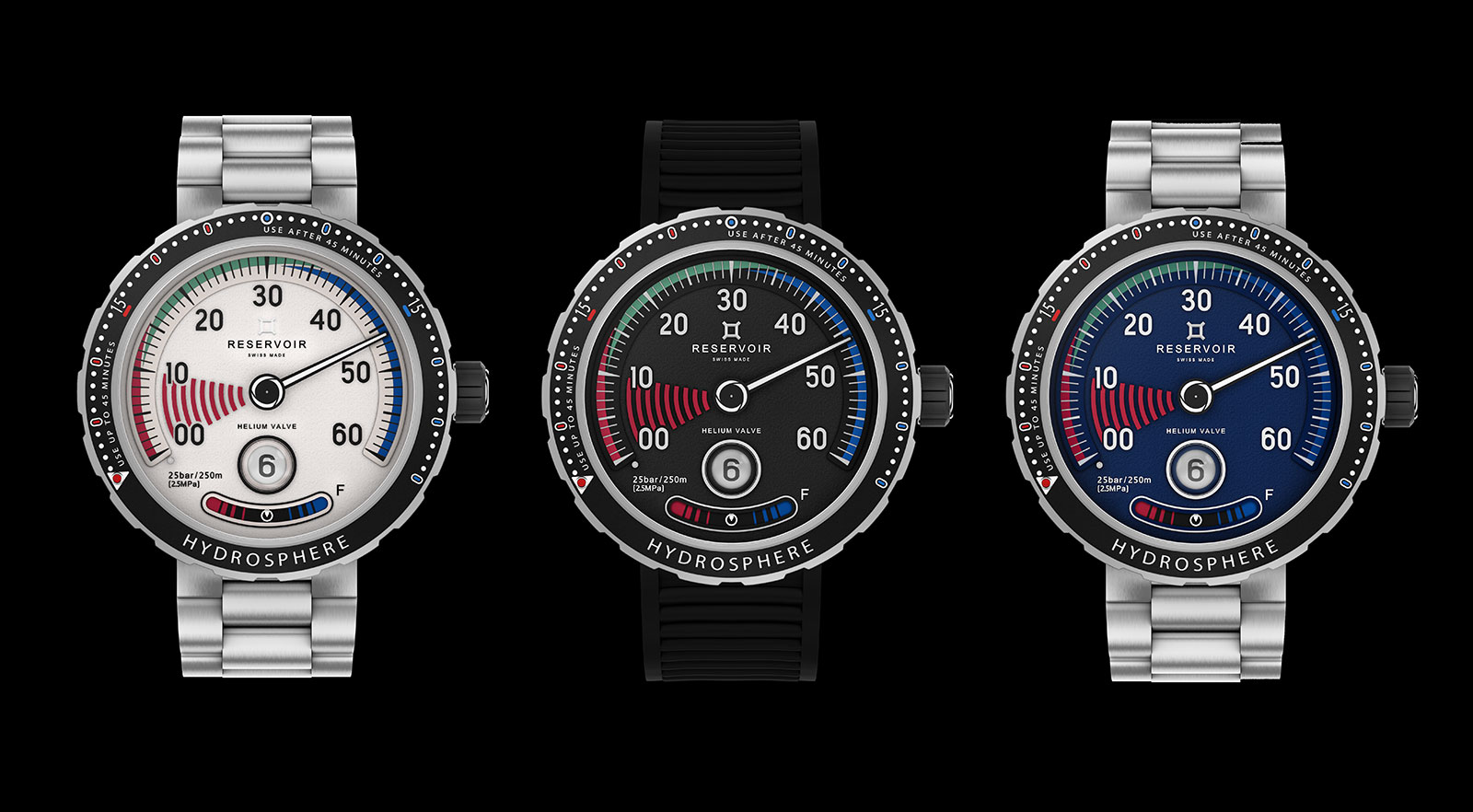 Resembling a hockey puck, the stainless-steel case of the Hydrosphere has both a screw-down crown and case back, with a 250m depth rating.

Though the case is huge – it measures 45mm wide – its lug-less design with the strap integrated into the case means the case sits a lot smaller on the wrist than the dimensions imply. It is surprisingly wearable, albeit heavy.

And unlike other Reservoir watches, the case of the Hydrosphere has a brushed finish, giving it a more industrial appearance that’s entirely appropriate for the design and function. 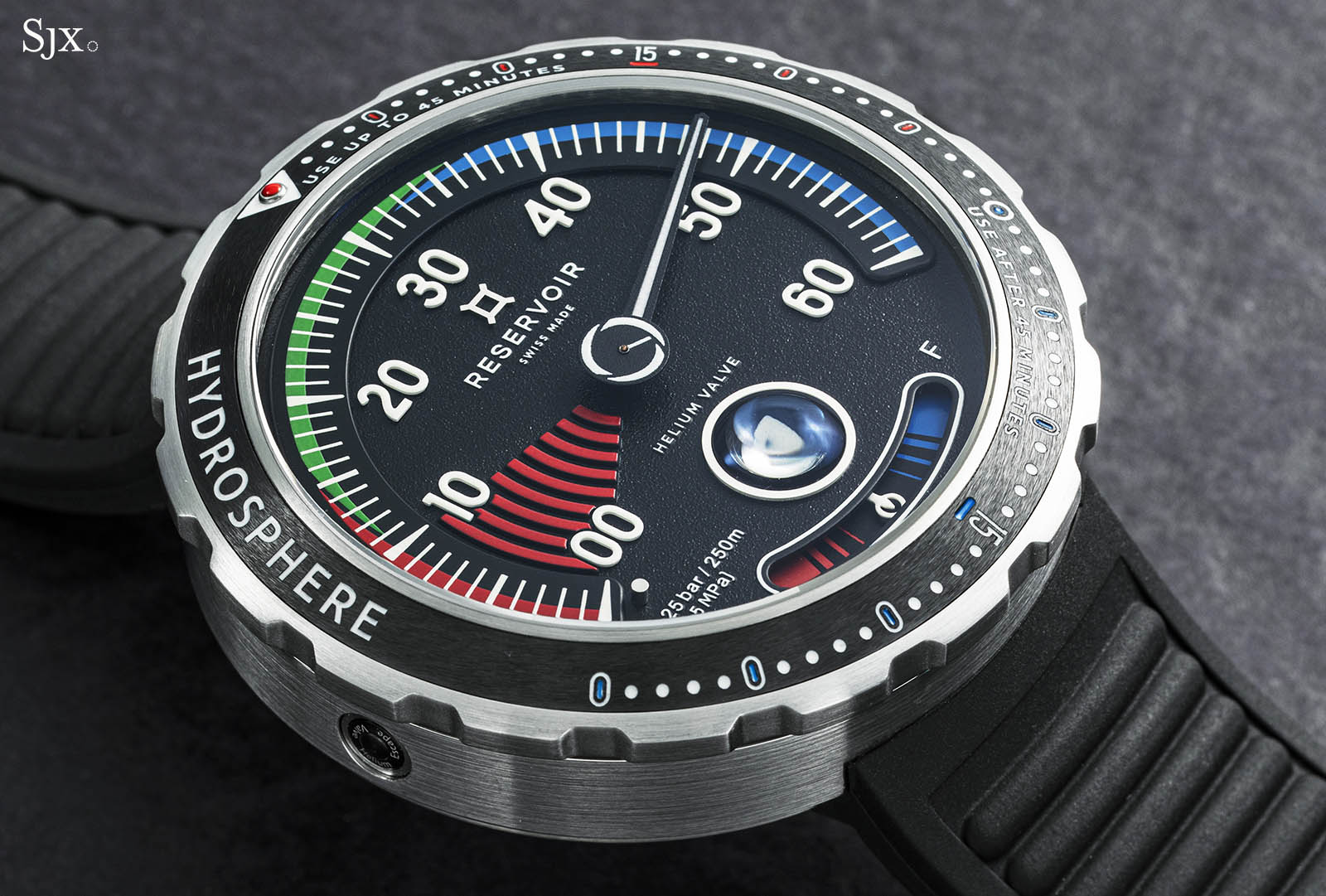 It’s equipped with a unidirectional rotating bezel with a grooved edge, and a crown that’s rubber-coated to ensure optimum grip with wet or gloved fingers. Most unusual is the brushed ceramic insert, which has been cleverly designed with twin scales to accommodate the retrograde minute hand.

First the bezel has to be rotated to line up the triangle marking to the minute hand, after which the scales can be used to measure elapsed dive time before 45 minutes; once it passes 45 minutes, the bezel is rotated once again to use the second scale. The case also incorporates a helium escape valve at nine o’clock, a frequent feature of dive watches but probably superfluous in this case (no pun intended).

A helium escape valve is a one-way valve that comprises of a spring, plug and rubber gasket. It releases the helium that accumulates inside the watch case during saturation diving; not likely the purpose for this leisure diver. 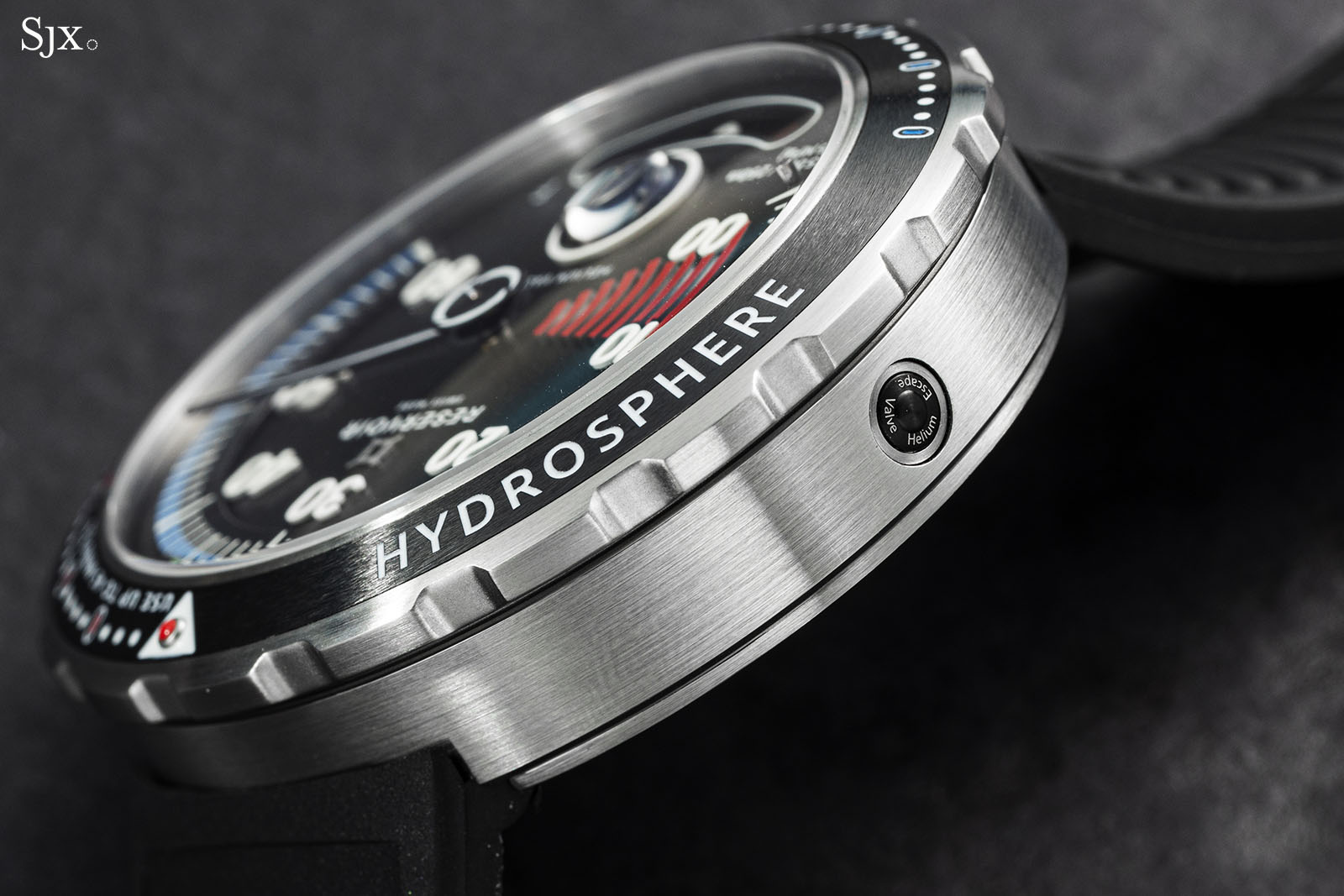 The Hydrosphere is sold with both a bracelet and rubber strap. It looks better, and also wears better on the strap; the bracelet is solidly built but results in a watch that’s too heavy.

The watch is accompanied with a bracelet and a rubber strap, both of which are secured with screws

The movement inside is an automatic ETA 2824-2 topped by the proprietary module made by Télôs Watch for Reservoir. As a result of the module, the usual 38-hour power reserve of the ETA 2824-2 drops an hour to 37 hours, an impressively small concession in the grand scheme of things.

The module alone consists of 124 parts and 10 jewels, which is a substantial amount of exotic tech for an affordable watch.

The retrograde mechanism is driven by a pretty standard, snail cam-actuated mechanism in which a spring-loaded lever is connected to a fan-shaped rack that is in turn driven by the minutes pinion. The spring gradually charges over an hour and is released precisely every 60 minutes, facilitating a reverse motion.

While this is the default construction for such a display, it is still technically accomplished for what the watch costs. And the retrograde display is also slightly fancier than the norm; it spans 240-degrees, rather than the more common 180 degrees or less. Also of note is the robust nature of the module: it incorporates a patented security mechanism that allows the retrograde minute hand to be set backwards without damaging the mechanism.

When it comes to dive watches, most brands tend to push boundaries in terms of depth and function, but rarely in terms of design and almost never in terms of mechanical innovation. The Reservoir Hydrosphere is a singular proposition in the sea of dive watches, with an uncommon complication that doesn’t at all detract from its core function, offering an unusual amount of exotic watchmaking for both its price and genre.

The Reservoir Hydrosphere is priced at US$4300 Swiss francs, or 5900 Singapore dollars. It’s already available from Reservoir and its retailers.