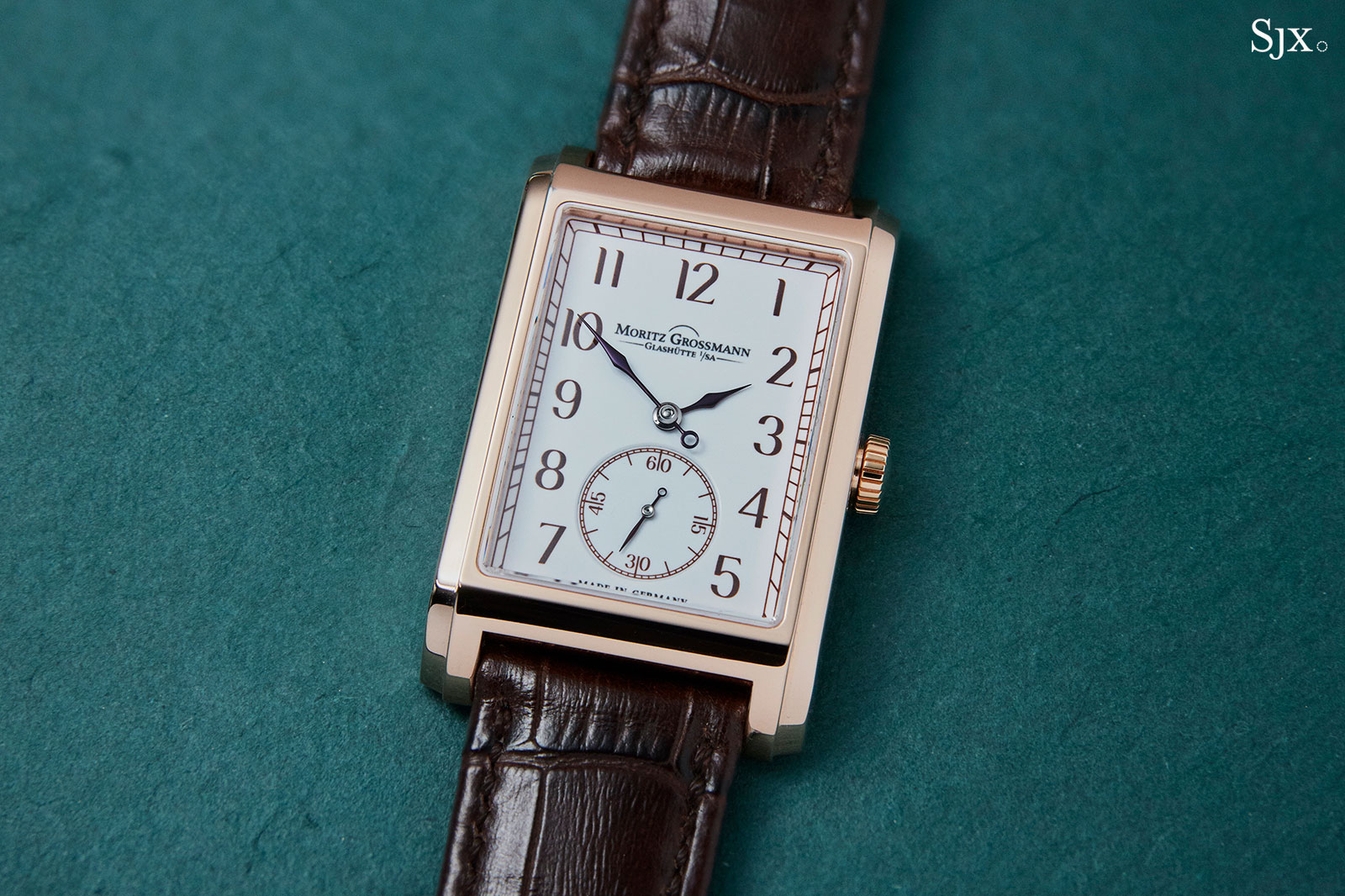 Moritz Grossmann was in the headlines recently for all the wrong reasons – yes, comically absurd indeed – which only distracts from the fundamental strength of the firm, which is exceptionally high quality movements. That’s exemplified by the Corner Stone, a form watch with a rectangular movement that is smartly constructed and gorgeously finished.

The German watchmaker’s round movements are all of notably high quality; the cal. 102.3 inside the Corner Stone translates that quality into a compact, rectangular space while retaining all of the flourishes and details. 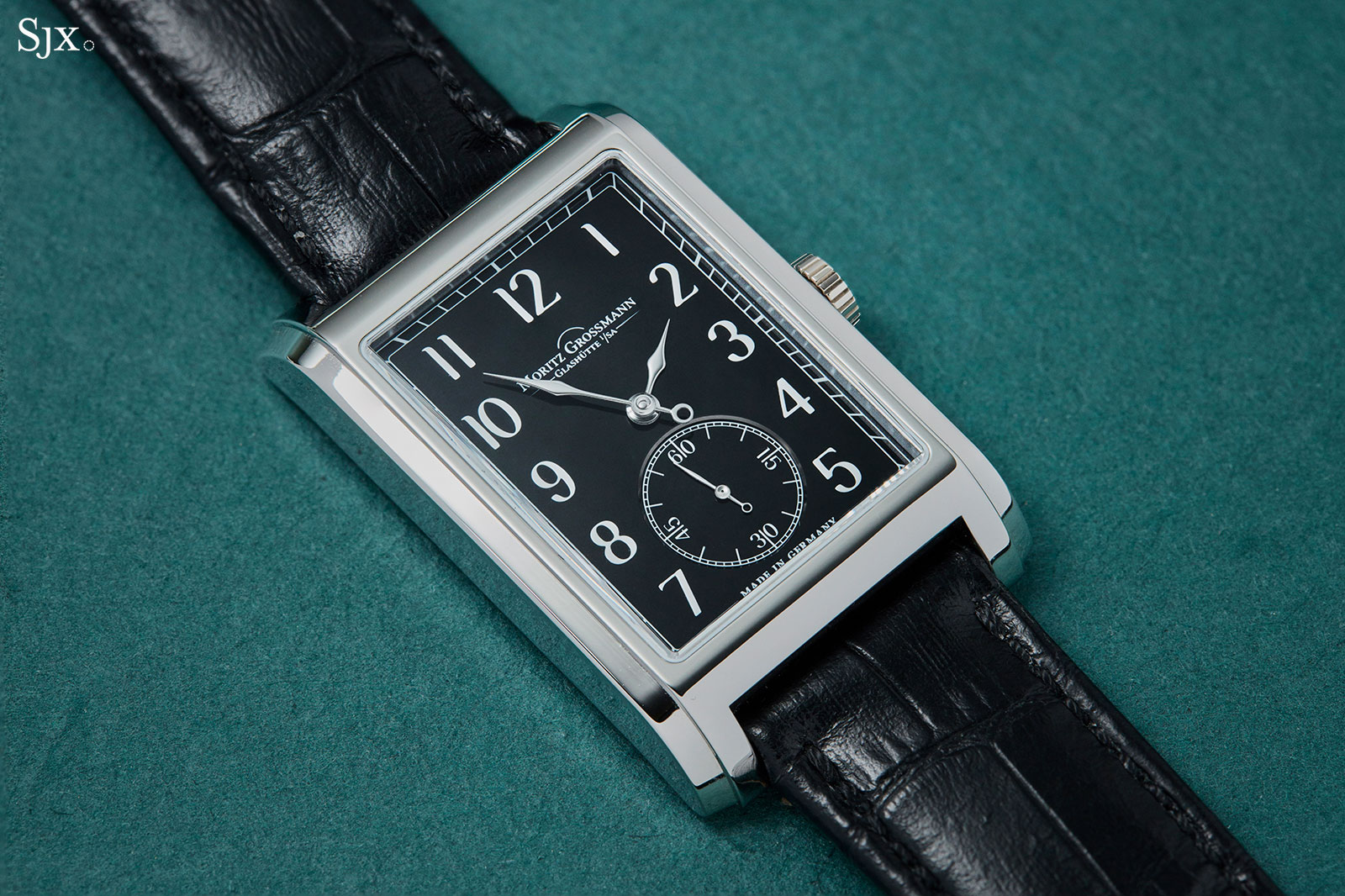 Movements built to suit the shape of the watch case are uncommon. Most watchmakers rely on smaller, conventional round movements for rectangular cases. German watchmakers are notable for being uncompromising in this regard. Fellow Glashütte-based brand A. Lange & Söhne once upon a time made several form movements, although most have been discontinued since rectangular watches generally don’t sell well.

The cal. 102.3 that powers the Corner Stone stands out for being newly developed and rectangular. Importantly, the calibre was developed from largely from the ground up, rather than being a round movement with its components rearranged.

It does share some components with the small movement, the cal. 102.1 found in the Benu 37 (formerly known as a Tefnut). The balance is the same 10mm wheel running at 21,600 beats per hour, while the winding click is similar though redesigned. 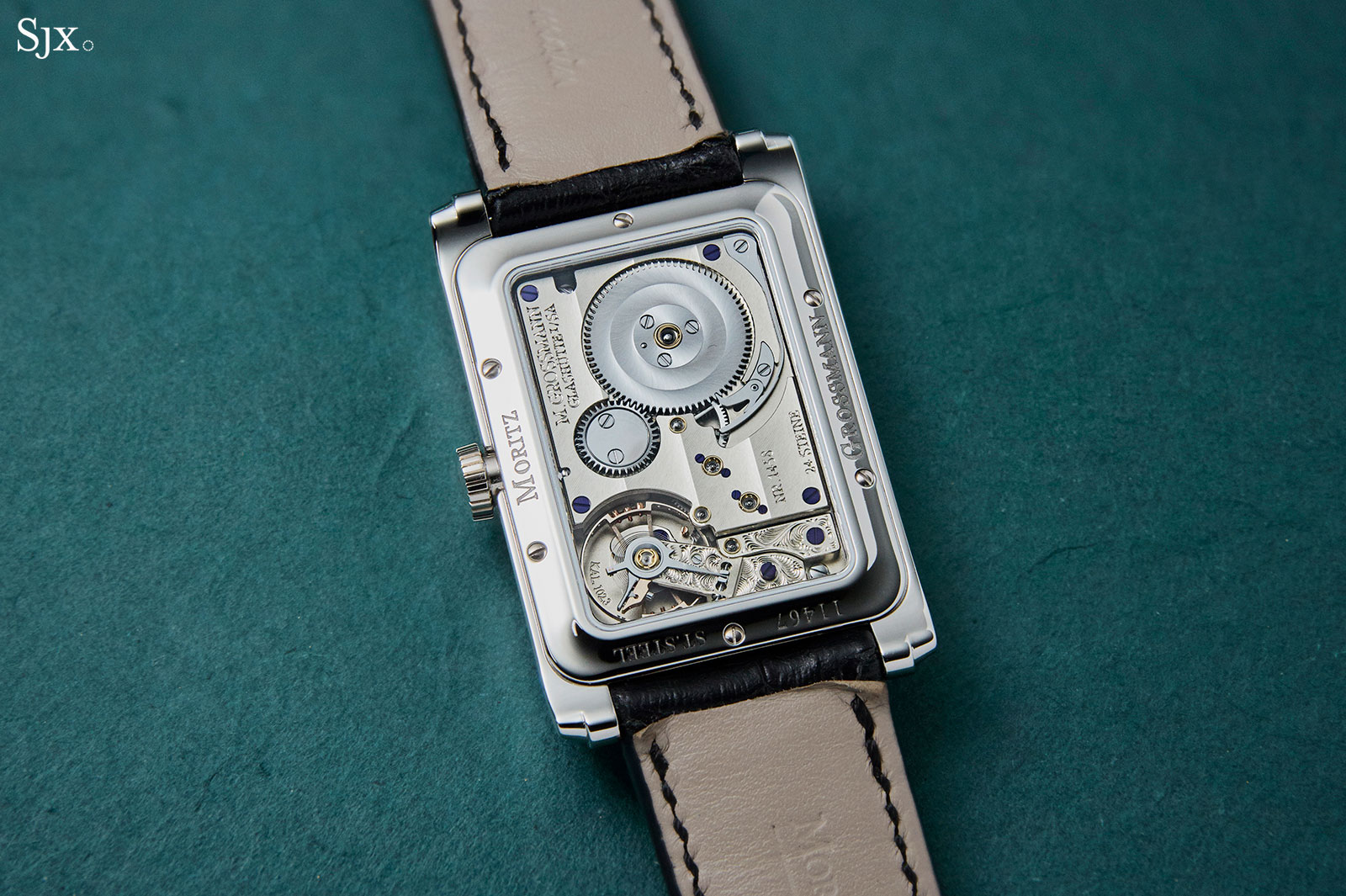 But it is enough of its own movement that the power reserve is substantially longer. The Corner Stone cal. 102.3 has a 60-hour power reserve, lengthy for a relatively small movement. By comparison, the cal. 102.1 will run for 48 hours on a full wind.

According to Moritz Grossmann, the long power reserve was one of the primary considerations when building the movement, particularly in relation to its small size. Hence extra large barrel that occupies a good third of the real estate within the movement.

It sits beneath the barrel ratchet wheel that’s decorated with a double solar graining, and next to that is the black polished crown wheel. Crucially, both wheels have polished teeth. Add to that the elaborate winding click, and the result is a beautiful construction made to fit a small space. 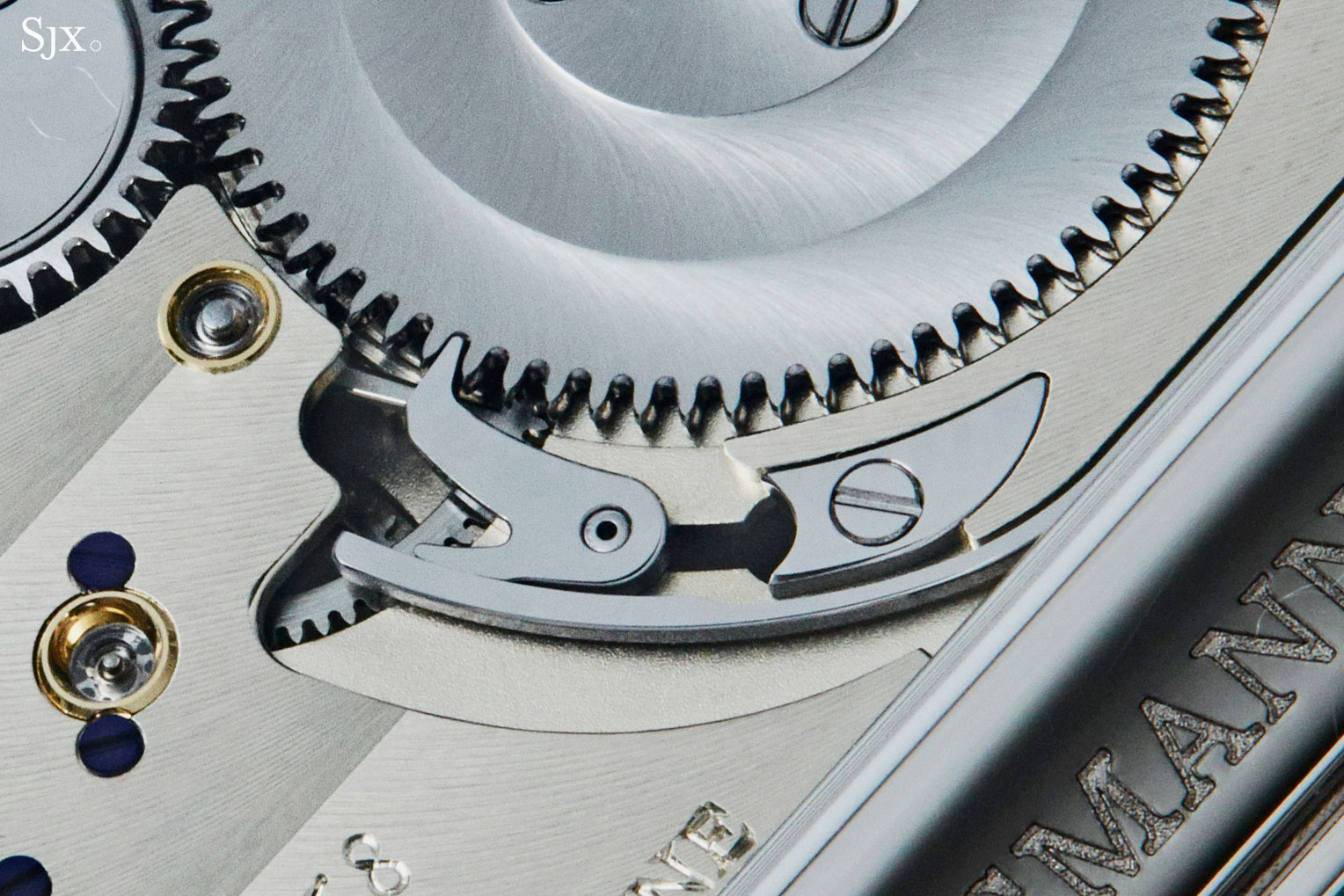 The rest of the movement features decoration typical of the brand. Both the balance and escape wheel cocks are finely hand-engraved, while the regulator index uses lateral, micrometer screw, once found on vintage pocket watch movements but today unique to Moritz Grossmann.

Also unique is the adjustable mass balance wheel that’s been cleverly designed with a recess to contain the regulating screws, maximising the diameter of the balance and consequently, its inertia. 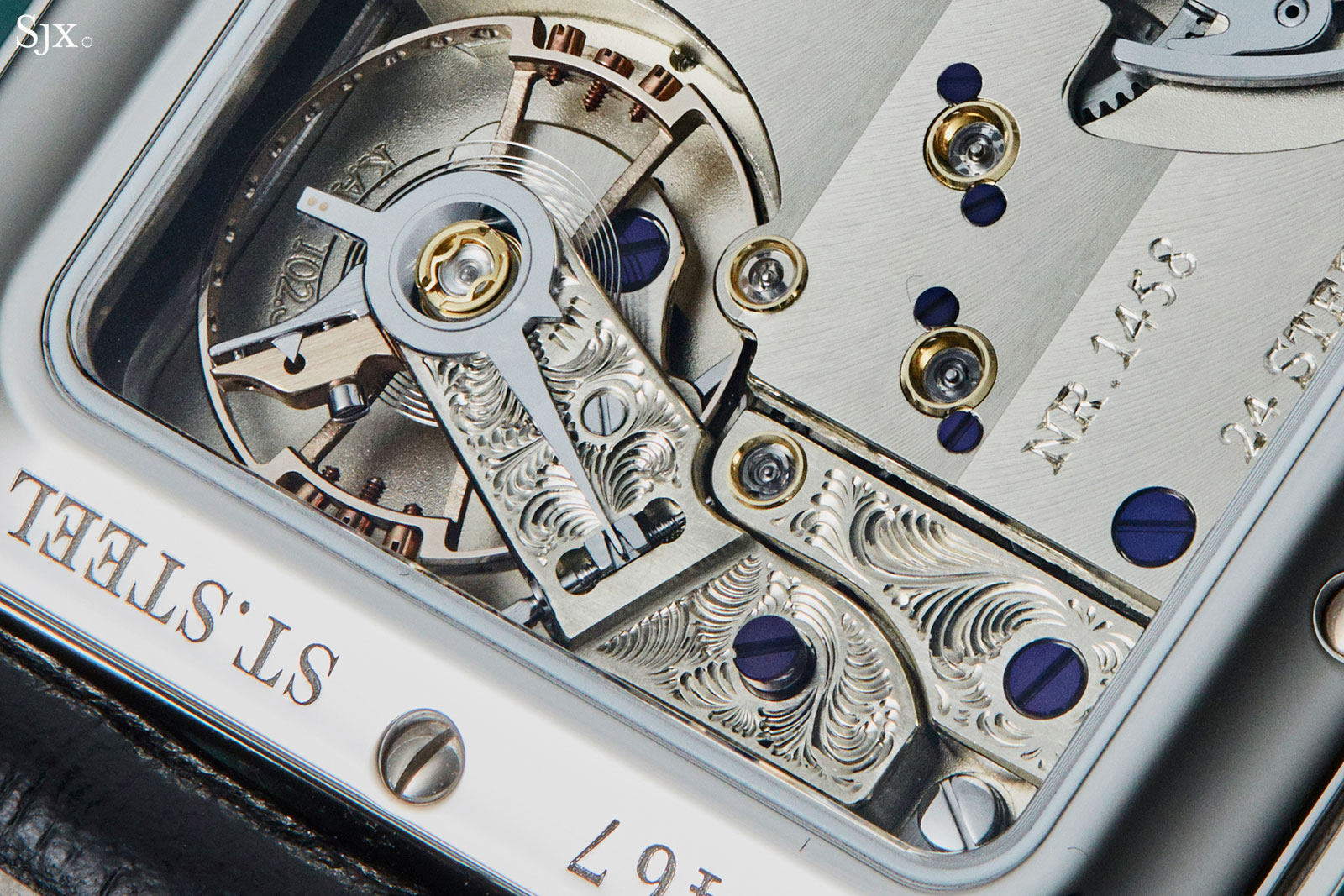 The movement uses clear jewels in its bearings, most of which are secured by gold chains

All the bridges and base plate are untreated German silver, with all the lettering, from the branding to the jewels, being hand-engraved. The degree of craft and attention paid to the movement is exceptional.

There is only one aspect that could be improved, and that is the rounded, inward angles on the three-quarter plate. A sharp inward angle would be preferable, although uncommon at this price point, being found mostly in the over-US$50,000 segment with the likes of Voutilainen and Akrivia. Rectangular watches mostly don’t sell well because, with the exception of Cartier’s designs, they generally feel chunky even when the case is small. And that is what the Corner Stone feels like.

The case form is simple, with a vague Art Deco style, being inspired by 1930s German watches. It measures 29.5mm in diameter and 46.6mm long, while the thickness is 9.76mm. The footprint on the wrist is small, but the straight sides and vertical flanks give it a blocky profile.

Of all the elements that make up the watch, the case is the least interesting. It is available only in 18k gold; the steel watch pictured is a prototype. 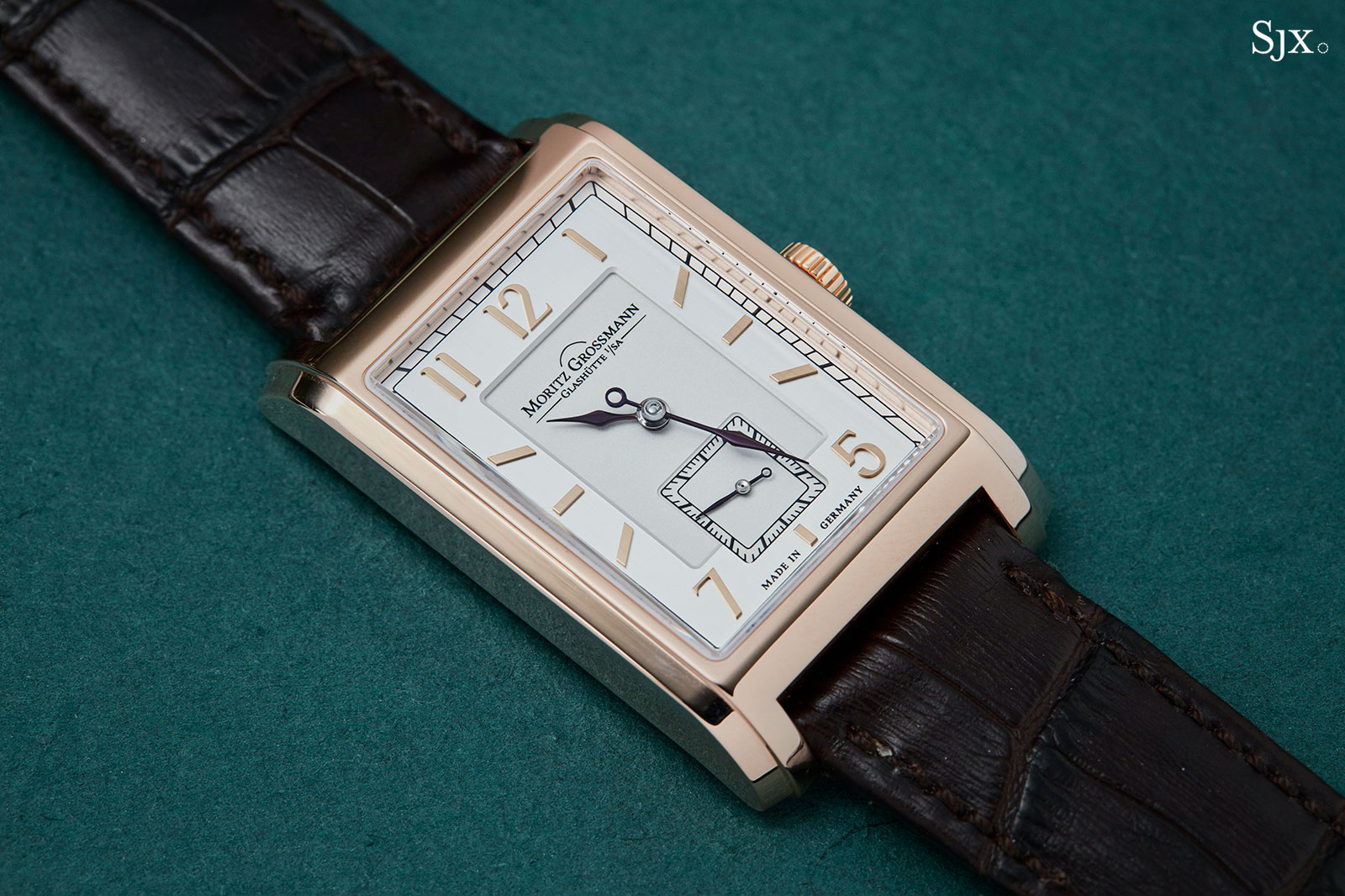 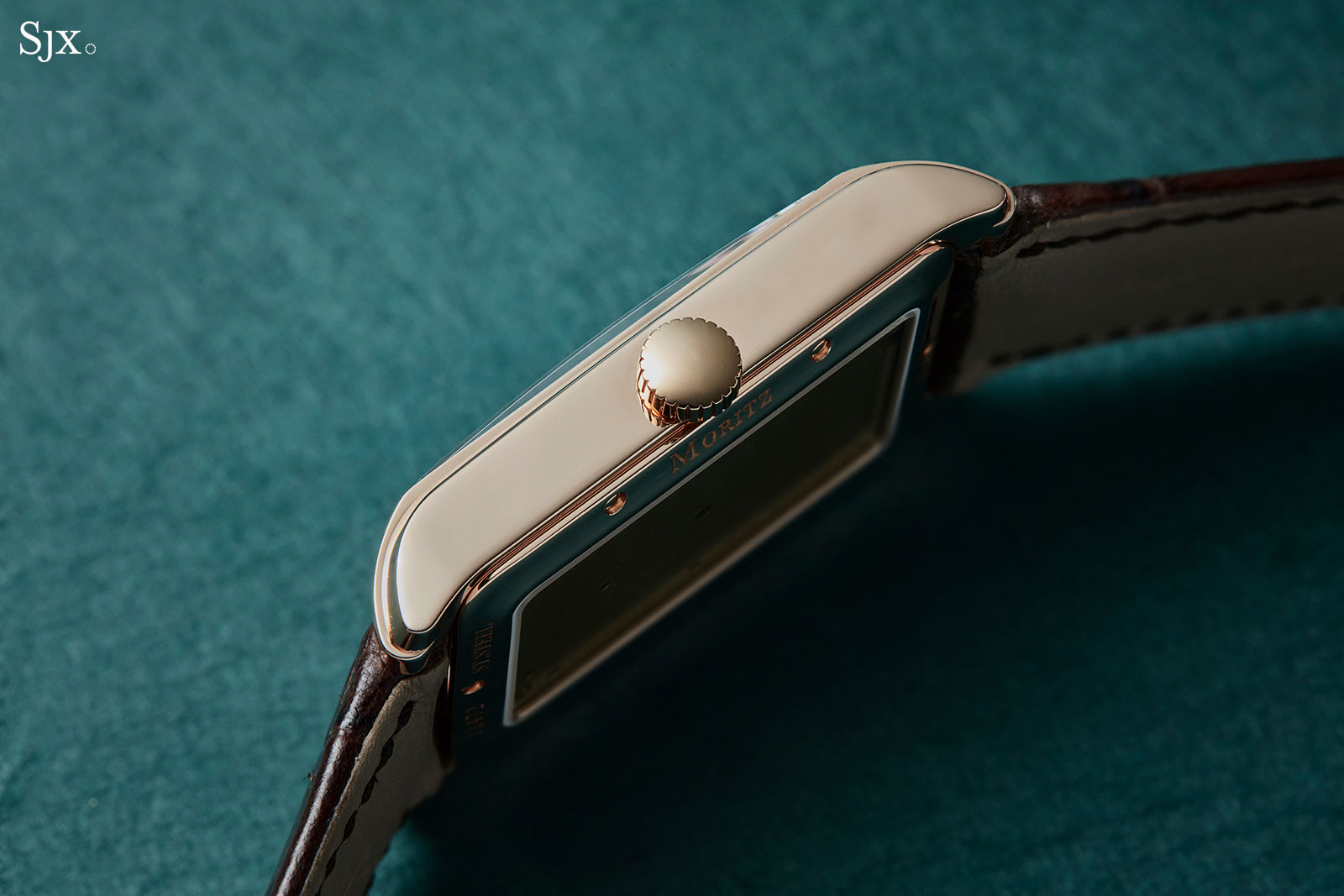 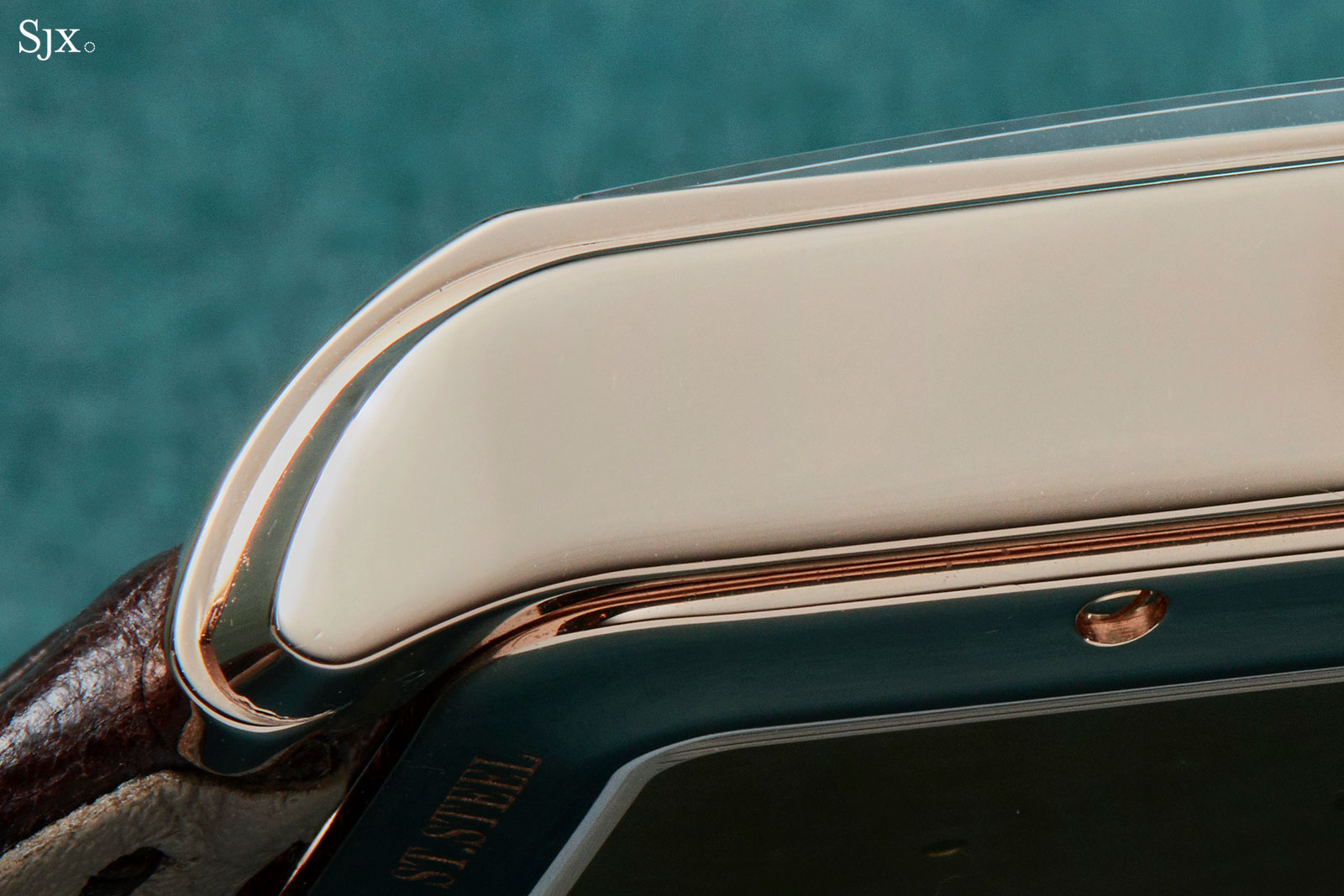 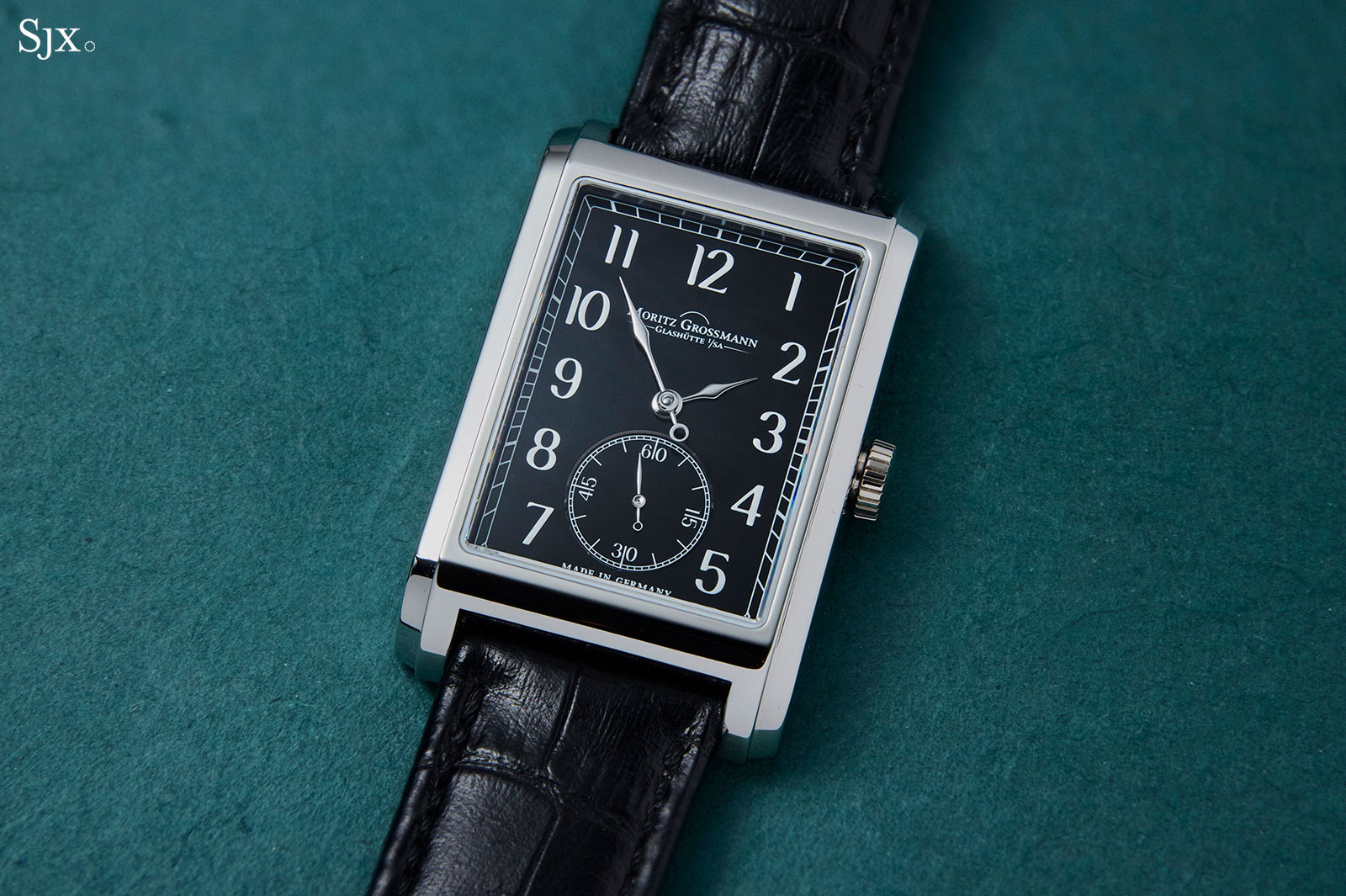 The version in white gold with a black lacquered dial looks the smallest on the wrist, but the dial, though glossy and stark, feels a bit flat. The best fit with the style of the case is the solid silver dial with applied markers, which works surprisingly well. Dials that combine both baton and Arabic numbers usually look peculiar, but this one comes together nicely. Tied in terms of appeal, but more intrinsically interesting is the fired enamel dial. It’s a two-parter, with the sunken subsidiary seconds being a separate disc that’s soldered to the main dial. 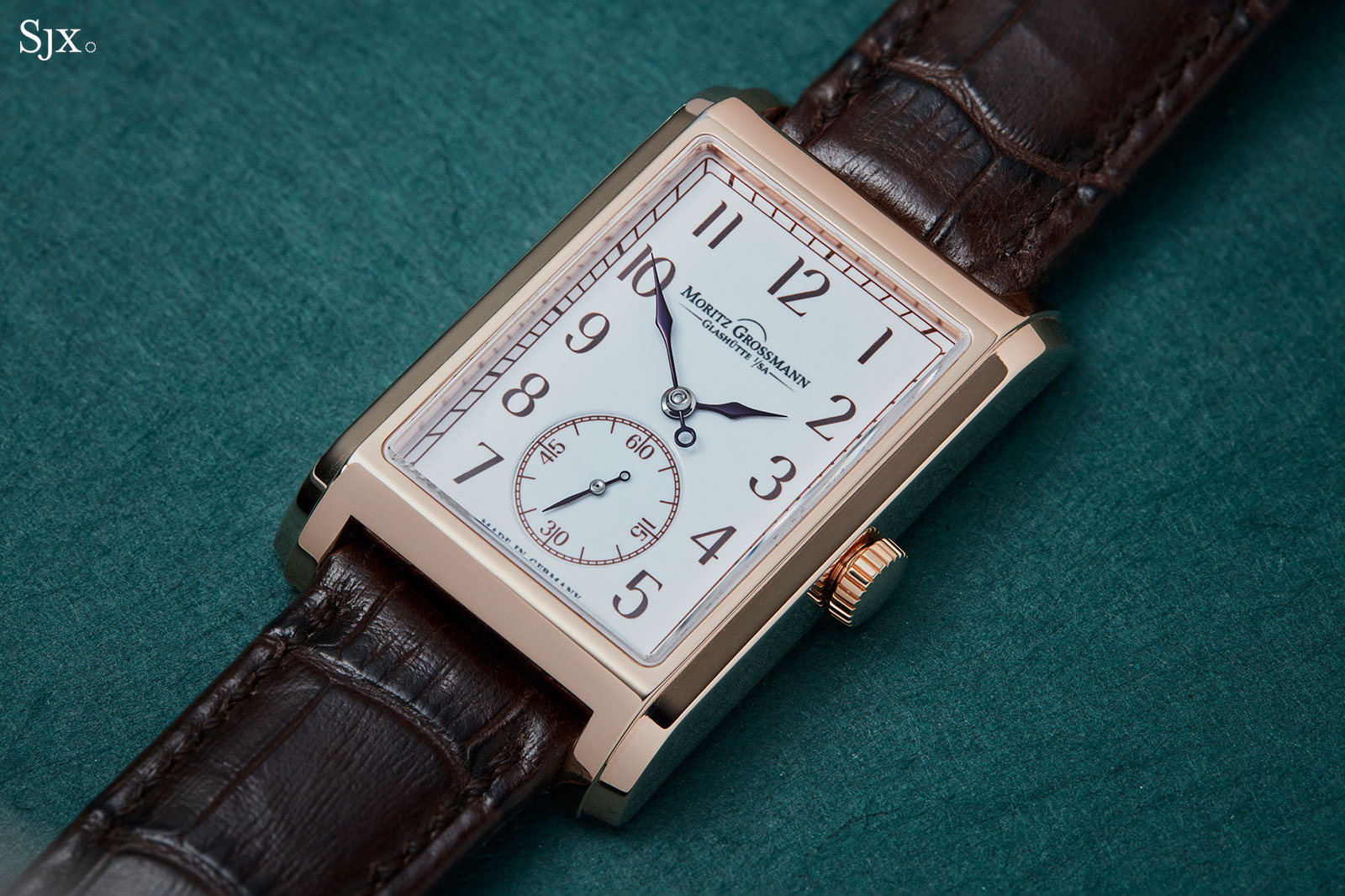 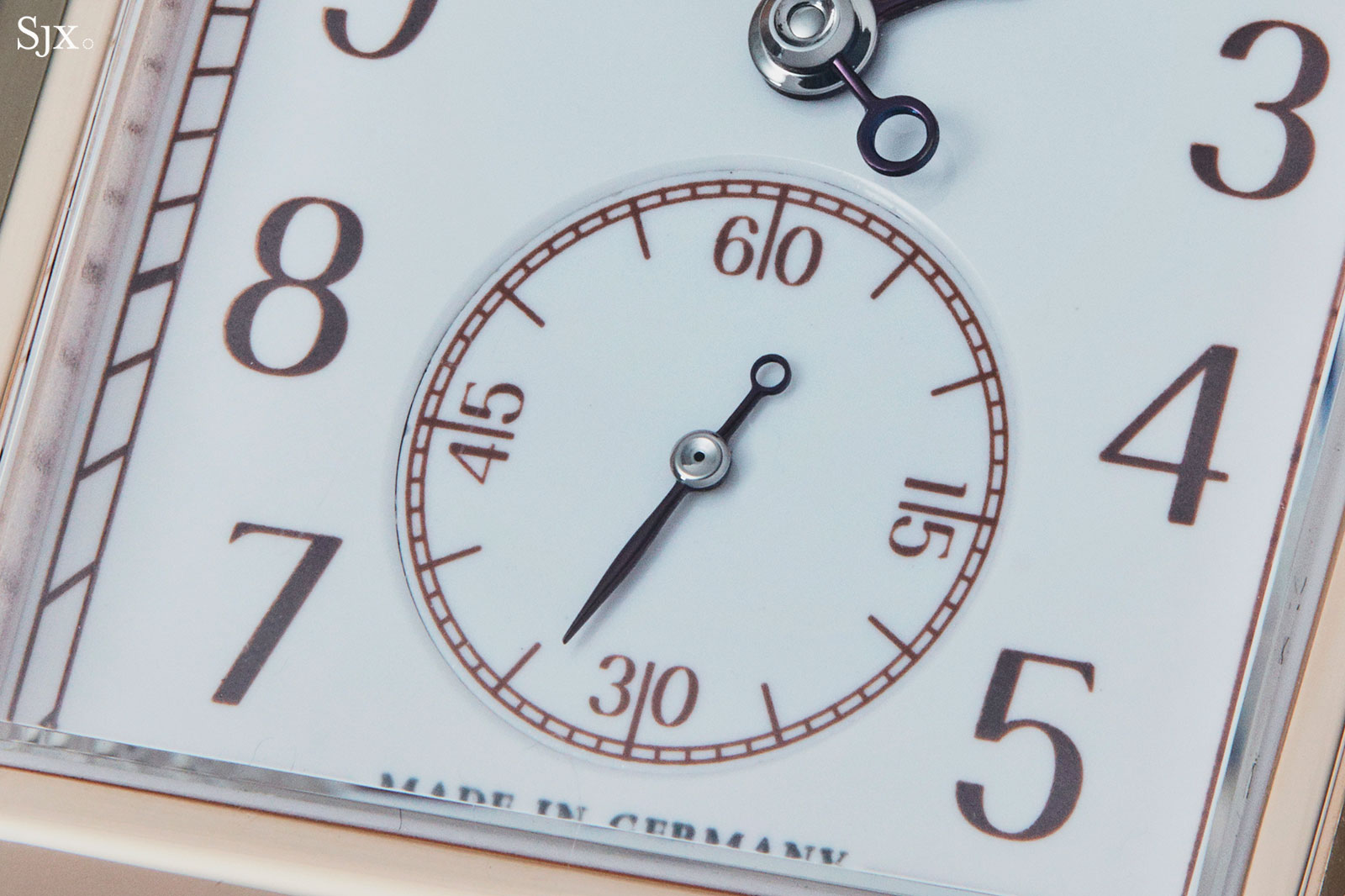 But regardless of dial type, the hands are all lovely. Moritz Grossmann has made of art of its hands, which are mostly hand-made with wonderfully rounded bodies and sharpened tips.

The hands are the black dial are merely polished steel, which is a bit dull. On the other dials, however, the dials are heat treated to a brown-violet that’s the brand’s signature. But all the dial styles also suffer from the Moritz Grossmann logo that looks incongruously modern against the classical overall design. The little arch over the logo brings to mind the Citibank umbrella logo, which is unfortunate.

As rectangular watches go, the Corner Stone boasts a movement that’s hard to beat in terms of construction and finish. The dials are handsome, but the case is an acquired taste.

Already available at Moritz Grossmann retailers, the Corner Stone is priced as follows, in euros and before taxes: