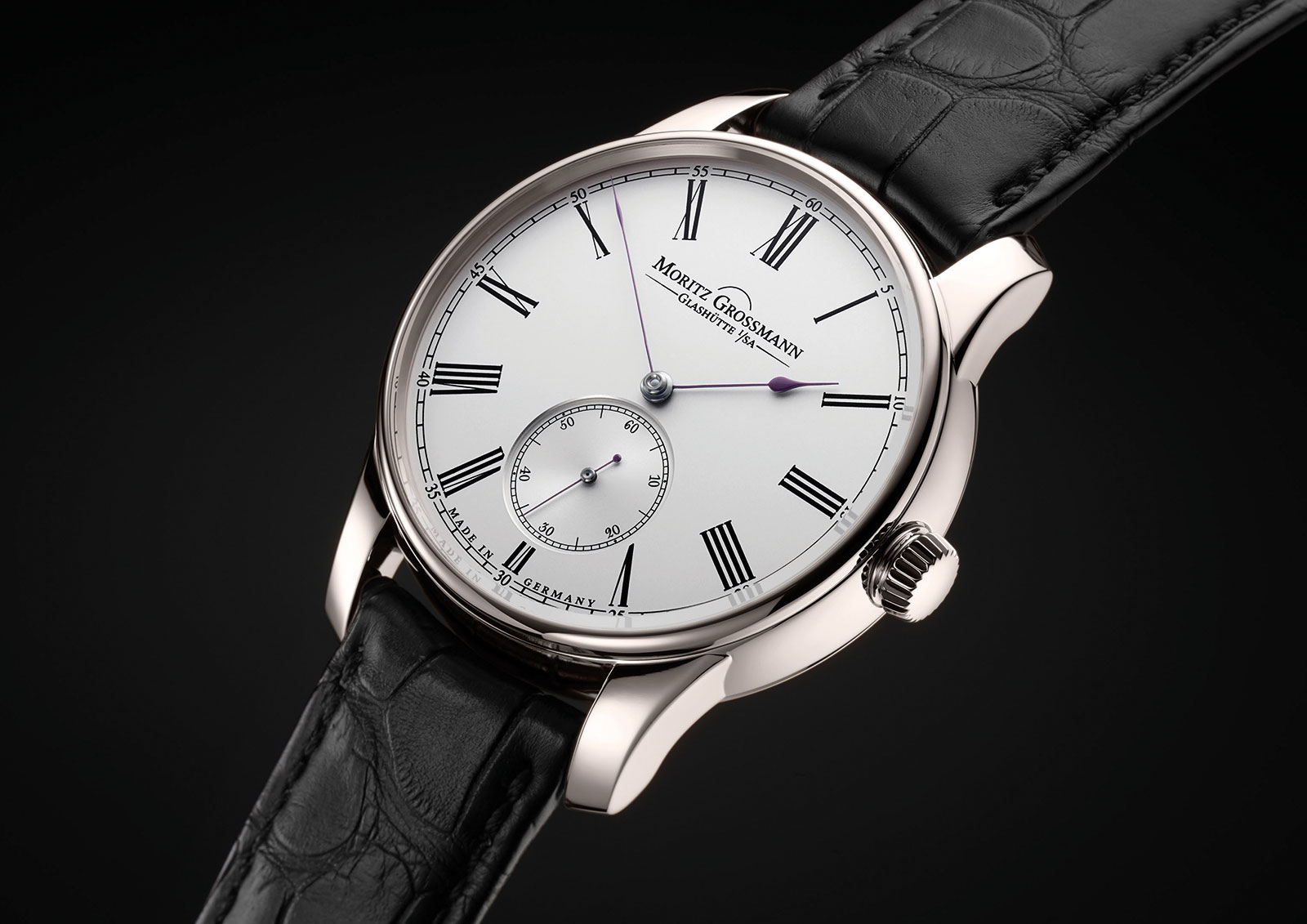 Announce last year but delayed because the movement needed tweaking, the Moritz Grossmann Hamatic has finally made it to market – and minus the unappealing dial cutouts found on the prototype.

The Hamatic is a self-winding watch that contains an unusual “hammer”, or “bumper”, winding mechanism that relies on a swinging weight to wind the mainspring. Similar mechanisms were invented in the late 18th century by several watchmakers, including Abraham-Louis Breguet with his Perpétuelle watch.

Moritz Grossmann took inspiration from these early automatics for the construction of the cal. 106.0 inside the Hamatic, creating the most interesting self-winding movement of late.

Although hammer automatics were historically inefficient, hence the predominance of rotor winding – and the reason for the delayed launch – Moritz Grossmann says the Hamatic winds as efficiently as an ordinary movement.

That’s because the centre of gravity of the hammer is far from its pivot, spanning almost the entire movement, or double that of an ordinary rotor. The result is increased leverage and torque, so even a five degree movement of the hammer winds the mainspring. When fully wound, the Hamatic will run for 72 hours. 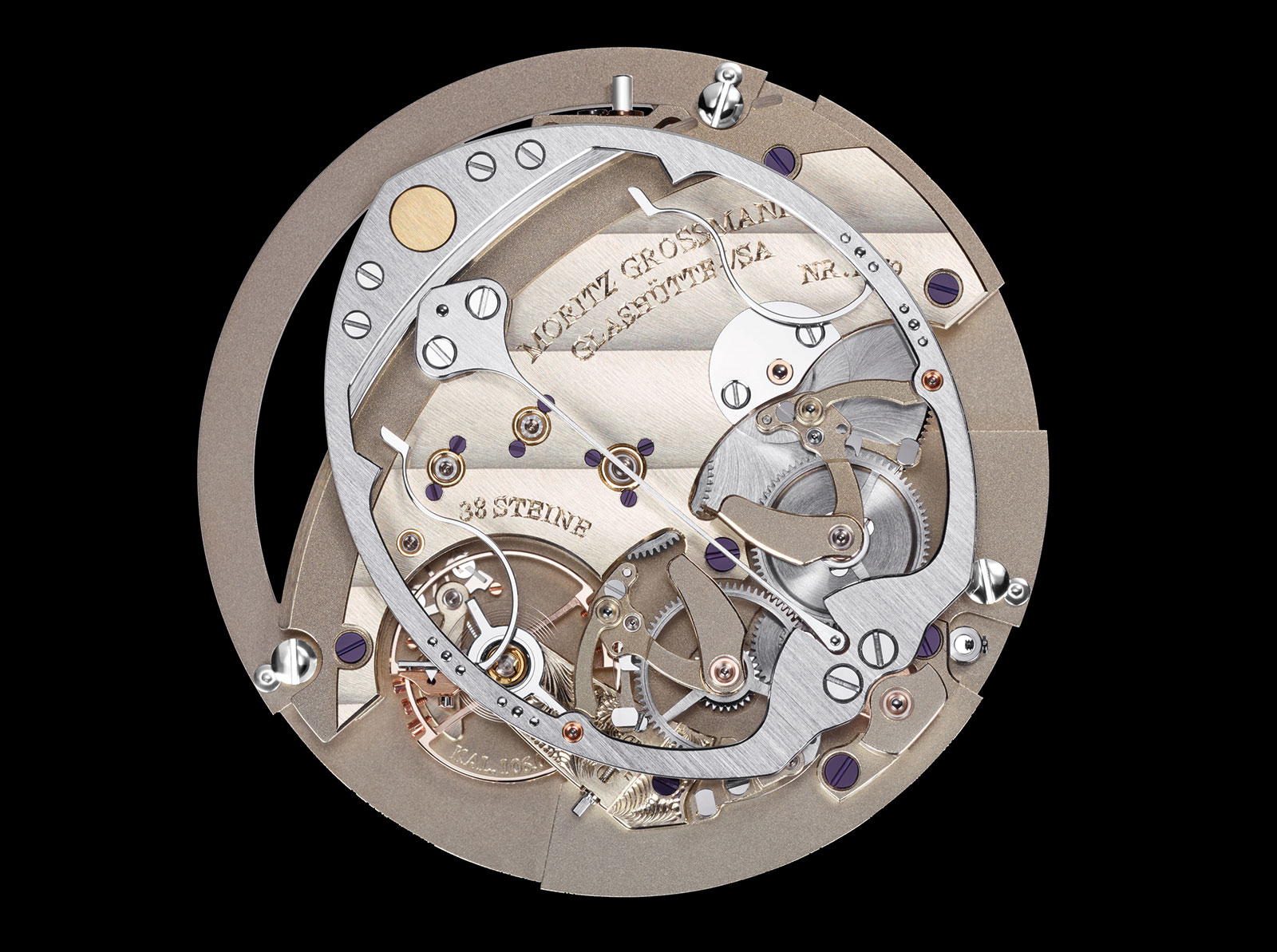 The hammer takes the form of large, oval frame with a circular, solid gold weight at its tip. It swings side to side like a pendulum, winding the mainspring in both directions via two pawls. Each pawl rotates its own click wheel, which in turn drive a reduction wheel that turns the barrel ratchet wheel.

Within the hammer frame sits two elegantly curved springs that act as shock absorbers, damping excess or violent motion of the hammer. 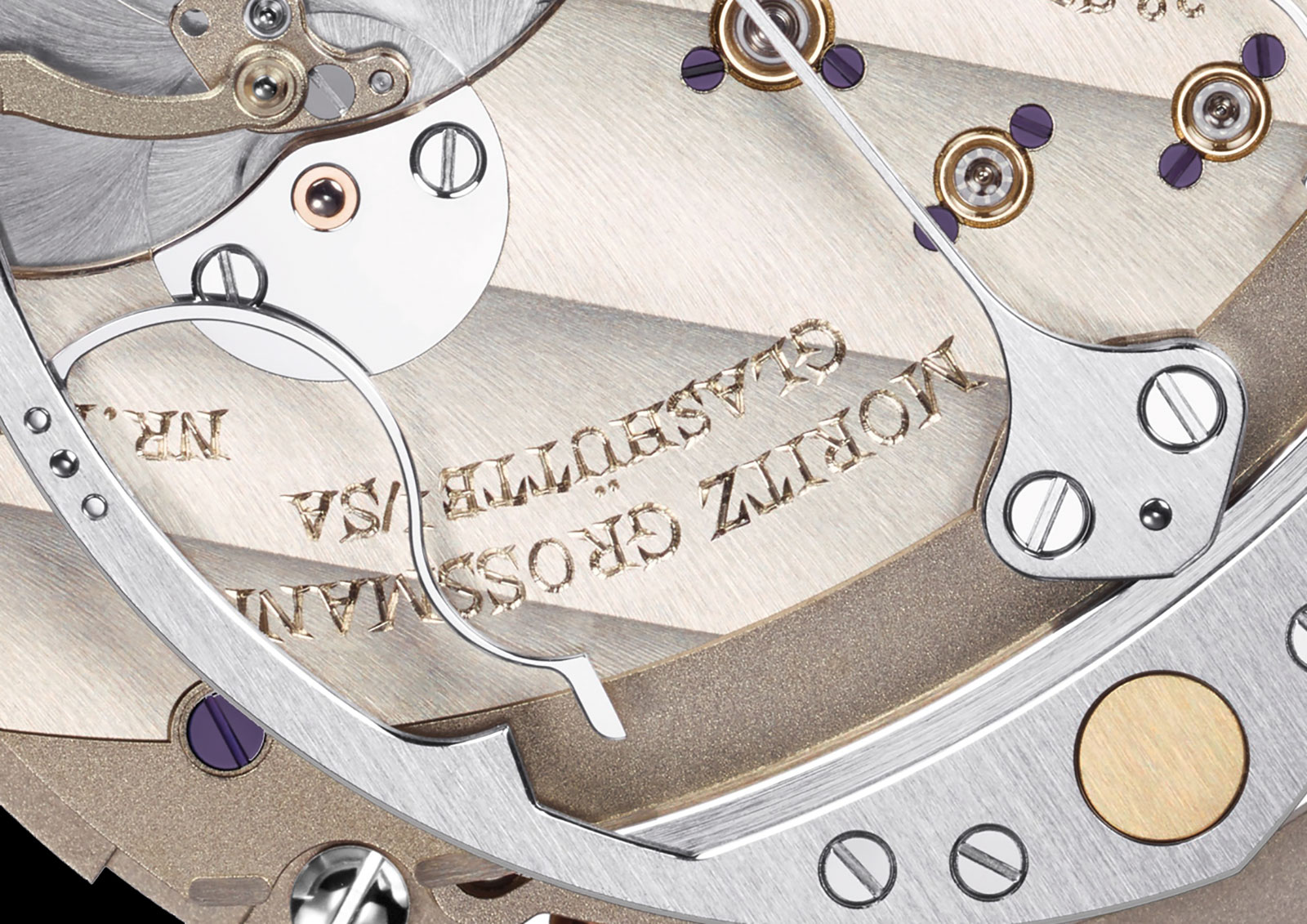 The solid gold weight at bottom right, with the shock absorbing spring to the left 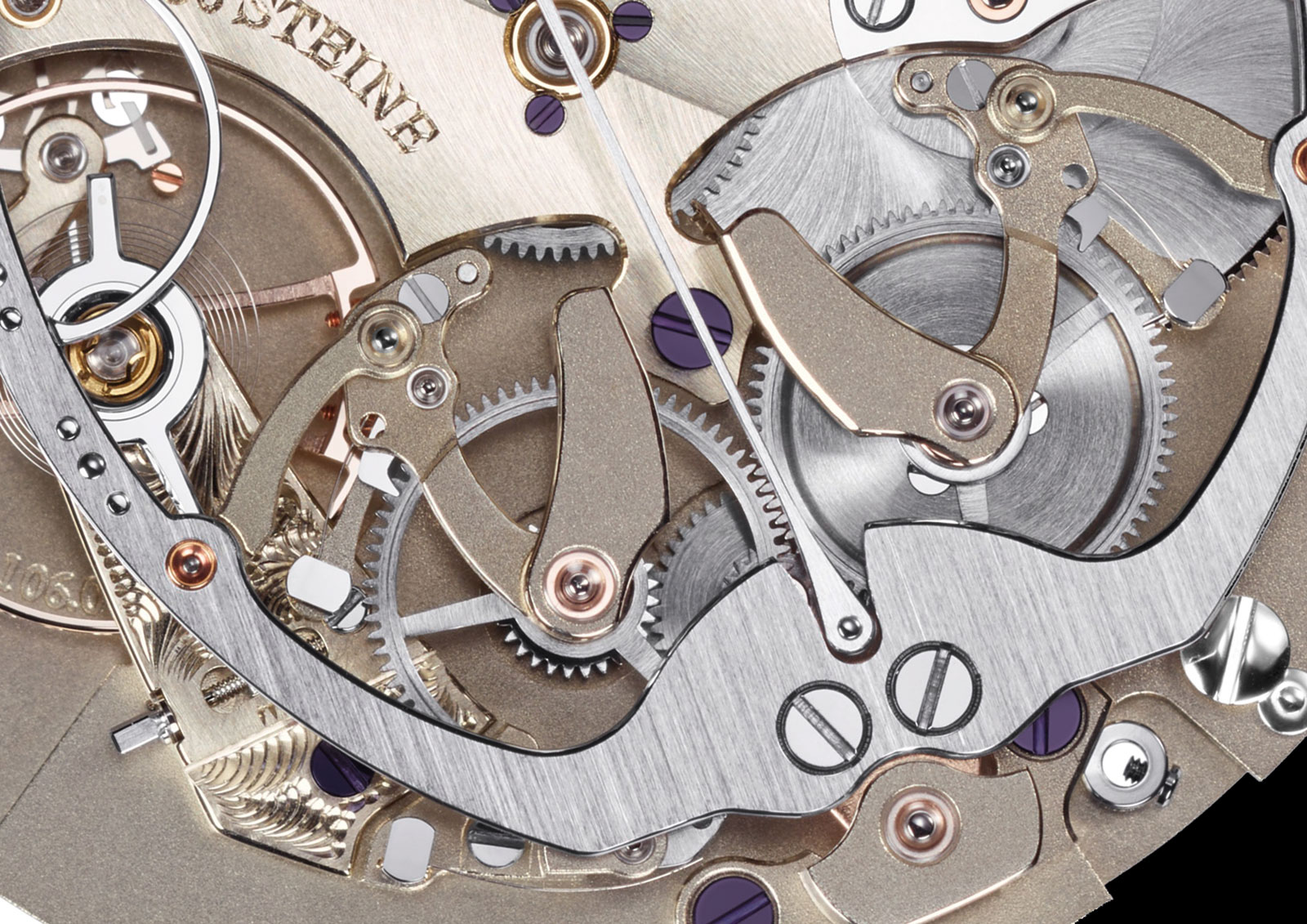 And like other Moritz Grossmann movements, the cal. 106.0 also has a hacking seconds that uses a lever to halt the balance wheel once the crown is pulled to set the time. It does not, however, have the patented button-operated release mechanism to restart the balance found on most hand-wound Moritz Grossman watches.

The whole movement is finished to the brand’s high standards, even the hammer, which has a straight grained top surface, as well as polished, bevelled edges.

Although the prototype from 2018 had a dial with apertures to show the movement of the hammer, Moritz Grossmann has smartly done away with that gimmick.

Conservatively styled, the dial is solid silver and based on 19th century Moritz Grossmann pocket watch dials. Though old fashioned it uses the company’s modern day logo, which is slightly out of place with the styling.

The hands are also inspired by antique pocket watches. Like all Moritz Grossmann hands, they are produced by hand and incredible delicate. Here they are spade-shaped, instead of the brand’s usual lance-shape, but the Hamatic hands are still heat treated to a brown-violet that’s the brand’s signature.

The case is identical in size to other time-only Moritz Grossmann models, measuring 41mm in diameter and 11.35mm high. 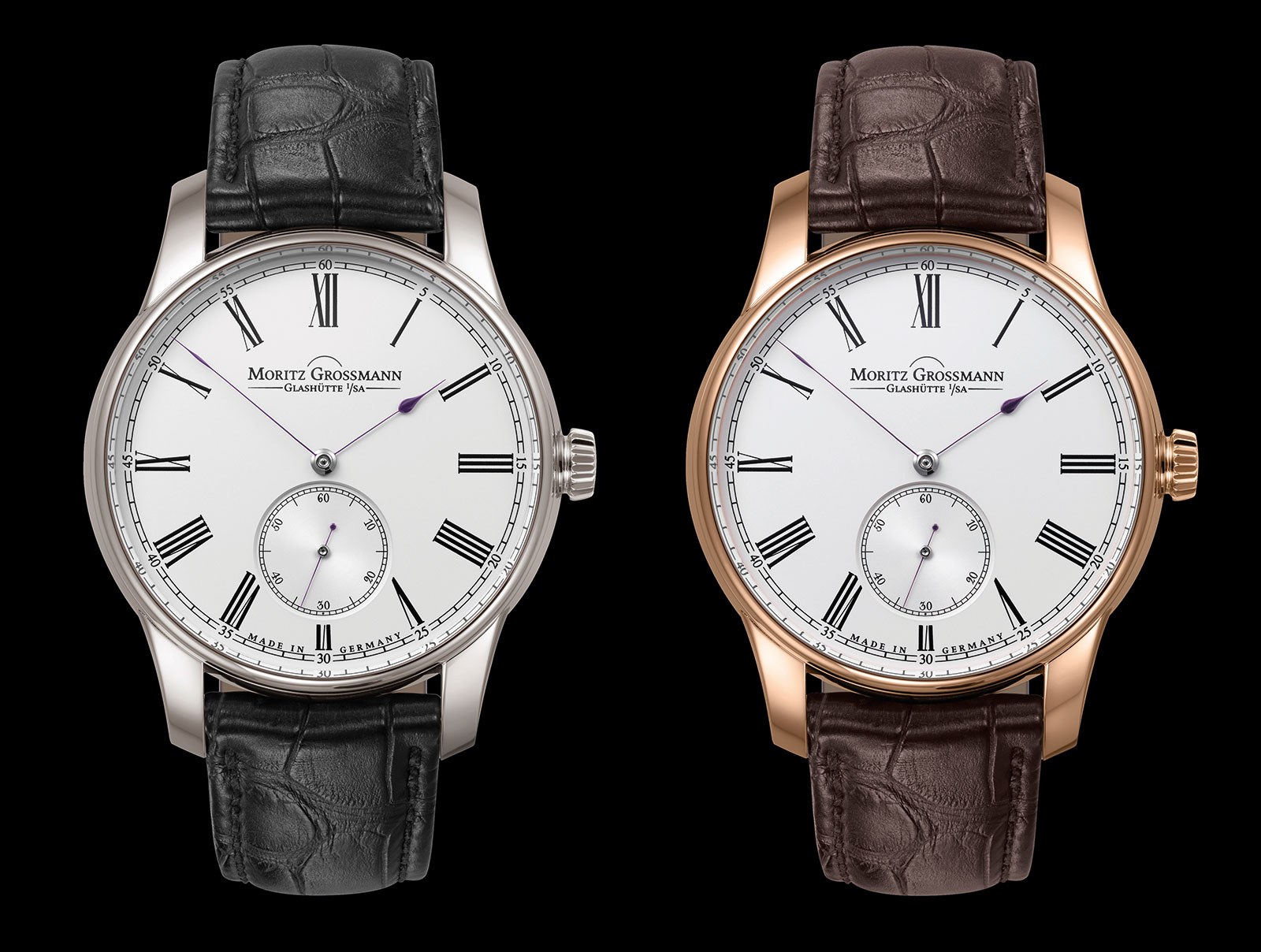