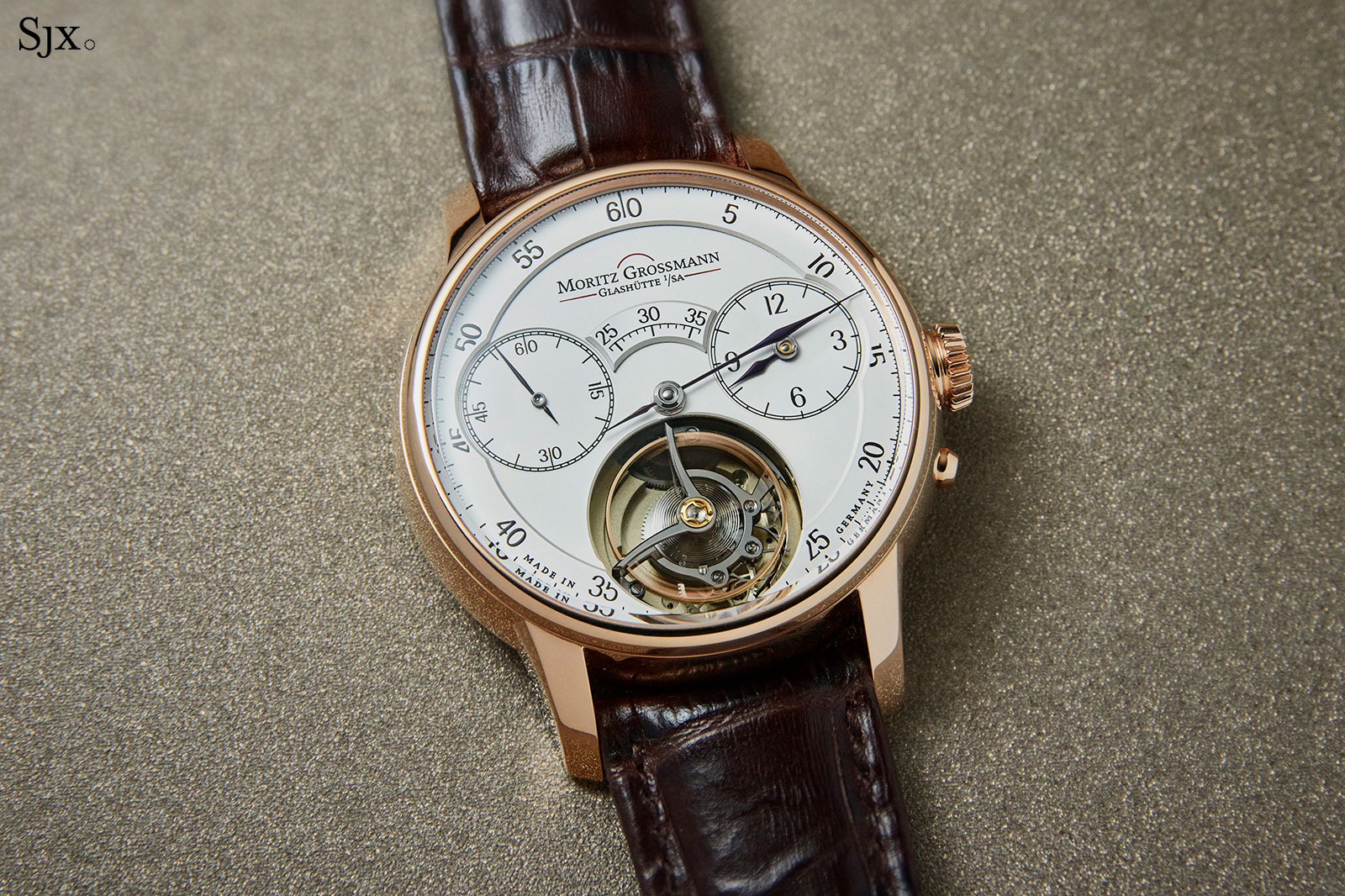 A revived name from the 19th century, Moritz Grossmann is now based in an impressive factory up a small hill behind the railway stop in Glashütte, Germany’s most famous watchmaking town. The company builds exceptionally high quality movements, even for its basic models, but naturally also for the top of the line Benu Tourbillon.

Oddly named after an Egyptian god, just like all of Moritz Grossmann’s other watches, the Benu Tourbillon a large watch with an unusual regulator-style display, powered by an equally large hand-wound movement with a flying, three-minute tourbillon that hacks (in the most unusual manner). The technical quality of the movement, in both construction and finishing, is outstanding. Considered one of the founding fathers of watchmaking in Glashütte, along with F.A. Lange, Julius Assmann and Adolf Schneider – the quartet founded the first four watch factories in the town in the mid 1880s – Moritz Grossmann produced pocket watches, which now form the inspiration for the modern day company’s movements.

The calibre 103.0 is familiar in its Glashütte style, with an untreated German silver two-third plate, clear jewels held in gold chatons, blued steel screws, and an engraved tourbillon cock. A notable and uncommon feature is the barrel, which sits in jewelled pivots on both sides, explaining why a jewel in a chaton sits in the centre of the barrel ratchet.

But its construction is similar to that of a pocket watch movement, with the relatively flat main and two-third plates held together by pillars, forming a sandwich that contains the gears in between. It’s an affectation, but an interesting one, and also used for all of Moritz Grossmann’s other movements. The movement is impressively sized on several measures. It’s a big movement, 38.4mm in diameter, though relatively slim at just 7.1mm high, though the watch itself is thick because of the case and dial construction. One reason for its size is the large barrel that gives it a three-day, or 72-hour power reserve.

Naturally the tourbillon is of the flying variety, a nod to the fact that Glashütte watchmaker Alfred Helwig invented the flying tourbillon in 1922. It is appropriately sized, with a minimalist V-shaped cage that’s 16mm wide containing a 14.2mm balance wheel that is Moritz Grossmann’s own design. It has elegant curved arms and six symmetrically positioned weights, giving it a surprisingly sleek and contemporary style.

Though its inspiration is historical, the tourbillon is unconventionally construction, with the hairspring sitting underneath the balance wheel. Though it’s visually imperceptible on the wrist, it is visible up close, and intended to leave the proprietary balance wheel unobscured. Although most of the movement is eminently traditional in finish and build, two unusual materials found inside illustrate the wonderful attention to detail in construction. The wheels of the gear train are made of an ARCAP alloy, a family of alloys that are non-magnetic, corrosion-resistance and stable at changing temperatures. That explains the silvery-grey colour of the going train wheels visible on the back.

The other unusual material inside is guaiacum wood, also known as lignum vitae. Native to the Caribbean, guaiacum wood is one of the hardest and densest woods known, and is also self-lubricating. English clockmaker John Harrison, famous for perfecting the marine chronometer, used the wood for the bearings and gears of his marine chronometers, and uses it for the brake ring on the fourth wheel arbor.

As a result of its size, the tourbillon moves at a relaxed pace, making one revolution every three minutes, compared to the conventional 60 seconds. Similarly, the balance runs at a leisurely 18,000 beats per hour. Nevertheless, that the large tourbillon can be stopped and restarted with only a brief lag for the balance to get up to speed is an impressive feat.

Pulling the spring-loaded crown – the crown springs back in instantaneously – hacks the movement by stopping the balance wheel. That also engages the setting mechanism; setting the hands is a satisfyingly precise and smooth affair. Pressing the button at four o’clock releases the balance and starts the movement.

The hacking mechanism is conventional in principle, essentially a lever that touches the balance wheel, but also peculiar and slightly gimmicky. Instead of the lever itself stopping the balance, the tip of the lever holds a tiny brush made of human hair. The default hair is blonde and comes off the head of Moritz Grossmann chief executive Christine Hutter, although the company can use a client’s hair as well.

According to the company, human hair has enough give that the tourbillon cage will glide past unhindered, but just the right amount of stiffness to stop the balance. That also means the balance wheel doesn’t stop instantaneously when the crown is pulled, instead taking a fraction of a second to halt. Despite its size, the movement is exceedingly refined, even down to its smallest details. All of the lettering on the two-third plate is hand-engraved with a fineness that is better than the average of watches in this price segment. The engraving on the tourbillon cock is equally well done. The decoration of the movement a spare-no-expense affair. The usual elements of high-end finishing are present and properly executed, including polished countersinks for the screws, chamfered slots and edges for the screw heads, polished bevels on the inside rims and spokes of the wheels, and the list goes on. Note the prominent polished bevels on the ARCAP wheels and the chamfering on the blued steel screws. The pillar of the movement is also visible just above the top edge of the engraved tourbillon cock.

All the steel parts are black polished, and bevelled by hand if so suited. That even includes the plate for the winding click, which boasts an impressive polished, bevelled edge despite its size and position. The tourbillon is equally well finished. The cage is entirely black polished; the bevelled and polished points of the “V” on the upper cage are remarkable, while the lower cage is bevelled and polished even on its inner edge. In fact, even the entire outer rim, and a section of the inner edge of the balance wheel where the weights sit, are bevelled. The watch on the wrist

The case is large both ways, 44.5mm weight and 13.8mm high. Like most Moritz Grossmann watches it feels chunky. It’s not helped by the case design, which has high, bulbous sides and wide lugs, as well as a mirror polish on all surfaces. With the movement almost incredible in its detail and quality, the case doesn’t quite live up to the standards set inside itself. An upside of the size is an eminently readable dial that is mostly functional in style, but also surprisingly distinctive on the wrist. The dial is also quite thick, being stepped and having three levels.

Although the regulator-style display takes a bit of getting used to, it is simple enough to read. The hours are on the sub-dial at three, while the minutes are in the centre.

Because the tourbillon is large enough that the minute scale is absent from the dial around six o’clock, Moritz Grossmann has installed a fan-shaped scale in between the two sub-dials, read together with the extended counterweight of the minute hand at times between 25 and 35 minutes past the hour. It’s a clever invention, although it clutters the upper half of the dial, especially with the large logo under 12 o’clock.

One element that detracts from the look are the cutaway minute numerals at the quarters, which result from the sub-dials and tourbillon aperture. They take away from the crisp functionality of the dial. While styling of the dial is unfussy, two elements on the front are outstanding. One is obvious, the tourbillon regulator, but the other is more subtle – the hands.

As with all Moritz Grossmann watches, the hands are made by hand. That allows them to have a remarkable, three-dimensional shape with a rounded top and sharply pointed tip, and their centres have mirror polished countersinks and edges.

The hands are also heated to a brown-violet colour that’s a Moritz Grossmann trademark. It’s achieved via a flame heating process similar to that for the more common blued steel, except the steel is heated to a lower temperature. The Benu Tourbillon is unquestionably impressive in mechanics and finishing, though its design isn’t for everyone. But its biggest enemy is name recognition; the other high-end watchmaker in Glashütte is a lot more well known, which means the Benu Tourbillon will only really appeal to a bona fide watch nerd who can comprehend all of its quality.