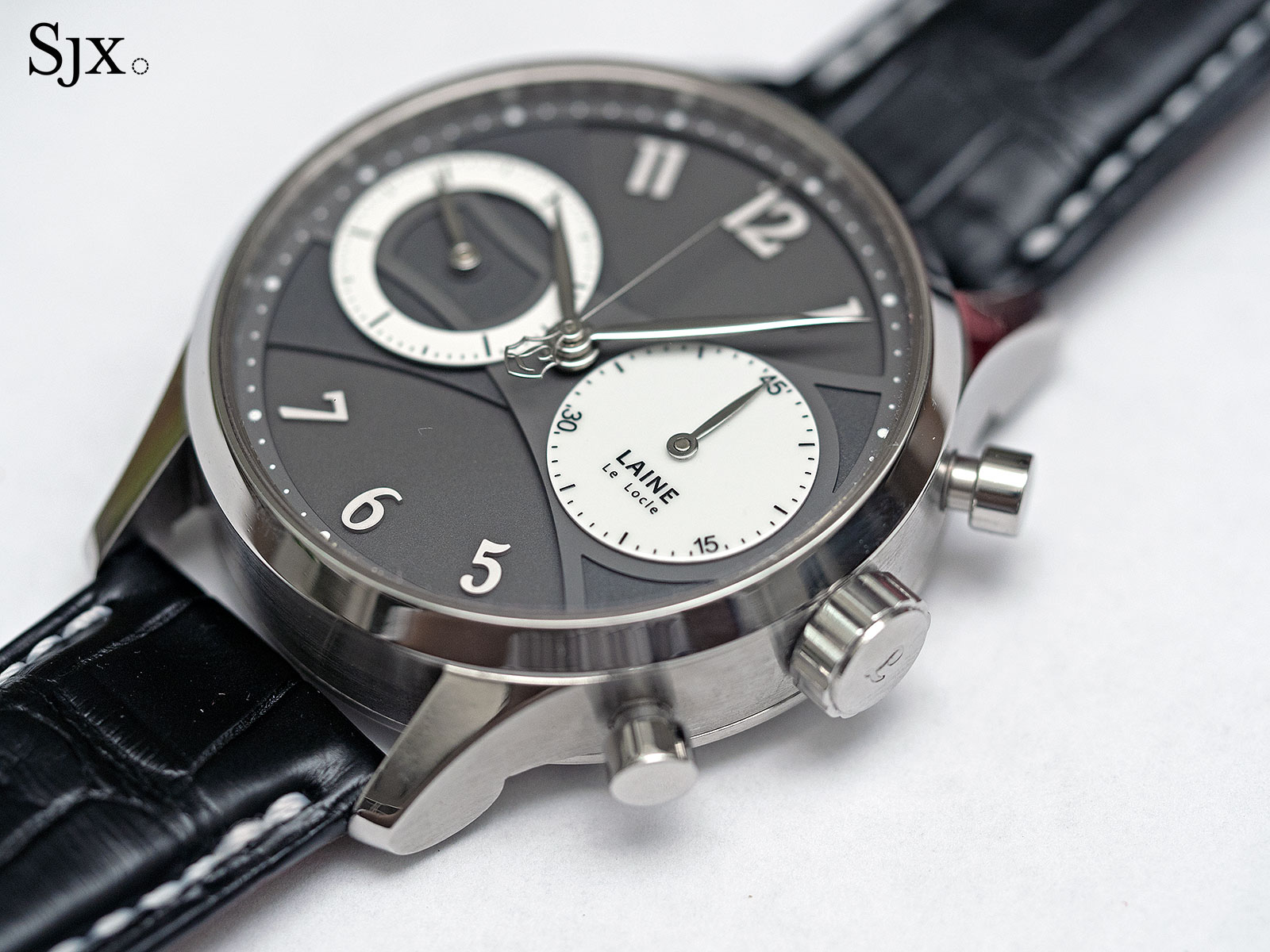 Despite the unexciting name, the recently announced Classic Chronograph is an impressive start for newly established Laine Watches. It’s a one-man independent brand established by Torsti Laine, a Finn who came to watchmaking late in life but nonetheless appreciates the finesse and quality of classic chronograph movements, hence the Valjoux 22 inside the Classic Chronograph. Forty four years old this year, Laine was a computer engineer who gave up his original profession to become a watchmaker in 2012. He learnt the craft at Kelloseppäkoulu, the Finnish School of Watchmaking (where Voutilainen got his start as well), before moving moved to Switzerland, along the way picking up A. Lange & Söhne’s annual prize given to promising new watchmakers.

Laine has great admiration for the classic chronograph movements of the mid-20th century, particularly the Longines calibres 13ZN and 30CH, as well as the Valjoux family of movements that spawned the Valjoux 23, 23 and 72. While he regards later chronograph movements as being less appealing, both visually and technically, he points to the modern day Lange Datograph and the Vacheron Constantin Harmony Ultra-Thin Grande Complication Chronograph as being exemplary movements. Such movements were the inspiration for the Classic Chronograph, which is equipped with a heavily reworked and upgraded Valjoux 22. Laine chose the Valjoux 22 over its more common Valjoux 23 cousin for its larger size. At 31.3mm in diameter, the Valjoux 22 allows more of the movement to be seen, and also fills up a modern watch case better.

Laine’s goal was to redesign the Valjoux 22 to make it more beautiful, with chronograph movements from the likes of Lange, Montblanc-Minerva, and Patek Philippe of decades ago, serving as role models. The result is a movement that looks like a vintage calibre, but with a significantly more elaborate chronograph mechanism, as well as the modern convenience of a shock-resistant balance. The Classic Chronograph begins as a vintage movement Laine acquires through deft internet shopping. He takes apart the movement, right down to its smallest constituent parts. While he retains most of the movement, he makes from scratch 38 components, primarily the most important bits, including the levers and springs of the chronograph mechanism, as well as the balance wheel and balance cock.

All 38 components are made from scratch, milled with a small CNC machine. He does all of this in his workshop, which inside his home in Le Locle, a historic centre of Swiss watchmaking that is home to Tissot, Zenith and Ulysse Nardin.

While the look of the movement is reassuringly traditional as well as pleasingly elaborate, the fact that relatively low-tech equipment is used to fabricate the chronograph levers leaves them slightly wider. Compare them to the movement inside the Lang & Heyne Albert von Sachsen for a sense of relative size. That, however, does not detract from the tremendous amount of work that is self-evident in the movement. To ensure the steel parts are strong but springy, Laine then hardens and tempers the parts with a technique he learnt from Voutilainen, where he worked for a spell. Now he performs the same processes in the kitchen of his home, heating the part until red hot and then plunging it into cool sunflower oil, doing the same for each of the steel components, one by one. He notes with a laugh that the tempering and hardening process tends to fill his kitchen with smoke.

Each component is then finished by hand, with particular care being lavished on the chronograph mechanism. Courtesy of a stint studying decoration at Lange in Glashütte that accompanied the watchmaking prize, Laine finishes the steel parts of the chronograph mechanism with straight graining, using sandpaper and elbow grease, exactly as it is done at Lange. Notice the long, pointed tailer of the spring at top, inspired by the arrowhead tail on Montblanc-Minerva movements Equal effort is applied to the polished bevels on the movement components, as well as the polished countersinks of the holes for jewels and screws. The bridges, on the other hand, are frosted via bead-blasting. The watch pictured is a prototype with varied imperfections, but it still manages to convey the degree of effort put into the movement decoration. Unlike the reassuring classicism of the movement, the dial of the Classic Chronograph is modern, illustrating Laine’s intention to show contrast between front and back. At 1.5mm high the dial is extremely thick, being two to three times the thickness of ordinary dials, in order to accompany the multi-level design Laine conceived himself.

Both chronograph sub-dials sit on raised plates on the dial, while all numerals are applied. The look might not appeal to traditionalists, but Laine offers a high degree of customisation in terms of the dial colour and design. For that he relies on Comblémine, a dial maker owned by Voutilainen. The case of the Classic Chronograph is large, being 40mm in diameter and 14.1mm high. The size of the watch is significantly larger than is typical of a classic chronograph, something that is accentuated by the case design, which has high, flat sides. That being said, the Valjoux 22 inside is large enough that is fills the case properly, providing a view from the back rarely found on modern watches that tend to have small movements in large cases. Laine’s inaugural wristwatch is not perfect, but it is very, very good. It demonstrates that a lone watchmaker, who not too long ago was still an IT engineer in Helsinki, can produce a top class wristwatch.

The Classic Chronograph is a limited edition of 10 pieces in stainless steel, priced at SFr19,000. They can be had direct from Laine Watches.