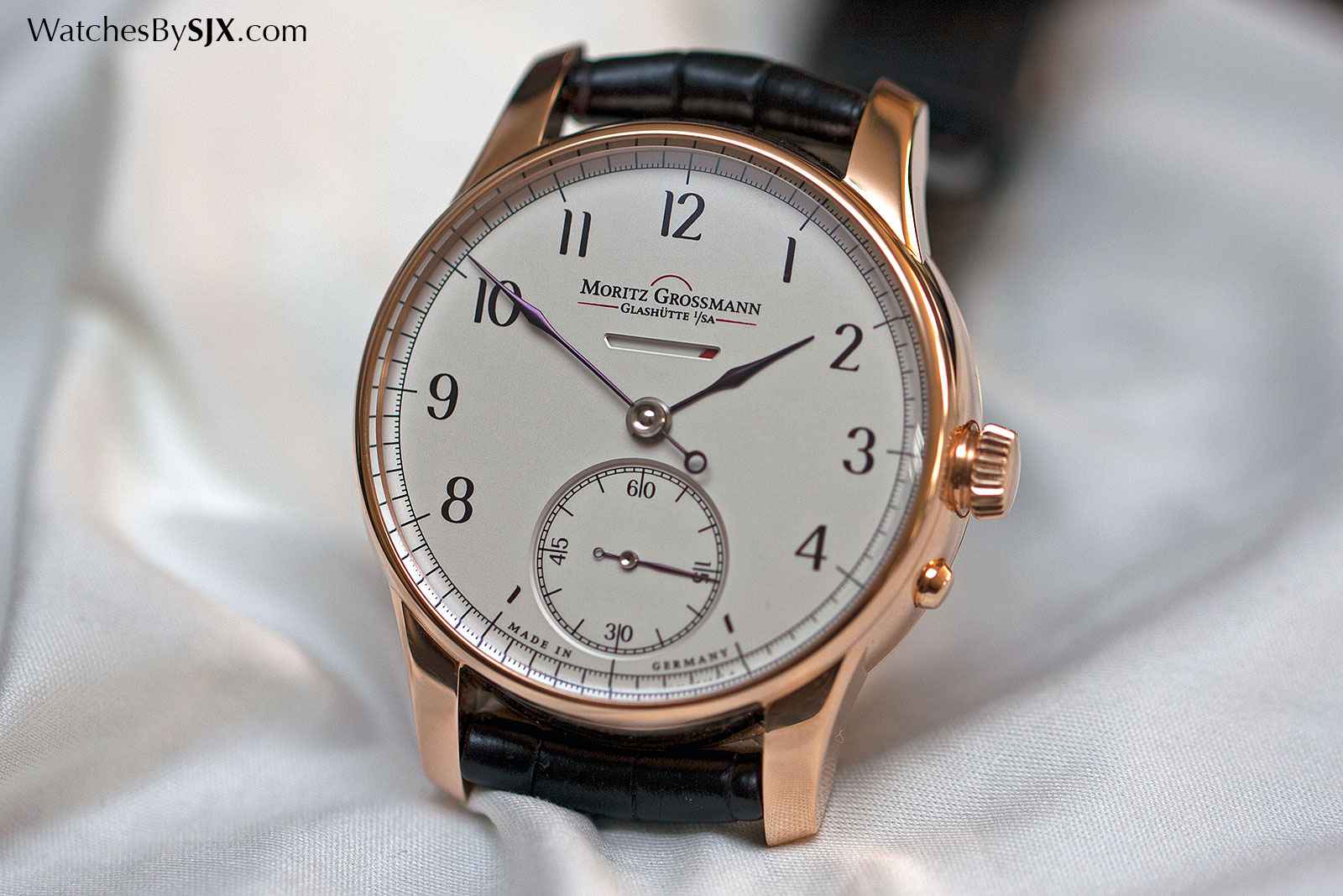 Like many other watchmakers in Glashütte, Moritz Grossmann is a resurrected name. Grossmann was a 19th century watchmaker who, along with Ferdinand Adolph Lange, Johannes Dürrstein and Julius Assmann, was one of the major figures in Saxon watchmaking. Grossmann’s namesake firm did not survive him, while the other names were decimated by conflict and the Cold War in the 20th century.

Moritz Grossmann was revived in 2008, staffed by many alumni of A. Lange & Söhne. Chief executive Christine Hütter was formerly a watchmaker at Lange, while its movement constructor, Jens Schneider, was one of those responsible for the Datograph and Sax-O-Mat. Grossmann is owned by Hutter, and financed by two investors, who obviously have deep pockets (while grants from the European Union and local government also helped). Grossmann is a tiny brand, but not quite as small as it seems.

Though it makes only about 200 watches a year, by comparison A. Lange & Söhne makes about 4000 while F.P. Journe some 900, Grossmann employs a surprisingly large staff of 45. Only a quarter are engaged in administration, marketing and other roles unrelated to production of watches. That leaves 30-something employees dedicated to making the watch, specially the movement and hands (the case and dial are outsourced). The attention lavished on the watch is evident in the product.

An old German name, and an even older Egyptian one

Grossmann’s first wristwatch was the Benu, named after the Egyptian deity of rebirth Bennu (all of its watches are named after Egyptian gods, including Tefnut and Atum). It was a simple, time-only wristwatch, and made as a limited edition. Subsequently, the Benu Power Reserve was added to the line-up as a regular production model. It features a linear power reserve display, and more unusually a pushbutton hack seconds release.

The dial and wonderful hands

Like many other comparable watches, the Benu distinguishes itself not by design, but in its details. The overall look is classical, though the power reserve adds a modern, perhaps overly modern, touch. The dial is simple, with large Arabic numerals that have an interesting font that’s unusual at first but grows in appeal. Made of solid silver, it is thick, evident from the recessed seconds sub-dial. Up close, the printing on the dial is not especially sharp, something’s that evident in the logo at 12 o’clock. In contrast, the hands seen up close are exquisite. With the rough form cut via spark erosion, each hand is then hand finished, polished and rounded, giving it a substantial yet elegant form. Notice how they taper to a narrow point, with the minute hand having a gentle curve that the tip that’s done by hand with a tiny rolling pin. Despite their size, the hands are mounted extremely close to the dial, most obviously with the minute hand, a detail that boosts the impression of quality.

It’s not just the form that impresses, but also the colour. Steel changes colour as it is heated due to oxidization of its surface. Blue is the most common colour employed for blued steel components in watches. Grossmann has instead elected to heat the steel parts (hands and screws) to a brown-violet tone that is uncommon, intriguing and beautiful. This colour requires heating the part beyond the temperature typically used to achieved blued steel. And because each hand is heated individually over a flame, the resulting colours are variable, so each watch requires a set of hands (hour, minute and second) that are carefully matched for colour. Seemingly black when viewed from a distance, the hands only reveal their dark brown colour up close, along with a hint of purple at certain angles. Once the colour of the hands is observed, then it becomes apparent that the numerals are the same brown-violet shade, instead of black as they initially appear.   Another appealing detail is the cap on the central hole of the hands where they are mounted on the pinion. Made of steel, this cap is mirror polished and beveled on its edges, giving it a gleam that accentuates the dark colour of the hands. The simplest element of the exterior is undoubtedly the case. It’s 41mm in diameter, moderately sized by modern standards but tending towards the large end for such a simple watch. Polished all over, the case is thick and feels substantial, while the lugs are fairly long. A slightly domed sapphire crystal is fitted on top, one that ends in a tiny bevel on the edge where it meets the bezel. It’s a pleasing detail, though one that makes the crystal prone to chips. Like many other high-end watchmakers in Glashütte and Dresden, the inspiration for Grossmann’s movements comes from 19th century pocket watches. The calibre 100.2 inside the Benu Power Reserve is almost a miniaturized pocket watch calibre, but like the hands it reveals a surprising and impressive degree of quality up close. It’s immediately obvious the movement is constructed with the traditional rule of thumb in mind – both the balance wheel and barrel are almost the radius of the movement, in other words, they each measure about half the diameter of the movement. The two-thirds plate (such fractions are semantic, the plate essentially covers everything save the balance and escape wheel cock) is made of German silver, with all the lettering on it engraved by hand. The engraving is finely done, with the characteristic sharply defined serif font of such hand engraving. Also hand-engraved are the balance and escape wheel cock, both made of steel and covered with fine curlicues. Interestingly the regulator index on the balance cock is a micrometer index, with a lateral screw that can be adjusted to regulate the watch. Running at 18,000 beats per hour, the balance wheel is made in-house and of a proprietary design, with poising screws on two recesses on opposite sides of the rim. Because the screws are recessed, the balance wheel can be extremely large, taking up as much space as it physically can. As is expected for a watch constructed to such traditional chronometer principles, the hairspring has an Breguet overcoil. Like a pocket watch the bridge and base plate are held together by pillars (a similar construction is found in the new Ferdinand Berthoud FB 1 tourbillon), with the gear train sandwiched in between.  Instead of red rubies, the jewels are white sapphires, resulting in the movement having an oddly pale colour scheme, especially when combined with the gold-tinged German silver. Three of the jewels are secured by large chatons that are made of solid gold, raised, countersunk and polished. Like the hands, all the screws for the chatons and the rest of the movement are brown-violet steel. Arguably the most beautiful detail of the movement is the winding wheel and barrel ratchet, as well as the winding click. The ratchet is covered with a triple solar finish, essentially three concentric spirals, and a joy to look at. Equally beautiful is the black polished winding wheel, a treatment that is also applied to the winding click. Both wheels have beveled and polished teeth that are just fantastic up close. Not many watches, especially in this price range, have teeth finished like that. However, there are two areas of the movement that can be improved. One is the anglage, or polished bevel on the edge of the two-thirds plate. It is narrow and difficult to distinguish, in contrast to the wide, mirror-finished bevels that Philippe Dufour, Voutilainen, and even Seiko with the Eichi II, have popularised. The other area is the base plate beneath the balance wheel, which has a simple frosted finish instead of the circular graining that is the norm in modern watchmaking. That being said, both of these details are in keeping with the pocket watch style of the movement; in 19th century pocket watches the finish of these parts was similar. Modern watchmaking, however, has taken that further, and Grossmann should incorporate the best of contemporary finishing.

Though the movement is distinctly antique visually, it does have two modern innovations. The first is the power reserve that is driven by a planetary gear under the dial. This is linked to the gear on the back that is adjacent to the balance cock. At full wind the power reserve indicator is white, gradually turning red as the barrel winds down. More interesting is the hack seconds. When the crown is pulled to set the time, it does not stay out as in most watches. Instead, pulling the crown brings it to time setting position, even though it springs back. A quick pull of the crown means the time can be set, but the seconds hand remains frozen in place. That’s where the button at four o’clock comes in. This button starts the second hand once the time is set, ensuring that the time can be set precisely. Most, in fact the majority, of watches, have sufficient play in the gears that pushing the crown back in after setting the time will move the hour and minute hands ever so slightly. A nifty solution, the pushbutton release eliminates this problem. While it does seem like an answer to a question no one asked initially, the button is useful and functions with a crisp click. Visually, however, the button is probably the least attractive element of the design, being reminiscent of the power reserve button on Seiko Kinetic watches.

The Benu Power Reserve is priced at €26,800 in rose gold, €27,800 in white gold, while the platinum version is €36,800. That is a hefty sum of money, but relative to watches in the same price range from the likes of Lange as well as Lang & Heyne, the Grossmann Benu compares favourably.